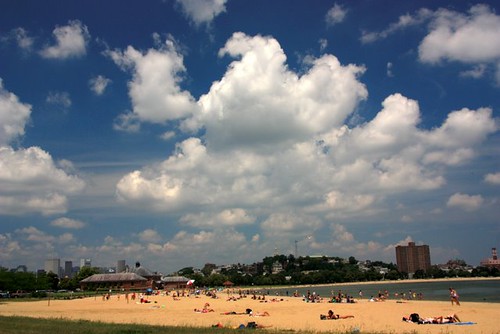 The bad news: It’s going to be hotter today than a pot full of lobster. The good news: You can swim off just about any beach in Boston without having to schedule a tetanus shot first — at least, if you choose your beach wisely. That’s according to information compiled by the National Resources Defense Council and the Mass. Department of Public Health, which found that our beaches are actually relatively clean. In some city beaches, the dirty water from the famed song now exists only in said famed song. Huzzah!

So enough with the suspense. If you’re looking to take a dip and minimize your risk of picking up a bacterial infection, or pathogen, your best bet is Carson Beach in Southie. This beach, near the bathhouse, is sampled daily, and less than 5 percent of water sample exceeded national standards last year, according to the NRDC. In fact, it’s just 1 percent, according to the Mass. Department of Public Health.

Of course, “clean” is a matter of negotiated politics and regulations, rather than, say, cleanliness. For instance, national standards for water pollution place the acceptability line at one in 28 swimmers getting sick after swimming. That’s how we define clean. Add a second sickened swimmer, and everybody out of the water! It’s also worth noting that the DPH tests water at off-peak hours (to ensure the daily sample can get to the lab, so they say), so real time bacteria counts might be higher.

Here’s a little sample of what you might expect if you come down with something, courtesy of the DPH.

Anyway. Returning to my original point, it’s hot as balls out there today and it’s summer, so it’s probably going to happen again. Here are a few things to keep in mind when choosing when (or if!) to swim.

1. Don’t swim after a rainstorm. Runoff from city streets picks up all kinds of nastiness, and gravity deposits it right into the coastal waters. Wait until 24 hours after rain, or set up a portable decontamination station (business idea!).

2. Don’t swim when a lot of other people are swimming. Simply stated: More people, more fecal matter. Do what the DPH does and take your dip before noon, after which time beaches tend to fill up. Or, make it an early evening swim.

3. Avoid spring tides. Spring tides are the unusually large tides that occur at full and new moon phases. A recently study in Southern California found the highest levels of bacterial contamination when the spring tide is going out, probably due to extra nastiness picked up in the usually dry sand.

4. Avoid lowest tide for that matter. Enclosed beaches, like Pleasure Bay in Southie and Malibu Beach in Dorchester have slightly higher contamination rates (7 and 6 percent, respectively). For best results, wait until those areas refresh water (when high tide is approaching) to swim there.

5. Don’t let your kids muck around in the wrack line. That’s the tidally deposited line of seaweed and plant material that’s warm, moist, and basically an ideal Petri dish for bacteria. And, this should go without saying, don’t swim where boats are illegally discharging their sewage holds, which is almost too gross to think about.