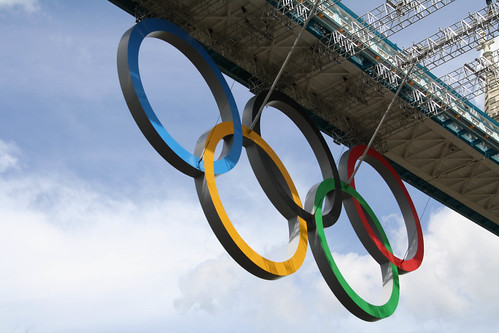 If we were to award medals to Boston-area universities for the number of competitors they sent to this year’s Olympic games, Harvard would win by a landslide. Harvard has nine athletes and one coach representing the Crimson in London, for a total of 10 Olympic participants with Harvard ties. However, only one of them is a current-student athlete. That’s Temi Fagbenle, class of 2015, who’s representing the host nation in women’s basketball.

Boston University would take silver. The Terriers sent five athletes (former and current) and one coach. Although they’re representing six countries in three sports, none of them will be competing for Team USA.

Tufts would walk away with bronze. There are three Jumbos — two former student-athletes and one current med school student — in London for the games.

Boston College, Northeastern, and Brandeis each sent one alum to compete. MIT sent none.

In total, 20 athletes and two coaches are representing Boston-area universities this year — not a bad showing, but not as many when compared to the numbers posted by the University of Southern California. With 40 athletes and seven coaches in London, the Trojans have more than double the number of Olympic representatives than all of the Boston-area universities combined.

With 47 athletes and coaches in total, USC boasts the highest number of Olympic participants of any college or university in the United States, public or private. 417 Trojans have competed in the Olympics since the games began in 1896. Together, they’ve captured an astounding 267 medals —124 of which have been gold. In fact, if USC were a country, its gold medal count would rank it 12th in Olympic history — ahead of Japan, Russia, and Finland.

That’s pretty amazing. But for an powerhouse better known for its brains than its brawn, Boston has a solid showing of competitors in the five rings this year.