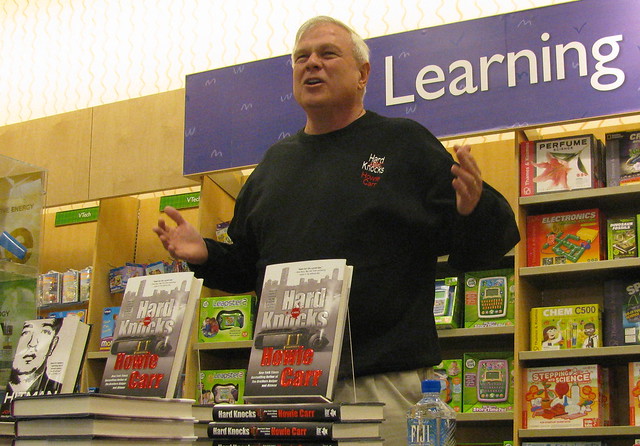 Yesterday, I poked some fun at Howie Carr’s inept defense of Mitt Romney’s 47 percent line. It turns out, though, that faulty logic wasn’t his only problem in that column. In my post, I cited a quotation that Carr included in his piece, attributed to Alexis de Tocqueville. The quotation, as Carr used it, reads:

But WBUR political analyst (and eagle-eyed reader) Todd Domke noticed something amiss. He emailed me last night to say that the quote seemed anachronistic for de Tocqueville and that, after a little research, it didn’t appear to be from the French writer at all.

So, if not de Tocqueville, whose quote is it? Some Googling will turn up attributions to Alexander Fraser Tytler, an 18th Century Scotsman. Interestingly enough, that attribution is contested as well. Nobody seems quite sure where the quote actually came from in the first place—not even the guy who edited the Yale Book of Quotations. The earliest attribution to Tytler he could find was in a 1951 Daily Oklahoman story, which ran 138 years after the Scotsman’s death. Not exactly reliable. The origin of the quotation remains a mystery.

Climbing inside of Howie Carr’s mind is a dangerous game, but the best guess for how he came to include the apocryphal quotation in his column is that he might have picked it up from U.S. Representative Allen West, who, the day before Carr’s column ran, cited it in a commentary for MarketWatch, attributing it to de Tocqueville. That same day, the quotation, again attributed to de Tocqueville, also made an appearance on the conservative website, The Patriot Post, another possible source. For what it’s worth, Wikipedia says (and when has Wikipedia ever been wrong?) this is one of those infamous email forward quotations and that it’s been making the rounds for about a dozen years now. So Carr might have found it in his inbox.

Interestingly, Carr clipped two parts of the fake quote that appeared on those other sites, and in pretty much every other version of the quotation I found. I’ve put the fuller version below, with the parts Carr omitted in bold:

“A democracy cannot exist as a permanent form of government. It can only exist until the voters discover that they can vote themselves largesse from the public treasury. From that moment on, the majority always votes for the candidates promising the most benefits from the public treasury with the result that a democracy always collapses over loose fiscal policy, always followed by a dictatorship.”

Yowza! Those parts weren’t exactly serving Carr’s purpose, so he apparently got rid of them. Put it all together and it appears that Carr included in his column a selectively edited, very likely apocryphal, definitely incorrectly attributed quote. If that’s not the height of Howie Carr-ness, I don’t know what is.

Big thanks to Todd Domke on this. If you’re looking to get ready for tonight’s Brown-Warren debate, his scorecard is a good place to start.