Mitt Romney: Even Less Popular in Massachusetts Than Before
Subscribe
Follow
I'm a scraper
This search result is here to prevent scraping

Mitt Romney: Even Less Popular in Massachusetts Than Before 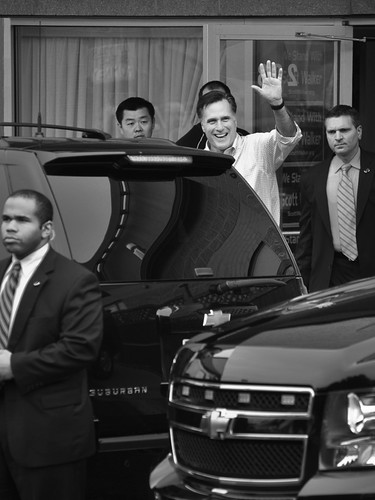 Mitt Romney Does the SUV Hustle by Madison Guy via Flickr

In our October issue, I write about how ridiculously unpopular Mitt Romney is in Massachusetts, reasoning that the same traits that caused him to alienate voters here could very well undo his presidential campaign. I got one thing wrong, though: Romney is even less popular in our state than I thought he was. At the time we went to press with our issue, polls showed him trailing Obama by around 15-20 points in Massachusetts. Now that number is closer to 30. A poll conducted by WBUR and MassInc from September 26 to 28 has the race as 60-32 for Obama in Massachusetts, while a just released Globe poll puts it at Obama 57, Romney 30.

Similarly, at the time we went to press, the most current poll available—a MassInc one from July—had Romney’s unfavorable rating in Massachusetts at 52 percent. In this more recent MassInc WBUR poll, that number increased to 59 percent. The Globe poll pegged Romney’s unfavorable rating at 60 percent. So Romney has actually gotten significantly less popular in Massachusetts over just the last few months.

It’s a pretty safe bet that the reasons for Romney’s continued swan-dive here largely mirror those for his recent drop nationally (he got caught on camera saying something or other about 47 percent of people, didn’t he?). But I do think that when people here see some of the more shameless tactics of his campaign—the false welfare ads, jumping ugly on the attacks in Libya—it reminds them of the same do-anything-to-get-elected pragmatism that caused Romney to flip-flop on many views while he was governor, and then basically check out for the second half of his term. In other words, the more Romney’s campaign goes on, the more it may be reminding Massachusetts residents of what they originally came to dislike about him.

The Obama campaign seems to be trying to export that bad feeling. This morning, the Globe’s Callum Borchers reports that, in the last four months, it’s featured a lineup of around 25 current and former Massachusetts officials at over 100 events. Meanwhile, 11 Massachusetts Democrats who served in government while Romney was governor here will be hitting the trail this week for Obama, visiting nine swing states. As the race heads toward November, that’s a trend that I believe we can safely expect to continue.