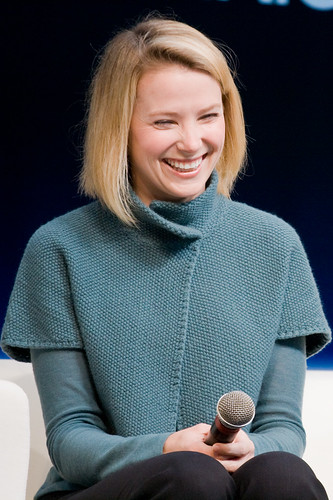 On Sunday, Yahoo CEO Marissa Mayer gave birth to a baby boy, and after the congratulatory tweets rolled out across the Twittersphere, the knives came out everywhere else.

At issue is Mayer’s decision to work right up until the birth of her son Sunday night and go back to work a mere week from now.

Joanna Mazewski at Babble says this is bad news for her child:

Now, while I understand that she has some pretty big shoes to fill as being the head of a company like Yahoo, having less than two weeks to spend with your baby as a new mother just plain sucks. Sorry, but no salary or quest for equality is more important than being with your newborn child when they need their mother the most.

Commenters at UrbanBaby.com are also weighing in, and it ain’t pretty. One writes:

She has no CLUE what she is getting into. This is terrible. If it had been her second or third child, I’d say YEAH!, she knows what it’s like to have a high pressure job and a baby. Now, it could be a complete disaster…she could just fold like sooo many first time moms in high pressure jobs.

But others don’t see what the big deal is.

I’m no CEO but I have been on two maternity leaves and here’s a confession that might make you feel better: I worked through both of them, too. It’s what successful women do.

The debate about what women can and should do with their work, skills, and ambitions once a baby comes along never ends because we haven’t found a good solution to the problem of wanting or needing to be in two places at one time. It’s messy, but isn’t the best of life?

To me the greatest gift of parenting has been learning to appreciate the mess. As my children grow as high as my chin and talk to me in complete sentences, even sometimes spontaneously clean their rooms, I think back on the hardest moments of their early years and feel the resonance of Sigmund Freud’s famous quote: “One day, in retrospect, the years of struggle will strike you as the most beautiful.”

There will be times when Marissa Mayer will want to soothe her crying baby as she’s walking out the door or when she’d like nothing more than to doze as her small son sleeps on her chest. A high fever will have her racing to the ER instead of the office. Even with her fleet of nannies and night nurses, new motherhood will, without warning, sometimes bring her to her knees. I hope she’ll keep trying to figure it out.

And I hope that in a year or two she’ll report back to us on how she handled her role as both CEO and first-time mother. She will have story to tell us unlike any we’ve ever heard. I hope she’ll tell us the truth.