The Greenway: In Need of a Director and a Direction

Questions arise as Nancy Brennan steps down after eight years at the helm of the Greenway Conservancy. 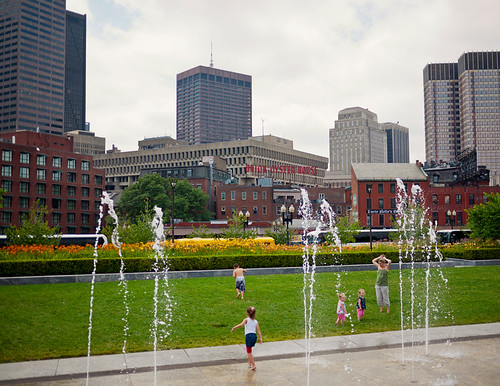 Welcome to thank god we live in a two newspaper town: Greenway Edition. After eight years at its helm, Nancy Brennan is stepping down from her role as executive director of the Rose Fitzgerald Kennedy Greenway Conservancy, having overseen the development of the 1.3 miles of parkland created in the former Central Artery and Big Dig site. Naturally, both dailies reported the news accordingly. The Globe just stuck to the facts, noting that Brennan’s departure wasn’t all kisses and hugs. She has faced criticism for her $185,000 annual salary and questions about the direction the Greenway should take as it moves from a state-funded model to one funded through the creation of a business improvement district. (The annual cost to run and maintain the park is $4.4 million.)

The Herald, on the other hand, could barely conceal its glee, having slammed the Greenway earlier this year for the six-figure salaries awarded to Brennan and other people on staff. Now, the Herald says, the time is right to put the Greenway under the jurisdiction of the city or state, so it can be treated like any of our other parks. In the words of one anti-Greenway advocate:

“Between the state fiscal crisis, the proposed cuts in local aid and the timely departure of the face of the Rose Kennedy Greenway, this would be a very good time to merge the Greenway into the Boston parks system,” said Barbara Anderson of Citizens for Limited Taxation. “You could take some of the extraordinary money that has been paid … and give some city employee intensive training in taking care of rose bushes, and then just go on with the parks department running the whole thing.”

The Herald says the “public outrage” has finally led to some changes being made. (Admittedly, the tab has helped stoke that outrage, and if you want to see some, you need only to read the comments accompanying the article.) But they don’t do a lot in the way of offering up new solutions for the site. For that, take a look at the grumbling, yet articulate posting over at the North End Waterfront blog, which calls the park a “dangerous overrated high-speed median strip, baked in the August-sun, brusquely windswept come October, dancingly-frostbitten with First Night celebrations”:

“[T]he eventual success of the Rose Kennedy Greenway, as a world-class urban garden in which we all may be proud and use, lies in the abundance of ‘friends-groups’ poised in its contiguous surround to care for it, leverage world-renown talent, and creative outreach programming – Friends of the North End Parks (FOTNEP), Friends of the Armenian Park, Boston Harbor Island Association, Wharf District Friends, Friends of Chinatown, to name a few — collectively they will minimize costs and eliminate State, MBTA/DOT and taxpayer expenses.”

And, as Paul McMorrow thoughtfully put it in an Commonwealth piece on the Greenway this past summer, the land where park now resides has always been a hotbed of political frustration:

“From the time of its conception, the mile-long Green­way was held up as the crown jewel of the Big Dig, the big payoff for surviving 15 years, and $15 billion, in road construction. Instead, it’s been passed around like a secondhand coat. When the highway project was in full swing, it easily could have absorbed $50 million or $75 million to fund the parks—a required piece of environmental mitigation—in perpetuity. But the project’s managers didn’t fund the parks then, and when Washington capped its financial exposure to the project and walked away, the state was left scrambling for places to cut costs. It created an outside entity, the Conservancy, to shoulder much of the cost of maintaining the parks above the Big Dig tunnels, and then promised to fund the parks with dedicated revenues that never materialized. And when that illusory revenue stream failed, an agency with no expertise in parks and a budget crisis of its own was left holding the bag. The Greenway has been open for four years, the parks have existed on paper for 20, and there’s still no long-term plan for how to pay for them.”

Suffice it to say that whatever direction the Greenway heads next, it’s going to be interesting.