Pedro Martinez Is Back!

The future Hall of Famer will serve as a special assistant to GM Ben Cherington. 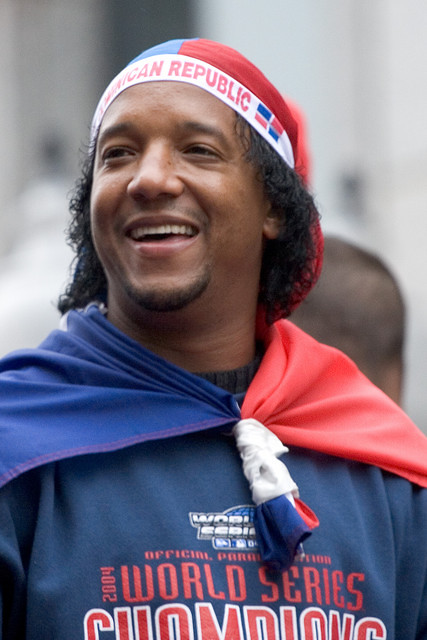 Bless his heart, Pedro Martinez is back. On Thursday, the Red Sox officially hired the diminutive, startlingly fearless, brilliant former fireballer, who will serve as a special assistant to general manager Ben Cherington. What, exactly, does that entail?

“I love to teach. I love to deal with the players,” Martinez told reporters, who if this photo is any indication, are thrilled that the future Hall of Famer is once again part of the Red Sox organization. “I have a very good relationship with the players and I’m also fun. I like to have and I think they need a little bit of that in the clubhouse.”

Quite frankly, I don’t really care what Martinez’s role is. He’s back, and that’s what matters. To celebrate his return, here is a list of my favorite Martinez moments. (Three of the four are from 1999. Martinez was insanely good that year.) Without further ado:

OK, it wasn’t a vintage performance by his lofty standards—Martinez only struck out six—but it was obviously incredibly important. He pitched seven shutout innings and allowed only three hits during Boston’s 4-1 win. That was the night that Martinez took his glove and slapped Cardinals outfielder (and former Martinez teammate) Larry Walker on the butt with it after the latter got thrown out at home. I guess it’s a testament to Martinez that Walker didn’t turn around and slug him. I'm not sure anyone else could’ve gotten away with that bit of wiseassery.

Ted Williams made a memorably triumphant appearance at Fenway Park that evening, but the night belonged to Martinez. He struck out five of the six batters he faced, mowing down Barry Larkin, Larry Walker, Sammy Sosa, Mark McGwire, and Jeff Bagwell.

That performance wasn’t without consequences. A few days after the All-Star game, he had by far his worst start of the season, and then ended up missing a few weeks with an injury in his pitching shoulder. Still, Martinez probably doesn’t regret going all out against the National League’s best hitters—even if it was only in an exhibition.

Martinez entered the game with the score tied at eight. He was nursing a back injury and could barely throw a fastball. Yet somehow he managed to pitch six hitless innings. He struck out eight, didn’t give up a run, and Boston beat the Indians, 12-8, to clinch the series.

Pedro Martinez at the absolute height of his powers. I remember watching this game from my parents’ basement. (Relax. I was 16 at the time.) By the time Martinez struck out Chuck Knoblauch swinging for the game’s final out, I was so excited I nearly punched a hole in the ceiling. Buster Olney, who back then covered the Yankees for the New York Times, was at the game:

Martinez struck out 17, the most ever against the Yankees, and Chili Davis had the Yankees’ only hit, a home run, as Boston prevailed, 3-1. Martinez faced 28 batters, one over the minimum, and those making the loudest noises among the 55,239 at Yankee Stadium were Red Sox fans. Boston pulled to within five and a half games of the Yankees in the American League East, hoisted almost single-handedly by a pitcher with a sagging face, the body of an oversized jockey, and an arm and confidence of a comic book superhero.

“We didn't get beat by the Red Sox,” said Paul O'Neill, the Yankees’ right fielder. “We got beat by Pedro Martinez.”

“That is pitching,” Rivera replied.

This game alone deserves its own 8,000-word retrospective. Any editors interested?