The most famous item of clothing in Red Sox history is up for auction. 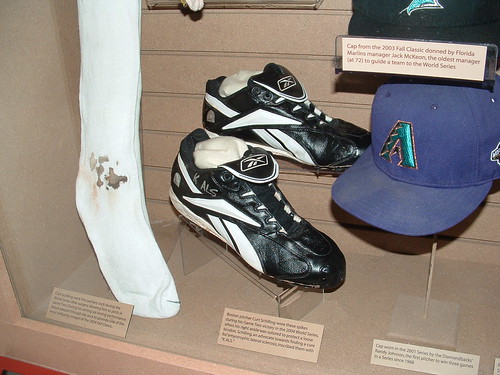 Absurdly wealthy Red Sox fans take note: the bloody sock Curt Schilling wore during Game 2 of the 2004 World Series is for sale. This week, Dallas-based Heritage Auctions is peddling America’s only well-known-but-not-infamous DNA-stained item of clothing. Live bidding isn’t happening until Saturday in New York, but the sock is already up to $60,000 in the online auction.

On Wednesday, we caught up with Jonathan Scheier, Heritage’s lead cataloger. He’s a lifelong Yankees fan, but didn’t mind taking a few minutes to talk about Schilling’s bloody sock.

Is this one of the more unique items that you guys have had come through there?

It’s such a wild card. It’s sitting now at $60,000. Our estimate is $100,000-plus. So really nothing would surprise me. Obviously there’s no way you can really look at any other piece. If we have a Babe Ruth signed baseball, for example, we can look at records of hundreds of sales, find one that’s similar in condition and calculate pretty closely what we can expect. For one-of-a-kind pieces like this, it could not move much more. It could sell for half a million if two super wealthy Red Sox fans fall in love with it. You never know.

This is about as solid as it comes because it was given to the Hall of Fame right after the game. It was on display until it was consigned to Heritage. That chain of command has been closely followed. He threw away the first one from the Yankees game, which I remember well because I’m a Yankees fan. It was a painful time for me personally, when [the Red Sox] came back from three down to win four straight. Then [Schilling] realized that this was a big story so he was smart enough to hold on to the second one and, so yeah, as far I understand, immediately after the game it was on its way to the Hall of Fame, where it’s been until we got it back.

Do you have a favorite item that’s come through there?

My personal affection is for Yankees stuff. The 1927 Yankees ball in this auction is really incredible. You never see any ball from that era signed in that manner. For it to be from the best team of all time, that’s pretty incredible. I like the unique and fun stuff, too. We had the cap that [Jose] Canseco was wearing when the ball bounced off his head for a home run. That was kind of fun to write [about]. Obviously, nowhere near the most significant piece that we’ve handled here.

Have you had any other Red Sox items? You mentioned the Buckner Ball. How much did that go for?

Quite a bit: $418,000. That was a biggie. Looking at our top results: a ’27 [Lou] Gehrig jersey, we sold Babe Ruth’s ’33 All-Star game jersey, Cy Young’s 1908 jersey, which to Red Sox fans, that’s of interest. We’ve got another Red Sox piece in this auction: The page that was signed by the 1915 Red Sox directing Major League Baseball to issue their portion of the bonus for being in the World Series to their manager, and that was signed by Babe Ruth. And it was actually signed on the day of his first appearance in the World Series. …

And I’m sure you’re aware that the anchor collection of [Saturday’s] auction is the Mike Eruzione Miracle on Ice collection. [Eruzione, one of the heroes of the 1980 Olympic hockey team, was a star at Boston University. One of the items for sale is his USA jersey.] He’s going to be on the Today Show Friday, too. [The jersey has] already gotten a ton of interest. The amount of inquiries we’ve gotten about it, the amount of pageviews we’ve gotten is off the charts. It’s something obviously that is of great interest to people who weren’t even particularly sports fans or sports collectors. They remember that. It’s an iconic moment in American history and Cold War history. We’re not surprised that that’s sort of ranking up there—it’s probably the most attention we’ve gotten for a piece or a collection in our history for sports.

Have you guys ever had any Bruins or Patriots or Celtics memorabilia?

We have Wayne Cashman’s 1970 Bruins ring in this auction. We had Bobby Orr’s rookie jersey, which was truly awesome. That sold for $191,000, which at the time was the highest price ever thrown in for a hockey jersey. We’re gonna beat that with Eruzione.