And other reasons why we're missing the injured Celtics point guard. 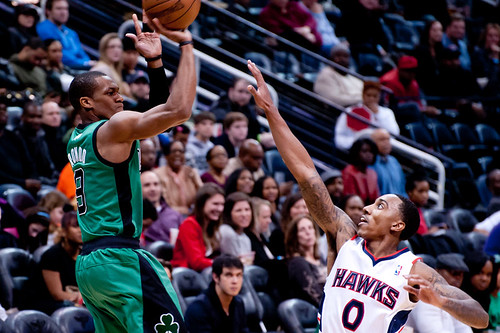 The Celtics made a small move at the NBA trading deadline on Thursday, sending Leandro Barbosa’s expiring contract and Jason Collins to the Wizards for Jordan Crawford. The guard, who gained fame four years ago for dunking on LeBron James, is averaging 13.2 points per game this season. The low-key acquisition—at least compared to some of the ridiculous proposed deals being tossed around over the past few weeks—made me miss Rajon Rondo even more than I already did.

Luckily, the new issue of Sports Illustrated contains a six-page profile of the injured point guard. Writer Lee Jenkins does a hell of a job capturing what makes Rondo, so, well, eccentric. The story isn’t online yet, but I highly recommend checking it out. Among other things, we learn that:

1. Rondo loves sucking down Shirley Temples, the grenadine-laced concoctions that I nearly overdosed on at my Bar Mitzvah. “Waitress are like, ‘What?’” Rondo tells Jenkins. “I feel like I have to add a splash of Patron, and I don’t even really drink.”

2. He had freakishly large mitts, even as a baby. Jenkins reports that after Rondo was born, the obstetrician said, “His hands are humongous.”

3. His no-look passes often catch teammates off guard. This sometimes results in pain. “I don’t him them in the head,” Rondo tells Jenkins, “I hit them in the face.” Ouch.

When Olisa dropped the winning disk, Celtics officials started to shout. [Celtics director of community relations Matt] Meyersohn grabbed the microphone. “This has never happened!” he bellowed.” Olisa rushed around the table to take a picture with the shell-shocked champion, who tried to curl up a corner of his mouth for the camera but instead bowed his head, resulting in a snapshot of his scalp.

That last one reminded me of another Rondo-is-obsessively-competitive story. In 2011, I wrote a feature about my friends Brian and Justin, two brothers from Brookline who became close with Kendrick Perkins. One anecdote that didn’t make it into the piece was about the time Brian and Justin went bowling with Perkins and his pal, Rajon Rondo. That night, Brian happened to beat Rondo. Afterward, Brian, knowing what he did was no small feat, went to shake Rondo’s hand. “I’ll shake your hand,” Rondo said, “after I beat you the next game.”