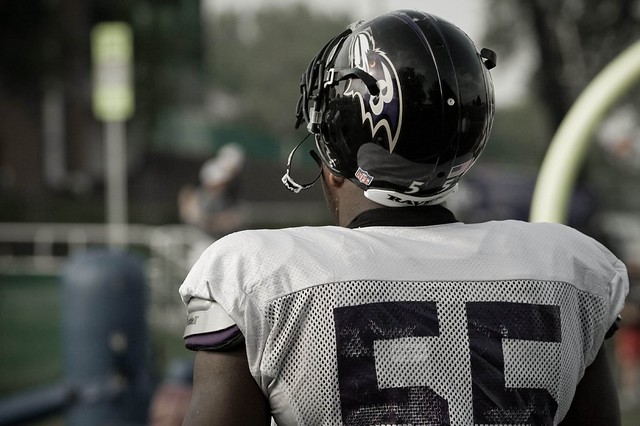 On Wednesday afternoon, Baltimore Ravens linebacker Terrell Suggs appeared on WEEI’s Big Show and said some mean stuff about Tom Brady and company. It was the second time in as many months that Suggs felt compelled to trash talk the Pats. But at least the interview was entertaining. Here are some of Suggs’s biggest digs:

“Do I apologize for what I said? No. Do I mean what I said? Yeah. Could I have worded it a little better? Probably, but the fact of the matter is you can’t really consider it a rivalry because you have a few more championships than we do, but this has been steaming for a while.”

Suggs is, of course, referring to his January outburst in which he called the Patriots “the most arrogant pricks in the world.” Give the guy a little credit, though: He didn’t issue the kind of false apology that most public figures spew these days. Onto the next one:

“There was the whole invention of the Brady rule. Years before, I hit Drew Brees and I accidentally tore his knee up. No rule was made. Of all the quarterbacks in the NFL who got their knees blown out when they got hit. Carson Palmer got his knee blown out. But then one guy got hit and changed the whole rule for the NFL?”

Maybe he’s on to something. Quarterbacks like Brady benefit from referees looking out for them, but isn’t this is a little like an NBA player complaining that Kobe Bryant gets all the calls? Yeah, yeah, Brady gets special treatment. We’ve heard that before. (For the record, Suggs is the same guy who in 2010 said he voted for Ryan Fitzpatrick over Brady for the Pro Bowl.) Then there’s this:

Here’s where Suggs loses me a little bit. Of course opposing players are going to hate the Patriots. They’re good. They beat up on most teams. At least Suggs had the balls to publicly rip the Patriots. I suppose winning a Super Bowl can be emboldening—even though it’s not like he was very shy before.