Residents will gather in Boston and pummel each other with pillows in a very public location.

For the seventh year in a row a mob of area locals will congregate at an undisclosed location in the city and repeatedly hit strangers with pillows.

On Saturday, April 6, the Banditos Misteriosos, a social group dedicated to “bringing Boston alive with a slew of activities that are free, [and] open to everybody,” will host the annual pillow fight in a soon-to-be-revealed location, as part of International Pillow Fight Day 2013.

The group says people should sign up for the event online, and wait for organizers to announce the exact spot, which will be posted at midnight prior to the Saturday gathering. Once participants agree to take part in the pillow pummeling, they are urged to show up with a soft weapon in hand and prepare for battle. “Show up at 2:55 p.m., remain inconspicuous to the best of your abilities. Hide your pillow in bags, big jackets [or behind] random trees. At 3 p.m., you’ll hear the very obvious signal—[then] rush in and pillow fight away,” the group’s event page says.

This will be the seventh consecutive year that Boston has participated in the worldwide event, which will also be happening in Budapest, Cape Town, Tel Aviv, Caracas, Chicago, London, Los Angeles, New York City and hundreds of other locations. Last year, more than 1,200 participants showed up for the Boston event at North End Park, according to the group, and this year, the Banditos Misteriosos want to beat that number. “Invite your friends, family and co-workers. Spread the word! Let’s put Boston on the World Pillow Fight Map once again.”

1. Bring a pillow, a soft one is preferred.

3. Don’t hit anyone without a pillow

4. If you are wearing glasses, make sure you take them off. 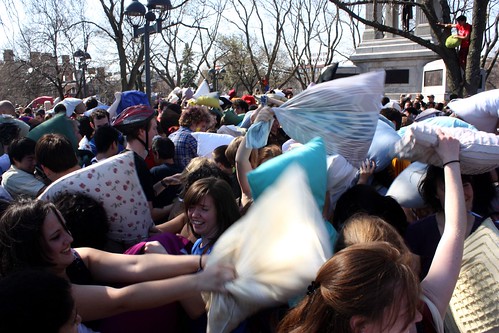 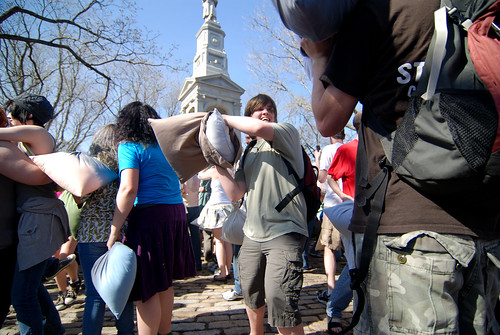