Why? Because he's pretty useless now. 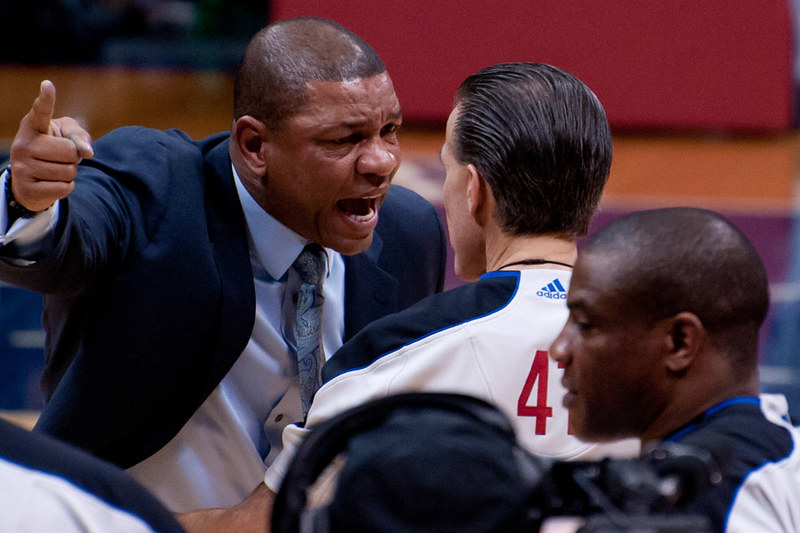 Back in May 2011, Doc Rivers signed a five-year, $35 million contract with the Celtics. That was a huge deal! NBA coaches don’t usually make anywhere near $7 million per year, but the Celtics were paying a premium to lock him up long-term. The idea was that, as Kevin Garnett, Paul Pierce, and Ray Allen’s time waned, the stability provided by Doc would help see the Celtics through their transition to the next era. Aside from being a steady hand, his sterling reputation would help attract free agents to Boston, a city that NBA players have been notoriously hesitant to come to.

At the press conference announcing the deal, Celtics GM Danny Ainge said, “Doc wants to be here. It’s not all because he thinks that over the next five years we’re going to have the best team in the NBA. He feels like he’s part of this franchise, he likes working here, and he’s willing to do whatever it takes to help us be successful.”

So much for that. As you no doubt know by now, Rivers has been angling for a chance to move out to LA as part of a package deal that would send him and Kevin Garnett to the Clippers. But here’s the thing: Even if it all falls through and Rivers returns to the Celtics, he’s useless now. A big waste of money. I’d rather the team pocket the cash and knock a couple bucks off the Garden’s beer prices (that’ll add up to $7 million, right?). Sure, Rivers can still coach just fine, but whatever stability that five-year contract was supposed to provide is out the window. Even if he stays, now that we know he’s willing to jump at the best situation whenever it comes along, what free agent is going to come here based on his appeal? If not even a long-term contract—the specific legal instrument designed and used everywhere to ensure that somebody has to do the thing they agree to—can guarantee he’ll be around, what can? Besides, how does he have credibility with the players he’s actively trying to ditch? And fast-forward to next off-season: Is Boston going to have to go through this whole charade again?

Really, in a sense, Rivers has been stealing money the last two years. Part of the reason he got paid so generously is because he signed such a long contract. The $14 million he got for the past two seasons was delivered on the promise that he’d be around for three more. It should be no surprise to him today that Kevin Garnett and Paul Pierce got old. Unless he was confused by the meaning of “five years,” he knew when he signed the contract that he was going to have to go through a rebuilding project. And now he’s changed his mind. Talks with the Clippers are apparently stalled right now, but at this point it’s hard to imagine Doc returning. It’s probably just as well—if he did come back, he’d be massively overpaid.