Public officials and survivors participated in a special tribute ceremony near the finish line. Patrick Downes would never wish for anyone to have to go through the devastating pain he and his wife have endured over the last year.

“However, we do wish that all of you, in some point in your lives, feel as loved as we have felt…it has been the most humbling experience of our lives,” said Downes, during the Boston Remembers Tribute ceremony at the Hynes Convention Center.

Recalling the tremendous support the community has shown in the last 365 days, Downes, who lost his leg when one of the bombs went off at the finish line, said the tragedy is yet another chapter in a city rich with history. “In this spirit, we choose this Marathon Monday to show the world what Boston represents, through our deeds and dedications,” he said, staying optimistic about this year’s race, instead of looking back on the life-changing events that shook the city to its core last year. “I am so proud to be a Bostonian, because I am so proud to be connected to all of you.”

Downes was one of three survivors of the April 15, 2013, attack who took the stage at Tuesday’s special commemorative event, to say “thanks” to the first responders, residents, elected officials, and communities all over the world that stepped up and offered unwavering support in the face of tragedy.

The tribute event, one year to the day of the bombings, began with a musical performance by the Boston Pops, featuring Keith Lockhart and Renese King, who sang “America the Beautiful.” Her rendition of the anthem was followed  by opening remarks by Reverend Liz Walker, a pastor from the Roxbury Presbyterian Church. “We are humbled by what we have been through, and proud of what it has made us,” Walker said. “It will teach us and lead us boldly into the future, and we will hold our memories gently, and with honor, just as we honor those we love, those who are gone, but never lost. Today we remember.”

The Reverend paid homage to each of the four victims—Martin Richard, Krystle Campbell, Lingzi Lu, and MIT Officer Sean Collier—who lost their lives as a result of the horrific attack and subsequent search for the alleged suspects in the days that followed. “We will remember,” said Walker, before members of the Boston Children’s Chorus sang a version of “Up the Mountain.”

The occasion was marked by public appearances by survivors like Downes, and community leaders like Tom Grilk, executive director of the Boston Athletic Association, Vice President Joe Biden, Governor Deval Patrick, Mayor Marty Walsh, and former mayor Tom Menino, who took the stage to roaring applause for the first time since leaving office. “I want you to hear this solemn promise,” Menino said to survivors. “When the lights dim and the cameras go away, know that our support and love for you will never waver, and what you need to do to recover and carry on, know that the people of Boston, and I, will be there for you.”

Speaking about each of the victims killed last year, Walsh similarly touched upon the importance of Boston’s amiable resilience. “We still hurt,” he said. “We will never be the same. But we are stronger than ever. We have been tested and tested again, but we face these hurts with a new understanding of strength.”

Governor Patrick acknowledged that it was nearly impossible to add to the heartfelt testament delivered by the survivors who shared their stories during the event, but he did his best. “I’m just glad to be here with all of them and all of you,” said Patrick. “I’m glad to have this marathon behind us, and the next marathon ahead of us…because as I see it, Boston Strong is about the triumph of community itself.”

Patrick said people were there to celebrate that sense of community, and show of kindness and grace that was evident in the days and weeks after the 2013 race. “That’s what a community is, and I am so, so proud to be a part of this one,” he said.

Representing the White House, Biden delivered a riveting account of that same community-driven pride that not only spouted from the streets of Boston, but from all around the world. “You are living proof that America can never, never, never be defeated. You are the proof of that assertion. So much has been taken from you, but you’ve never given up,” Biden said. “We will never cower…we are Boston. We are America. We respond, we endure, we overcome, and we own the finish line.”

Although he didn’t attend the tribute ceremony, President Barack Obama offered remarks ahead of the event, describing the city’s pivotal role in showing the entire world that no act of terror could ever trump the spirit of Boston. “We send our thoughts and prayers to those still struggling to recover. We also know that the most vivid images from that day were not of smoke and chaos, but of compassion, kindness and strength,” Obama said in a statement, where he mentioned specific survivors and first responders by name. “Today, we recognize the incredible courage and leadership of so many Bostonians in the wake of unspeakable tragedy. And we offer our deepest gratitude to the courageous firefighters, police officers, medical professionals, runners and spectators who, in an instant, displayed the spirit Boston was built on—perseverance, freedom and love.

Obama said come Marathon Monday, on April 21, the city would rise again, and continue to show its strength through the outpouring of support and crowds of spectators expected to line the race route. “And when the sun rises over Boylston Street next Monday—Patriot’s Day—hundreds of thousands will come together to show the world the meaning of Boston Strong as a city chooses to run again,” he said.

The day-long event concluded with a flag-raising ceremony at the site of the finish line, with a moment of silence to pay respects to everyone that was impacted by the horrific events of last year. 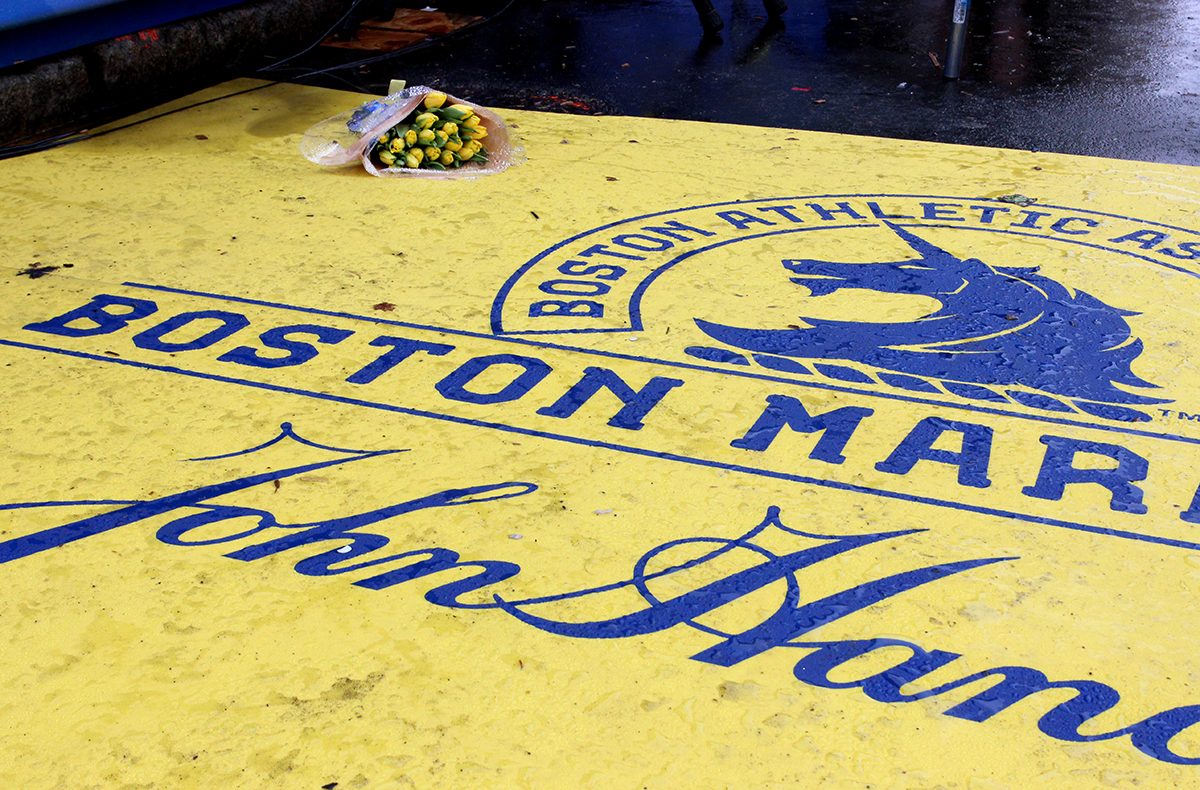 A bouquet of flowers was left at the finish line on the morning of the one year anniversary of the Boston Marathon bombings.Photo by Olga Khvan 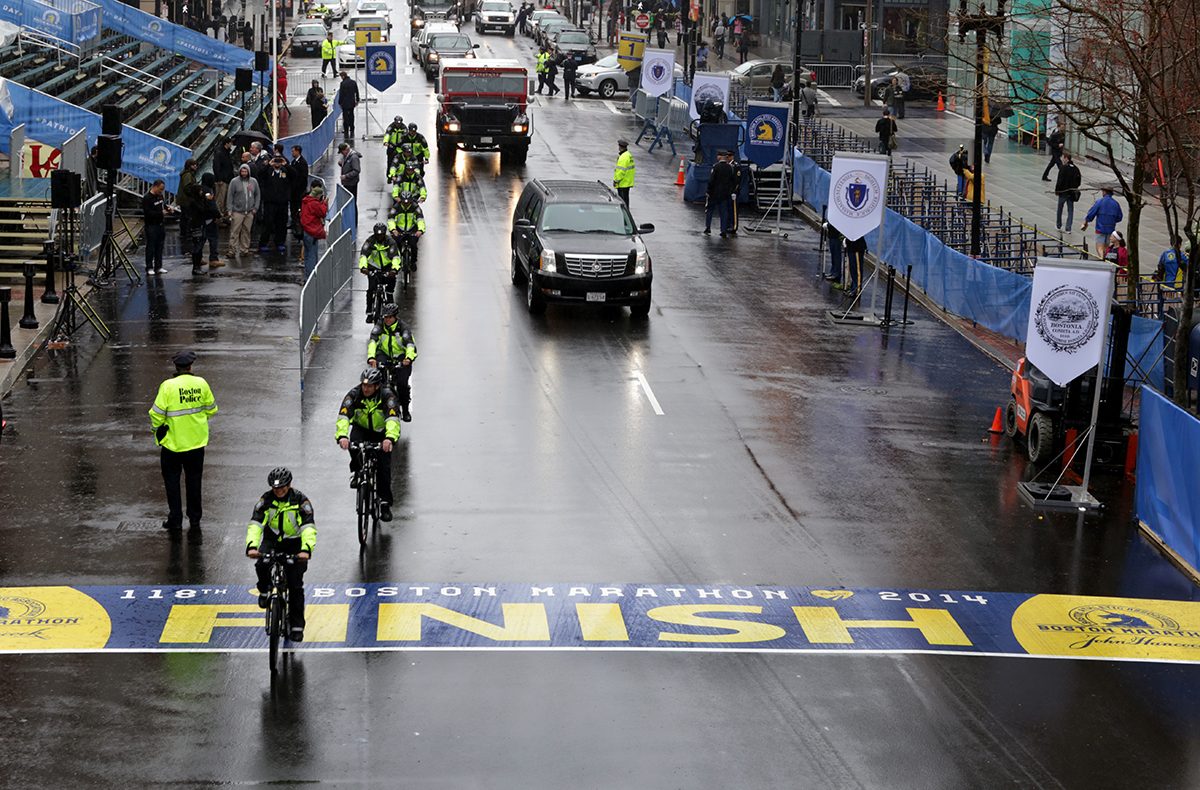 There was a heavy police presence at the finish line, and a section of Boylston Street was closed to pedestrians for the majority of the day.Photo by Olga Khvan 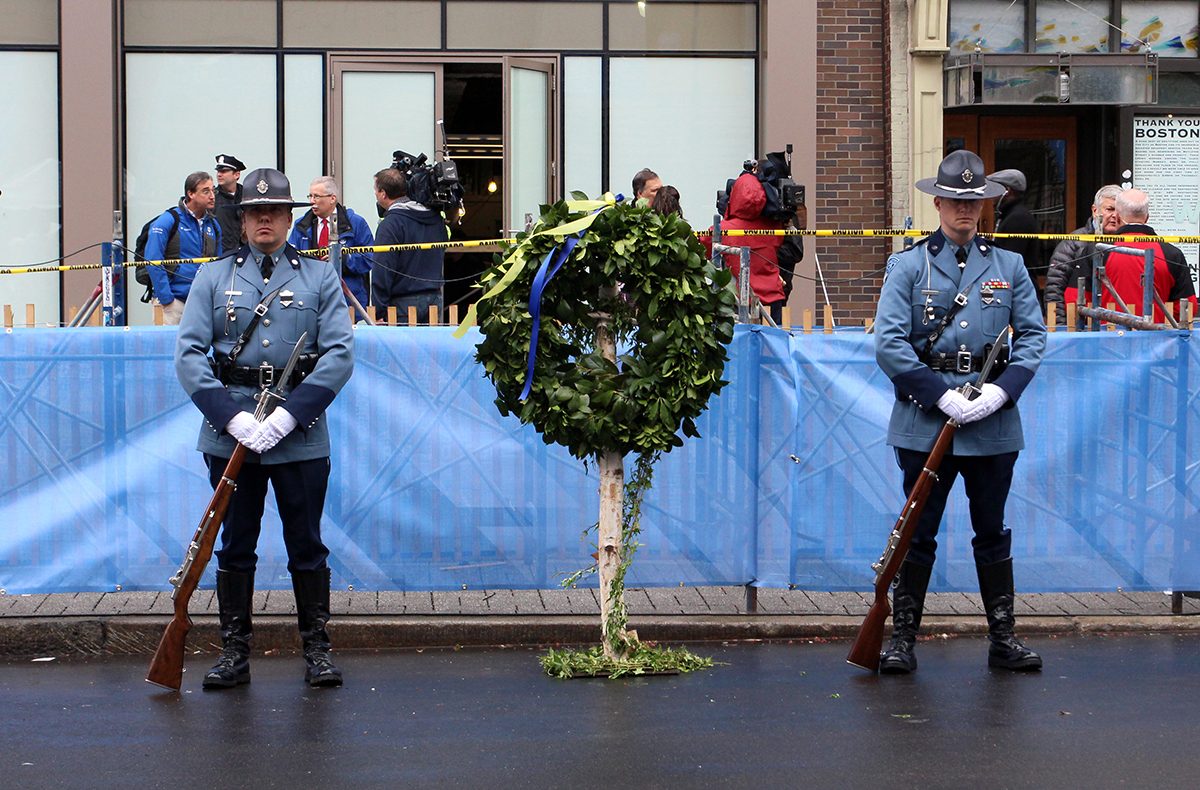 Massachusetts State Police officers stand by a wreath marking the location of one of the Boston Marathon bombings on Boylston Street. Several changes of guard took place throughout the day.Photo by Olga Khvan 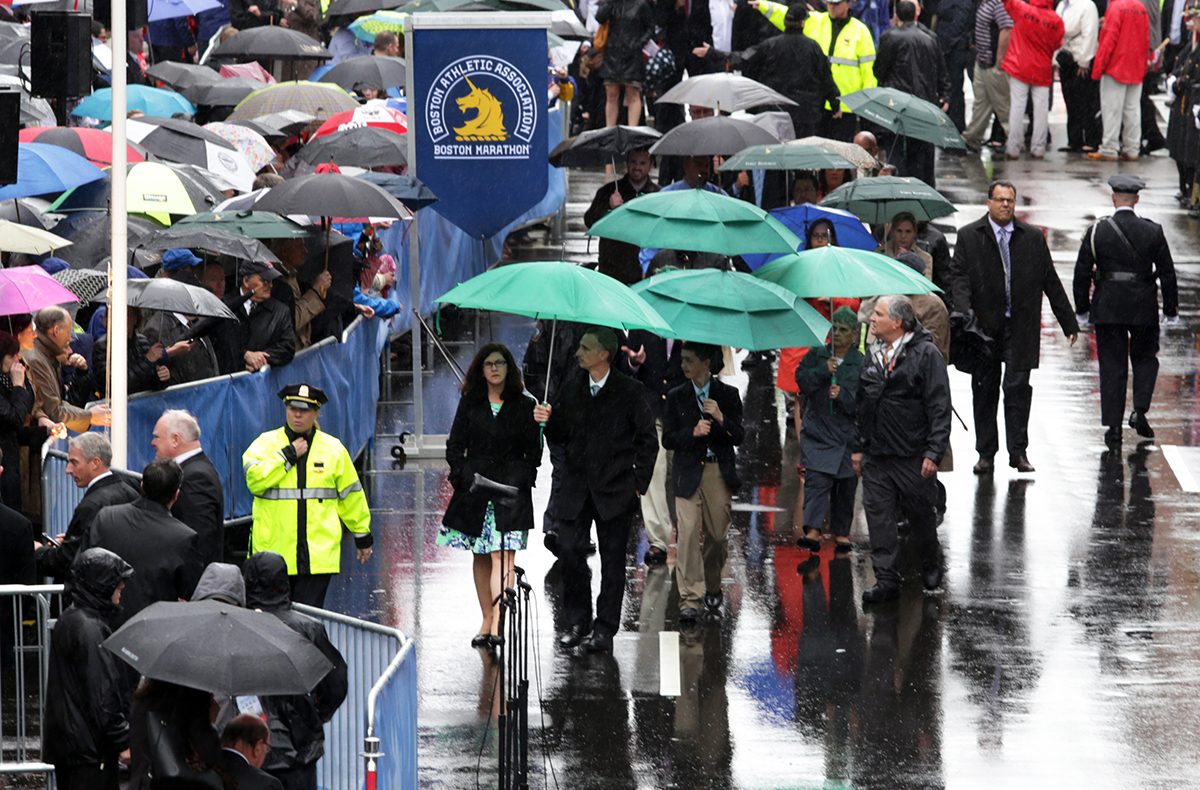 Denise and Bill Richard, who lost their son Martin on the day of the bombing, arrive at the flag raising ceremony with their son Henry.Photo by Olga Khvan 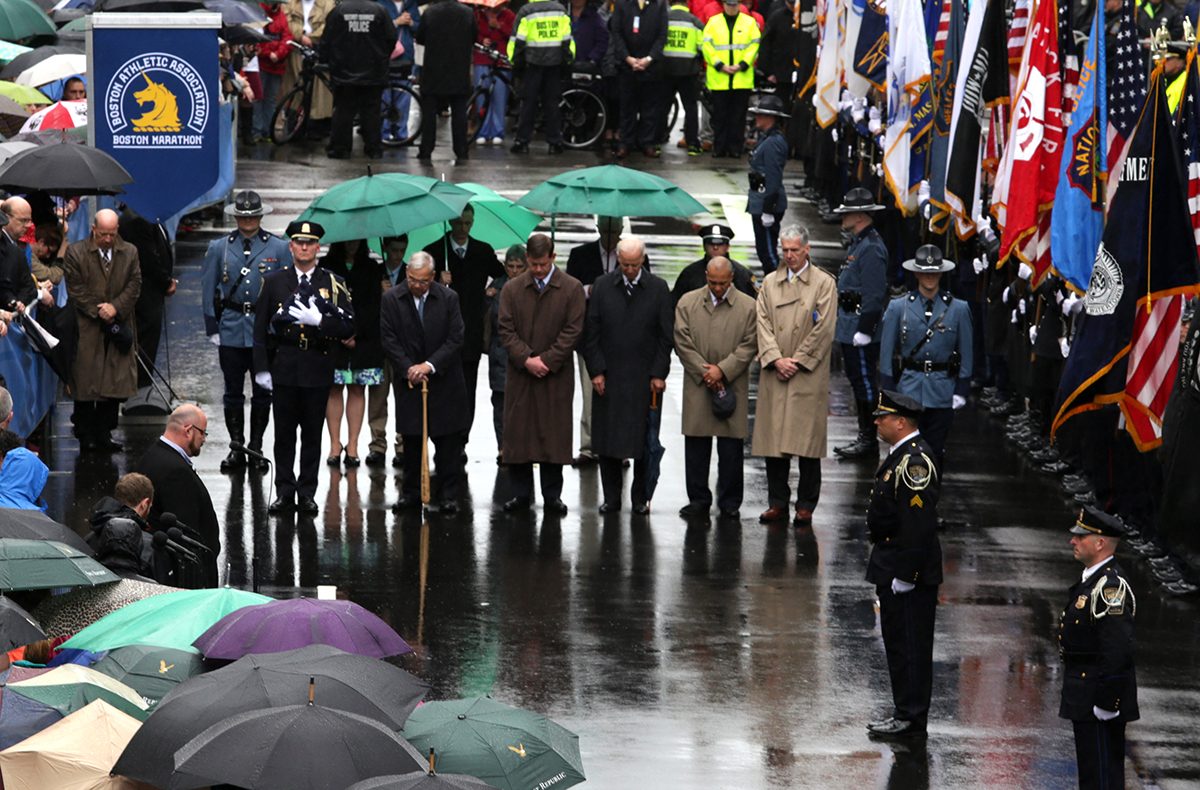 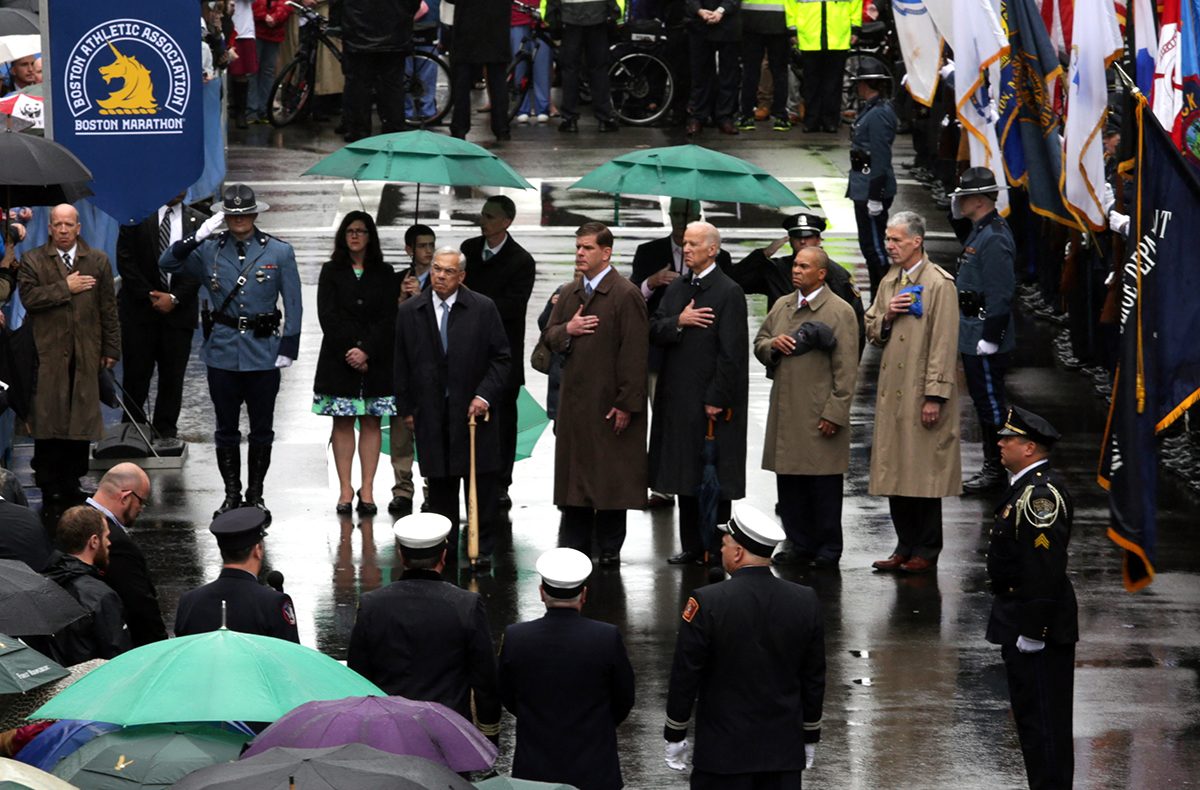 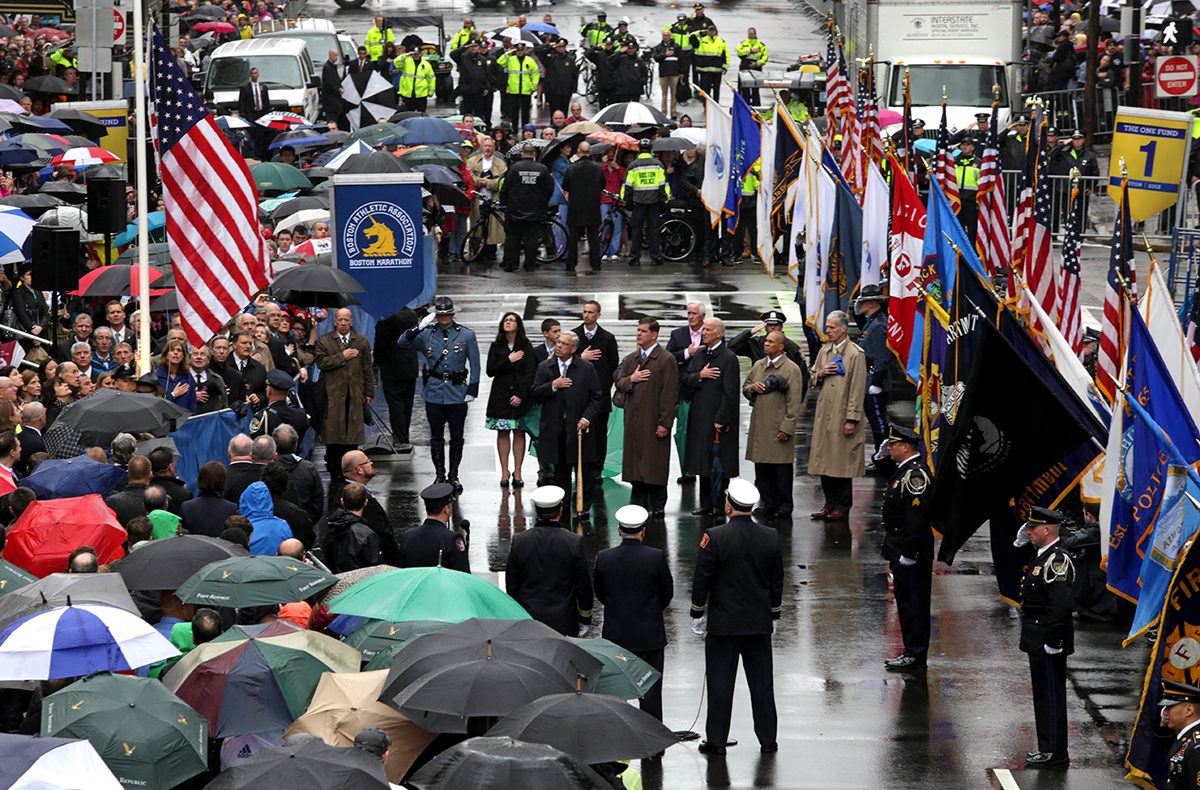 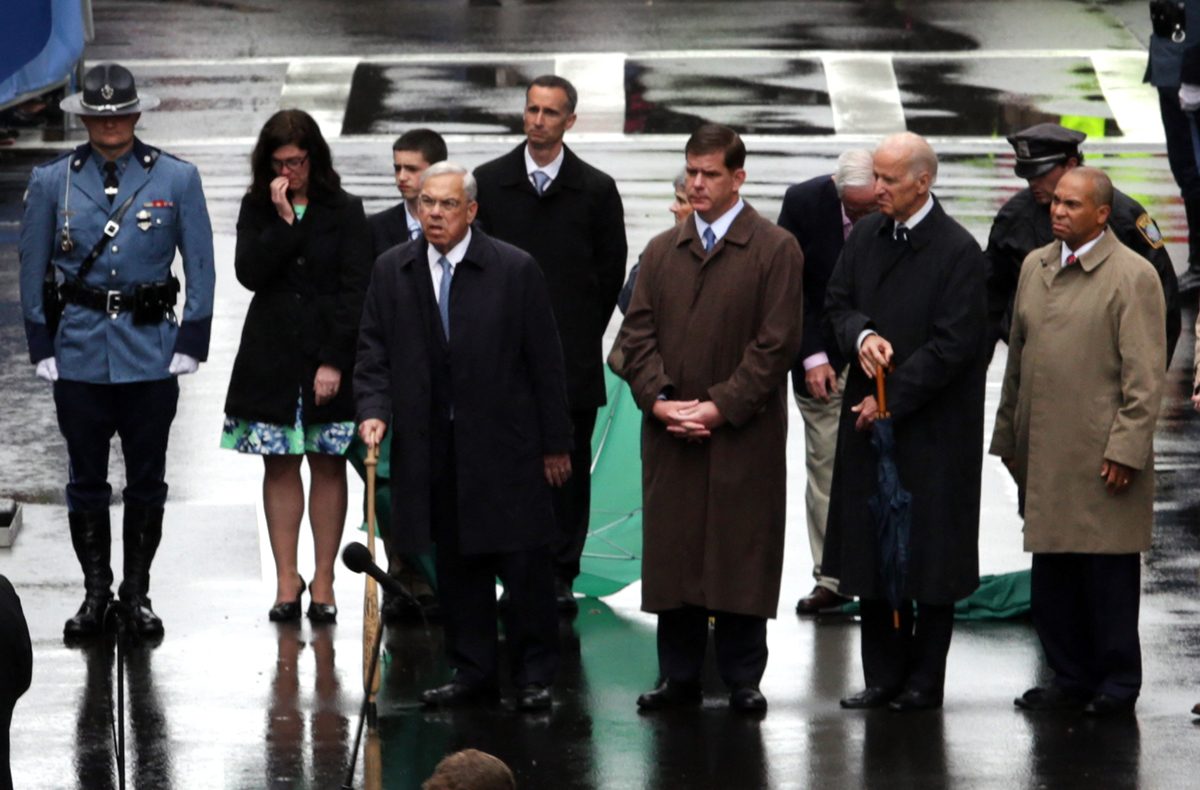 Denise Richard wiped away tears during the flag raising ceremony at the finish line.Photo by Olga Khvan 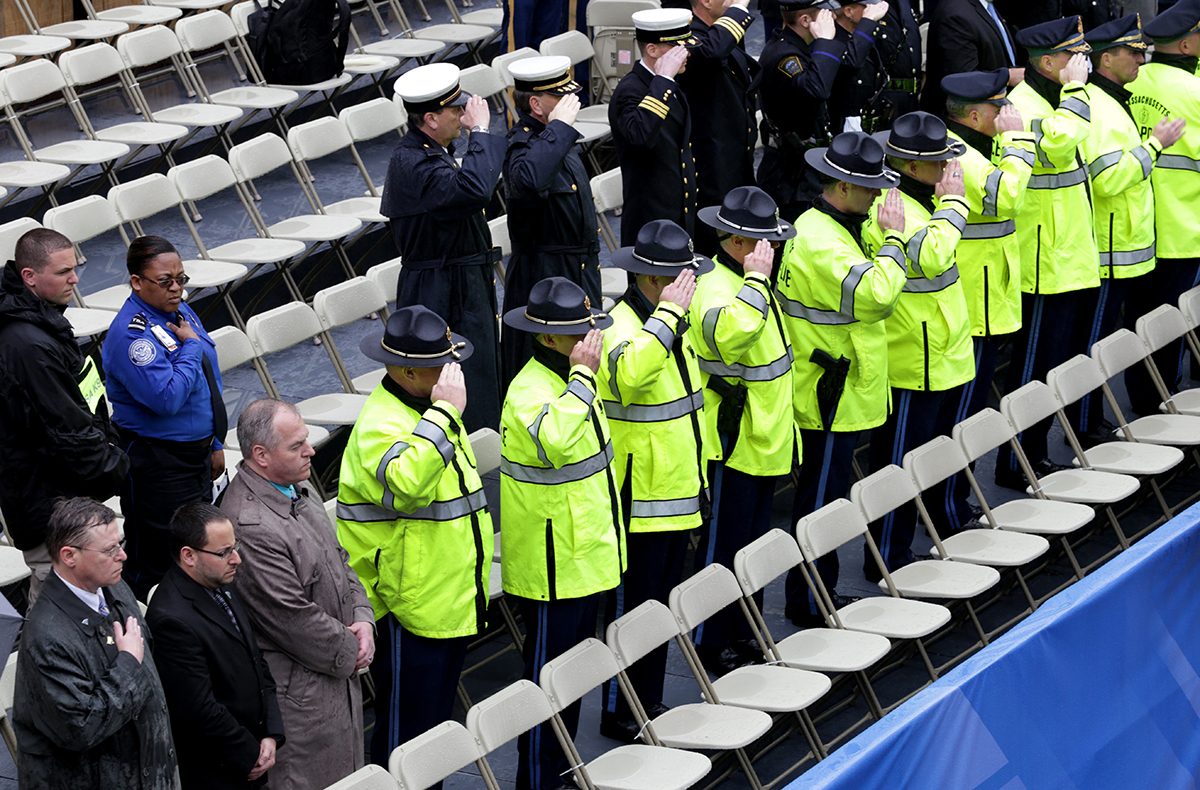 Members of the Boston Police Department paid their respects from the sidelines.Photo by Olga Khvan 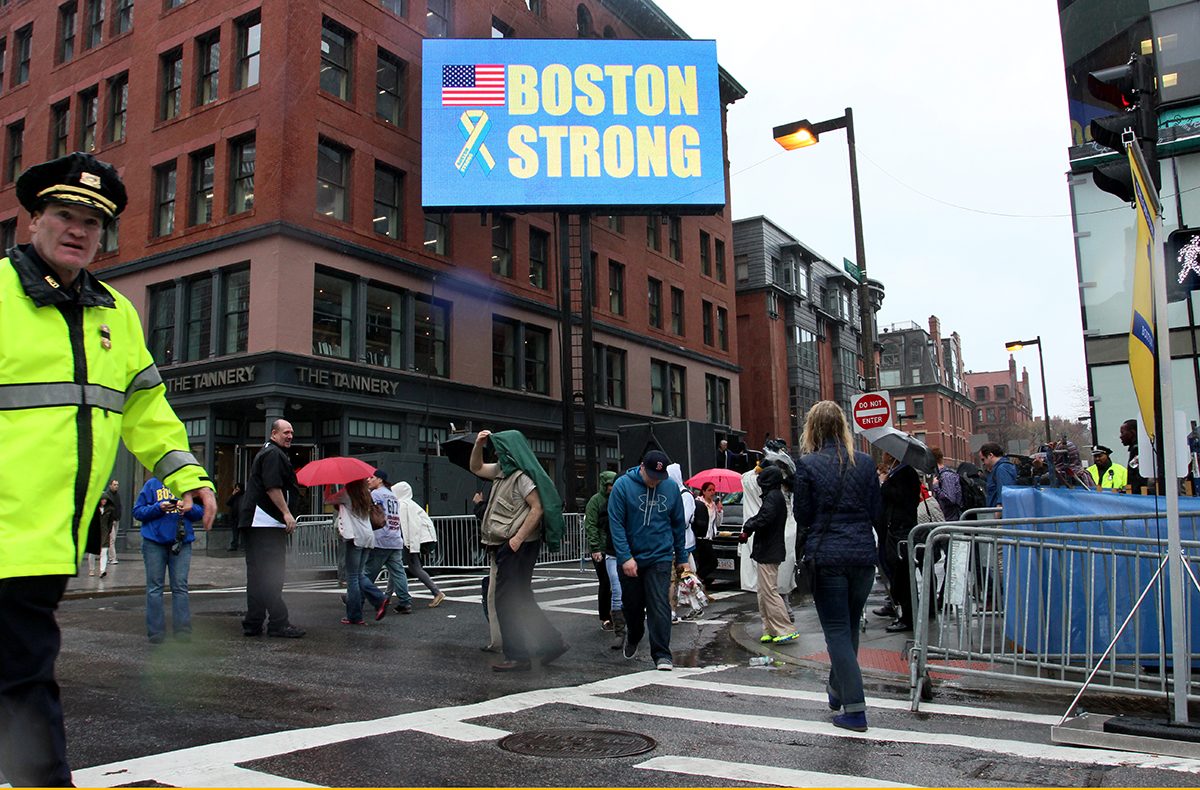 A screen was set up a block away from the finish line, which projected the ceremony inside Hynes.Photo by Olga Khvan 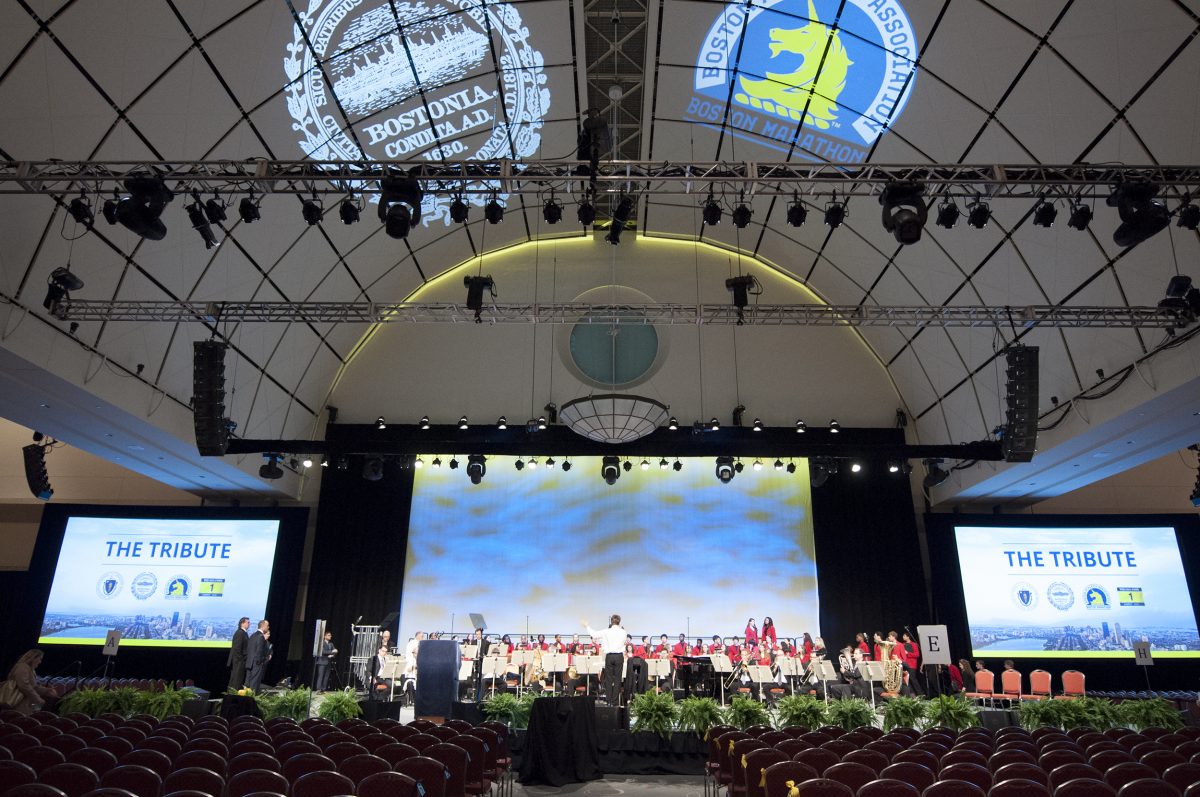 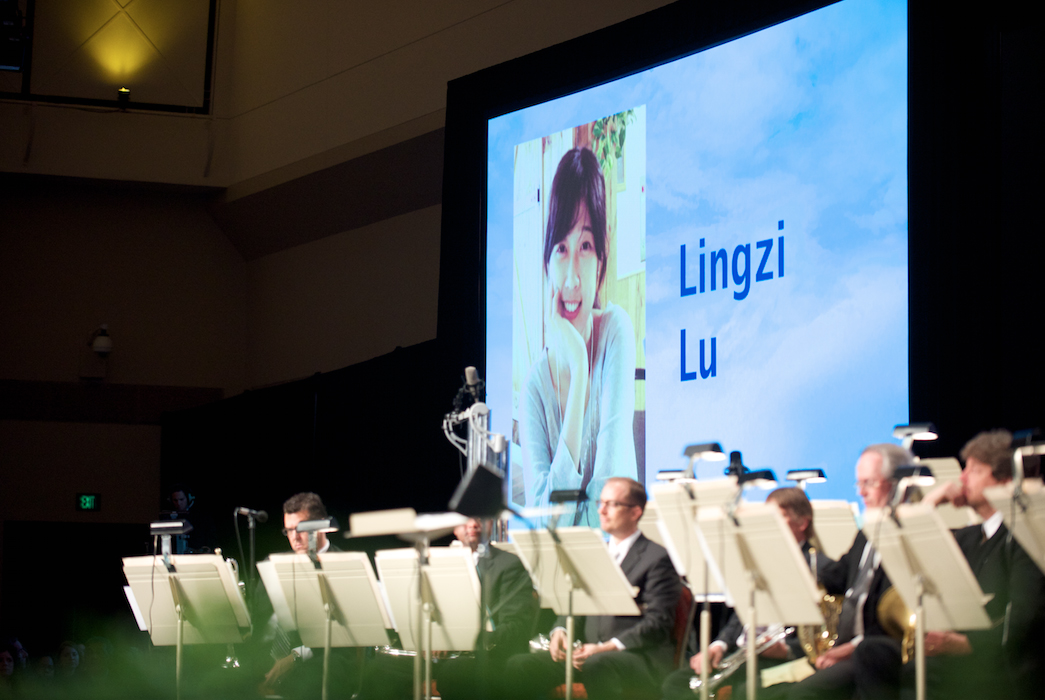 A moment to remember each of those lost.Photo by Natasha Velickovic, Happy Zebra Photography 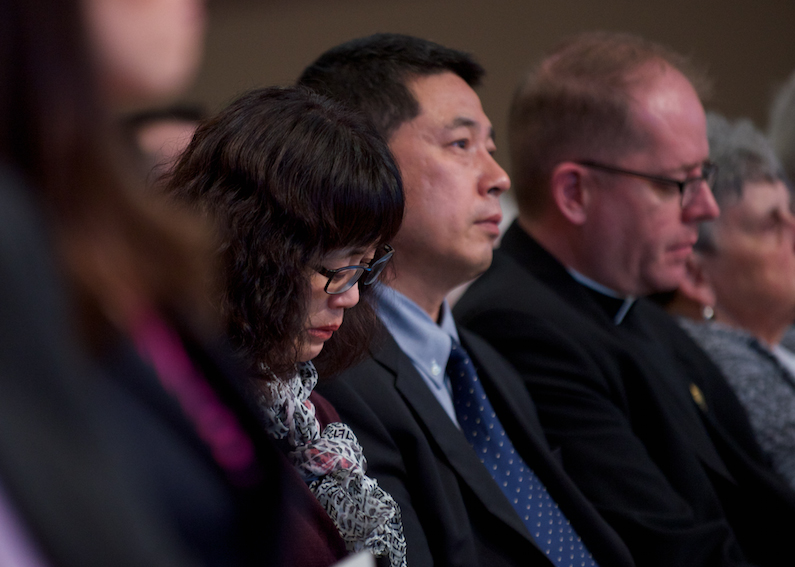 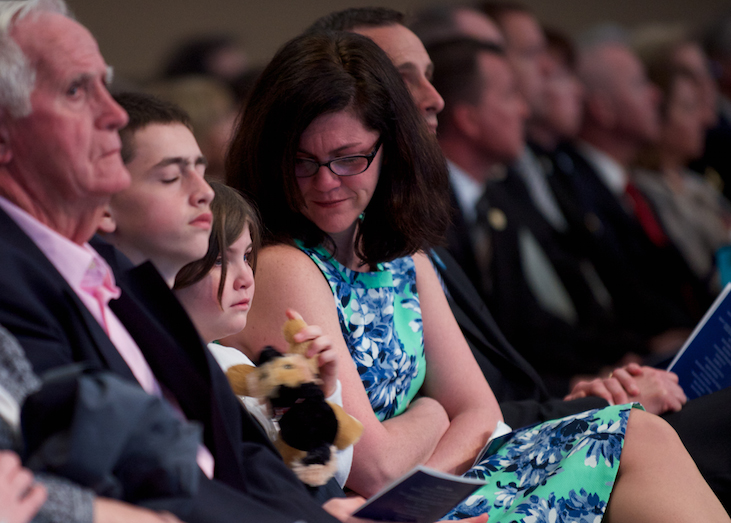 The Richards family sits in the crowd.Photo by Natasha Velickovic, Happy Zebra Photography 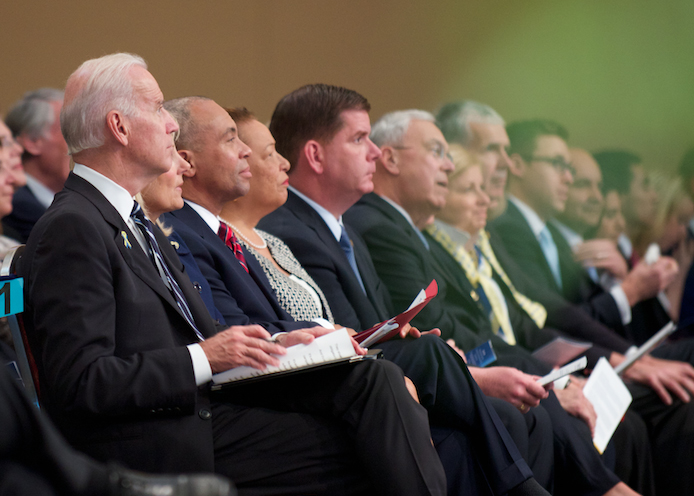 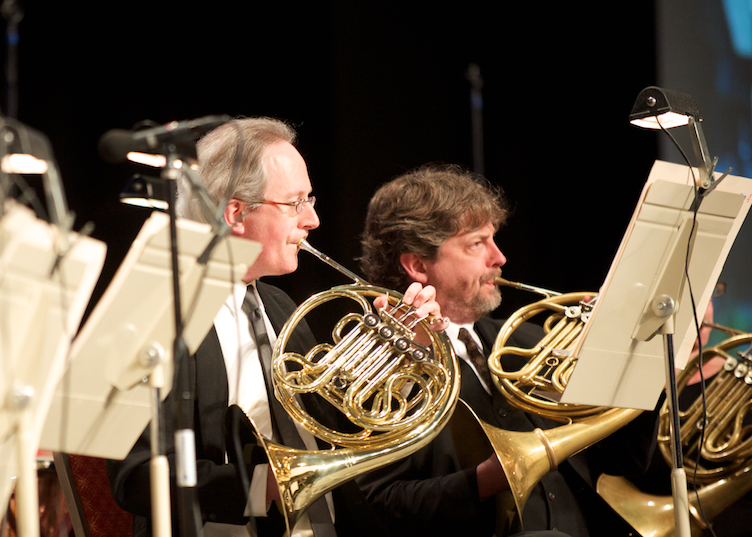 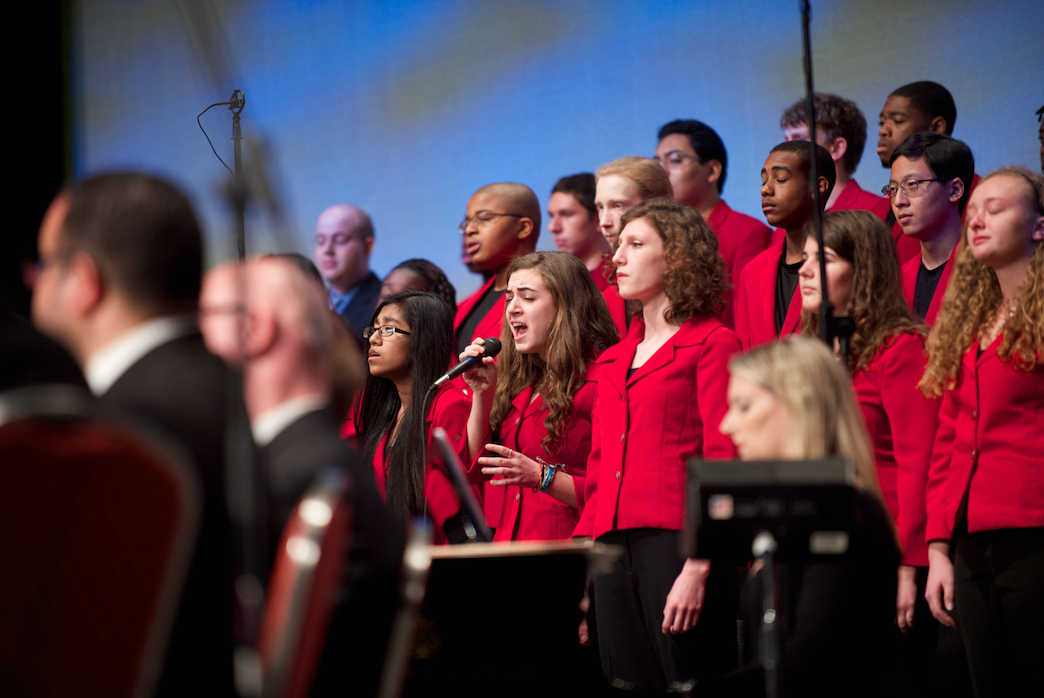 The Boston Childrens Chorus sings "Up to the Mountain"Photo by Natasha Velickovic, Happy Zebra Photography 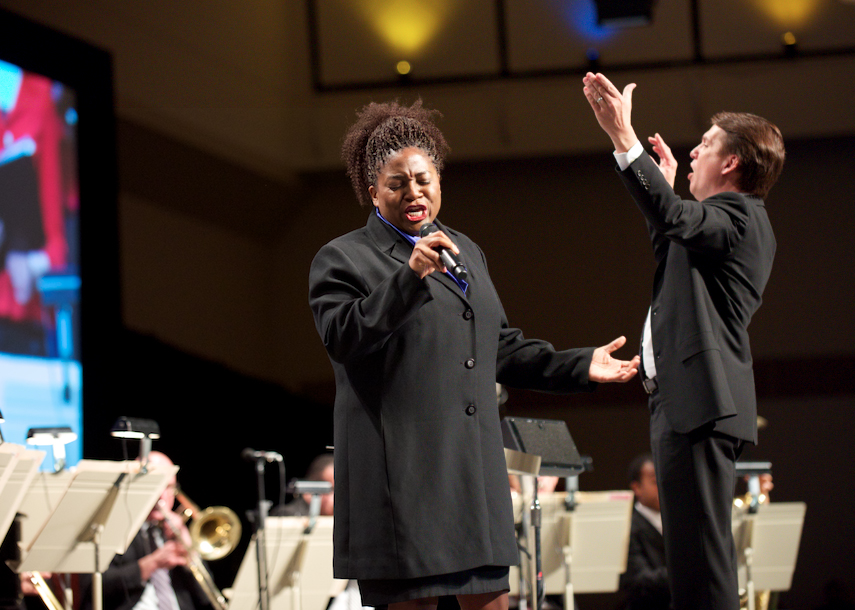 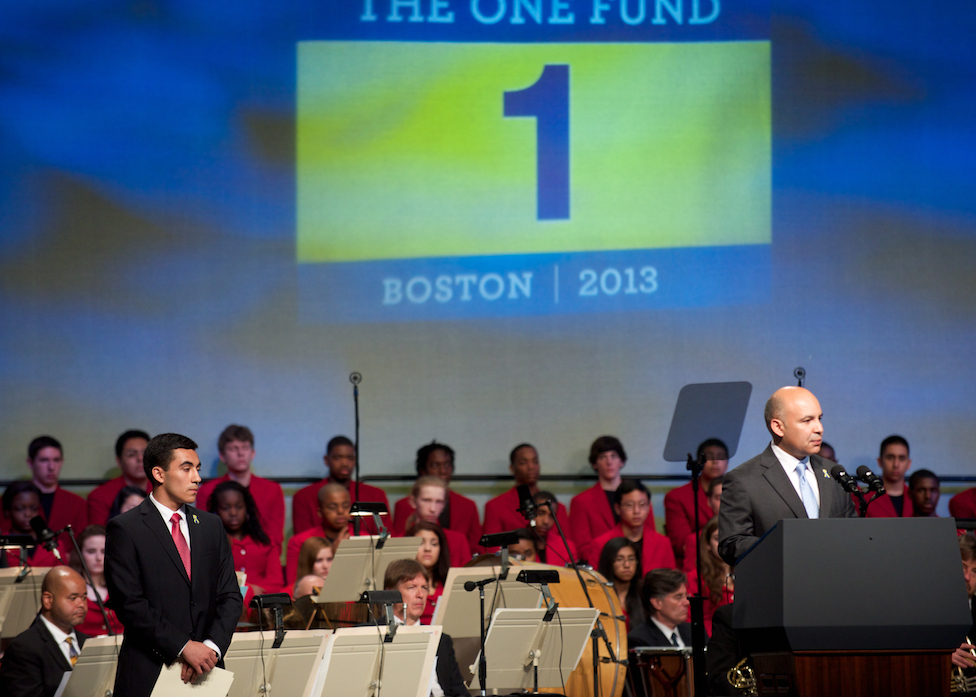 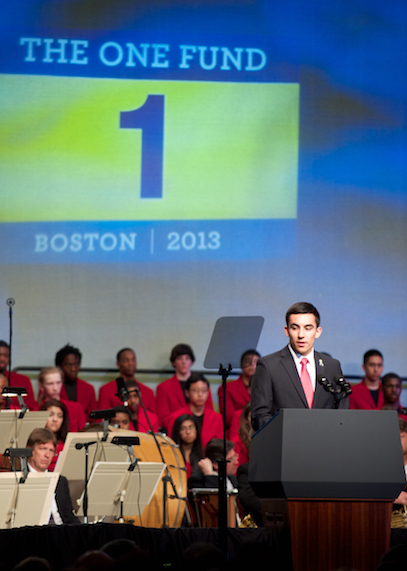 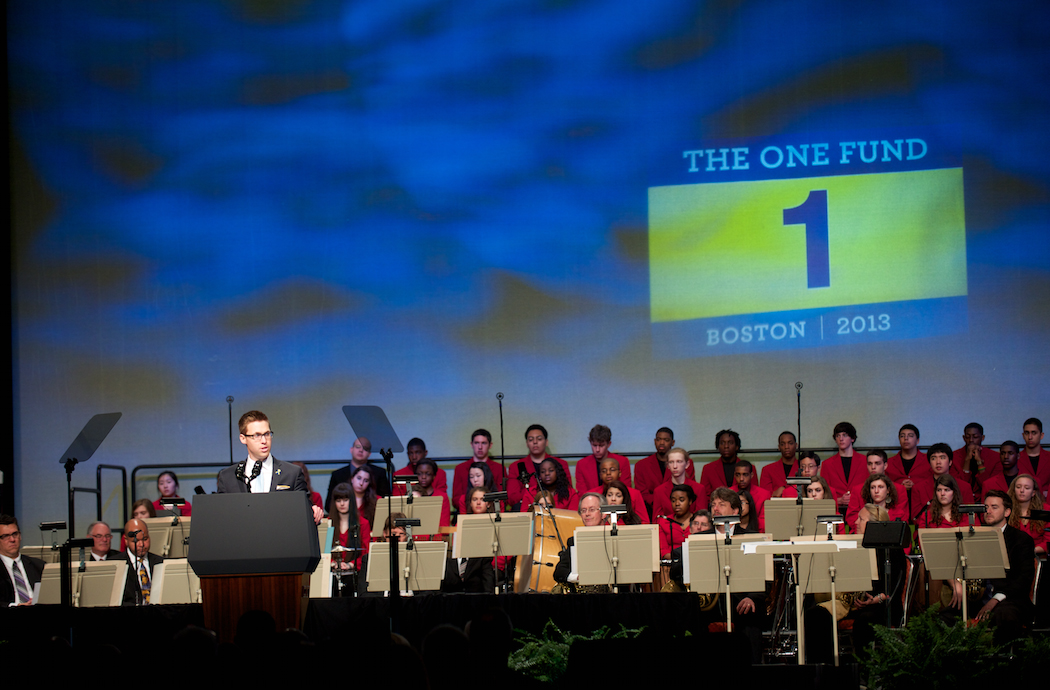 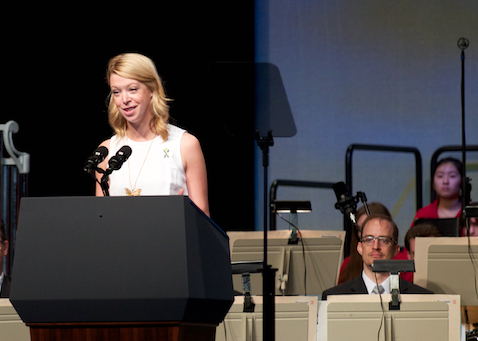 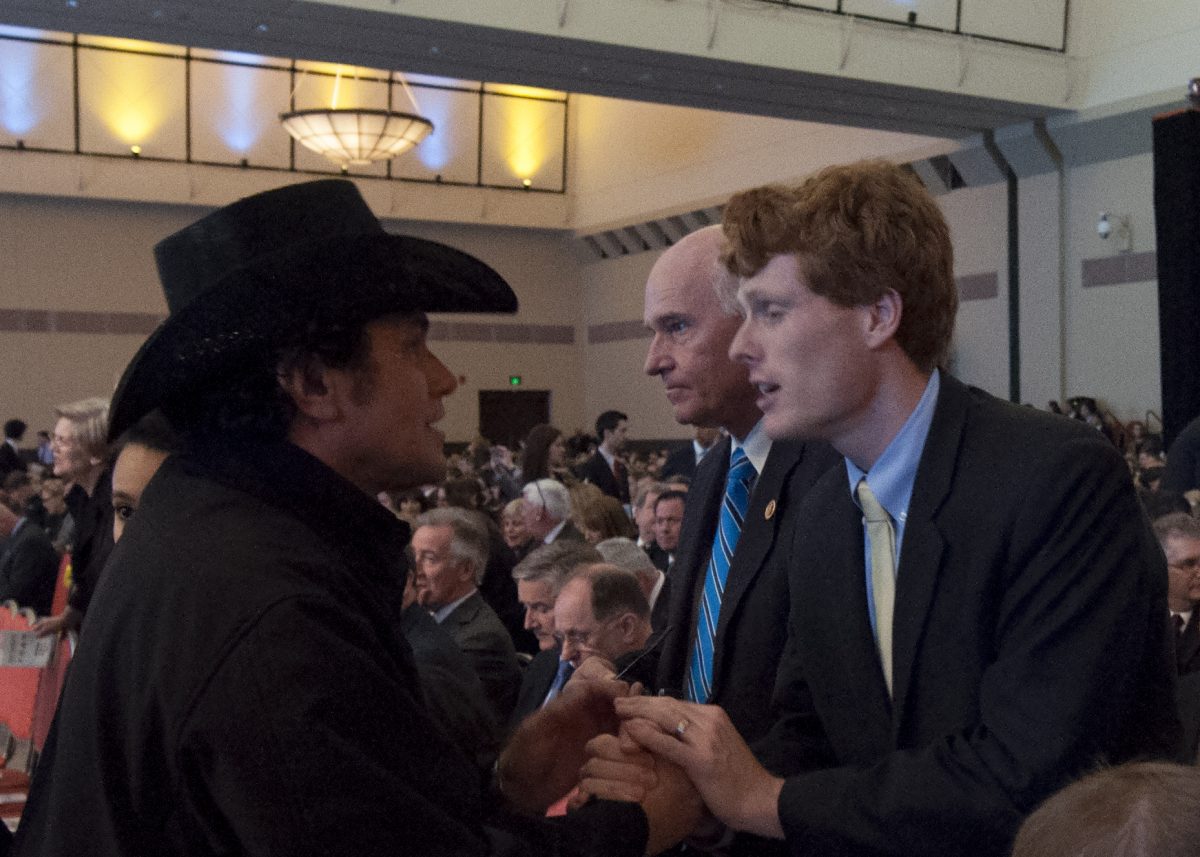 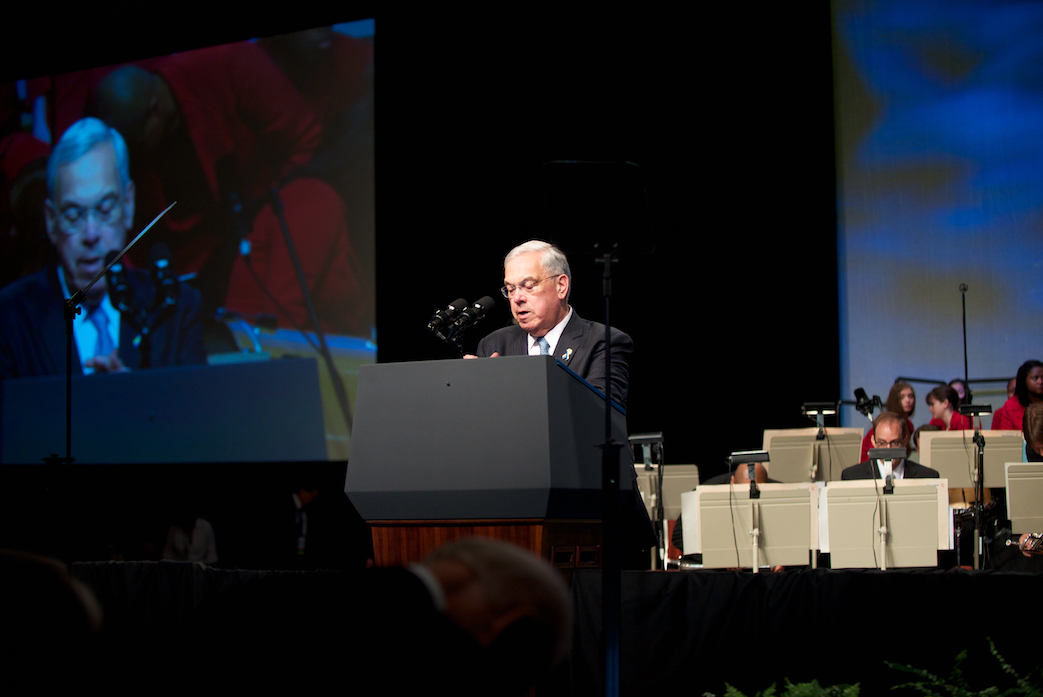 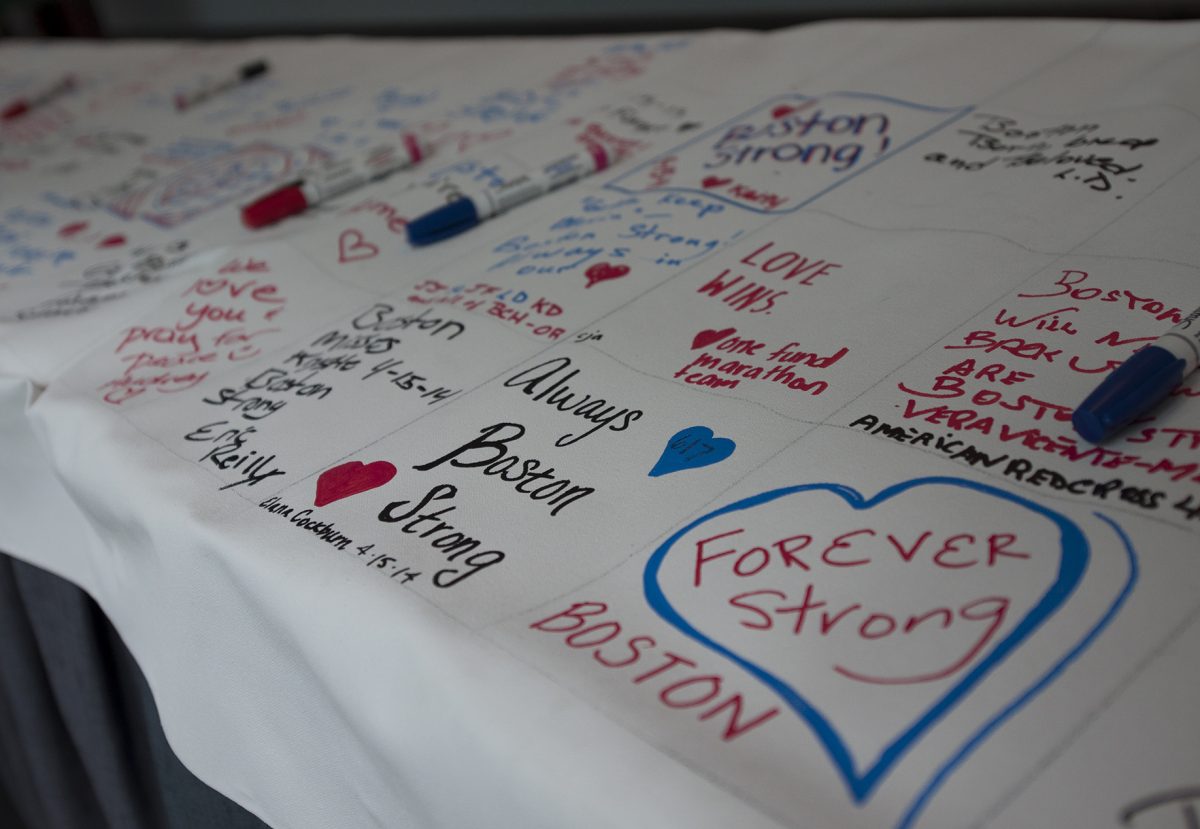 Messages to Boston mark some of the banners delivered by the organization "America 4 Boston"Photo by Natasha Velickovic, Happy Zebra Photography 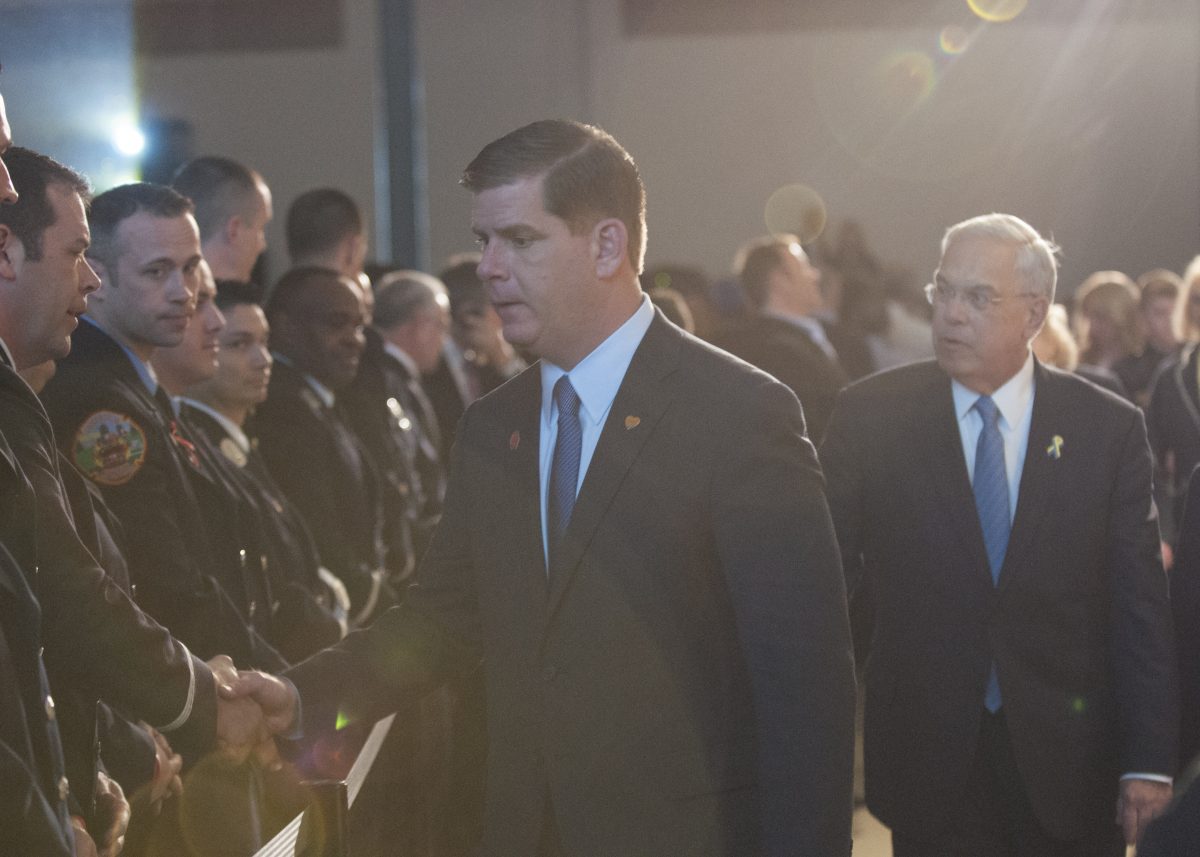 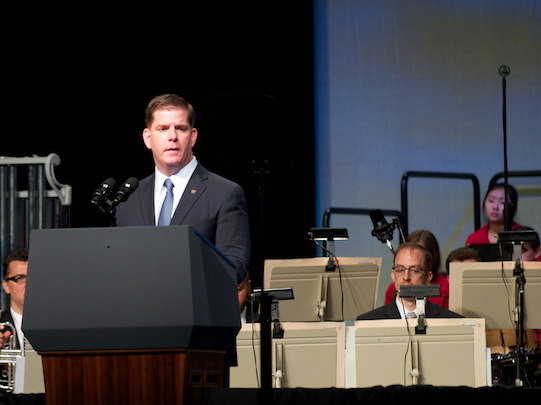 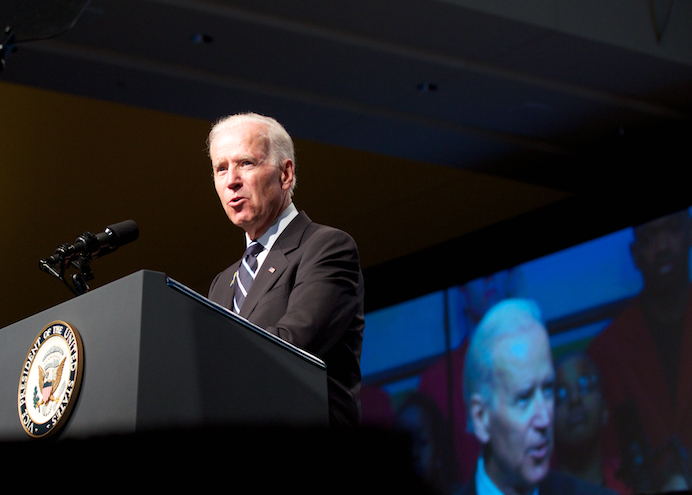 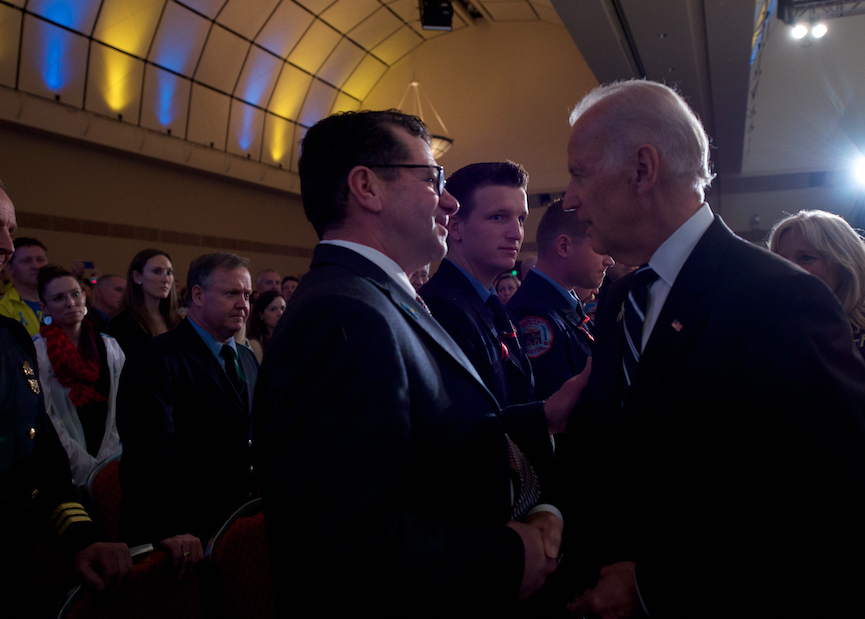