Fear of government reprisal has long cloaked Chinese homebuyers in a shroud of secrecy. Wealthy Chinese citizens rely on a small army of middlemen—brokers, lawyers, investment advisers, translators, and concierges—to guide their entry into Boston, and most of those people flat-out refused to connect me to their clients, citing “discretion” as the most valuable service they provide. “Usually they don’t tell us what company they work for or their full names,” explains Chen, the Wellesley Realtor, of the Chinese investors she brings on tours of Boston. “We never ask them anything about what they do in China.”

At one point, a local Chinese businessman let me know that two of his clients from the mainland were in town and looking to purchase real estate. They were interested in talking, but they wanted me to sign a contract promising that “their name and background should not be exposed to public because they do not want to get into trouble after returning back to China.” I bit, but then they melted away.

Cashing In
With so many Chinese eager to part with so much money, real estate agents have adjusted in ways big and small to accommodate their new clients. They’ve learned that proximity to public transit is a must, while proximity to a graveyard is often a deal-breaker. For many Chinese, addresses and closing prices that contain eights are good, and those that contain fours are bad (“four” and “death” sound alike in Mandarin). Realtors who don’t speak Mandarin or Cantonese are hiring assistants who do—and some are even studying the languages themselves.

Those who, unlike Chen, can’t regularly visit China and field representatives there are advertising online, though getting actual listings in front of Chinese eyeballs is a different matter. Because the government frowns on the exodus of its wealthiest citizens, American real estate listings are blocked. Piracini and her partner, Loren Larson, briefly paid a steep monthly subscription rate to list on the website of a luxury-home marketer who claimed to have connections deep inside the Chinese state and the ability to bypass the Great Firewall of China—before concluding that he was a charlatan and clawing back their money. Dino Confalone is one of many Boston Realtors who now habitually whip out their iPhone’s compass app whenever they case a new property (Chinese who practice feng shui prefer south-facing buildings). But he might be the only one who’s gone the extra mile: He put most of his money in a Citibank account so that when he takes out his wallet, Chinese clients see his Citi gold debit card, a status symbol he’s found they recognize.

Lining up behind the real estate agents is a whole cottage industry of legal, concierge, and even summer-camp services ready to take advantage of the free-spending Chinese. Gold rushes make odd bedfellows, and Zhennian Huang, a middle-aged Chinese chemist, and Scott Dunlop, a strapping 34-year-old teacher from Watertown, are a case in point. Over tea at Crema Café, in Harvard Square, Huang, accompanied by Dunlop, hands me a brochure that reads, “Boston—The Birth Place of America!” Then, gesturing excitedly, he tells me his story through a translator. Huang came to the States in the ’90s and built a career as a distinguished chemist. But money is a potent catalyst, and last year he reacted to his wealthy countrymen’s growing interest in Boston, abandoning academia and starting a business funneling rich Chinese kids into local summer camps, where they’ll interact with local campers and improve their English.

Last summer, Dunlop was working as the director of a camp in Marlborough when the gawky scientist with glasses and a bowl cut showed up and starting asking all sorts of questions. Dunlop immediately grasped the promise of the business model and offered to partner with him. “Zhennian is like, ‘I’m glad we have a white guy,’” Dunlop confides as Huang yaks with our translator (many Chinese feel things are on the up and up when dealing with natural-born Americans). The promotional video for their new venture, Langley Educational Consulting, opens with Dunlop in a classroom, seated in front of an American flag, encouraging Chinese youngsters to “experience the summer of a lifetime,” before segueing into footage of galloping stallions, bald eagles, Boston landmarks like Fenway Park—and the Statue of Liberty, accompanied by U2’s “Beautiful Day.” In their first summer, they ran a pair of one-week sessions, placing kids at Concord Academy’s camp (Chinese students recognize Concord from their American history textbooks). They put the kids and many of their parents up at an extended-stay hotel in Burlington, from which the parents could shop at the mall and scope real estate.

Capitalizing on Boston’s incoming flood of Chinese immigrants brought Cheng Xu to the city as well. Xu, a native of Inner Mongolia in China’s north, says that he came to Boston on an EB-5 visa from Dubai to expand his business. I meet him around a polished wooden conference table at the Milk Street offices of Connie Dai, a Chinese-born commercial attorney and one-time paralegal for Coca-Cola in Shanghai. As he leans forward in his chair, exposing the keys to a Mercedes in his back pocket, he says to me: “As-salaam-alaikum. Wa-alaikum-salaam.” It’s both the call and response of the standard Arabic greeting—“Peace be unto you. And unto you, peace”—proof he picked up some of the vernacular in his 11 years in the desert.

Normally, Boston doesn’t rank alongside Dubai in global commercial clout, but when Xu’s company, Little Lamb, a hot-pot restaurant chain with 600 locations in China, was looking for a base for its North American conquests, the Hub got the nod. Markets like California, New York, and Vancouver are too crowded with businesses catering to the Chinese clientele, Xu says. Boston, by contrast, is wide open, with growing numbers of Chinese students, scientists, and tourists. Last year, Xu opened Little Lamb’s first North American restaurant at the foot of Beacon Hill on Cambridge Street, supported by a central kitchen in Needham that will serve all of his locations in North America.

Xu now lives in Quincy with his wife and a son who works for a Woburn tech company, but he hopes to eventually buy in Wellesley. He has close-cropped salt-and-pepper hair and wears the standard uniform of Chinese businessmen in warm climates: a rumpled polo shirt. “Boston is an old city,” he tells me. “Boston has a longer history than Dubai. That’s good. I like Boston very much.”

The Human Cost of Growth
There is concern that Boston’s Chinese real estate boom will turn the city into a ghost town, like London. In that city, many of the wealthy international buyers never bother to visit their properties or rent them out. While the city’s rents are sky-high, some of its poshest neighborhoods sit largely empty: The Guardian reported in January that a third of the mansions on the priciest stretch of the Bishops Avenue, the second-most-expensive street in Britain, are vacant, many of them decaying. To combat the housing crisis, London’s mayor has called for a steep tax on vacant properties. It’s happening in New York, too. Last November, a Realtor in Brooklyn told the New York Times that about 70 percent of her sales were to hedge funds and other investors.

So far, Boston’s foreign real estate buyers are either living in their properties or renting them out. Even at Millennium Place, Boston’s flashiest luxury development, owners aren’t leaving their units dark, says Baumert, of Millennium Partners, its developer. “Not to say that it won’t happen here,” he says. “I think that it’s coming.” Baumert says the practice could get rolling with his firm’s Millennium Tower, the 60-floor luxury high-rise going up at Downtown Crossing. Already, some of city’s poorest residents are feeling the squeeze: Last November, WBUR reported that luxury real estate investments made by “Chinese nouveau riche” were contributing to a rental crisis in Chinatown that was pushing residents out. In February, the Chinese Progressive Association, a Chinatown activist group, marched from the Chinatown Gate to Millennium Place, where they protested that Millennium Partners was leading gentrification in the heart of the city and not doing enough to support affordable housing.

In fact, Chinese-fueled investment is spreading rapidly throughout Boston, in every direction, and it’s growing every day in every neighborhood. At the end of Cutter Park, a tiny Davis Square cul-de-sac, a tattered little American flag sits atop a wooden fence post outside a powder-blue two-family house, flapping lazily in the breeze, which today is doing little to beat back the heat. The place backs onto a parking lot. It doesn’t look like much to me, but the Chinese have fresh eyes and see hidden value everywhere.

The owner of the house, silver-haired and wearing a brown “Coconut Jack’s” T-shirt, is just leaving when real estate agent Qingli Jiang and her client, Ling—rolled-up newspaper in her left hand, miniature iPad in her right—come striding up from the street. “The Realtor’s not here,” the owner informs them in a Boston accent.

“She’s not here,” he insists gruffly.

“Oh,” says Jiang, after some hesitation, as the owner walks off. She starts explaining this to Ling, in Mandarin, when the Realtor’s arrival rescues the middle-aged pair from their momentary dismay. Ling bows curtly. She’s come a long way to see this slice of Somerville. Four of the 10 properties Jiang had picked out for viewings have already been snapped up in a sizzling-hot summer market (the average multi-family in Somerville spends 34 days on the market).

Once upstairs, Jiang asks the usual questions about the wiring and the floors. Ling, who provided only her given name, wanders around snapping photos on her iPad. She’s wearing a loose teal dress and a wispy white-and-blue scarf, a golden pendant inscribed with Chinese characters hanging from her neck.

Ling’s the publisher of a real estate newspaper in northeastern China, and she’s deathly afraid that new technology will again blindside her the way the Internet hit the newspaper business (with Jiang translating, she keeps asking me which of Boston’s publications make the most money). So she’s been touring Silicon Valley and New York City to learn about emerging technologies. She’s cast a wary eye on wearable computing, a concept that briefly defies translation as Jiang and I struggle to interpret a series of gestures she makes at her eyes, feet, and wrist.

Before returning to China, Ling detoured to Boston to get a feel for the rental market with a whirlwind tour. When I ask Ling why she’s looking to invest in the area, she needs no translator. “Because of Harvard University!” she responds, beaming.

Ling got in yesterday. She’ll be gone by tonight. Later, when the right property comes on the market here, she’ll buy it from China, sight unseen.

The Chinese Boom, by the Numbers 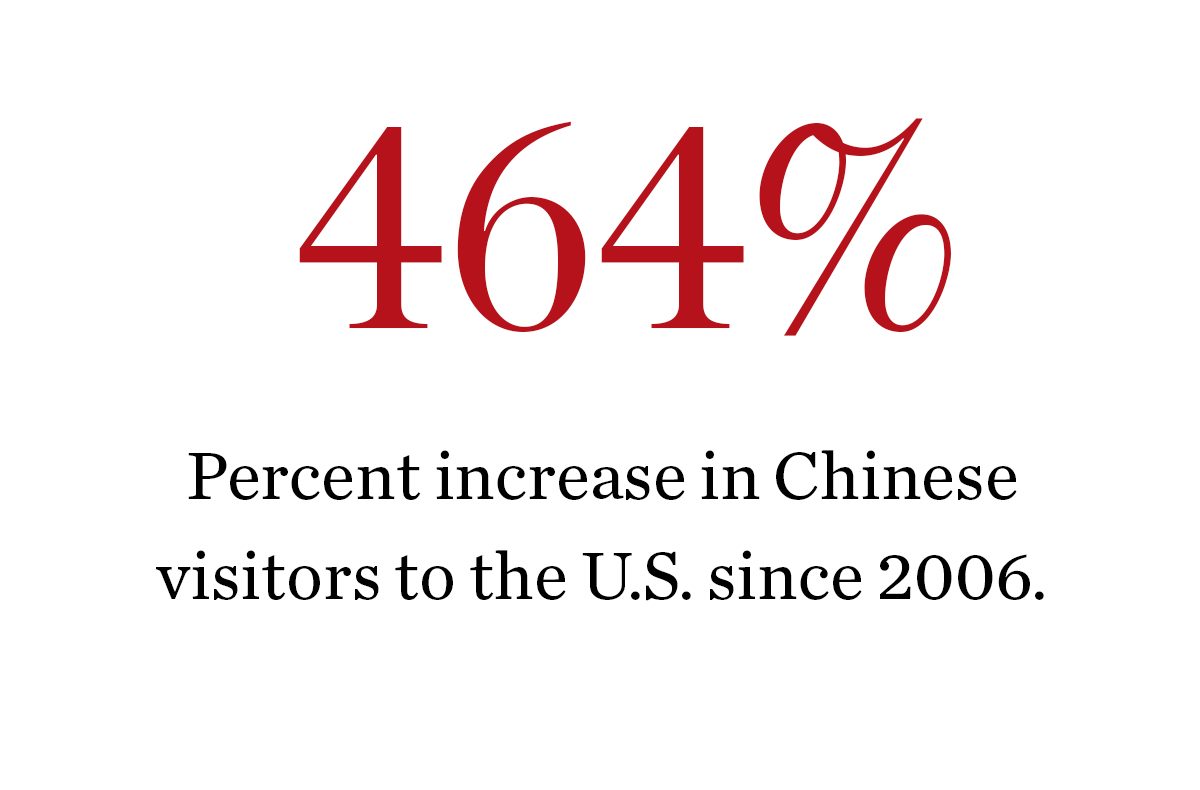 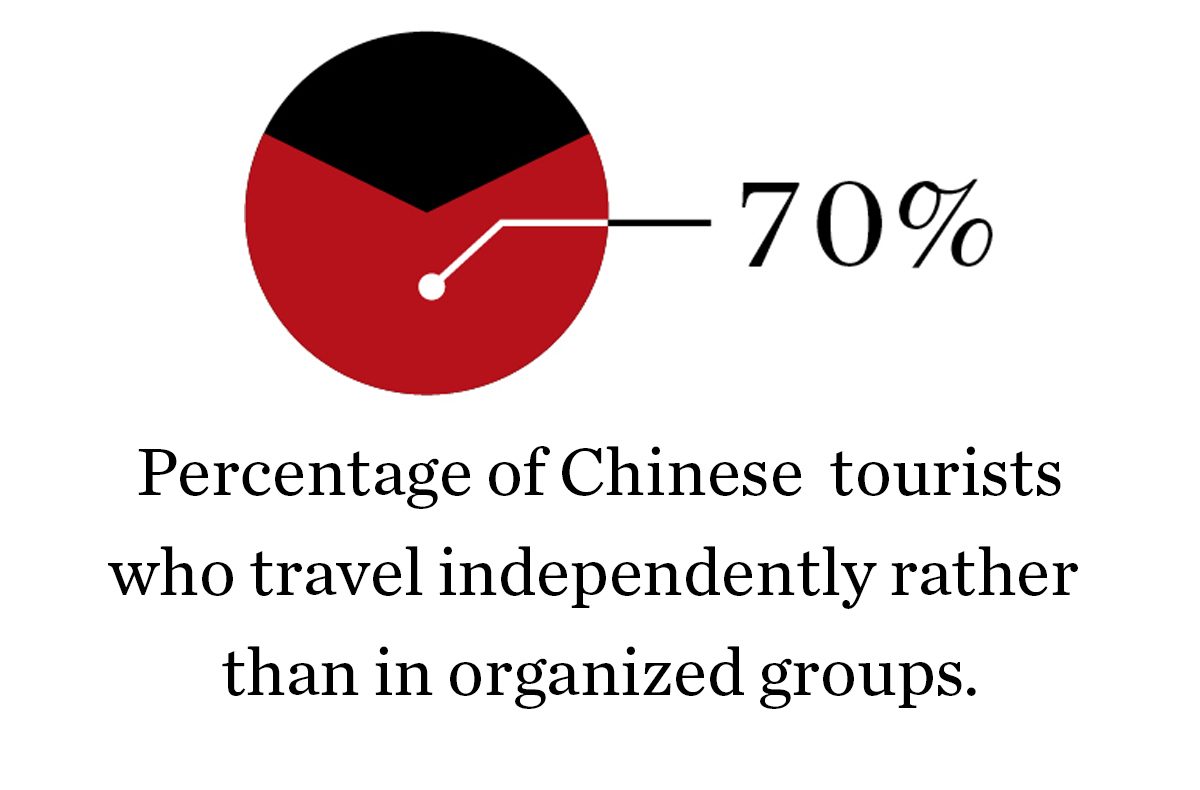 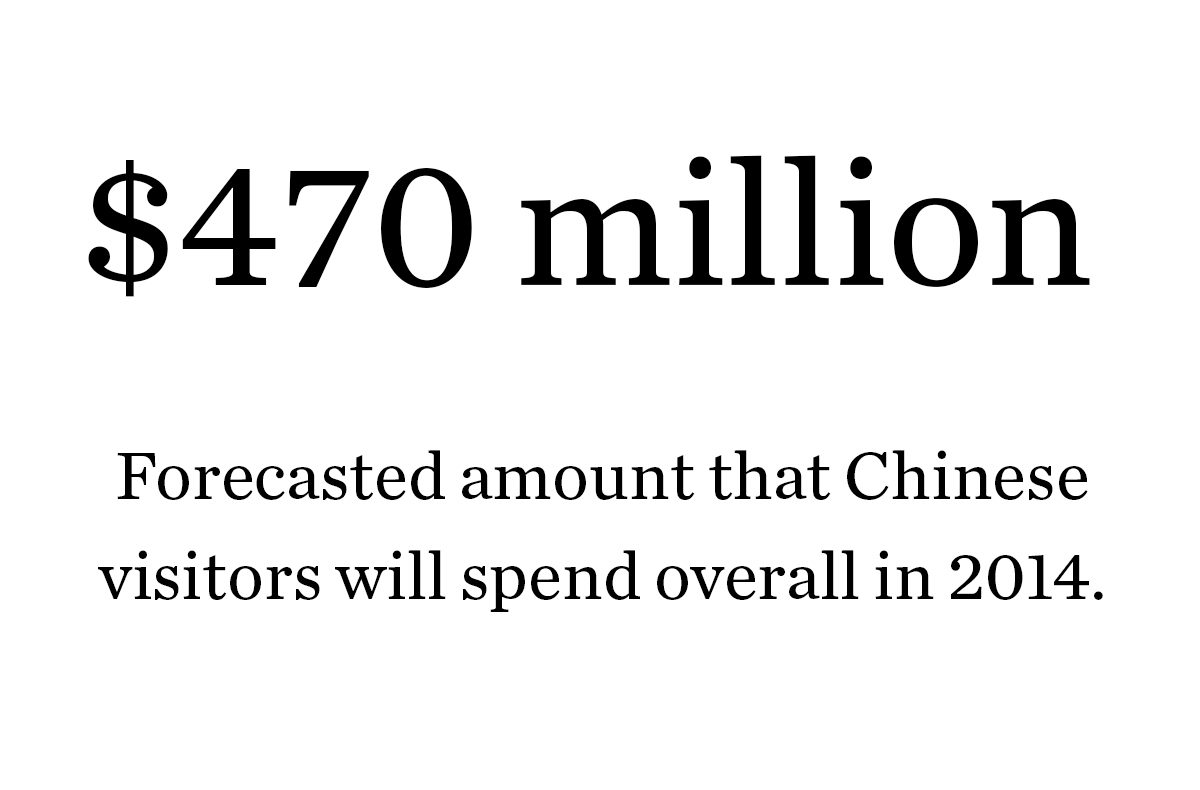 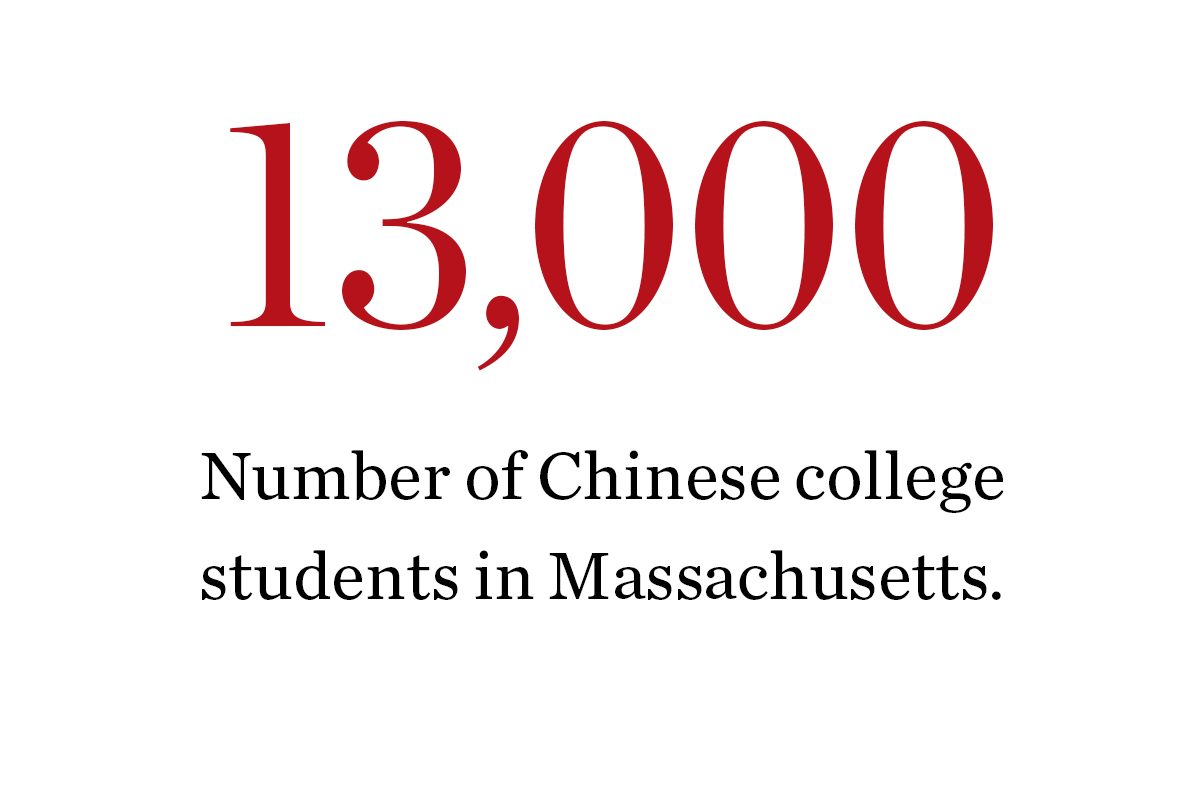 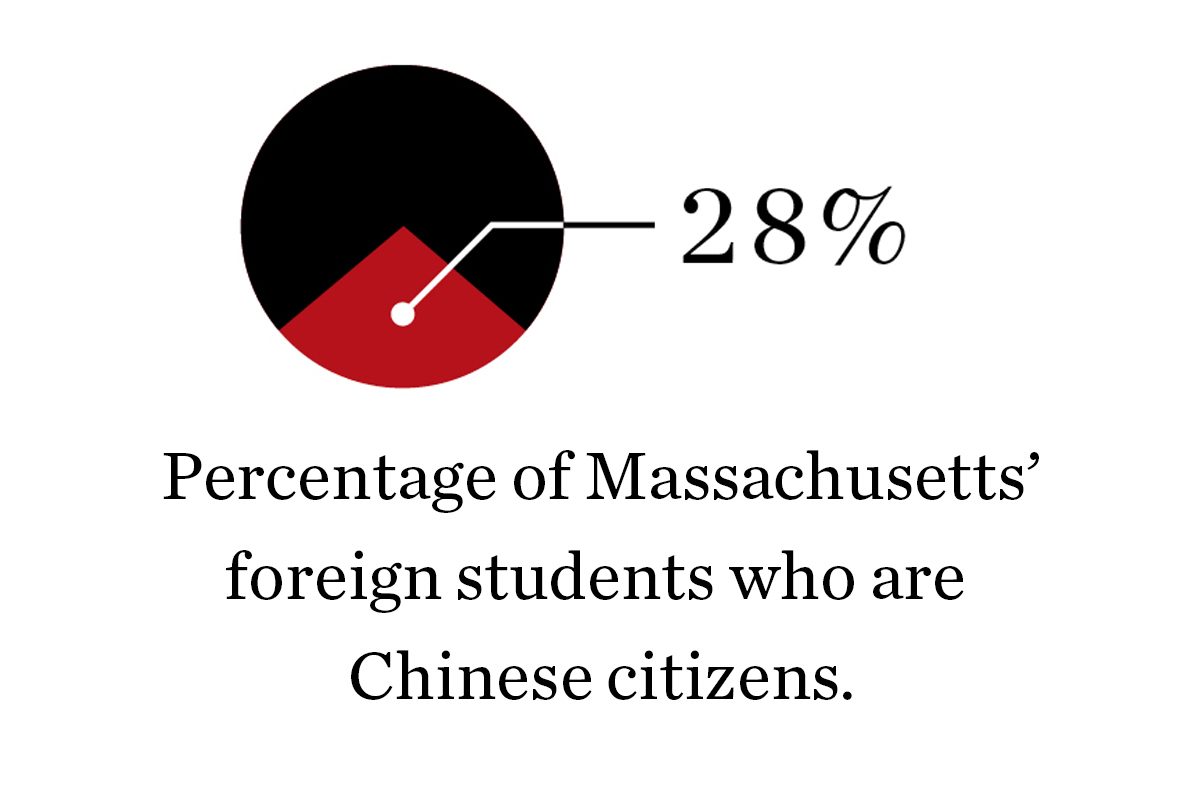 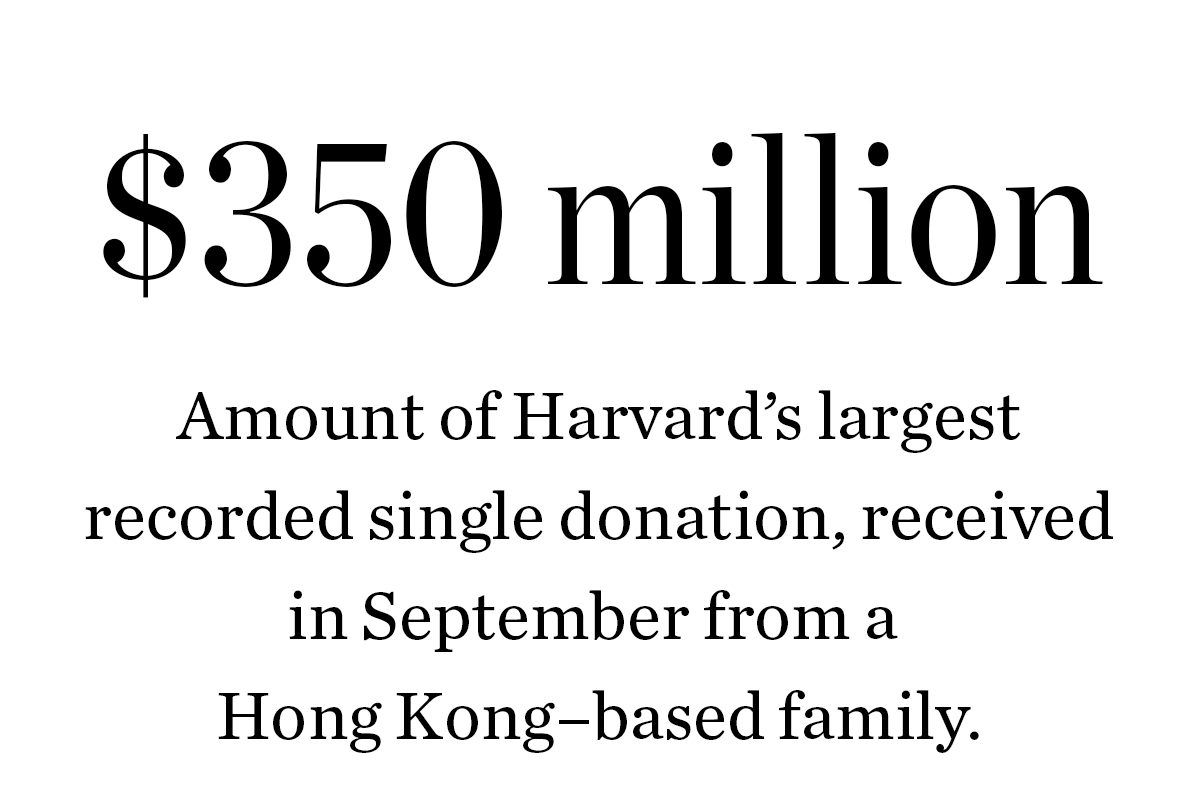 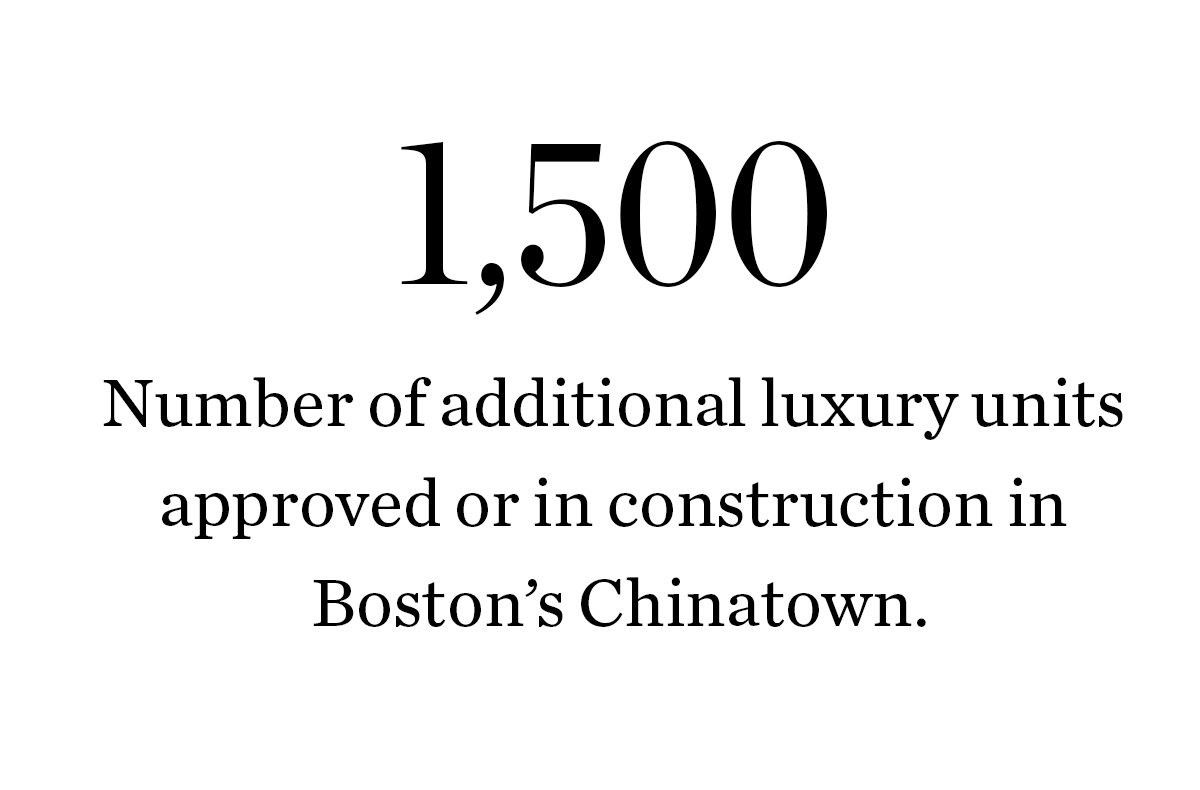 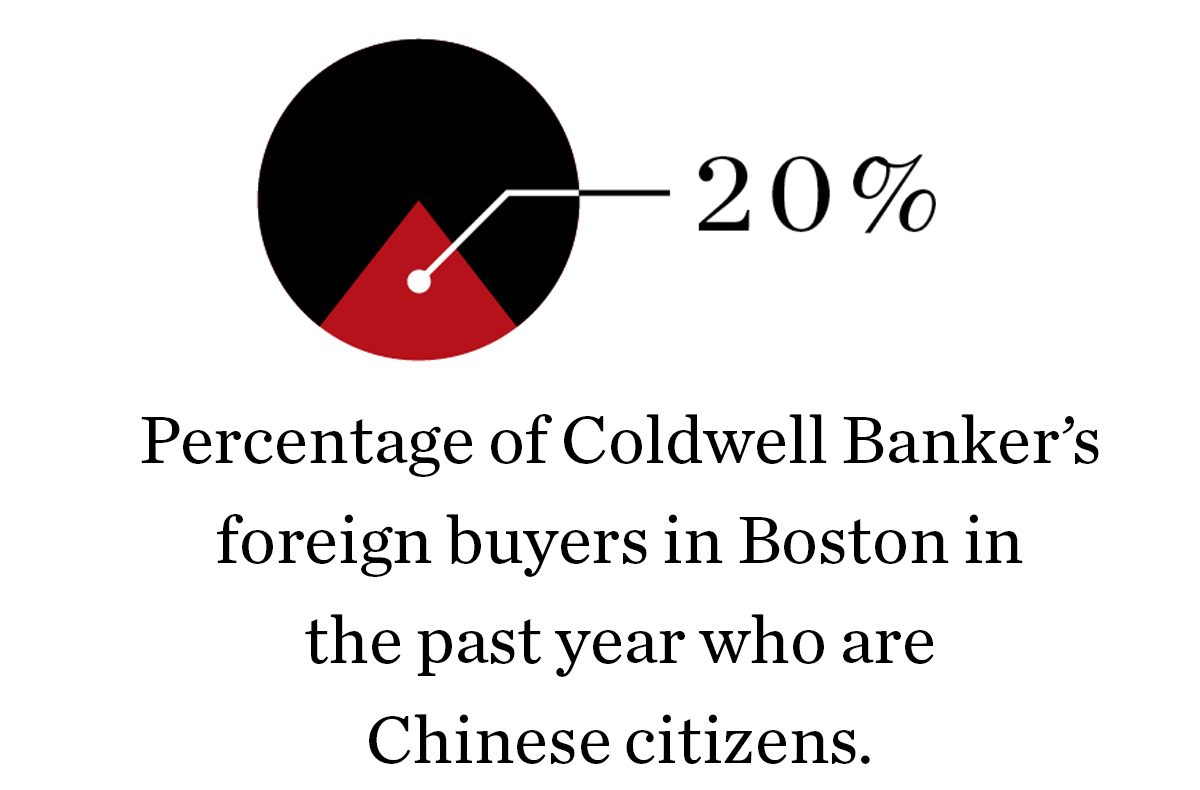 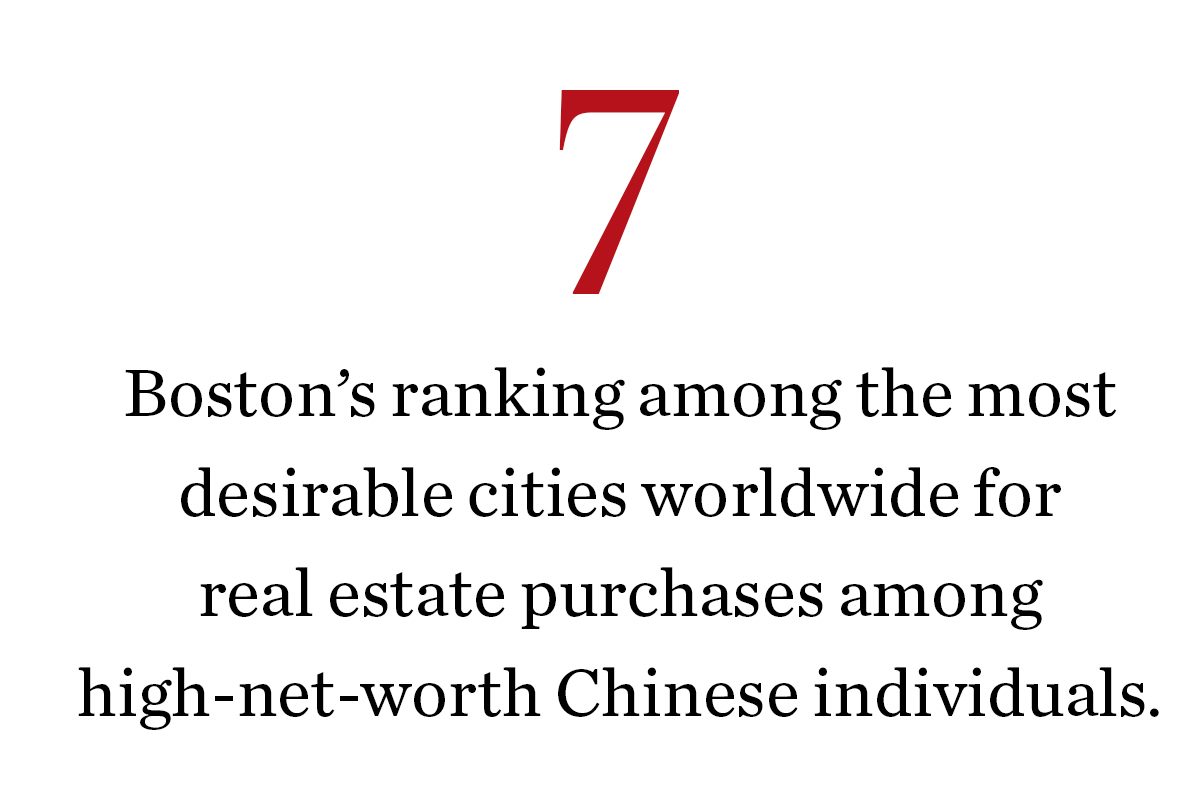 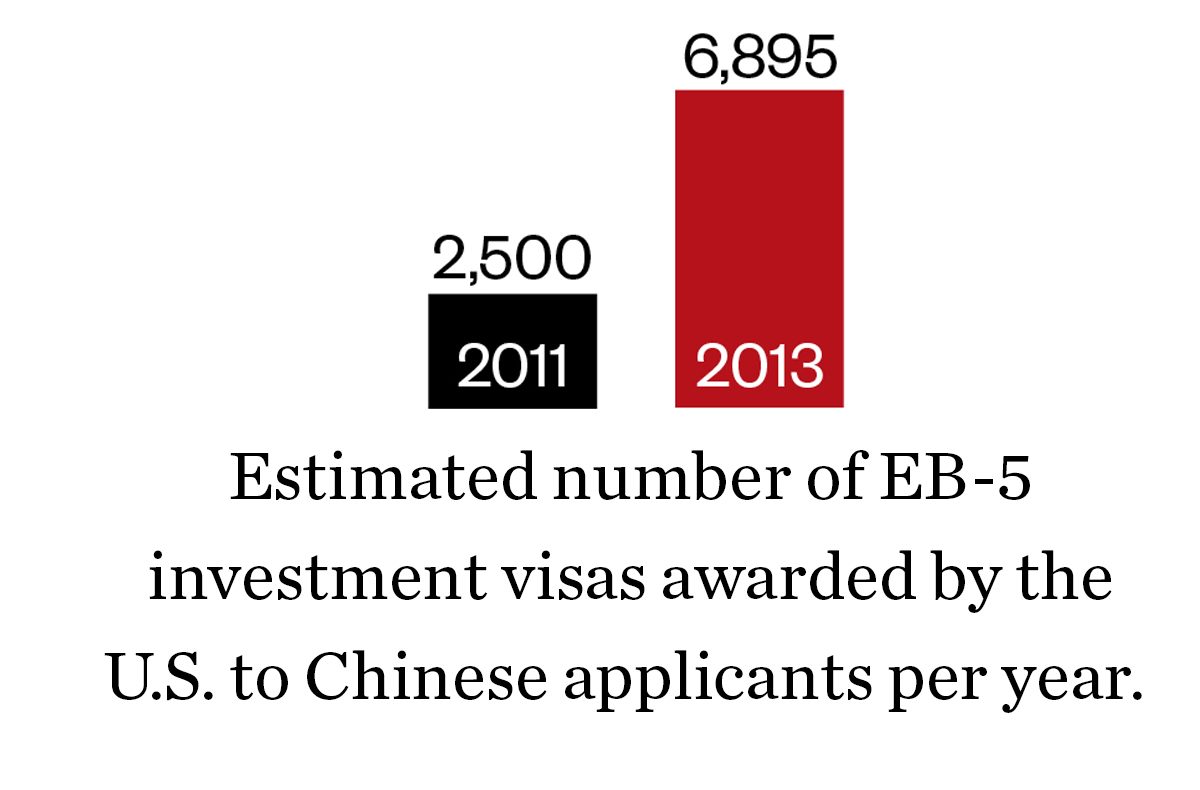 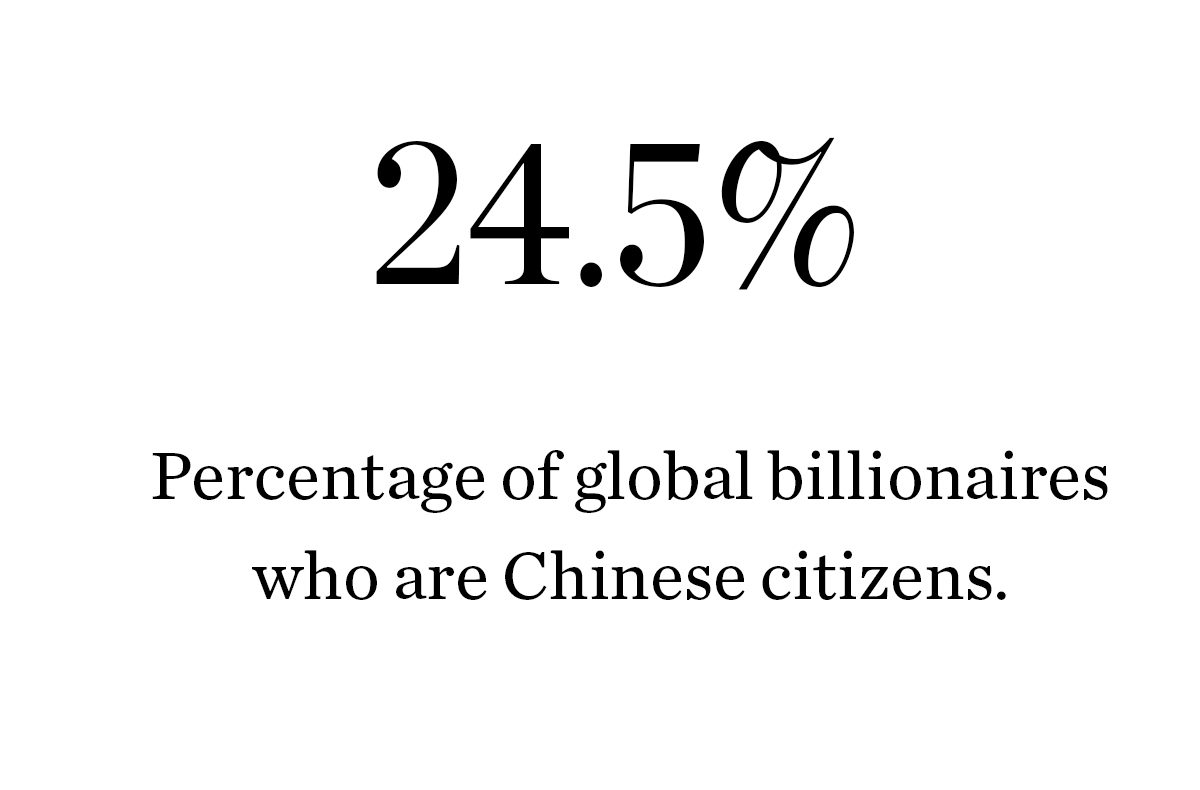 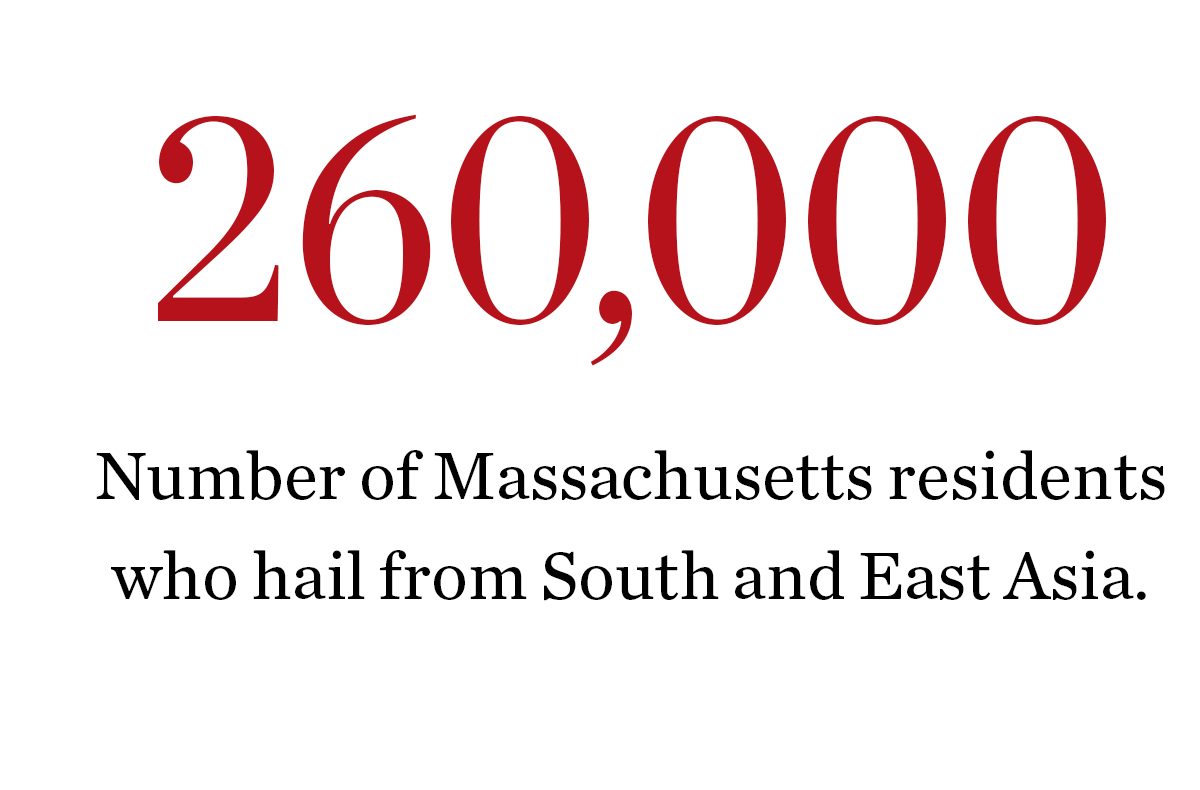