The opening of the 10-pound box from the era of Paul Revere and Samuel Adams took place at the Museum of Fine Arts on Tuesday night. In an event held Tuesday night at the MFA, the media and a number of guests watched as Pam Hatchfield, the museum’s head of objects conservation, and Michael Comeau, executive director of the Massachusetts archives, worked together to extract the objects in the capsule. Hatchfield, who assisted in removing the box from the cornerstone, and Comeau were careful when approaching the extraction process to avoid causing any damage. “The care and preservation of these materials are very important to us,” Comeau said. “[These materials] have been entitled to us by generations past to protect and preserve.”

This time capsule was first placed inside the building in 1795 by Samuel Adams, Paul Revere, and William Scollay. About a century later, when the capsule was found during a restoration project in 1855, more items were added to the box, and it was replaced back into the massive granite cornerstone.

Just before going into the box, Hatchfield explained that she loosened its screws prior to this event, and also went around the top of the box with a fine chisel to loosen the top. “Or else you’d be sitting here watching me do this for three days,” she joked.

The small box was packed tightly, which was visible as soon as Hatchfield took of the box’s cap. A newspaper sat on top, which was carefully folded. Underneath was a collection of 24 coins in various denominations dating from the 1650s to the 1850s. More newspapers were folded inside and appeared to be in very good condition, according to Hatchfield. Dates and subjects of the newspapers, however, were not possible to read. Also in the box was a copper medal of George Washington, a Seal of the Commonwealth of Massachusetts, and a silver plaque inscribed by Paul Revere and Samuel Adams.

Malcolm Rogers, director of the MFA, says the capsule’s contents will remain in conservation, but hopes to put the items on display at the museum at some point this year. Hatchfield also says she’s not sure if it’s important that the papers ever be unfolded. Thanks to archives dating back centuries, she says, “they’re not presumably unique.”

So will officials decide to carry the tradition by adding new items and placing the box back in the cornerstone? William Galvin, Secretary of the Commonwealth, said, “The governor has wisely suggested we might. So we’ll think about it.”

“This is the most exciting project I’ve ever worked on,” Hatchfield said, who revealed she’s been to places like Egypt and has extracted objects some 4,000 years old. “This is what we as conservators live for.”

Below, see the collection of the time capsule’s contents. 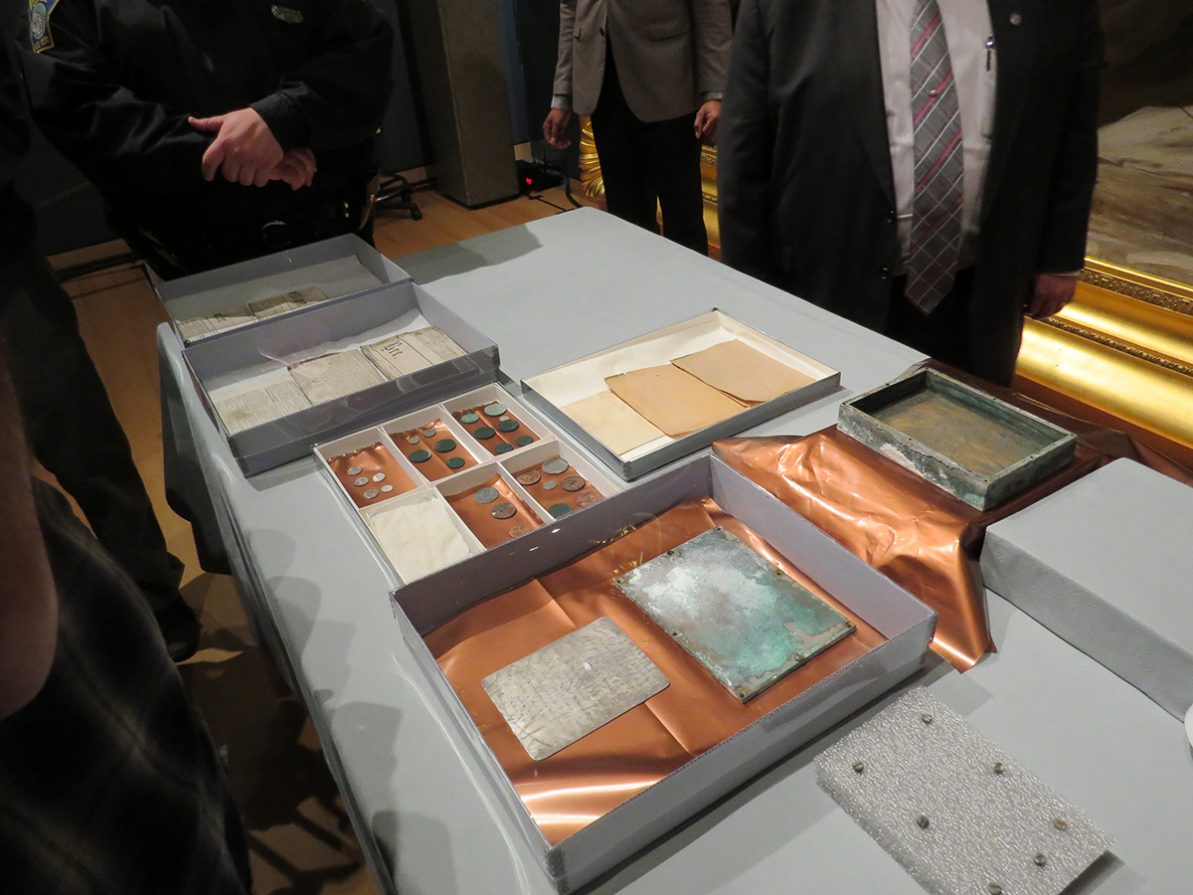 The contents on display immediately after the capsule's extraction.PHOTOS BY BRYANNA CAPPADONA 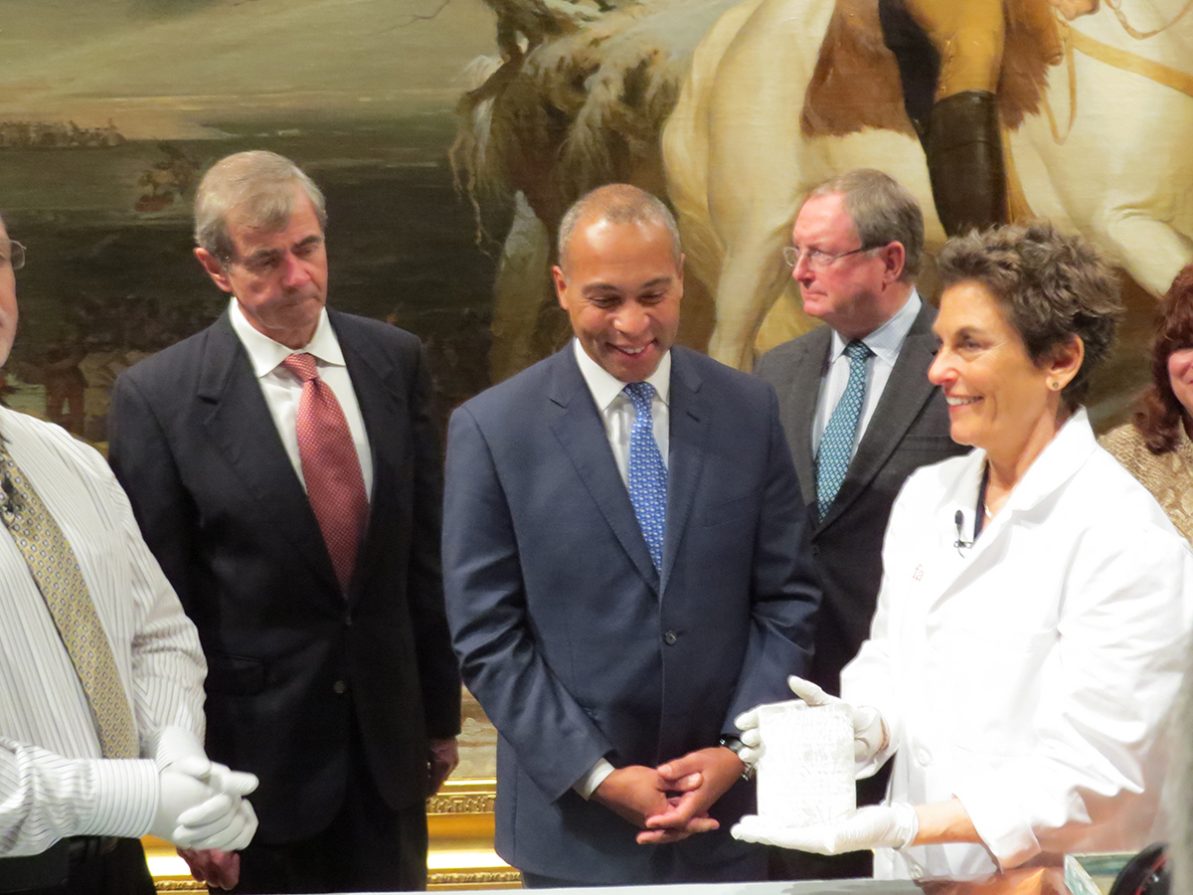 Governor Deval Patrick poses next to the contents with Pam Hatchfield.PHOTOS BY BRYANNA CAPPADONA 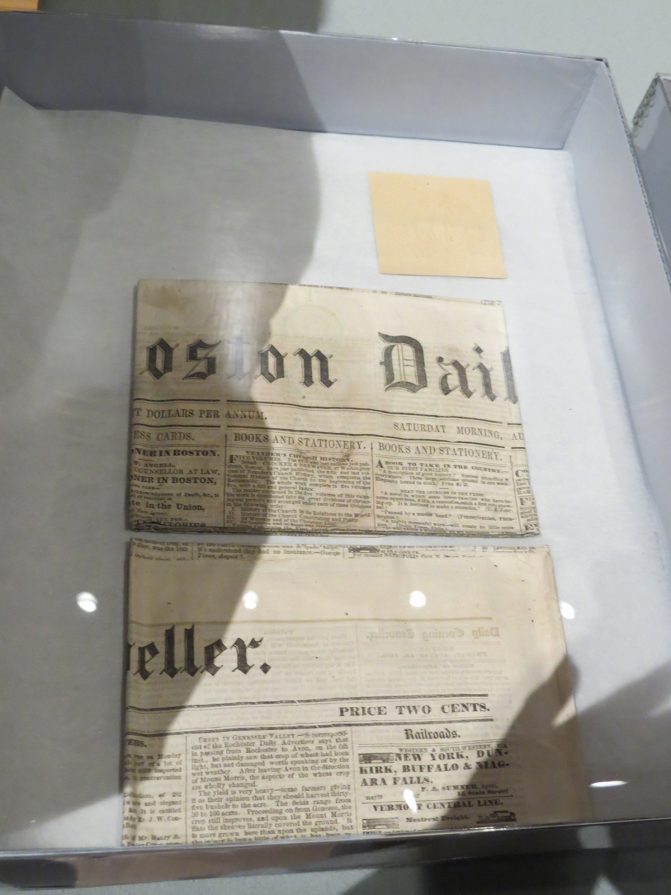 Above, the Seal of the Commonwealth. Below, two folded newspapers, in which the dates and subjects are not readable.PHOTOS BY BRYANNA CAPPADONA 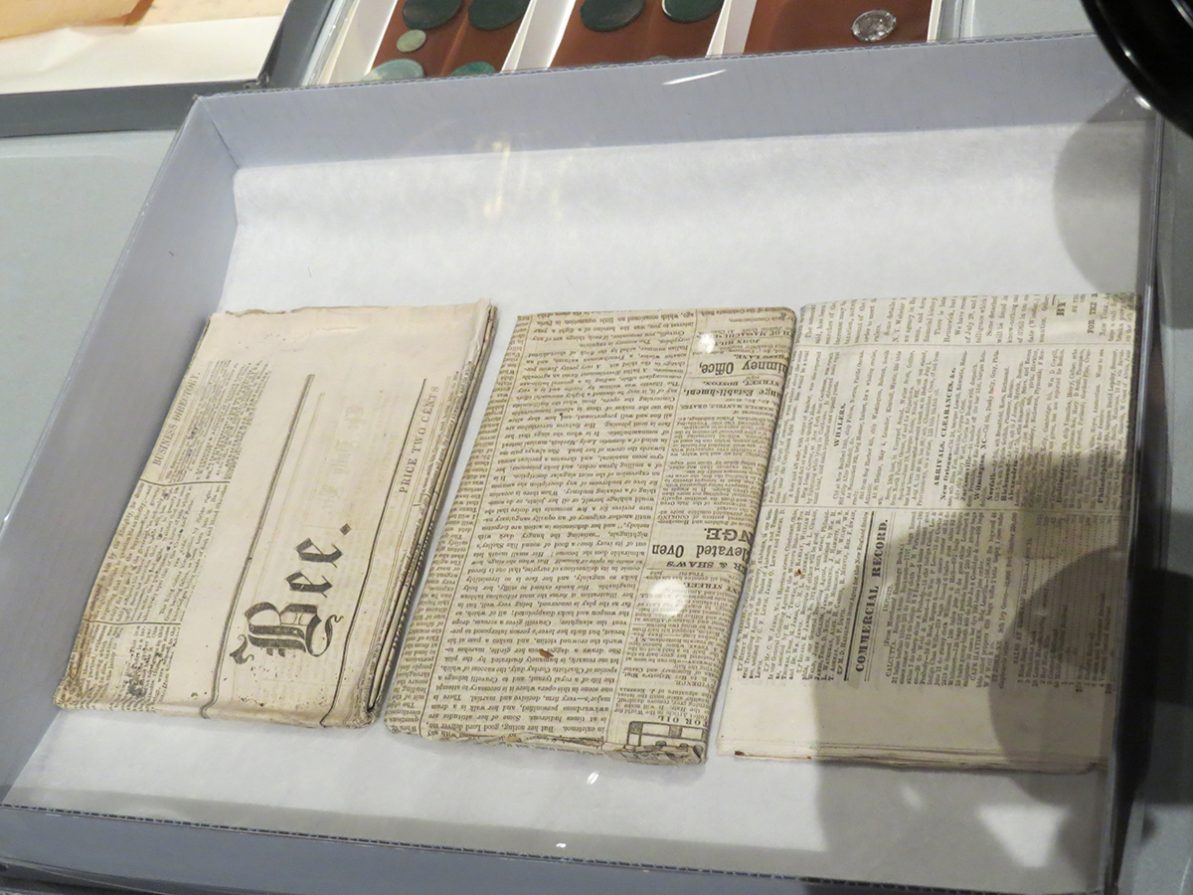 Three more newspapers from the capsule, one of which appears to be the Boston Daily Bee.PHOTOS BY BRYANNA CAPPADONA 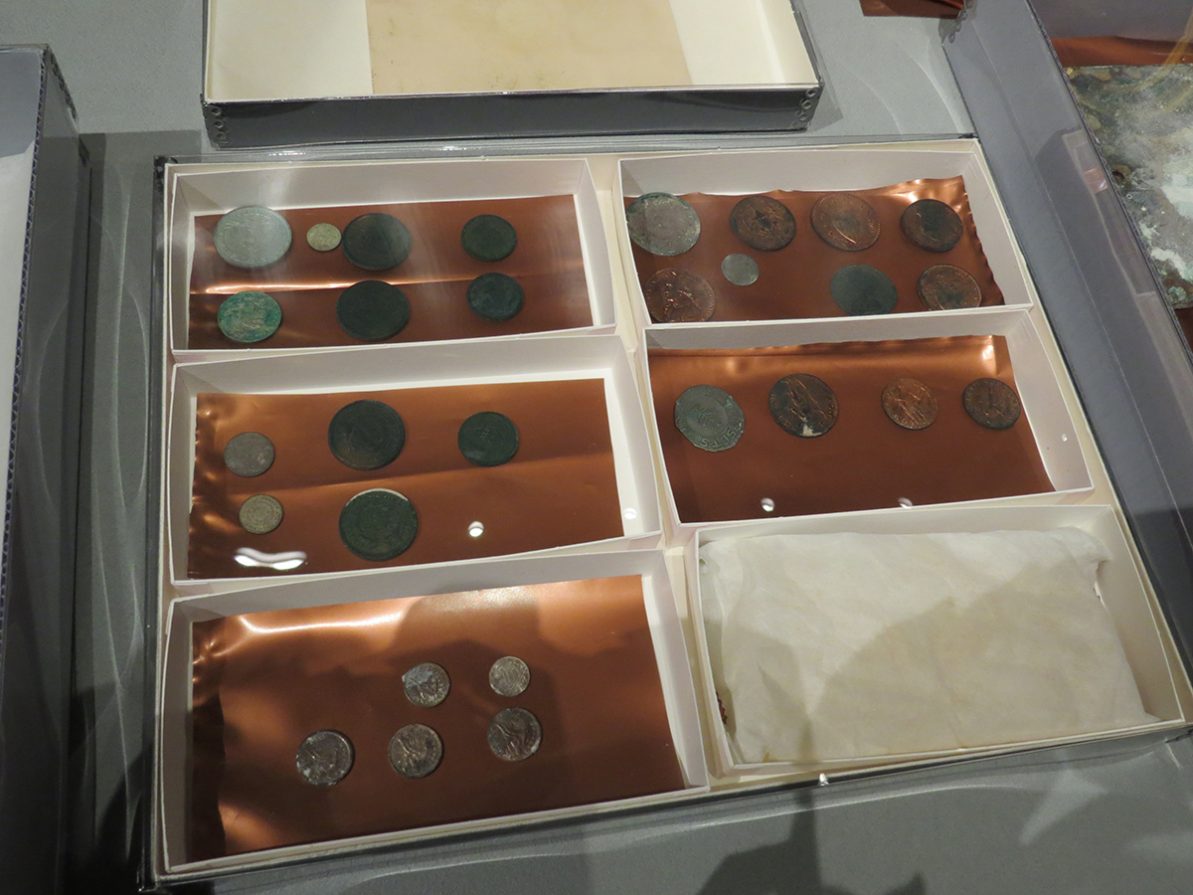 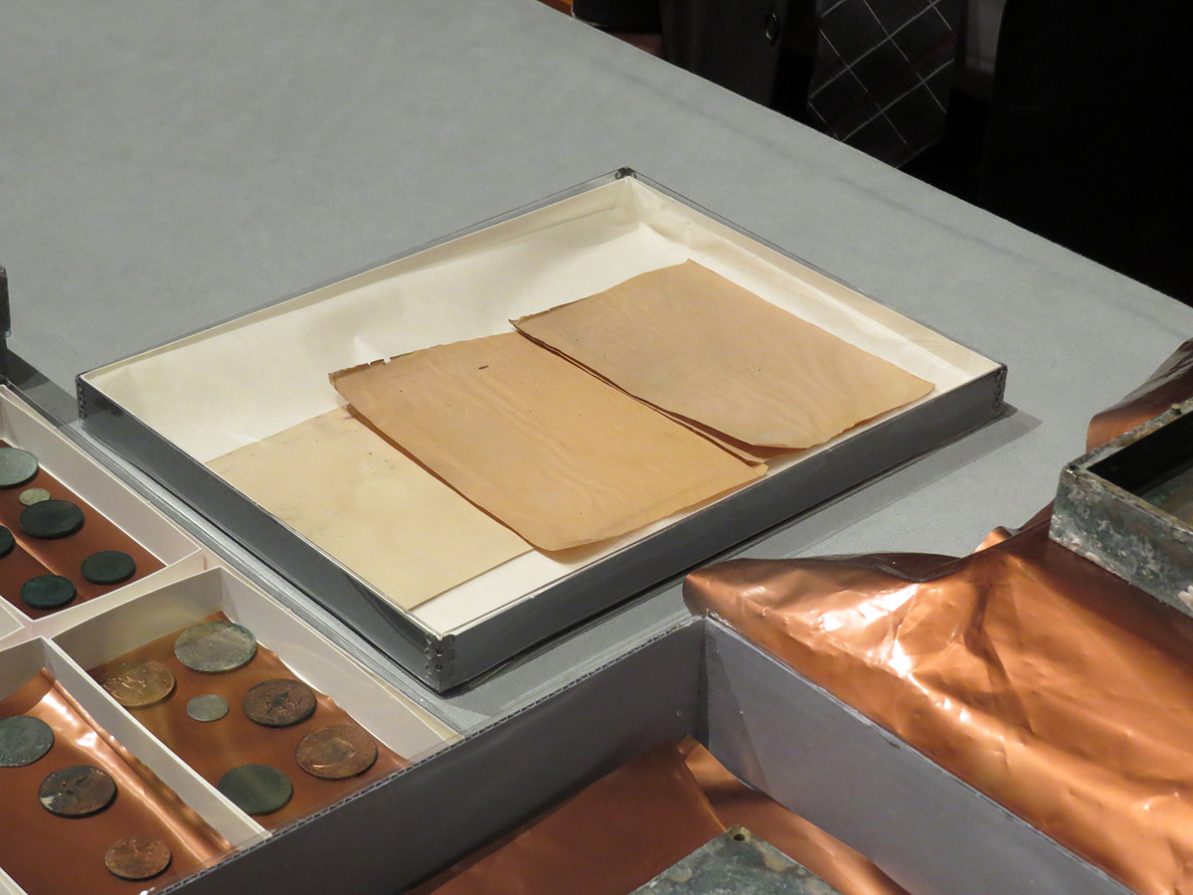 Pieces of light parchment were used to protect and separate the copper plaque.PHOTOS BY BRYANNA CAPPADONA 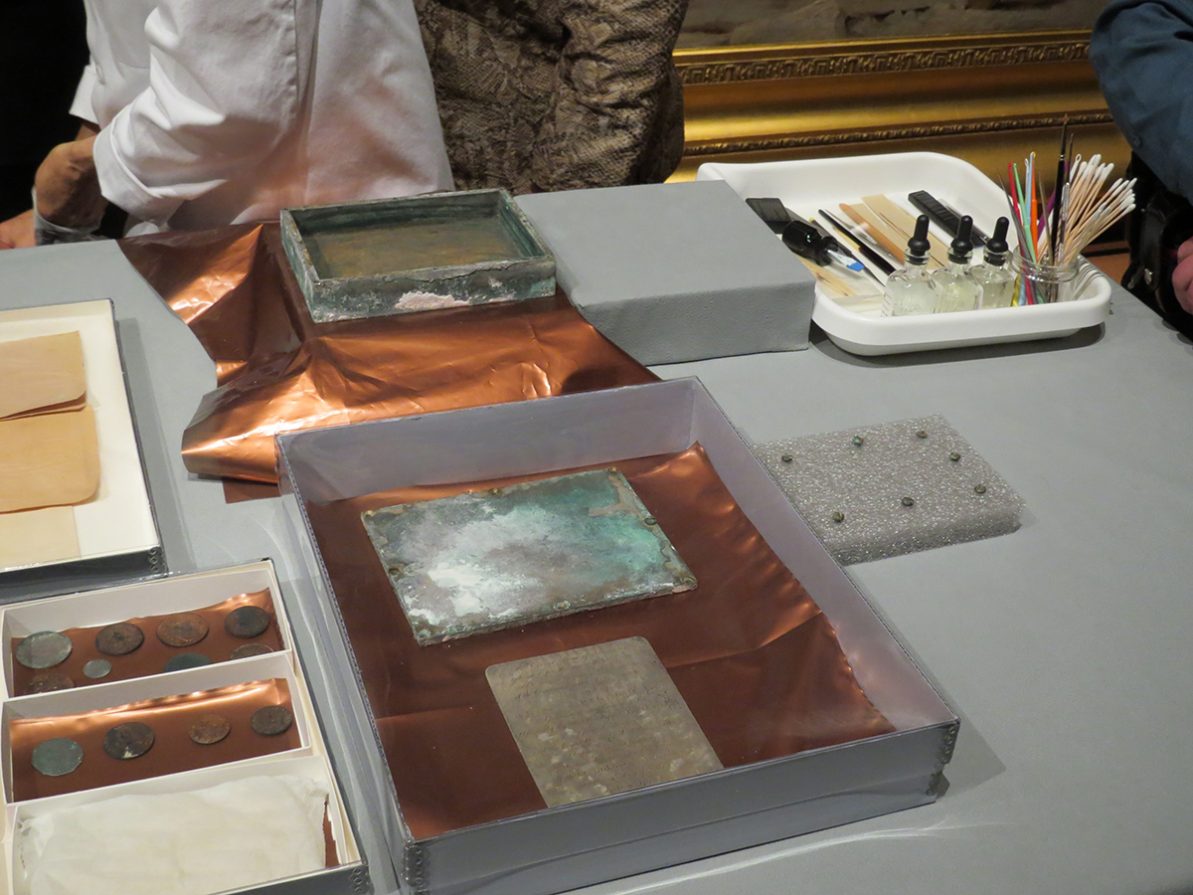 Above, the empty capsule box. Below, the top of the time capsule with the inscribed plaque.PHOTOS BY BRYANNA CAPPADONA 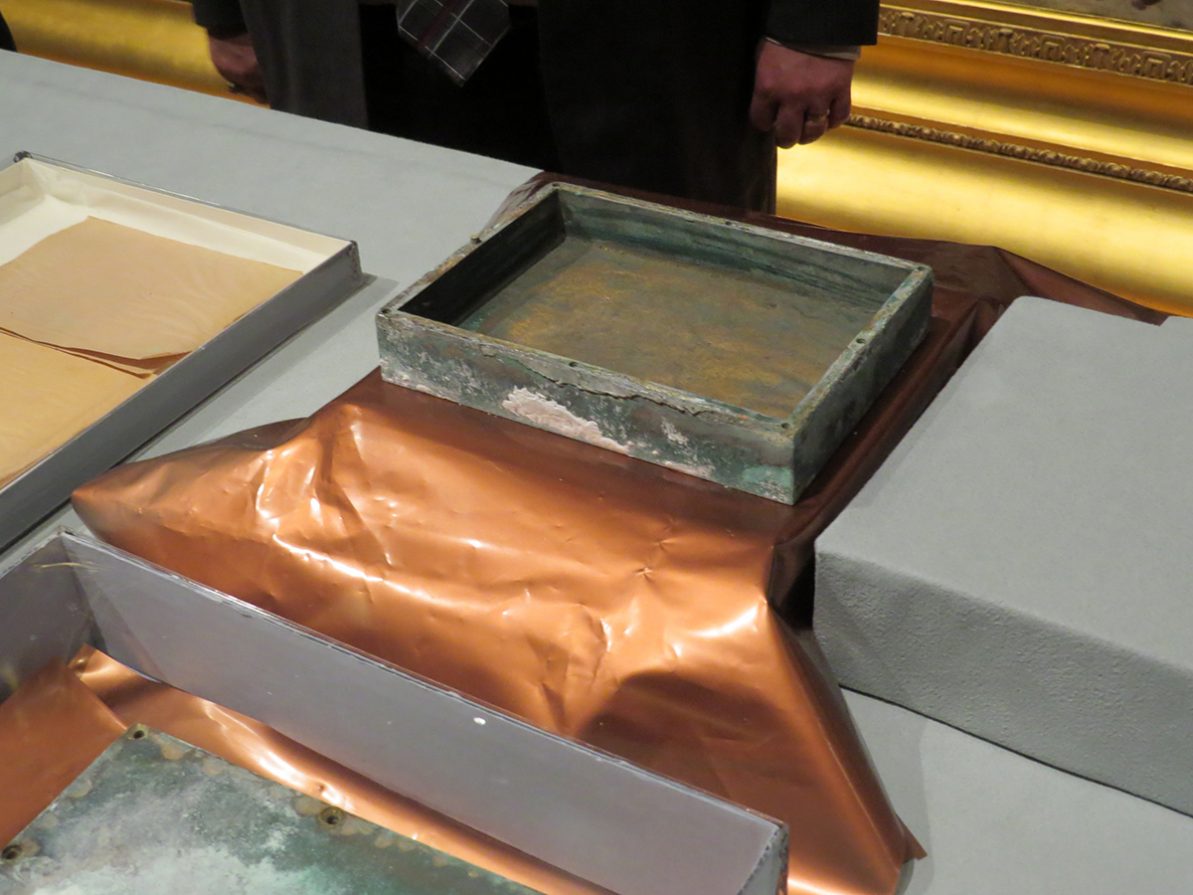 A birds-eye view of the empty box. Its dimensions are 5.5 x 7.5 x 1.5 inches.PHOTOS BY BRYANNA CAPPADONA 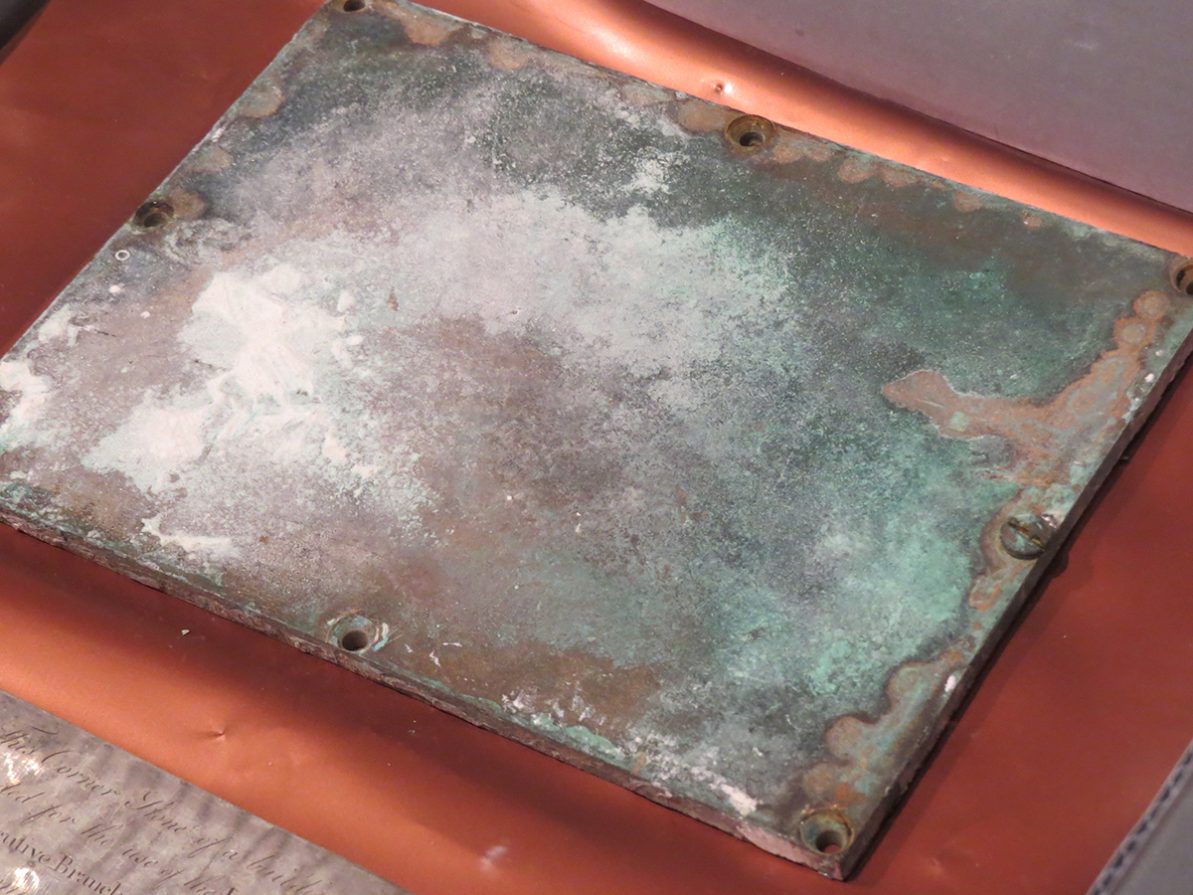 A closer look at the box's top. The capsule is made from copper and zinc.PHOTOS BY BRYANNA CAPPADONA 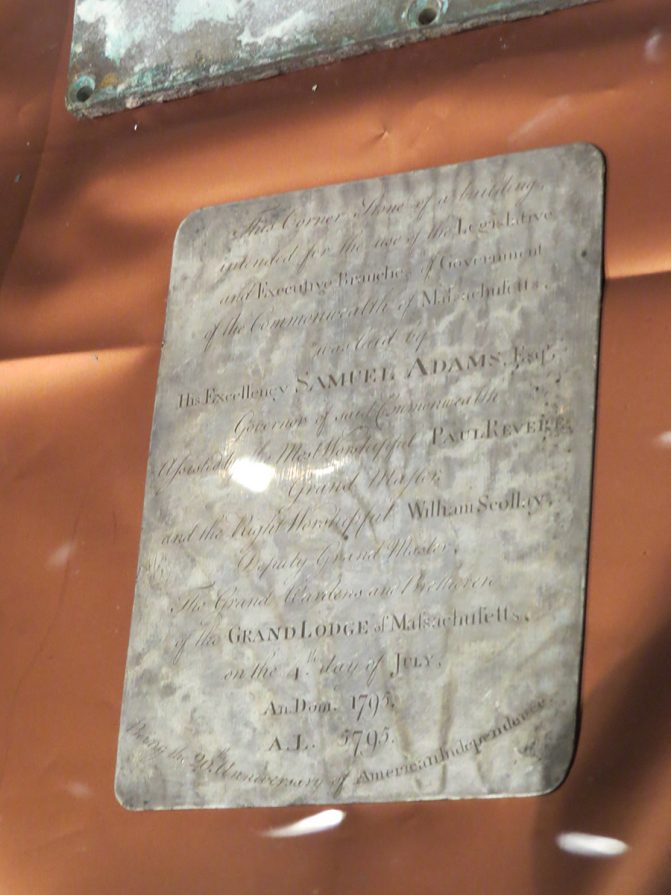 A closer look at the plaque inscribed by Paul Revere and Samuel Adams.PHOTOS BY BRYANNA CAPPADONA 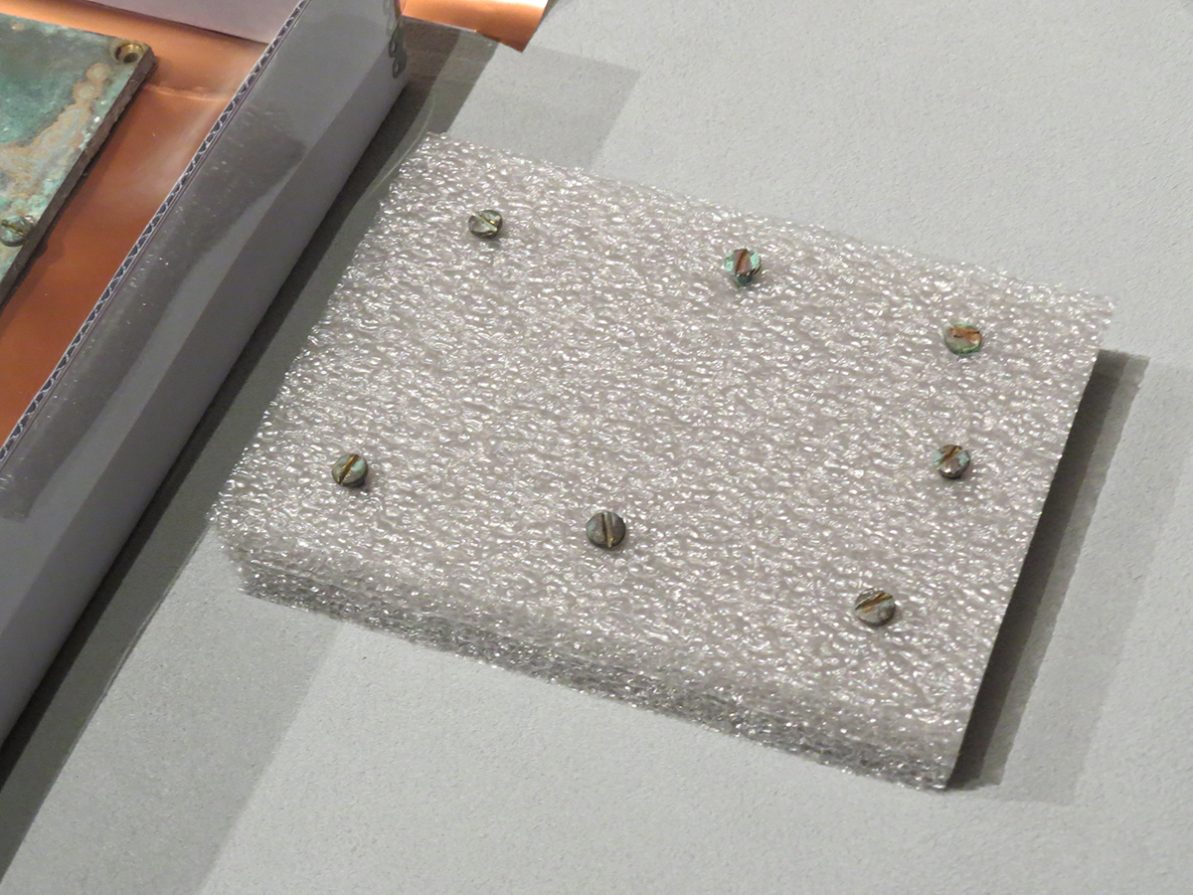 The capsule's screws preserved in a styrofoam sponge.PHOTOS BY BRYANNA CAPPADONA