Members of the Richard family helped Mayor Marty Walsh unveil commemorative banners on Boylston Street this morning. The mayor will hold a moment of silence at 2:49 p.m. and encourages people to share acts of kindness throughout the day. Two bouquets of blue and yellow flowers were left on Boylston Street Wednesday morning, one at each explosion site. / Photo by Olga Khvan

Church bells will ring out across Boston this afternoon, following a citywide moment of silence held at 2:49 p.m. to mark the exact time when two years ago, the first of two bombs exploded near the finish line of the Boston Marathon, killing three and wounding more than 260 others. Mayor Marty Walsh will lead the moment of silence at City Hall Plaza, mirrored by Gov. Charlie Baker on Beacon Hill and other mayors across the state within their respective communities.

Earlier this morning, Henry and Jane Richard helped Mayor Walsh unveil a set of commemorative banners at the site of the second explosion on Boylston Street, where their eight-year-old brother Martin died two years ago. Another set of banners was hung at the site of the first explosion near Marathon Sports. Survivor Jeff Bauman, who lost both legs in the attacks, revisited the site this morning, sharing an embrace with Carlos Arredondo, the man who helped to save his life.

Last year, Boston marked the one-year anniversary of the bombings with a private tribute held inside the Hynes Convention Center. Attendance was restricted to survivors, first responders, families of the victims, city and state officials, and Vice President Joe Biden. The tribute concluded with a flag-raising ceremony and moment of silence near the finish line.

But this year, the anniversary is more outward-looking. After declaring April 15 “One Boston Day,” Mayor Walsh has called upon people throughout the city to share random acts of kindness, inspired by many bombing survivors’ wishes to spread the love and support they received from the community in the aftermath of the attacks.

“It’s a day for us to really, truly rally around the city of Boston and continue the great tradition of this city in the aftermath of the marathon bombing,” Mayor Walsh said in a video posted on the One Boston Day website, where people are encouraged to share their goodwill.

Organizations and businesses around the city have welcomed the new tradition with various initiatives. The Hyatt Regency at Downtown Crossing is collecting 502 pairs of shoes—one for each of their rooms—to donate to the St. Francis House homeless shelter. The Museum of Science is offering free entry to its Butterfly Garden, where visitors can reflect in peace. The Massachusetts chapter of the American Red Cross is holding a blood drive from 9 a.m. to 2 p.m. at the Sheraton. Legal Sea Foods is delivering lunch to the firehouse in Fenway. Boston Calling is donating a quarter of proceeds from all tickets purchased today to One Fund charities created in honor of the victims. From 10 a.m. to noon, with the help of volunteers, classic rock radio station 100.7 WZLX is cleaning up Filippello Park, located in the Watertown community where a shootout between law enforcement and the Tsarnaev brothers took place days after the marathon.

“One Boston Day” takes place five days before the 2015 Boston Marathon, and six days before the penalty phase is scheduled to begin in the trial of Dzhokhar Tsarnaev, whom last week was convicted on all 30 charges for his participation in the 2013 bombings. Yesterday, jurors were ordered by U.S. District Court Justice George O’Toole not to attend the marathon or any of the events marking the anniversary of the bombings as they prepare to deliberate whether to give Tsarnaev the death penalty or life in prison. 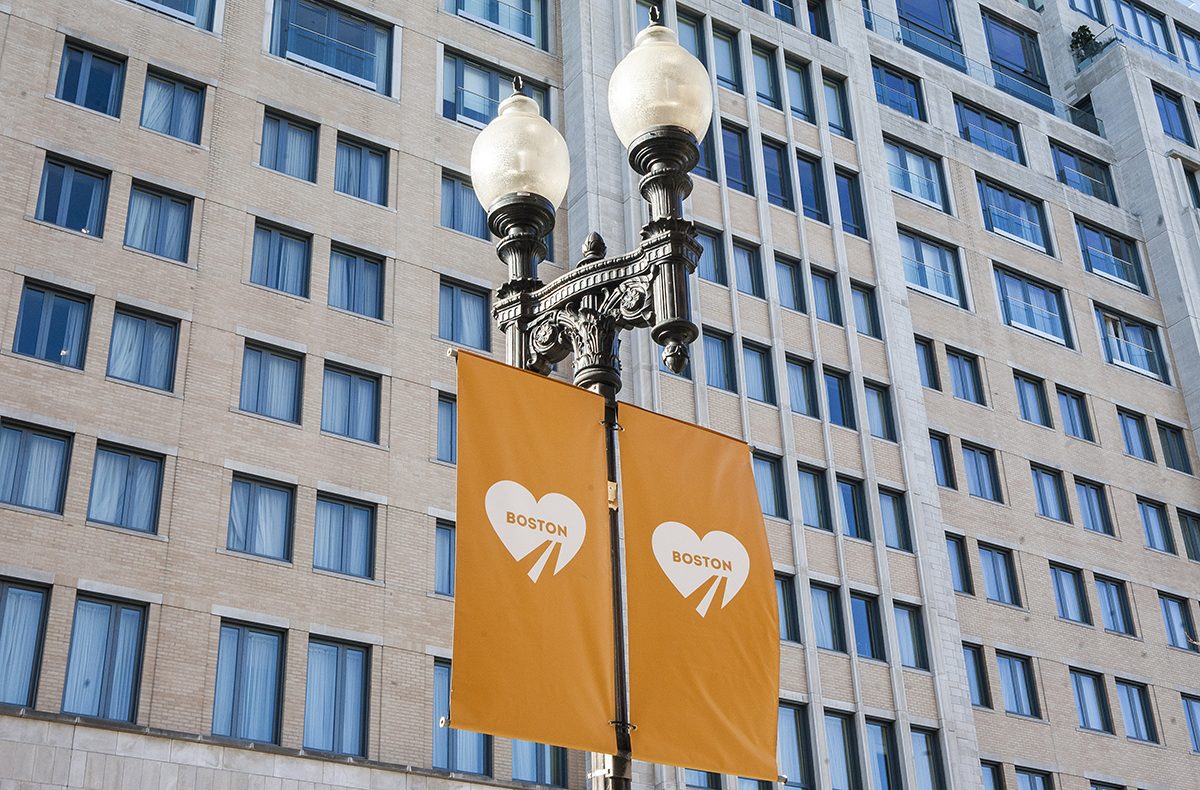 Commemorative banners were unveiled on Boylston Street Wednesday morning—one set at the first explosion site near the finish line and another at the second explosion site by the space formerly occupied by Forum.Photo by Olga Khvan 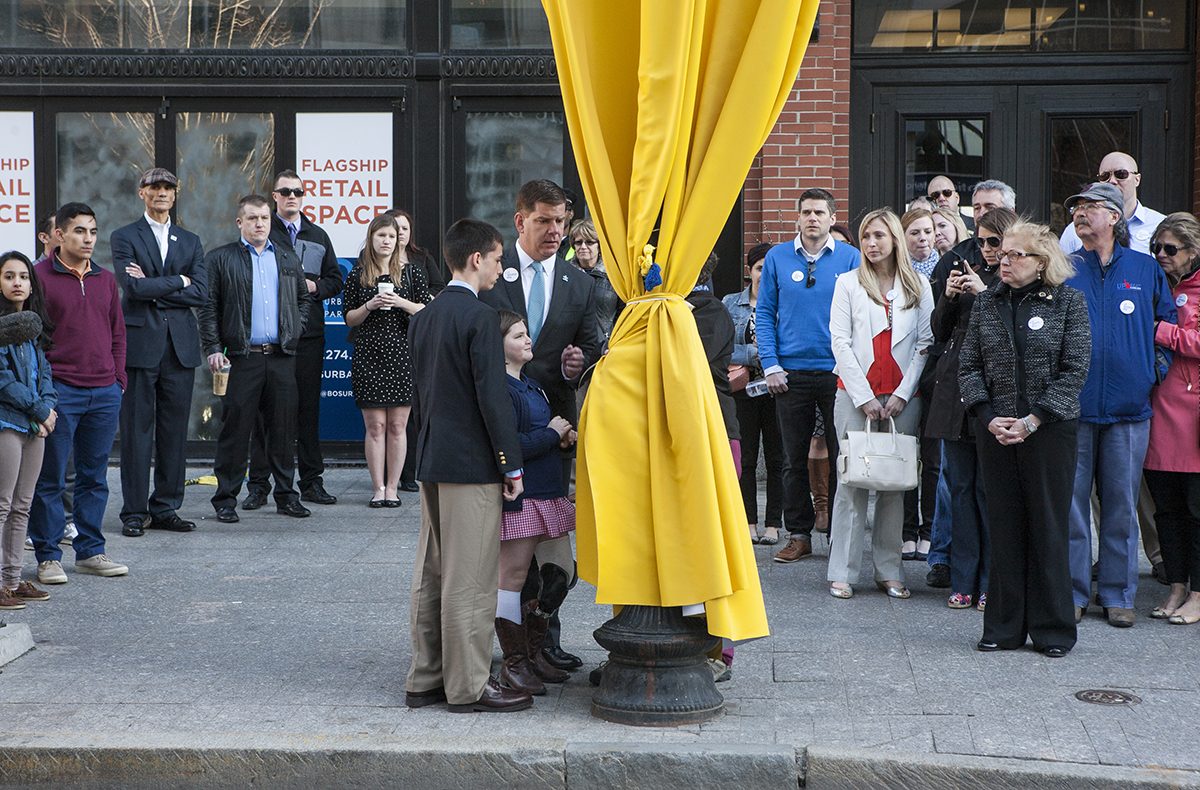 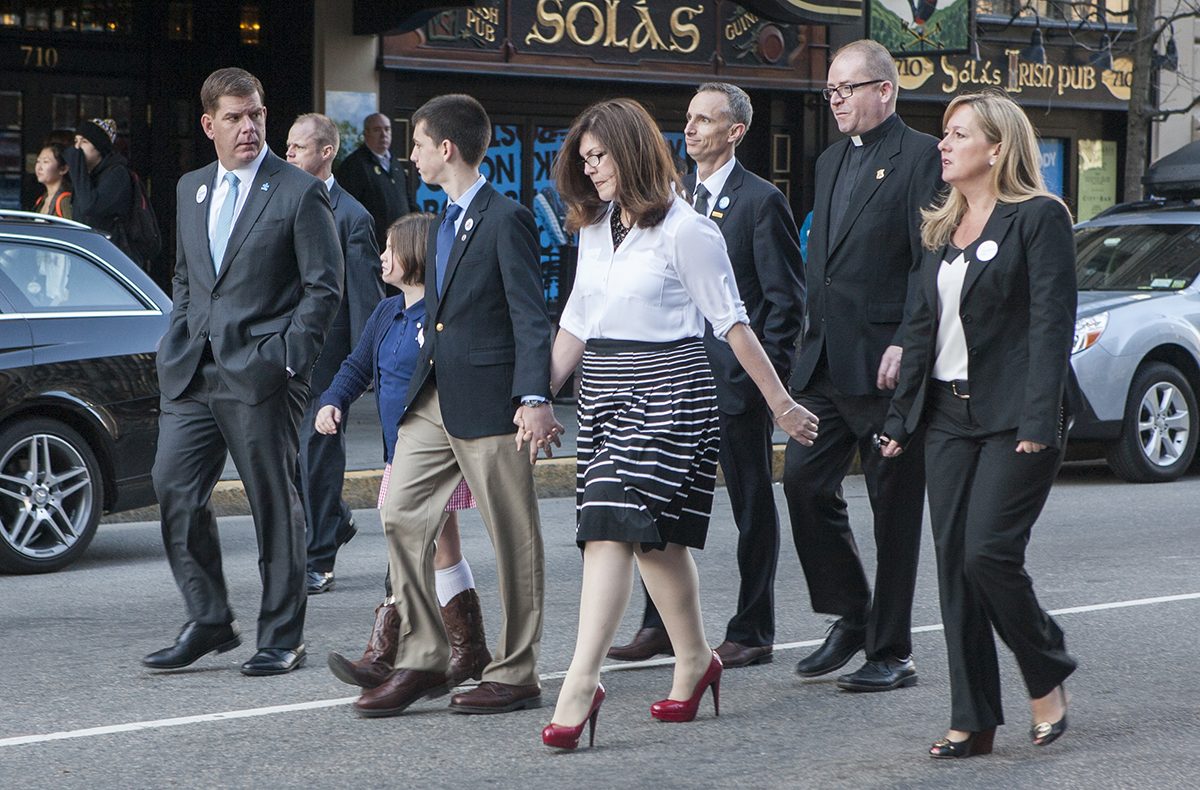 Henry and Jane revisited Boylston Street with their parents Bill and Denise.Photo by Olga Khvan 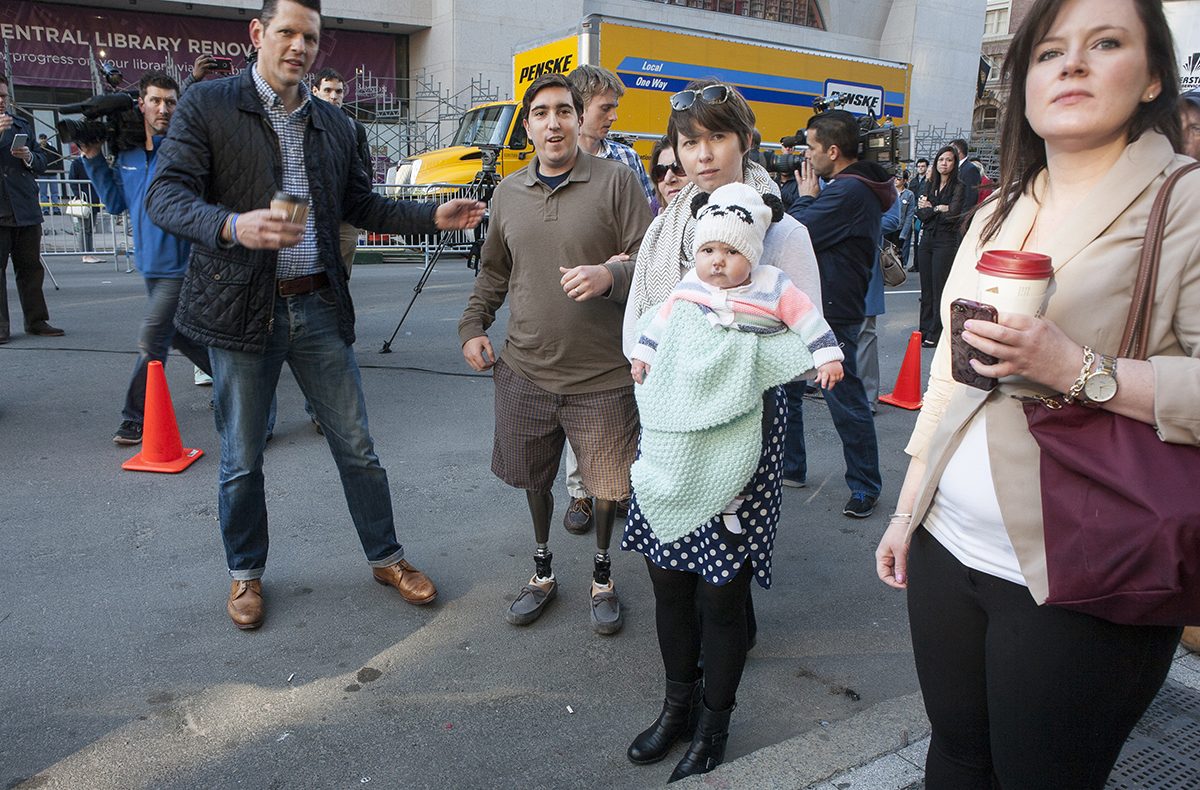 Survivor Jeff Bauman, who lost both legs in the attacks, came to Boylston Street Wednesday morning with fiancée Erin Hurley and their daughter Nora Gail.Photo by Olga Khvan 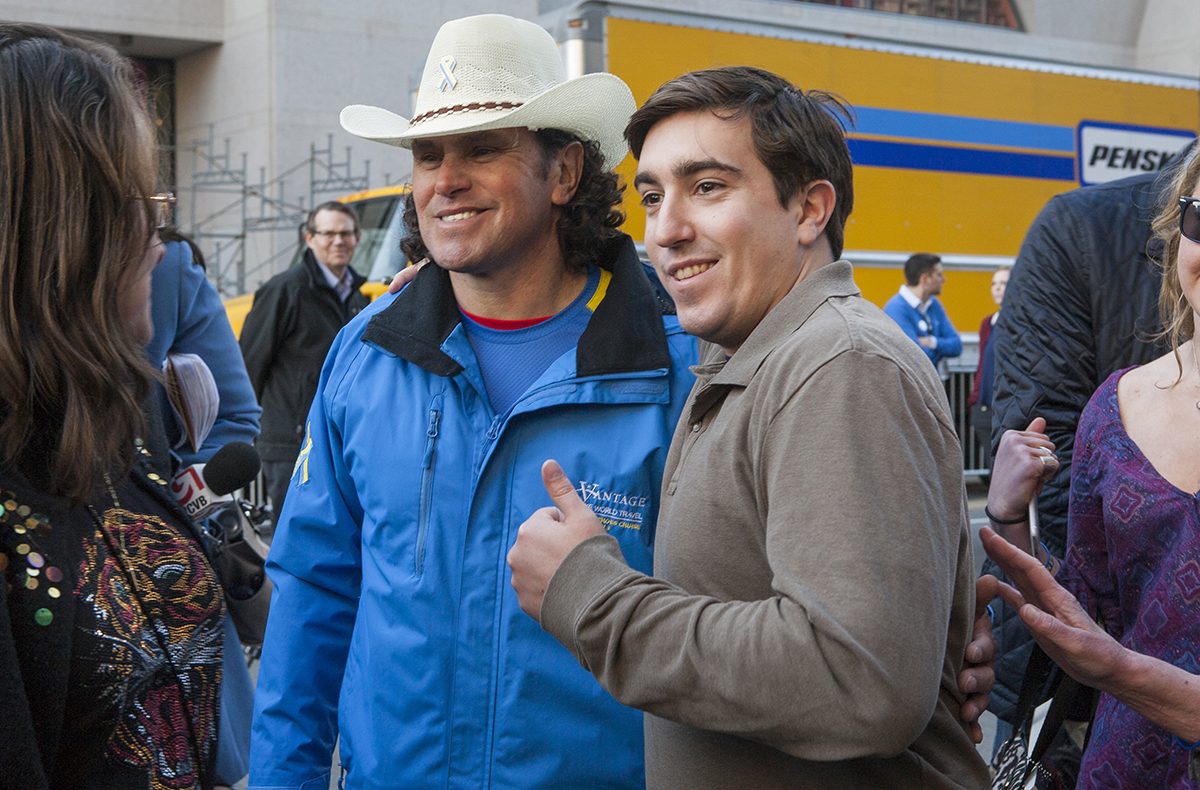 Jeff Bauman shared a moment with Carlos Arredondo, the man who helped to save his life two years ago.Photo by Olga Khvan 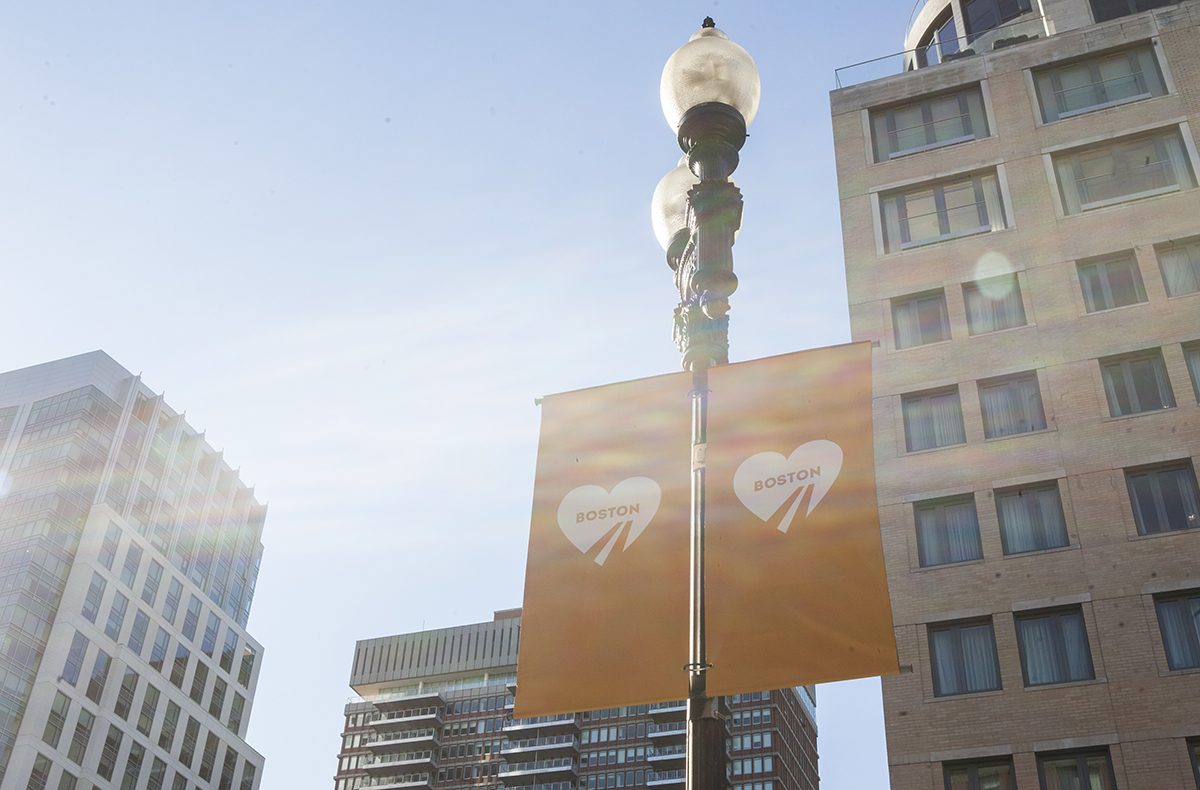 Mayor Walsh will lead a moment of silence at City Hall Plaza at 2:49 p.m. He encourages people to share random acts of kindness in honor of One Boston Day.Photo by Olga Khvan