Guy Who Took a Pic with Trump’s ‘Nuclear Football’ Keeper Is from Boston, Was in Ted

Richard DeAgazio had one hell of a night at Mar-a-Lago. 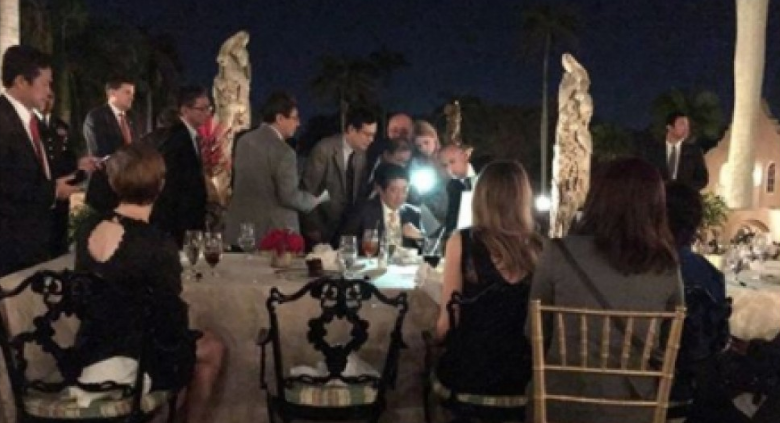 Richard DeAgazio had one hell of a night at Mar-a-Lago. The businessman, who had expected merely to enjoy a relaxing evening at the exclusive Trump-owned resort, instead ended up fueling a controversy that has national security observers reeling today.

In case you missed it, DeAgazio posted on Facebook a number of gleefully captured photos of President Trump, Japanese Prime Minister Shinzo Abe, and high-level White House aides, having dinner surrounded by the resort’s wealthy guests. In one, he poses for a picture with, and identifies, the man responsible for carrying the “nuclear football”—the mechanism by which a president can order a nuclear strike at a moment’s notice while mobile.  In others, he captures the moment that Trump and his team swarm around briefings following a missile test in North Korea—all while sitting steps away from resort patrons and staff, and pointing smartphone flashlights at the documents to see them better in the dark (for the record, White House spokesman Sean Spicer insists that “no classified materials” were discussed in the open at the club). Experts have said this is a clearly, almost comically, risky way to handle sensitive materials. And DeAgazio captured it all on camera for the world to consume. “HOLY MOLY!” he wrote. “[T]he center of the action!!!”

For the low-low price of $200,000 and no background check you too can live-stream a military crisis meeting. pic.twitter.com/vNd8Jo7Bq5

If his name or likeness is somehow familiar to you, it’s because DeAgazio is a son of Boston. Born in Waltham, his career in finance and marketing includes serving as the former head of Boston Capital Securities, Inc., according to a description of his (since-deleted) LinkedIn profile on the site Heavy.

He was also, implausibly, an extra in Ted. In his spare time, DeAgazio is an actor, and has more than a dozen film credits to his name, according to IMDB. He was also momentarily in The Fighter and Mystic River.

DeAgazio, surely, didn’t know the headache he was about to cause the new president, who he has praised in YouTube videos (which have also been scrubbed from his channel).

And yet, he managed to unintentionally twist the knife a bit more. In an interview he did with the Washington Post about the unusual turn of events today, DeAgazio had this to say: “He chooses to be out on the terrace, with the members,” he told the paper. “It just shows that he’s a man of the people.” As the Post’s David Fahrenthold points out, membership at Mar-a-Lago (now known as the “Winter White House”), starts at $200,000. Man of the people, indeed.

Note: This story has been updated to include comments from White Hose spokesman Sean Spicer.