Donald Trump and the Plight of L.L. Bean

A presidential tweet. Boycotts. Buyouts. 2017 is off to a rocky start for New England’s most iconic brand. Can new CEO Stephen Smith help his company get back on the right trail? 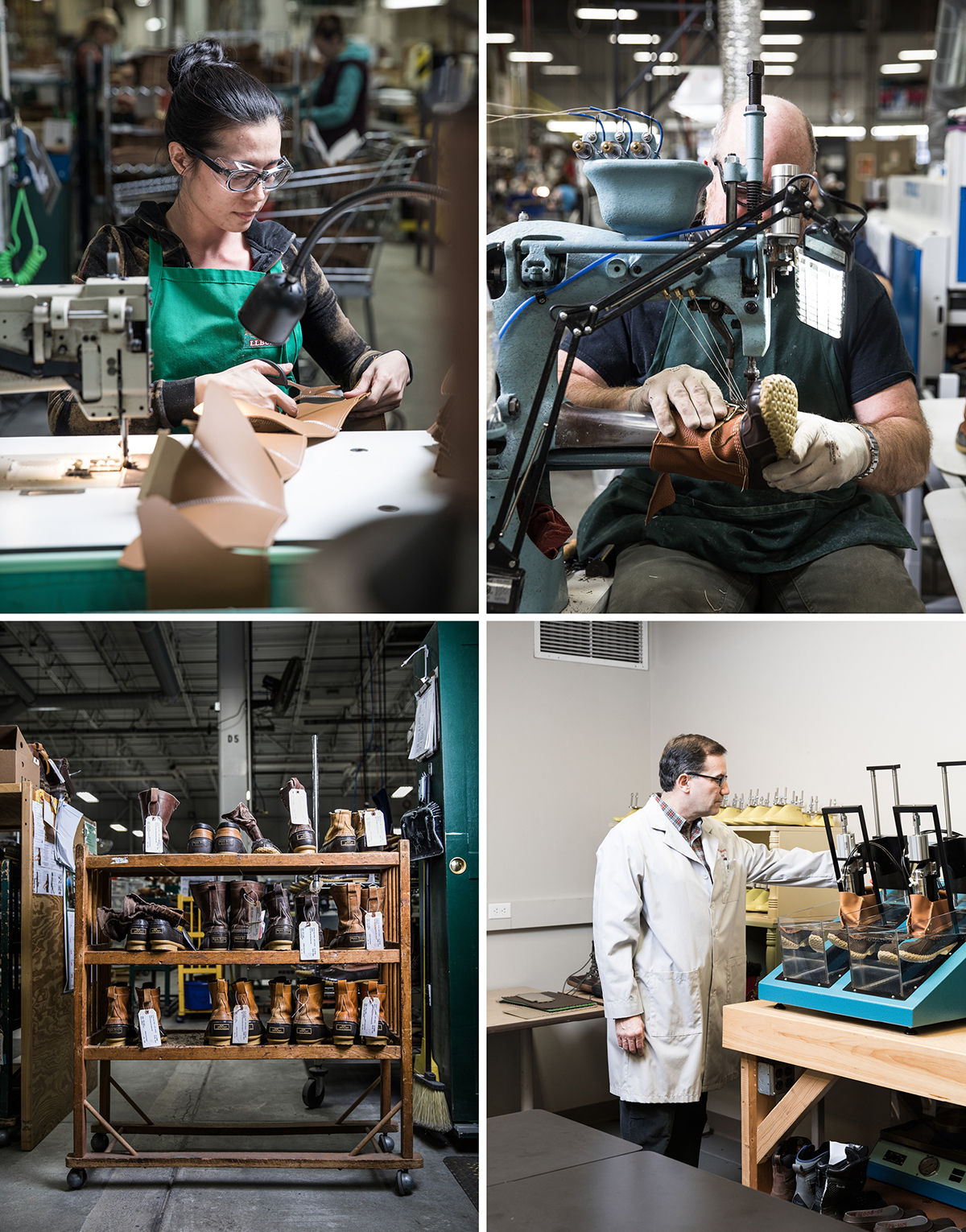 Employees handcraft and test L.L. Bean’s signature boots in Maine. The wait list has grown to more than 50,000 people in recent years. / Photographs by Greta Rybus

After more than 30 years at the helm, Gorman stepped down as CEO in 2001 and turned his corner office over to Chris McCormick, a Bean veteran who had spent nearly two decades with the company. To stop the bleeding, McCormick cut 15 percent of the workforce—roughly 1,000 jobs—on his way to trimming $40 million in overhead expenses. Unlike other apparel companies at the time, though, Bean never panicked or diluted its brand. “Look at Ralph Lauren,” says Matt Rubel, CEO of Varsity Brands. “They opened up so many outlet stores, and all they’re doing is chopping up fabric to make more polo shirts to sell at a discount. That’s not what L.L. Bean did.”

Instead, Bean survived and even thrived while others in the industry flailed and filed for bankruptcy. Gone were the years of 20 percent growth, but the company focused its marketing effort and aligned its online and catalog offerings. Then, in 2014, McCormick, who by that point had spent more than half his life at Bean, announced he would be stepping down in two years. The clock to find a suitable replacement began ticking.

Meanwhile, on the other side of the world, Smith was working for a Walmart subsidiary and raising a family. He didn’t know it yet, but a family crisis was about to change his and L.L. Bean’s fortunes forever.

The odds were stacked against Smith from the very beginning. L.L. Bean needed to finds its next great CEO, and the last thing company brass wanted was an outsider to run the show. Executive chairman Shawn Gorman says he and the Bean family had “hoped we would never be in a position where we wouldn’t have an internal candidate. But Steve just kept coming back.”

Fit, with blue eyes and neatly trimmed light-brown hair, Smith, in a pinch, could double as one of the company’s catalog models. He grew up in suburban New York and from a young age thought he was destined to become an architect. When it came time to commit to a five-year program, however, he got cold feet and opted for a liberal arts education at Dickinson College, in Pennsylvania, where he played Division III hoops, majored in art history, and minored in physics. After graduating, Smith had little interest in heading back to the classroom for an MBA or a JD. Instead, he says, “I just kind of wanted to get working and make some money.”

Smith’s first stop was J. Walter Thompson, the revered New York City ad agency, followed by a marketing gig with AT & T. A company man Monday through Friday, Smith spent weekends with his now-wife, Lynn, escaping Manhattan for the White Mountains of New Hampshire. After five years of city living, they moved to Maine in 1997 when Smith accepted a sales position at Resort Sports Network, a small-time cable outlet that broadcast snowboard competitions and mountain-bike races. “We went through the venture capital boom and raised loads of money and hired lots of people and fired lots of people,” Smith recalls. The job may not have been ideal, but life in Maine was “magical,” he says. “It’s summers and winters; it’s seafood and beef; it’s humility and confidence. It’s all these fascinating juxtapositions.”

For all of Maine’s glories, though, its job market has never been one of them. With a growing family, Smith wanted better job stability and took a position in the marketing department at Hannaford Supermarkets. He excelled, and before long was asked to spearhead projects for the grocery chain in Florida and Belgium. Smith’s experience abroad ultimately paved the way to a cushy position at Walmart International in Shenzhen, China, a densely packed city of more than 10 million people adjacent to Hong Kong. Smith delighted in watching his daughters grow up as global citizens, but there was a cost: the lingering fear that he might not get home fast enough in case of a family emergency.

It wasn’t unfounded. Smith’s father had struggled with heart disease and cancer for years, and in late April 2014 took a turn for the worse. Fearful he wouldn’t get the chance to say goodbye, Smith rushed back to his parents’ house in Amherst. After a marathon round of consultations with doctors and family, Smith’s father was moved into hospice care. Smith spent the following days at his father’s bedside, pouring out his heart and promising he’d be there to take care of his mother and sister. He wasn’t sure what that meant in practical terms, but the sentiment hung heavy in his heart.

A month later, at Smith’s father’s memorial service in June, more than 300 people packed into the First Congregational Church in Amherst to pay their respects. Somewhere in the day Smith found himself talking with Tara Knupp, a college friend who was working at L.L. Bean. Knupp handed Smith a folded-up piece of paper, looked him in the eye, and said, “It’s time for you to come home.” Smith unfolded it to find an internal memo announcing that L.L. Bean’s CEO, Chris McCormick, was stepping down and that the company was looking for his replacement.

Convinced it was a sign, Smith worked every connection he could find to get on the company’s radar. The vetting process took months, and Smith flew from Shanghai to Portland for a week at a time to meet with various members of the Bean family. Finally, in August 2015, Smith faced his final test: 80-year-old Leon Gorman, the man who had turned his grandfather’s $2 million company into a billion-dollar brand.

Smith sat in a beige boardroom across from Gorman. Though Gorman’s body was frail from cancer, he still possessed the piercing intellect that had guided the company for so many years. “I was scared,” Smith admits. They talked about retailers Smith admired and their mutual love of the White Mountains. Gorman appeared less interested in Smith’s ability to run a company and more concerned about making sure he wouldn’t jeopardize its values for a quick buck. At the end of the interview, as the two men were walking toward the door, Gorman stumbled and fell backward. Smith stepped forward, caught the elderly executive under his armpits, and sat him down in a nearby chair before heading home. That day was the last time they’d see each other: On September 3, after having endorsed Smith as the “real deal,” Gorman passed away. “It just feels fateful,” Smith says. “This whole process started with the death of my dad. And there I am in front of a 70-plus-year-old man [who had a long-term illness]. It was heavy, and it was heavy all the way through.”

Smith arrived for his first day of work at L.L. Bean on January 4, 2016, with a clear vision for the company. As far as he was concerned, there was no shortage of room for the brand to grow. “Everybody knows L.L. Bean in America,” he says. “But there are a lot of people we just aren’t relevant to.” The company, he points out, has only 41 stores in the United States, the vast majority of which are confined to the Northeast. Moreover, Smith says, Bean’s customer base is slim—just 2 percent of American consumers. “We need new customers,” he says bluntly.

To boost profits, Smith has a plan. Right now, Bean’s product line consists of more than 150,000 different items, from lobster-shaped dog toys to shotguns to leather couches. A quarter of these products are produced in the U.S. and four of them—the Bean Boot, the dog beds, the belts, and the Boat & Tote—are made at the company’s factories in Maine; most of the others come from overseas. The logistics of maintaining such a vast inventory are dizzying and expensive, so he wants to whittle the Bean product line down to the essentials. “We have too much stuff,” Smith says. “If we narrowed it down, we’d have a lower cost of goods, and then we’d be able to make a little bit more money and put that money back into growth.”

It turns out the company also has too many employees. In hopes of cutting 10 percent of his workforce, Smith is offering buyouts to longtime workers with the aim of eliminating about 900 jobs. The belt-tightening also includes a freeze on the company’s pension plan. Then there is the matter of the Bean Boot, the brand’s most iconic and sought-after item. Bean’s boot makers have struggled to keep up with demand, and waiting lists have grown in recent years to more than 50,000 people. It’s no surprise, perhaps, that this level of devotion and desire has created a thriving market for look-alikes. Brands such as Steve Madden, Sorel, Sperry, and other competitors have all tried to get a piece of the action. “Right now, there are about 40 copies of the Bean Boot, and I find it incredibly frustrating and irritating,” Smith says, insisting that there are components of the boot that are proprietary. While the company has not taken any legal action as of yet, Smith doesn’t rule it out. In the meantime, he’s closely watching Boston-based Converse, which has gone to war against other shoemakers in federal court in hopes of protecting the look and design of its Chuck Taylor sneaker. For now, at least, Smith is confident that the Bean Boot can hold its own against impersonators. “Everyone else can copy it,” he says with a grin, “but none of them are made in Maine.”