What Are These Turkeys Seen Circling a Dead Cat in Randolph Up To?

Don't freak out. A turkey expert says he can explain. 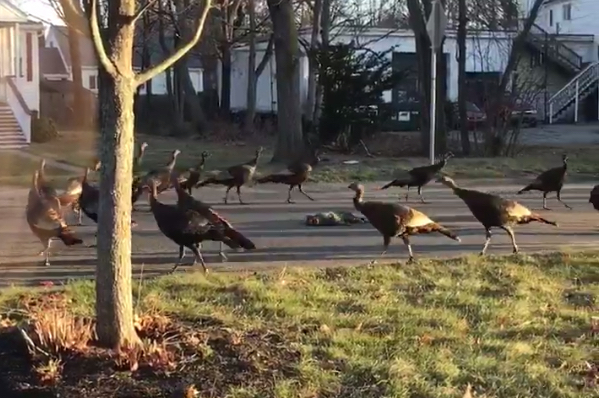 Um, what exactly is happening here?

A Boston man freaked out thousands of people online today after he shared footage on Twitter of a flock of turkeys circling a dead cat in the middle of the road in Randolph.

Needless to say, people had lots of questions. Within a few hours the hair-raising video had been shared more than 6,000 times, spawning speculation about some kind of turkey seance to revive the poor feline.

“A cat was killed in the middle of the street,” he wrote in another tweet, “and a group of 30 wild turkeys were circling it…not to kill it, but like a ritual lol.”

But fear not, folks. We called David Scarpitti, Massachusetts’ foremost turkey expert, to sort things out. The turkeys’ behavior is “unusual” and “really quite amazing,” he says. But he thinks he can explain it.

Turkeys, he says, are naturally fearful of cats, which can be a threat to younger, smaller birds. So it’s likely that, when they came across a dead one in the road, they were very curious to see what was going on, and whether it was alive.

At the same time, turkeys tend to follow a leader or two as they roam through suburban yards in search of food (they have a diet mostly of nuts, grains, and berries—no cats). So if one leader took it upon itself to march around the corpse and inspect it, it makes sense that the others would follow its lead, while keeping a safe distance from the fallen feline. Hence, a near perfect circle.

That said, Scarpitti says he has never seen footage like this in his more than 15 years as a wildlife biologist. He showed it to some of his colleagues at the Massachusetts Division of Fisheries & Wildlife, he says, and they’ve never seen anything like it either.

“It’s not something that’s really ever been documented until today,” he says.

And he also wants to make it clear that there is nothing supernatural about what we all just saw. “I would not go to that end of the extreme.”