In the Red Sox We Trust?

The Sox will probably break your heart, but there are still plenty of reasons to believe. 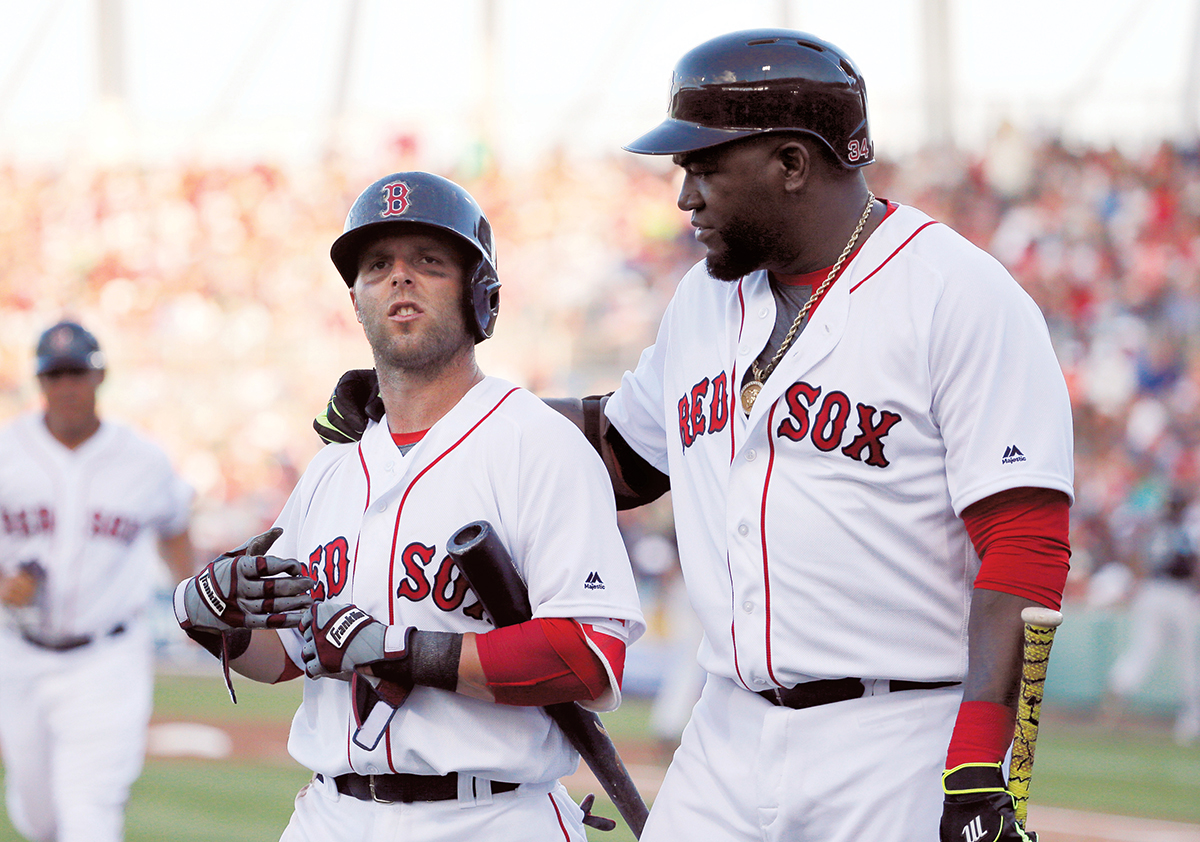 After years under the wing of veterans such as David Ortiz, Dustin Pedroia is ready to lead the team. / Photograph by Tony Gutierrez/AP Images

For the past 15 years, you’ve known the face of the Red Sox as if it were your own: the furrowed brow of a pensive Theo Epstein; the bespectacled baldness of a self-deprecating Terry Francona; the infectious, illuminating smile of a jubilant David Ortiz, all fused into an organization that brought you unprecedented success, stunning failure, joy, anger, frustration, and fulfillment.

You knew those Red Sox, connected with them, wanted to strangle them at times and kiss them at others. Most of all, incredibly, you grew to depend on them, to trust them. Now it’s the dawn of a new season, and the Sox have undergone a lot more than cosmetic surgery—the team has had significant changes to its DNA. Sure, the club still has recognizable and ever-reliable second baseman Dustin Pedroia. But the truth is that you really don’t know all that much about the rest of these guys, from the relatively new president of baseball operations (the perpetually buttoned-down Dave Dombrowski) to the new pitching ace (the seemingly volatile Chris Sale) to the mild-mannered trio of shortstop Xander Bogaerts and outfielders Mookie Betts and Jackie Bradley Jr.—whose individual leadership skills are still under development. “David Ortiz was so unique because he was the consistent thread throughout [our] championships,” says Sam Kennedy, the Red Sox president, who now occupies Larry Lucchino’s old job. “I’m not sure who’s going to emerge in 2017 and beyond…but I do think our fans are connecting, have connected, and will connect to our younger and some of these newer players.”

“If we have success,” he quickly added.

For a century, the one thing you could count on—with three clearly notable exceptions—was that the Red Sox would break your heart if you let them. So given all the new faces and the unfamiliarity with this year’s organization, it makes sense to ask yourself a simple question: Should I trust these Red Sox?

Dustin Pedroia represents the last of the golden age of Red Sox baseball. Drafted during the historic championship season of 2004, he ultimately became a full-time starter before the magical 2007 season, in which he won a World Series plus Rookie of the Year honors. In 2008, he took home the American League Most Valuable Player Award and nearly made it to the World Series again. Much of Pedroia’s success, of course, came on the back of good team chemistry—that elusive and inexact science of young players and veterans coming together. “My first couple of years,” Pedroia tells me, “I came up with Jacoby Ellsbury, Jonathan Papelbon, Jon Lester, all those guys. We were lucky.” Pedroia also had the chance to learn from longtime pros such as Ortiz, Jason Varitek, and Mike Lowell. “I think I was the only rookie position player in 2007,” he recalls. “We only sprinkled in young guys here and there.”

In retrospect, this was the peak of the Red Sox’s mini dynasty—a period during which Boston’s place in the postseason was essentially a foregone conclusion. For many wonderful years, the question wasn’t whether the Red Sox would play in October. It was: “How deep will they go?”

But Pedroia has been around long enough to know that’s not always the case. Sure, there were the championships, but the Red Sox suffered a stunning collapse in 2011, and finished last in 2012, 2014, and 2015 before making the playoffs again in 2016. Pedroia also jousted with egomaniacal manager Bobby Valentine in 2012, played great in 2013 and 2016, and got hurt and was sidelined for much of 2015. As much as anyone, he has seen the many sides of the Red Sox—the bad and the good—and all that comes with playing in a market where the relationship between the team and fans can sometimes feel like a marriage. He has seen the team win, then get torn down and reconstructed.

“It’s a crazy environment,” says Pedroia, now 33 and the oldest player on the Sox. “Even if you win, there’s always something someone can find in a player or the team: They don’t have this, they don’t have that. Yeah, you have a parade, and then a week later they start talking about the next year. You kind of have to put the blinders on and just play.”

Now, Pedroia knows, it’s his turn to be the clubhouse leader, so he’s taking on the role of patient teacher and motivator—keeping expectations high yet in check. “Recently,” he tells me, “we kind of [played Bogaerts, Betts, and Bradley] and a lot of young guys at the same time. That’s kind of asking a lot for those guys to go to a World Series and an American League Championship right out of the gate.” It took a while for the 2007 World Series team to come together, and today’s group, as Pedroia says, will also need “a long time to develop.” And while that might not sound encouraging or seem like much of a reason to trust the Sox this coming season, it helps knowing a familiar face and proven winner is still leading the team on the field.

While most every fan knows deep down that the Sox’s 2013 World Series win was a fluke pulled off by a team of misfits, there’s reason to believe they can do it again. The current roster is young, dynamic, and should remain together for at least three years, so long as the club can hold onto its core. Heading into the season, Kennedy also sees “a renewal of optimism,” which is no small thing. Compared with just three seasons ago, ticket sales are up and the organization is teeming with new personnel and talent.

Still, you’d be wise to question them, individually and collectively. I know I do. The 60-year-old Dombrowski, for instance, while accomplished in his nearly 30 years as a general manager and team builder, has won just a single World Series, with the Florida Marlins in 1997. He’s notorious as someone who will mortgage the long-term future of a ball club for instant success—a reputation bolstered by the off-season blockbuster trade that brought Sale to the Sox. (Last year, based on several assessments of all 30 major league player development operations, Dombrowski traded away five of the team’s top 10 prospects.) Before coming to Boston, he did essentially the same thing in Detroit, where the Tigers flirted with a championship but ultimately failed. Today, as a result, the Tigers have one of the worst minor league systems in professional baseball.

As for the young, new core of Red Sox players, while remarkably talented, their inaugural trip into the postseason last fall resulted in a decisive thumping. Betts, the most gifted of the Killer Bs—Betts, Bogaerts, and Bradley—often looked like he was trying too hard and twisted himself into a mental pretzel, going just 2-for-10 in the opening-round failure against the Cleveland Indians. Bogaerts downright nose-dived and batted just .235 during the final third of the season, including the postseason, and it became clear that Bradley at this stage in his career might be more like J. D. Drew and less like Johnny Damon. In all, during the playoffs last year, Boston’s young guns racked up twice as many strikeouts (12) as hits (6)—hardly a recipe for success. In the end, of course, what separated Ortiz’s teams from other Red Sox teams was consistent winning. “Our business is baseball,” Kennedy says, “and we need to field a competitive team. If we are competitive, I think the fan base will respond.”

One of the joys of baseball is its unpredictable, unscripted nature, so those of us who are brave enough to put our hearts out there will endure another season hoping for a payoff. But the fact that one old-timer thinks we should pay attention this season is a good enough start for me. Leading the talented core of young players is “my job now,” Pedroia says. “It’s to say, ‘Hey, we have to buy into this together. You have to buy into what we’re trying to do as a team to win.’ And if you do that, with their ability, the sky’s the limit, man.”