The Bursting of the Middlebury Bubble

When a controversial conservative speaker came to campus, violence erupted. Is Middlebury’s faculty to blame? By Samuel J. Abrams 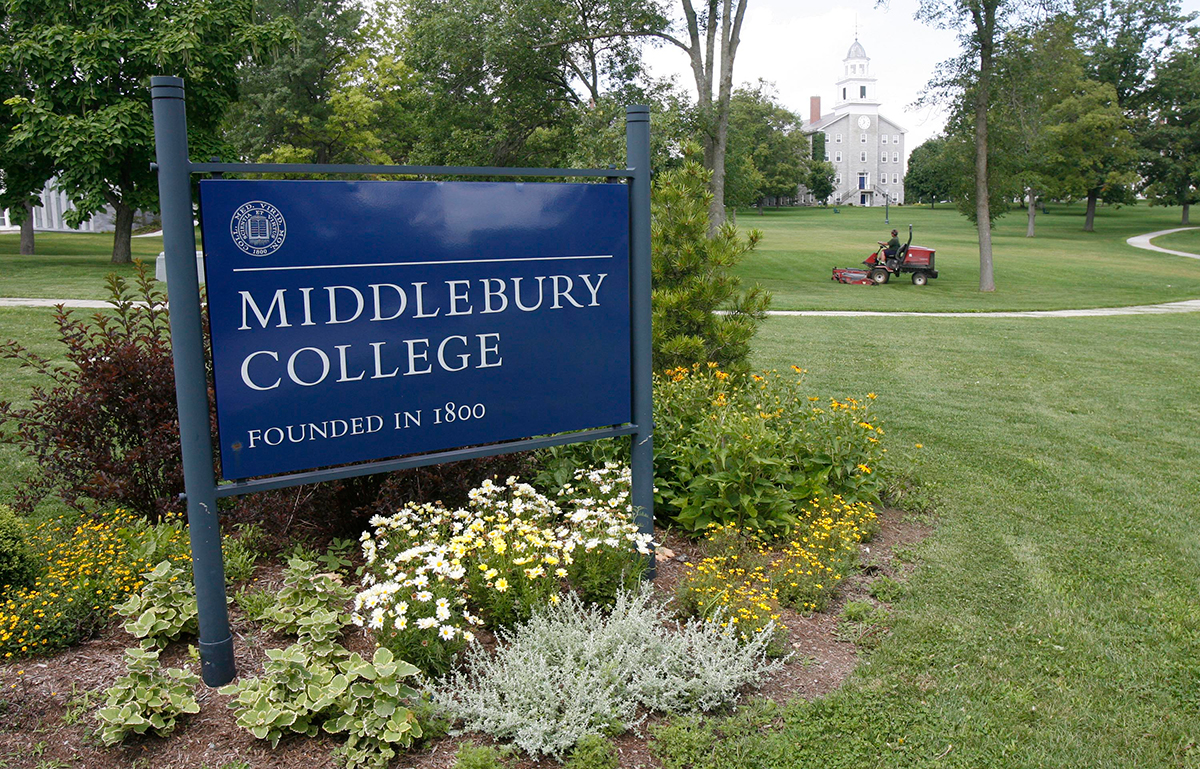 Charles Murray, a fellow at the conservative American Enterprise Institute, is not liked by many in higher education. So it wasn’t surprising to learn that his appearance at Middlebury College last week was met by protests. But the fact that it devolved to physical violence and the silencing of ideas is shocking, and it stands in direct opposition to the very mission of a school that promotes “rigorous analysis and independent thought.”

While Murray may be unpopular, it is hard to ignore his substantial impact on the public discourse in American academic, political, and policy circles. From his controversial work such as The Bell Curve, co-authored with Harvard professor Richard J. Herrnstein, to his more recent book, Coming Apart: The State of White America, 1960-2010, Murray’s ideas have been used to frame many tough conversations on class, race, and questions of inequality. In my own teaching on social change and elections at Sarah Lawrence College, I regularly assign Coming Apart because the work explores why white America has become fractured and divided by education and class. The book has stimulated some of the best classroom discussions that I’ve had during a term.

Murray’s work is often criticized, but it has not been met with universal scorn. Coming Apart has been positively covered in a wide variety of sources that are liberal leaning, including the Atlantic, NPR, and the New York Times. PBS NewsHour, a traditionally liberal program, even featured an online interactive quiz that allowed respondents to see if they lived in a “political bubble” based on the concepts in the book.

That is why what happened to Murray at Middlebury last week is so alarming. At the invitation of a conservative student group, Murray arrived on campus to deliver a lecture and engage in a discussion with Allison Stanger, a liberal-leaning member of the school’s political science department. As expected, protesters arrived. They shouted and loudly chanted, “racist, sexist, anti-gay, Charles Murray, go away,” until school administrators were forced to move the event to an undisclosed location and broadcast it. After the presentation wrapped up, protesters on campus surrounded Murray and Stanger. Things turned physical: Someone grabbed Stanger’s hair as she was reportedly attempting to shield Murray from the mob and twisted her neck, which resulted in a trip to the hospital and a neck brace. 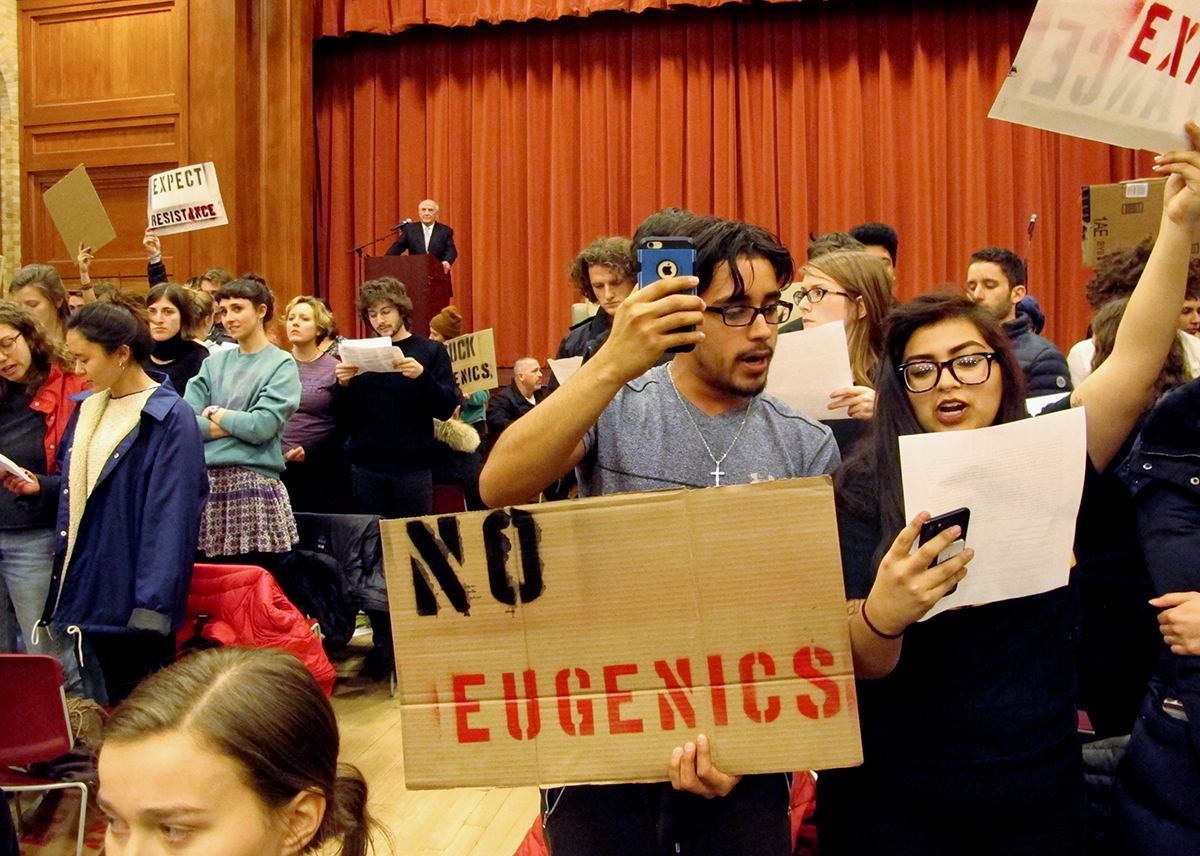 Middlebury College students turn their backs to author Charles Murray during his lecture in Middlebury, Vermont. The college says it has initiated an independent investigation into the protest in which the author of a book discussing racial differences in intelligence was shouted down during the guest lecture and a professor was injured. / Photo via AP 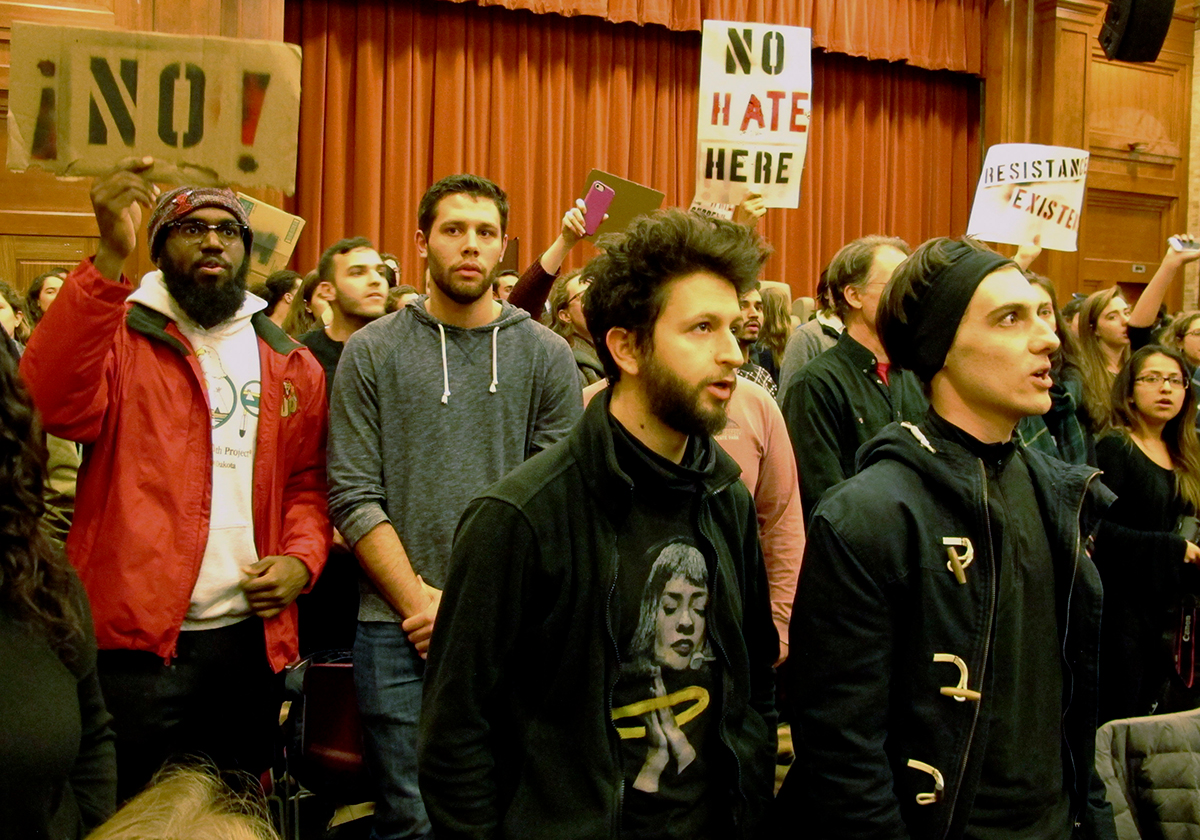 Hundreds of college students protested the lecture, forcing the college to move Murray’s talk to an undisclosed campus location from which it was live-streamed to the original venue but couldn’t be heard above protesters’ chants, feet stamping, and occasional smoke alarms. / Photo via AP

Awful as it may be, this is only the latest evidence of how far viewpoint diversity has declined on the campuses of our colleges and universities. Middlebury President Laurie L. Patton publicly stated that the college “failed to live up to our core values,” and pundits from across the ideological spectrum have weighed in on the mess. What has been missing from all of the reporting and editorials, though, is any meaningful discussion of the role Middlebury’s faculty played in this episode.

Faculty may be somewhat removed from students in large universities, but Middlebury is a small, selective liberal arts college where professors can influence the tone and climate of the campus. In this saga, it looks like faculty—campus leaders who should be the champions of free speech and open dialogue—were actually trying to shut down debate and dialogue with Murray.

While it is encouraging that Stanger agreed to engage with Murray, dozens of other Middlebury professors signed a letter to the schools’ president protesting Murray before he even arrived on campus. They wrote, “To introduce him—even to critique his arguments—only lends legitimacy to his ideas as worth engaging with.”

As an educator, this statement is disturbing. Whether you agree with them or not, many of Murray’s ideas merit airing and debating. It is worth noting that the letter itself was signed by professors in the social sciences and the humanities including gender, sexuality, and feminist studies, along with languages and film and media studies—all disciplines that tend to see activism and social change as part of their role within the academe.

Notably absent in the letter were signatures from faculty in the sciences and other similar disciplines, departments that tend be far less liberal and politically engaged on campuses. Rest assured that these faculties are present at Middlebury; the college has scores of departments and degree programs and has a notably vast interest in global issues, languages, and the environment.

I have spent years studying the ideological leanings of professors, and the events at Middlebury sent me digging through my data. While it is already well established that faculty are overwhelmingly liberal—and that the ideological disparity is especially acute in New England—it is worth noting here that professors from the departments that signed the letter tend to be more likely to try to ban or limit speech on campus if it’s perceived to be offensive in some way.

The Higher Education Research Institute has asked tens of thousands of professors nationwide if they agree or disagree with the notion that colleges should prohibit racist and sexist speech on campus. Nationally, 33 percent of faculty strongly agreed with the idea of speech prohibition, while 12 percent strongly disagreed. The remaining 55 percent of faculty were in the middle, where they somewhat agreed or somewhat disagreed with the idea.

When I looked at the numbers for the private liberal arts schools of New England, however, things were different. I drilled farther into the data, focusing specifically on the academic departments of professors who signed the letter to Middlebury’s president. While I do not have data on Middlebury faculty specifically, we know which departments the signatories are from. Looking at those departments—sociology, anthropology, film and media studies, among others—almost 50 percent of faculty members from them strongly agreed that colleges and universities should prohibit speech on campus if it can be considered racist or sexist.

That so many professors who embrace humanistic inquiry would support restrictions on speech is simply astonishing and does a disservice to the academe and to the very students that they are supposed to educate.

It is undeniable that the professors who signed the letter to the Middlebury president have influenced the discourse and thinking on campus. As a result, an unpopular, intellectually threatening, and erudite guest came to campus, and rather than engage with ideas, the campus moved to violence and intimidation.

Professors have every right to their political and ideological positions, but we as a society should worry when colleges and universities—the marketplaces of ideas—explicitly limit speech and prevent those who have different ideological leanings from discussing the merits and flaws of their views.

Small liberal arts colleges often exist in tiny bubbles of liberalism. In the case of Middlebury, the bubble has burst. My hope is that the school now looks to truly embrace viewpoint diversity and stops shutting out ideas that actually are in play in the real world.

Samuel J. Abrams is a professor of politics at Sarah Lawrence College and a research fellow at Stanford University’s Hoover Institution.