Is Jeff Sessions Coming for Legal Marijuana in Massachusetts, or Isn’t He?

It's still a mystery, and that's bad for everyone. 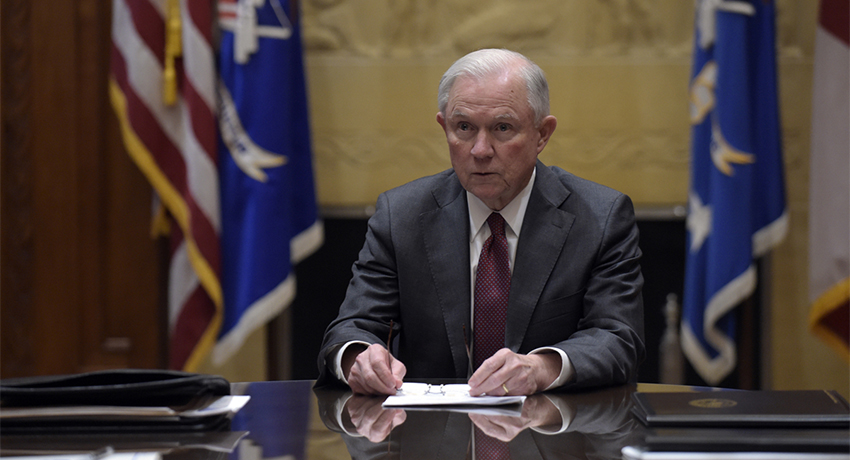 So, Jeff Sessions, are you coming for legal marijuana in Massachusetts or not?

Goldberg’s office is in charge of preparing for the new recreational marijuana law, which will allow retail stores to open here in mid-2018. For now, she is forming a Cannabis Control Commission, which will oversee regulations of the new market.

Effective implementation requires a significant investment in staff, equipment, and technology. As the state official charged with implementing the commonwealth’s new law, my staff and I are currently in the process of developing budgets, researching technology, and vetting commissioners.

As State Treasurer, I am keenly aware of my obligation to manage the state’s finances prudently. Fiscal responsibility requires predictability, and I want to ensure that we fully understand the DOJ’s intentions. In recent weeks, comments from the Trump Administration suggest that the DOJ may be considering a change. I would greatly appreciate your prompt response to clarity whether this is true — and if so, what changes we should prepare for before we commit significant public resources to implementing Massachusetts’ recreational marijuana laws.

Goldberg—who did not support the legalized recreational marijuana ballot campaign last year but has pledged to regulate sales of the drug in good faith—adds that she also needs to oversee the production of a database to track marijuana as it is grown, transported to retailers, and sold. And she needs to know whether the new administration will follow the lead of the prior one, which prioritized enforcement of the federal pot law only as a way to keep the drug away from gangs, from children, and from traveling across state lines. During the Obama years, the government mostly left marijuana shops in legal pot states alone. And Obama himself said late last year he believes we ought to treat pot “like cigarettes or alcohol.”

Elizabeth Warren and other senators also sent a letter to Sessions urging him not to deviate from Obama’s approach.

Politico, meanwhile, has reported that Sessions is reassuring Republicans in private that he isn’t planning a big enforcement campaign. So maybe there’s nothing to worry about. But an open question certainly isn’t helping anyone.

Even without confusion about mixed messages in Washington, the marijuana law is in many ways still up in the air. The state is in the midst of debates over whether and how the law should be changed. Sessions’ appointment to the Trump White House made that a lot more complicated for regulators, not to mention for marijuana investors and entrepreneurs.