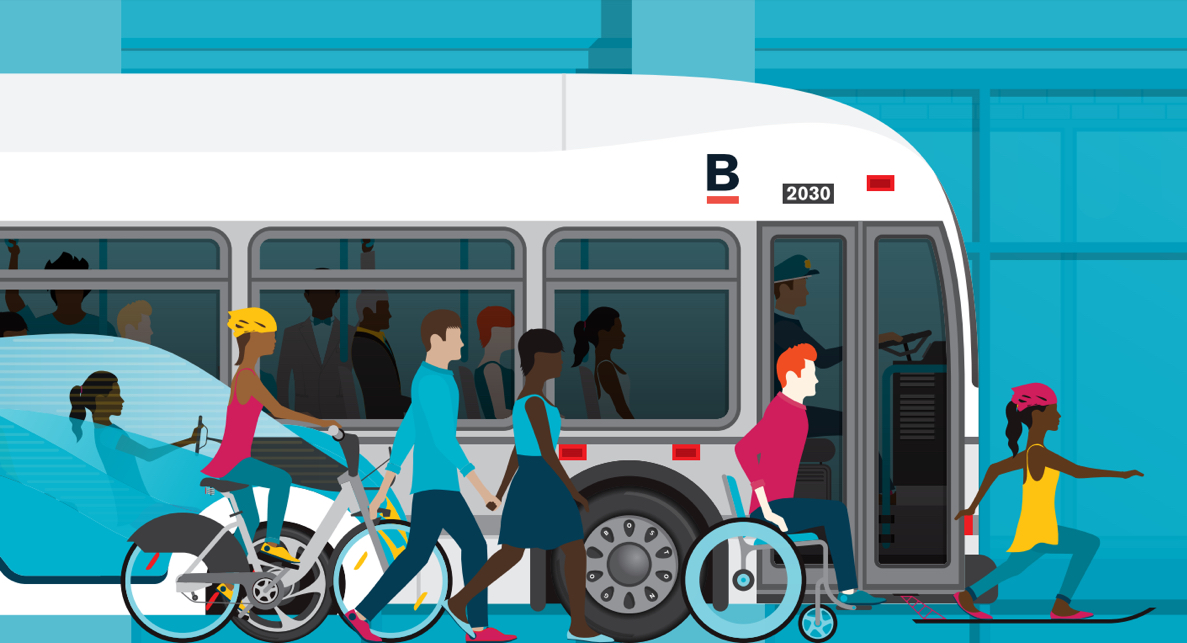 The plan—a dense 200-plus pages long—was unveiled and discussed at length earlier this week, and it’s now available for perusal on the city’s website.

The project sought input from thousands of Bostonians. According to the report, the city received more than 5,000 questions, more than 3,000 ideas, and nearly 4,000 responses to a survey. The final product includes descriptions of 58 projects that City Hall is prioritizing over the next decade-and-a-half or more, valued at nearly $5 billion, as well as nods to hot topics like late-night T service proposals, regulating driverless cars, and increasing the proliferation of Hubway bikes.

“Altogether, the initiatives in this plan will connect people to the region’s fastest growing job centers, tackle transportation inequality, prepare our transportation networks for climate change and increase economic mobility for the people of Boston” Boston Mayor Marty Walsh says in a statement.

The common theme in the plan is a more dramatic shift in Boston away from policies that prioritize cars, and toward ones that encourage people to take public transportation. As the population in Boston continues its upward climb, the city hopes to reduce the number of people who drive. That means billions in investments in trains, buses, boats, bikes, and other options.

Here are some things to know:

More MBTA extensions could be on the way 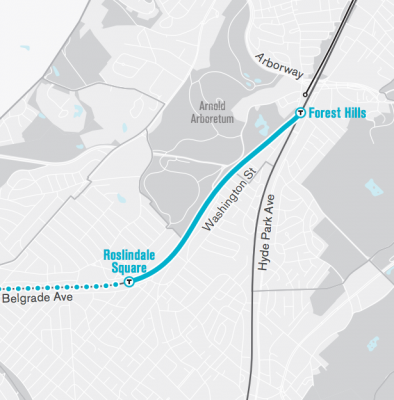 In addition to the proposed (and long-awaited) expansion of the Green Line, the plan calls suggest that in the next 5-15 years, the Orange Line could be extended to Roslindale Square, at a cost of $35 million or so. Either that, or commuter rail service could be extended into the neighborhood on the Needham line. “By providing this new service,” the report reads, “an entire neighborhood as well as one of Boston’s most successful Main Streets district will be connected by train to Forest Hills and beyond, enabling a single-seat subway-like ride where bus-to-train transfers were once needed.”

The report also includes a proposal to extend the Green Line past Heath Street to Hyde Square, but that’s an idea the city is considering 15 or more years from now. 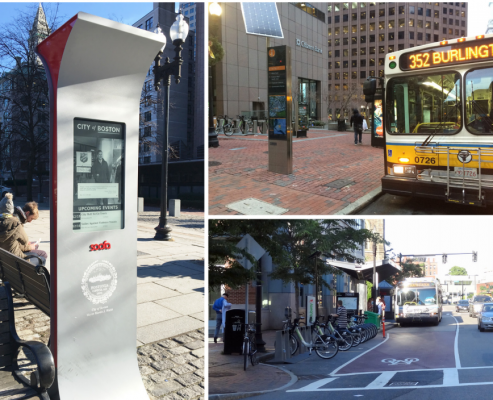 Watch out for “microHUB” waypoints throughout the city. These would be places where commutes could get on a bus, hail a cab or with a ride-sharing service, or hop on a bike. Separately, a bigger project is proposed to turn the busy Dudley Station into an indoor hub.

Centered around T-stations, bus network nodes, and local destinations such as community centers and smallbusiness districts, Mobility microHUBs are designed to provide and identify a range of connected travel choices. Using clearly-branded kiosks or nodes with real-time interactive information displays about transit schedules and shared vehicle availability, people can connect quickly between bus and train service, a Hubway station, secure bike parking, carshare vehicles, ridehailing pick-up spots, and electric vehicle charging stations at every microHUB. Coupled with free Wi-Fi and intuitive wayfinding, these nodes become reliable ways to start, continue, or complete a multimodal journey. Placemaking strategies including plazas or parklets, sidewalk amenities, information signs, shelters, and works of art at each of these hubs will make them places that are worth stopping in when you have the time or if you have to wait. 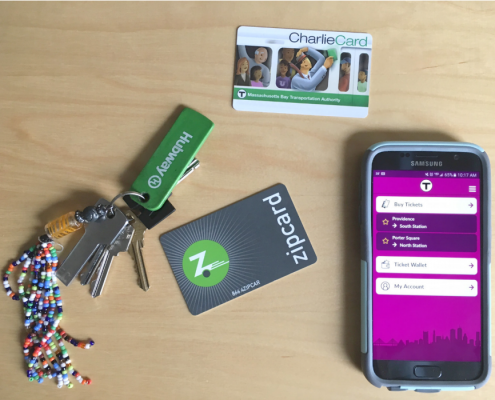 The plan envisions an all-purpose system that would keep commuters from having to schlep around a number of cards to use city transit services, be they Hubway bikes, Zip Cars or CharlieCards, which is being called a “Key to the City.”

Instead of paying for transportation services separately–with a Charlie Card, Commuter Rail ticket, bikeshare membership key, Zipcar membership card, ridehailing app, quarters or an app for parking meters, and an EZPass to pay tolls in your car–a Key to the City would enable transportation users in Boston to pay for a suite of transportation options through a single platform on either a chip card or with a mobile phone. While technology options are changing rapidly and many important legal agreements need to be worked out, these payment systems would enable easier transfers on multimodal trips and reward people who use a combination of transportation options with lower greenhouse gas emissions. It may also allow for price reductions for people traveling outside of commuter peaks to incentivize travelers who don’t contribute to congestion.

One More by Sea 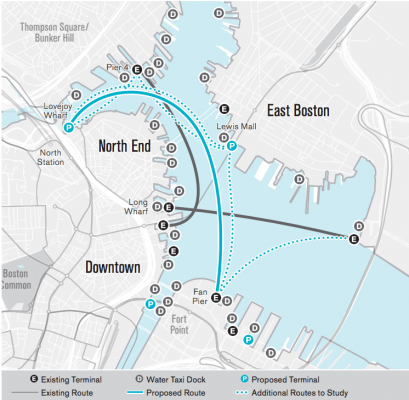 The city is taking a renewed look at the Inner Harbor and considering new ferry terminals and routes, including one that would connect North Station and the Seaport’s Fan Pier.

MassDOT, through guidance by the Water Transportation Advisory Council, is partnering with Boston Harbor Now to develop a water transportation feasibility and business plan to look at passenger demand, locations for ferry terminals, and service routes around Boston’s Inner Harbor. The Seaport Transportation Management Association and the Boston Convention and Exhibition Center (BCEC) are also partnering to develop a business plan for ferry service between Fan Pier in South Boston and Lovejoy Wharf at North Station to replace or augment land-based shuttle service. Recent and pending additions of water transportation terminals including at Fan Pier, Lovejoy Wharf, and Lewis Mall will offer direct connections between waterfront neighborhoods where direct access is limited or non-existent, including East Boston and North Station to the South Boston Waterfront. Other proposed connections include East Boston to Charlestown.

New Approaches in a Changing Climate 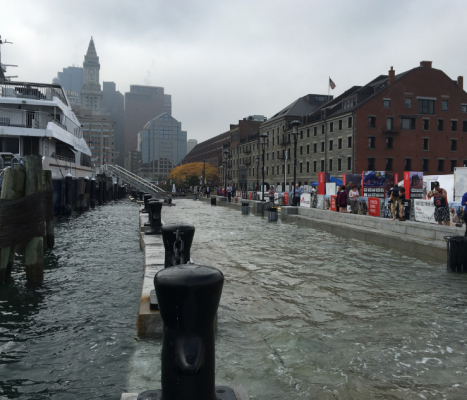 The plan does not fail to acknowledge the need to prepare for the effects of climate change, especially in the seaside neighborhoods of South and East Boston. Future projects will be analyzed to consider the impact of future sea level rise.

Current climate projections indicate that more roadways will become increasingly susceptible to flooding, particularly during extreme high tides and storm events. A range of innovative design solutions are needed, particularly for streets in East Boston and South Boston. In collaboration with the Environment Department and the Boston Water and Sewer Commission (BWSC), BTD will ensure that new roads are prepared to meet the unique demands of a changing planet. The King Tide in October 2016 demonstrated the impacts of future sea level rise. 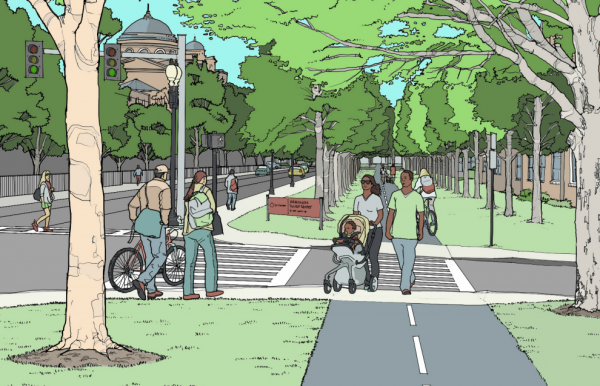 All around the city, new greenways are being considered. A plan called Boston Green Links aims “to connect people in every neighborhood to Boston’s greenway network by installing new paths, new bike facilities, and safer road crossings,” the report says, including in Roxbury, Lower Roxbury, the Fenway, the South End. The report highlights the extra-wide Columbia Road and space along the Fairmont line. 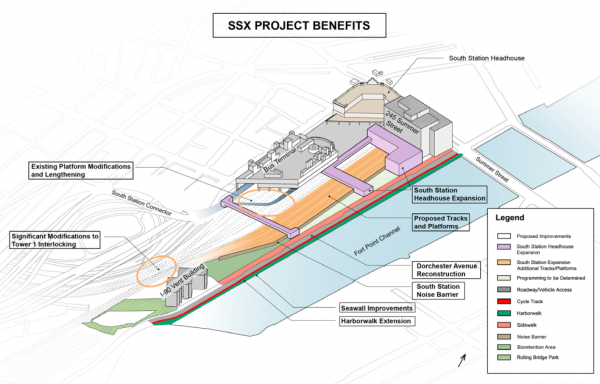 The plan highlights the proposed expansion of South Station, which both the Baker and Walsh administrations have identified as a priority project. It does not, however, mention the proposed North-South Rail Link, a long-discussed alternative project that would connect North and South Stations underground through the heart of the city. It is generally understood that only one of those two multi-billion-dollar projects are possible, not both. The state just announced it’s seeking bids for a $2 million study of the link, which has the support of activists including former Govs. Bill Weld and Mike Dukakis. But proponents can consider this another small blow to the prospects for the project.