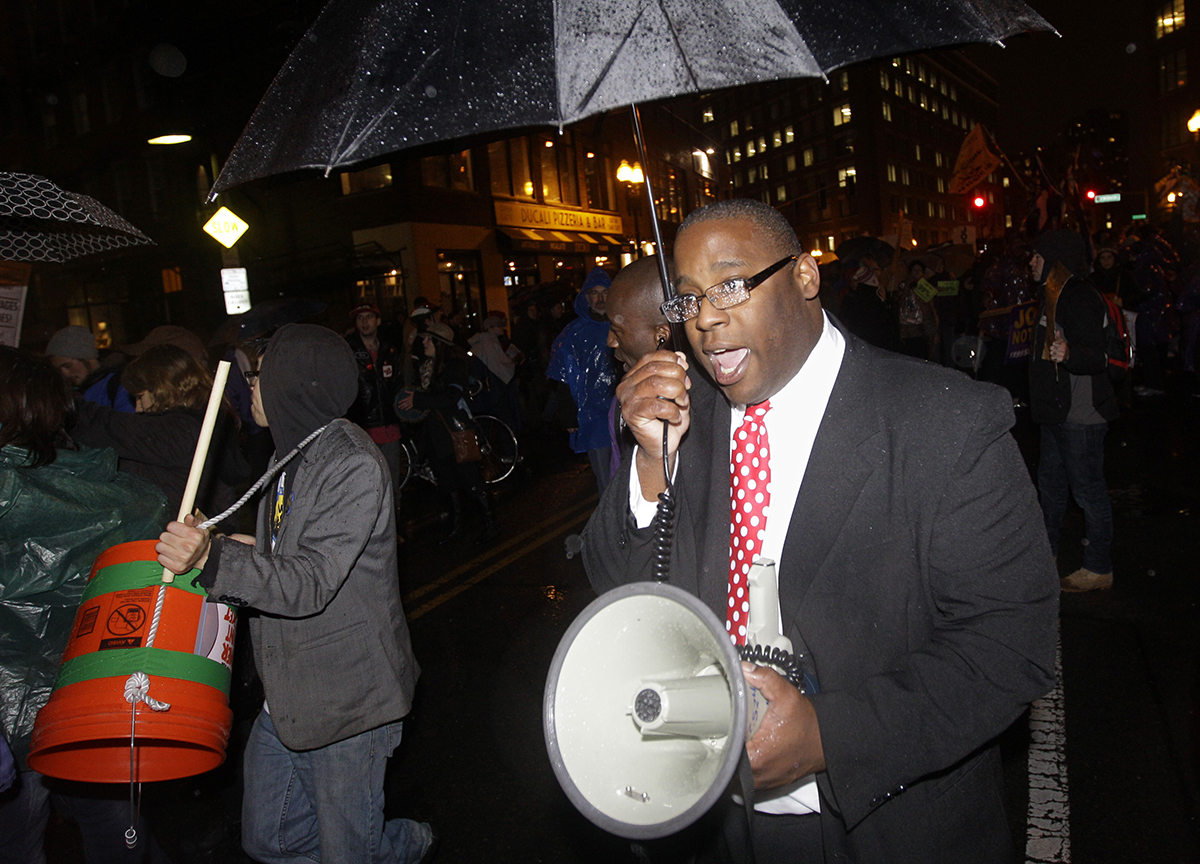 Boston City Councilor Tito Jackson leads Occupy Boston protesters in a chant during a march along Commercial Street to the Charlestown Bridge in Boston, November 17, 2011. / Photo via AP

Let’s talk a little bit about you. What is your deepest personal fear?

One of the things that we know about life is that we don’t get out of it alive. My deepest personal fear is that I won’t have done everything that I possibly could have done to make this world a better place for those people who come along after me. It’s literally why when thousands of young people walked out of school [to protest budget cuts], I was the only elected official who came to meet and greet them. Their voices, their vigor, and their purpose were seen in how they organized themselves, how they united, and how they stood together and stood up for each other. So my deepest fear and the thing that drives me every day is that I do not want to drop the baton of purpose that was handed to me.

What’s the best meal in the city?

I would say a movie and bowling with my nephews, and I win bowling.

You once had a claim on your campaign’s website that you like to dance and that you “can do a full split in the air—and touch my toes doing it.” With all due respect, really?

There is video footage all over YouTube. Don’t question my abilities, brother. I embrace my fun side, and politics shouldn’t be boring. It’s boring because people benefit from boring.

What do you mean by that?

One of my friends likes to say, “If you’re not at the table, then you’re on the menu.” And so it is absolutely critical that people in every neighborhood register to vote, take part in voting, and know what’s happening in their neighborhood and communities. The government should not happen to you, it should happen through you.

Are you a bachelor, or is there a special someone out there?

I have a special someone, and her name is Rosa Jackson. She’s 75 years old. She’s beautiful, and she is the apple of my eye, and she is my mom.

Do you worry about having some type of work/life balance, especially with the level of intensity that is going to come with running for mayor?

This is who I am. There are some people who have an on-and-off switch. Service is who I am, it’s what I do. It’s literally in my DNA. My father was a community activist, and fought to make sure that Boston residents, women, and people of color had jobs. That’s who chose me, and who adopted me. My mom had 52 foster children in addition to the four kids who they adopted, and my mom had a daycare for 25 years. So I’m not someone who has to compartmentalize their life. I love the opportunity to build fellowship and have fun with my community, and to fix the things that need to be fixed in my community.

The opioid epidemic is still a big problem in our communities. How would you take on this challenge?

One, I would deal with the Long Island bridge issues. What we know is that the city made an ill-advised emergency evacuation with no prior plan, and that people lost their lives. People who were in the midst of detox were put back in close proximity to drugs, and folks lost their lives. It is very, very troubling. It is critical that we house all of the people and ensure that they have quality, safe, and permanent housing through a Housing First model. We can’t have a serious conversation about opioid addiction if we can’t have a serious conversation about Boston-based beds for people who live in the city who are sick. Understanding that these are our brothers and sisters and cousins who have these issues, many of them seek to get better, but we do not currently have the capacity.

I object to Mayor Walsh’s policy, not his dress code. I am absolutely focused on the folks in the city whose clothes are all in a bag. They may not have those choices, so I think it is critical to keep our eye on the prize.

Donald Trump was an underdog and you’re an underdog. Any lessons from his campaign that you might apply to yours?

I would simply say that we live in a world where money doesn’t guarantee a win in an election.