Beware: A Ton of Snow Is Coming 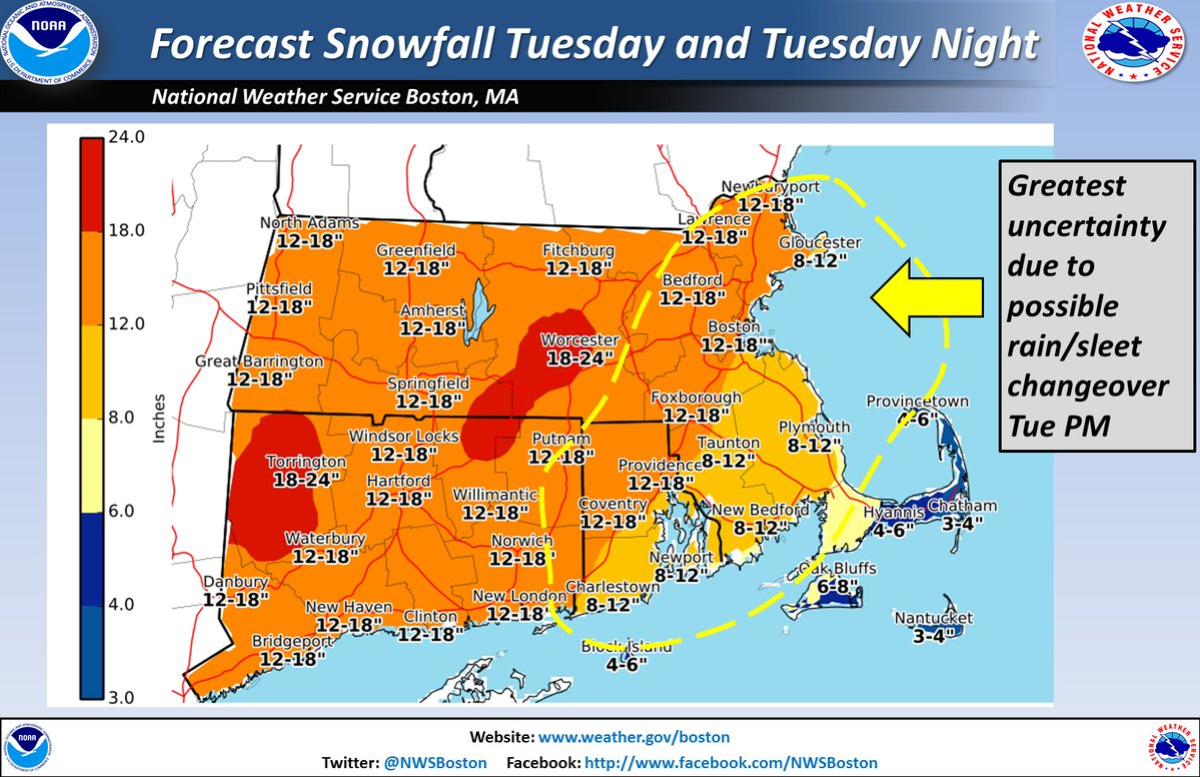 Earlier: Forecasters are urging Massachusetts to take heed: A ton of snow is coming our way tomorrow.

Boston is expected to see  as much as 12-18 inches of snow once the storm begins overnight, and it could fall at a rate as high as 2-4 inches per hour, according to the National Weather Service, which has issued a winter storm warning for Tuesday.

Blizzard conditions are possible, and a blizzard watch has been announced for Tuesday night into Tuesday afternoon. The storm—a wintry powerhouse right near the tail end of the season—could also bring winds gusting up to 55 miles per hour.

“This is really not gonna be a storm you want to mess with,” he says. “Unless you really have to go somewhere, the best advice is to stay off the road. Let the snowplows do their job—the more cars on the roads and highways, it’s just gonna make their jobs a lot harder.”

In a news conference Monday afternoon, Gov. Charlie Baker also urged people to stay off the road if they can and to be aware that the storm is fast-moving and that intense snow and sleet will arrive more quickly than usual.

Baker says he does not, however, expect to call for a travel ban. “This is gonna hit hard when it lands, and if people can work from home, that’s great,” he says. “But we don’t think it rises to the level of a travel ban.”

He hasn’t decided whether to tell state employees to stay home tomorrow.

Rain is expected south of Boston near the end of the storm, and it could make it up to the city. In that case snow totals would be a bit lower, possibly 8-10 inches, Dunham says. If the snow keeps up, though, we could be in record-setting territory. The most snow in a 24-hour period for March was 13.2 inches.

With heavy, wet snow and high winds on the way, the NWS is warning there could be power outages. Some coastal flooding is also possible, forecasters say.

The commuter rail will be running a severe weather schedule, so riders were encouraged to look on the T’s website for updates on delays and cancellations. The T’s other trains will be running a regular schedule. Expect delays on bus routes. Up to date info on MBTA service during the storm is available here.

Meanwhile, the French Toast Alert has reached the rare “severe” level, so make sure to stock up on the essentials.

Wintry weather will begin Tuesday morning, please use caution if you have to travel. pic.twitter.com/T3ekeqEPpx

Here are a few ways to prepare for Tuesday’s winter storm. pic.twitter.com/OArmJWYLPh