Why Cancer Is Killing Boston’s Firefighters

Turns out the deadliest part about being one of our city’s rescuers isn’t running into a burning building. 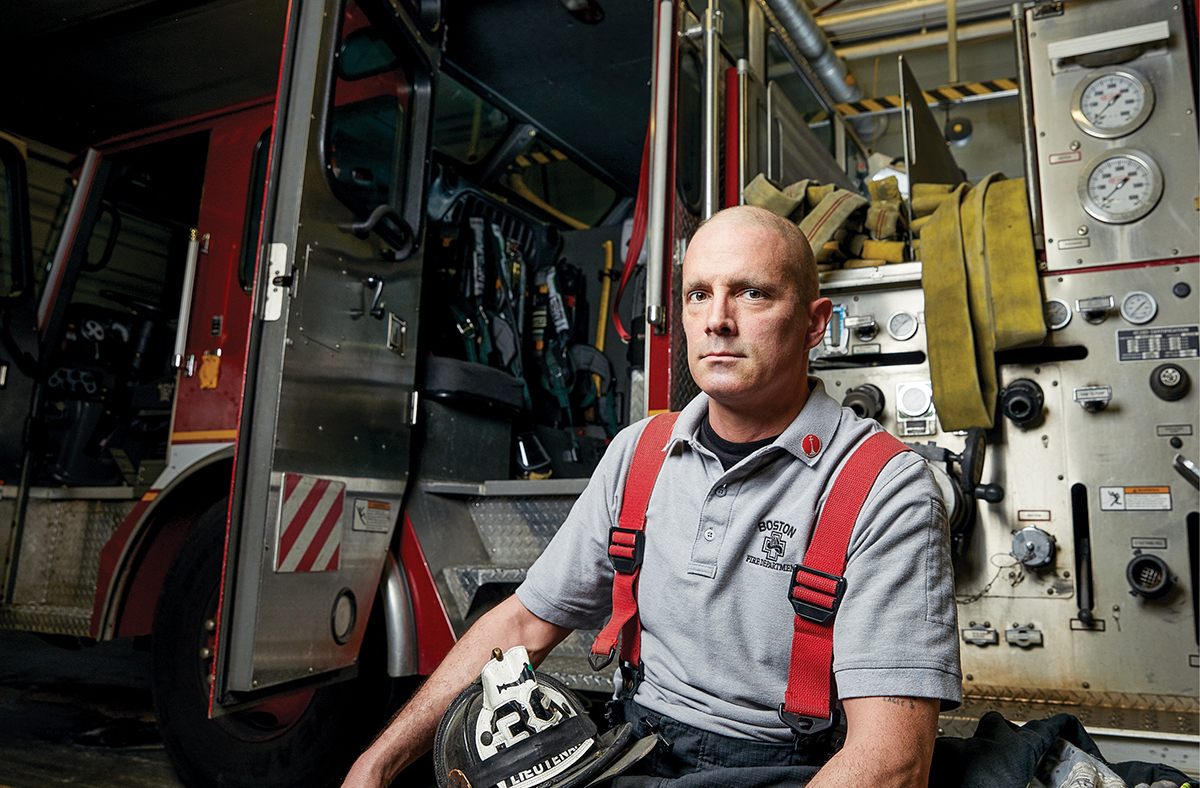 Firefighter Glenn Preston was devastated to find out he had developed cancer at 39. / Photograph by Ken Richardson

It was nearly 100 degrees outside when the emergency call reached Engine Company 39. A triple-decker in Savin Hill had erupted in flames, and a haze of thick black smoke was all but blanketing the sky. Firefighter Glenn Preston, a burly father of four who had only recently returned to action after breaking his neck on the job, was among the first to arrive. The blaze was larger than Preston had expected, and he knew the punishing summer heat would only make matters worse.

Saddled with 80 pounds of gear, Preston charged toward the building. He tried to haul himself over a fence into the yard, but his boot caught on the top, sending him to the ground like a sack of bricks. After the initial shock, Preston felt a rush of adrenaline lift him to his feet and he scrambled into the smoky abyss.

Visibility was awful as Preston felt his way through unfamiliar territory inch by inch. At first he didn’t even notice that he was gasping for air. “Who is breathing like that?” a fellow crew member barked over the radio. Preston snapped to: “It’s me, it’s me,” he yelled, pressing deeper into the smoke. “I’m fine.” After all, he thought to himself, these were precisely the moments he’d dreamed of as a boy growing up in Boston—plunging into hell in service to the nation’s oldest fire department.

Backup soon arrived, and the blaze withered. By no means was Preston’s tumble over the fence the worst he’d had, but something was wrong: He couldn’t stop wheezing. When he finally stepped out of the smoldering house and into the sunlight, he tried to inhale and catch his breath. “It felt like a gunshot,” he recalls. “There was a pain that brought me to my knees.” No stranger to the physical toll of the job or the macho culture inside the firehouse, Preston concealed his suffering. He told himself it was likely a cracked rib, just one of those pesky injuries that doctors can’t do much for other than write a painkiller prescription and tell you to get some rest.

After several days, though, Preston didn’t feel any better. He winced with each deep breath; sneezes brought him to the brink of tears. Finally—at the urging of his wife—he visited the hospital, where X-rays showed his ribs were unscathed. The pain, it turned out, was caused by something else: a malignant tumor the size of a small banana that stretched from his lung toward his heart. The news was devastating, but it wasn’t exactly a shock. “I’m a fireman,” Preston says matter-of-factly. “I had a feeling that it would happen. But not when I was 39.”

As it turns out, the greatest risk of being a firefighter in Boston isn’t burning to death or even breaking an ankle—it’s cancer. Preston wasn’t the first case, and he certainly won’t be the last.

Boston’s fire commissioner, Joseph Finn, has been a firefighter for 32 years, and at least once a month he learns that yet another member of his crew is sick with cancer. “It blows my mind,” he says, estimating he’s known nearly 200 colleagues who’ve died from the disease. Even scarier, Finn says, is that the number of notifications he receives is not shrinking. “These are guys who are 40 or 45 years old,” he says. “And some of them have been on the fire department for just 10 or 15 years.”

Understanding and quantifying why Boston’s bravest appear to be at such a high risk of cancer is no easy task. Unlike plastics workers or coal miners, who log consistent hours in the same environment five days a week, firefighters are not all exposed to equal amounts of smoke and flame. “There’s no standard amount of fire a firefighter fights,” explains Peter Chai, a medical toxicologist at Brigham and Women’s Hospital. Moreover, firefighters don’t all have just one type of cancer. Going back to the 1960s and 1970s, Chai says, they had high rates of mesothelioma, an aggressive form of cancer that’s associated with exposure to asbestos. Today, though, doctors are diagnosing firefighters with what Chai refers to as the “liquid cancers”—lymphoma, leukemia, and myeloma.

While the science may be “imperfect,” as Chai says, there’s little debate that firefighters are more likely than the average desk jockey to succumb to cancer. The National Institute for Occupational Safety and Health combed through the health records of 30,000 firefighters from several major cities and found that they were at notably higher risk for digestive, oral, respiratory, and urinary cancers. Meanwhile, an examination of Massachusetts’ health records from 1987 to 2013 found that firefighters were at a greater risk than non-firefighters for colon and brain cancers.

None of this, when you stop to think about it, seems counterintuitive. Firefighters earn their living by running into smoke-filled structures that everyone else runs away from, and the job is essentially a prolonged assault on the respiratory system. There are oxygen tanks and masks, of course, but as Finn knows firsthand, the cultural norms of Boston’s firehouses don’t always place a premium on personal safety. Firefighters, he says, are a tribe steeped in machismo; to its members, bravery means everything. As a younger man, Finn loved ripping off his mask and marching out of a fire, his face ashen, clothes reeking like a chimney. Among his generation, this grizzled look was dubbed a “Salty Jake” and was a source of immense pride—war paint from a hard day’s work under deadly conditions. “I consider myself a true firefighter,” Finn says, before hesitating. “But in hindsight, it was a stupid thing.”

Bravado, though, is only a small part of a much bigger problem. Today’s homes and offices are jam-packed with plastics, electronics, and furniture covered in flame-retardants. “When they combust,” Finn explains about household goods, “they are extremely toxic.” That means the smoke firefighters are exposed to is often loaded with a litany of septic chemicals—formaldehyde, vinyl chloride, chlorophenols, dioxins, trichloroethylene, ethylene oxide, polychlorinated biphenyls, methylene chloride, orthotoluidine, and arsenic, to name a few. Alone, any one of these may be harmful; mixed together they could make a potent cocktail of carcinogens with the capacity to do untold damage to the body’s organs, cells, and DNA.

It might seem odd that flame-retardants—ostensibly a firefighter’s best friend—would be a problem. They are, after all, designed to help slow the spread of fires or prevent them from starting in the first place. For decades, chemical mixtures were added to couches, mattresses, drapes, highchairs, cribs, televisions, computers, and countless other household items. But these chemical mixtures are not foolproof. They become ineffective at high temperatures, and when they go up in smoke they can take on the form of carcinogenic particles that are easy to inhale and capable of seeping through skin and into the bloodstream.

Throughout the years, many states, including Massachusetts, mandated flame-retardants in hopes of preventing destructive infernos. In 2012, however, a series of investigations revealed that the chemical industry misrepresented scientific research in an attempt to sway legislators by downplaying the known health risks that these chemicals pose to humans. The alarming revelations led to immediate legislative changes across the country. California rewrote its flammability standards so that foam cushions no longer needed to be laced with toxic and ineffective retardants. Other states soon followed. In no time, retailers such as Crate & Barrel, Ashley Furniture, and Williams-Sonoma took steps to eliminate the chemicals from their products.

Finally, in 2014, the Massachusetts Board of Fire Prevention Regulations and the Department of Fire Services revised their rules and rolled back flame-retardant requirements for public spaces, noting that less-flammable fabrics and sprinkler systems appeared to be equally as effective and less dangerous. But Boston decided to continue to allow the retardants. It was troubling, says Elizabeth Saunders, state director of the Massachusetts office of Clean Water Action, an environmental group that has worked on the issue, but also understandable: From the perspective of the fire department and city council, Boston had one of the lowest national rates of firefighters killed in action, so changing the fire code to eliminate flame-retardants didn’t seem to make sense.

The decision, however, turned Boston into one of the biggest markets in the country for flame-retardant-treated products, with devastating consequences. At the time, a member survey from the Business and Institutional Furniture Manufacturers Association showed that a staggering 40 percent of all furniture that was pretreated with flame-retardants ended up in our city. Not only were these products banned in nearly every other major metropolis, but they were feared by firefighters, who knew that potentially poisonous particles wafted off these things when alight.

Another problem is that these noxious particles tend to linger long after the flames are out. As Saunders notes, a firefighter doesn’t have to be in a raging hellfire to be exposed to the harmful effects. “When the fire has gone out and they’re still on site cleaning up without their masks on,” she says, “all those fumes are still around. The soot gets onto their uniforms and protective gear, and then it gets into the fire trucks and firehouse. The exposure just follows them.”

For the unfortunate ones, this endless cycle of exposure can lead to an early grave.