Throwback Thursday: When the Word “OK” Was Invented in Boston

It was first printed in the Boston Morning Post in 1839. 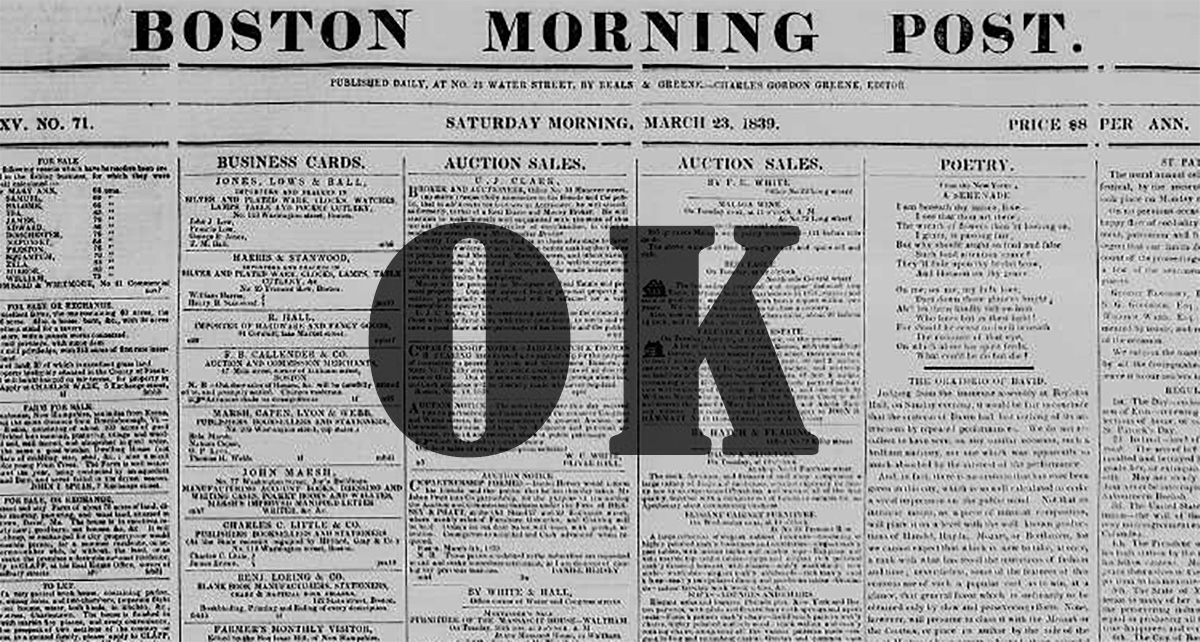 On this day in 1839, the word “OK” was introduced to the world by a Boston newspaper editor.

In the Saturday edition of the Boston Morning Post, editor Charles Gordon Greene attempted to make fun of the Providence Journal by inserting the abbreviation “o.k” at the end of a paragraph. Instead of eliciting a few chuckles, his joke entered American popular vocabulary.

What’s so funny about OK? It’s intended to be a shortening of “oll korrect,” a comical misspelling of the words “all correct.” Apparently, this counted as a jab at the Providence newspaper.

While it may not seem too humorous now, the joke was a knee-slapper at the time. “In an attempt at humor, young, educated elites deliberately misspelled words and abbreviated them for slang,” writes historian Christopher Klein, explaining 19th-century America was experiencing an abbreviation craze, much like today’s affinity for shortcuts like OMG and NBD.

The entire history of the word is laid out in a book called OK: The Improbable Story of America’s Greatest Word by Allan Metcalf. The short version is that OK appeared in the Boston Morning Post again a few days later, and then in other city papers around the country. But it wasn’t launched into the common lexicon until the presidential election of 1840.

When William Henry Harrison ran against Martin Van Buren, nicknames for both candidates became popular. One of Harrison’s was “Tippecanoe and Tyler Too,” and Van Buren was known as “Old Kinderhook,” since he hailed from Kinderhook, New York. His supporters began to form “OK Clubs,” and America reached peak OK.

“OK now could have a double meaning: Old Kinderhook was all correct,” writes Metcalf. While Old Kinderhook lost the race, OK persevered. In the years after, the word became the butt of political jokes, some of which poked fun at Andrew Jackson’s awful spelling. But eventually, people forgot where the abbreviation came from—at least until the 1960s, when a linguist traced its roots to Boston.