The Anti-Transgender “Free Speech Bus” Is in Boston

Mayor Walsh plans to raise the transgender flag at City Hall this afternoon. 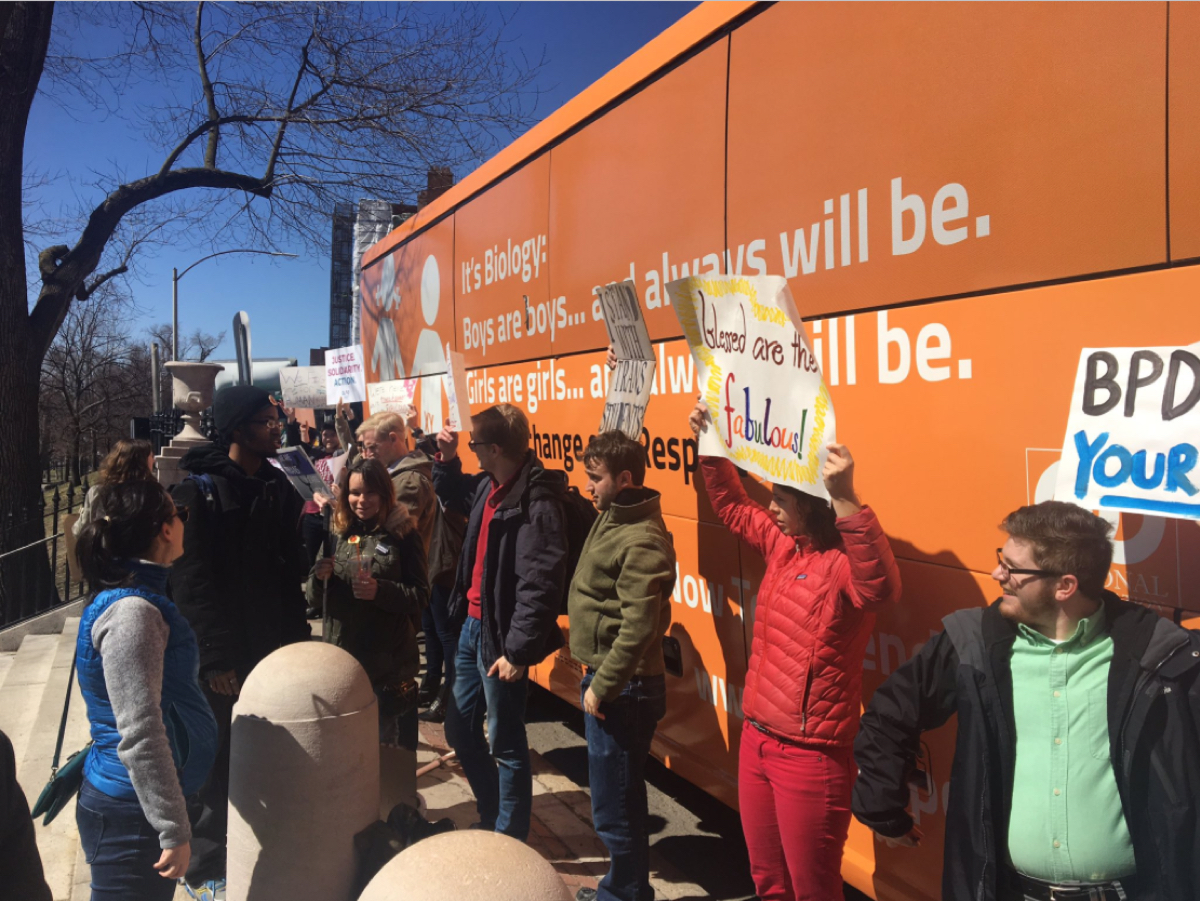 Update Thursday, March 30, 10:45 a.m.: The anti-transgender Free Speech Bus has arrived in Boston. It made an appearance this morning at City Hall at around 10:30 a.m., and despite having some trouble finding parking, it caught the attention of some photographers and other onlookers. Someone also threw a coffee at it.

Scene right now at the #FreeSpeechBuspic.twitter.com/33fAOuR2px

There was a brief exchange with a small group of protesters in Government Center, then bus moved on to the State House where it was met by demonstrators opposed to its message.

Boston Mayor Marty Walsh now says he plans to raise the transgender flag at City Hall this afternoon, with a ceremony slated for 12:30 p.m.

Boston stands for love & acceptance. At 12:30pm, please join me as I raise the transgender flag on City Hall Plaza in a show of solidarity.

The bus didn’t show up in Boston on Monday or Tuesday, and was also a no-show in New Haven, Connecticut over the weekend, but announced this week it was restarting its tour, beginning in Boston.

Earlier: Anti-transgender advocates have been driving a bright orange tour bus boasting the words “boys are boys” and “girls are girls” to cities around the Northeast, promoting the message that being transgender is not OK. Next week, they’re bringing it to Boston.

According to Gregory Mertz, the group’s U.S. Director, the Free Speech Bus team plans to have conversations with both those who oppose and support their message. They also hope to do some interviews with local media and meet with legislators to discuss the state’s transgender protections bill, which overwhelmingly passed at the State House and which Gov. Charlie Baker signed last year. Mertz said they would advocate for the bill’s repeal and, more broadly, challenge the transgender “agenda.”

They are prepared to meet some people who disagree.

“I expect there will be a large group of people [in Boston] who are upset and they’ll have an opinion and like in New York, we let them talk and hopefully they see where they’re coming from,” Mertz says. “We don’t have a hostile agenda, we just have a message and you know, there will be some supporters and we’ll see some people come out and support as well.”

Leaders of the Massachusetts Transgender Political Coalition (MTPC) say they plan to counter the message of the bus, because they believe its declarations about trans people can lead to violence.

“This idea that trans people are not human, that we are not real, that our experiences are based in deception, all of those kinds of narratives represented by this quote-unquote ‘Free Speech Bus’ unfortunately promotes an increase in discrimination and violence and harassment against LGBTQ people, and trans people in particular,” says Mason Dunn, the executive director of the MTPC. He notes that LGBTQ people are more likely than any other group to be victimized by hate crimes in Boston.

Dunn says the coalition is putting together an event in response to the bus’ arrival in Boston, but nothing has been solidified yet.

“What we don’t want to happen is we don’t want confrontation, we don’t want yelling and screaming. We basically want to make sure that our identities are out and visible and respected, which is everything that this bus actually stands against,” he says. “I know that their little tag line says, ‘respect all,’ but when you deny the experiences of trans people and you say that we don’t exist, that is hardly respectful.”

The Free Speech Bus stopped in New York City on March 22 to the 24—a visit timed to coincide with the 61 Commission on the Status of Women—where it was met with some opposition from LGBT activists and was vandalized. According to USA Today, the bus was spray painted with “Trans Liberation” and “Trans Rights.” The vandals also keyed the bus and damaged its windows. Mertz says the bus is being repaired and will be back on the road this weekend, hitting New Haven, Connecticut before heading to Boston. The group is currently in talks about adding security to their stops as well as opening communication with local police departments, Mertz says.

oops the @NOMupdate free speech bus got keyed tagged and smashed with a baseball bat pic.twitter.com/UbyUdVMU49

The bus has also been mocked online, and compared to the notorious traveling Nazi “Hate Bus” of the 1960s.

The Free Speech Bus is coming to town! pic.twitter.com/CJBH4Ss09Q

But local anti-transgender activists cheered the bus’s upcoming arrival, and its point of view. “I think the statement is a pretty straightforward one I think most people, even in Massachusetts, would agree with,” says Andrew Beckwith, president of the Massachusetts Family Institute. Beckwith’s group has been vocal in opposing the state’s new transgender rights protections, which, among other things, let people use bathrooms based on their gender identity. MFI is part of Keep MA Safe, a movement supporting a question on the ballot in 2018 to repeal the bill. He and his group have not yet decided if they will go see the bus. But, he says, “they certainly have a right to promote that message.”