Thomas Hodgson called for the arrest of sanctuary city leaders. 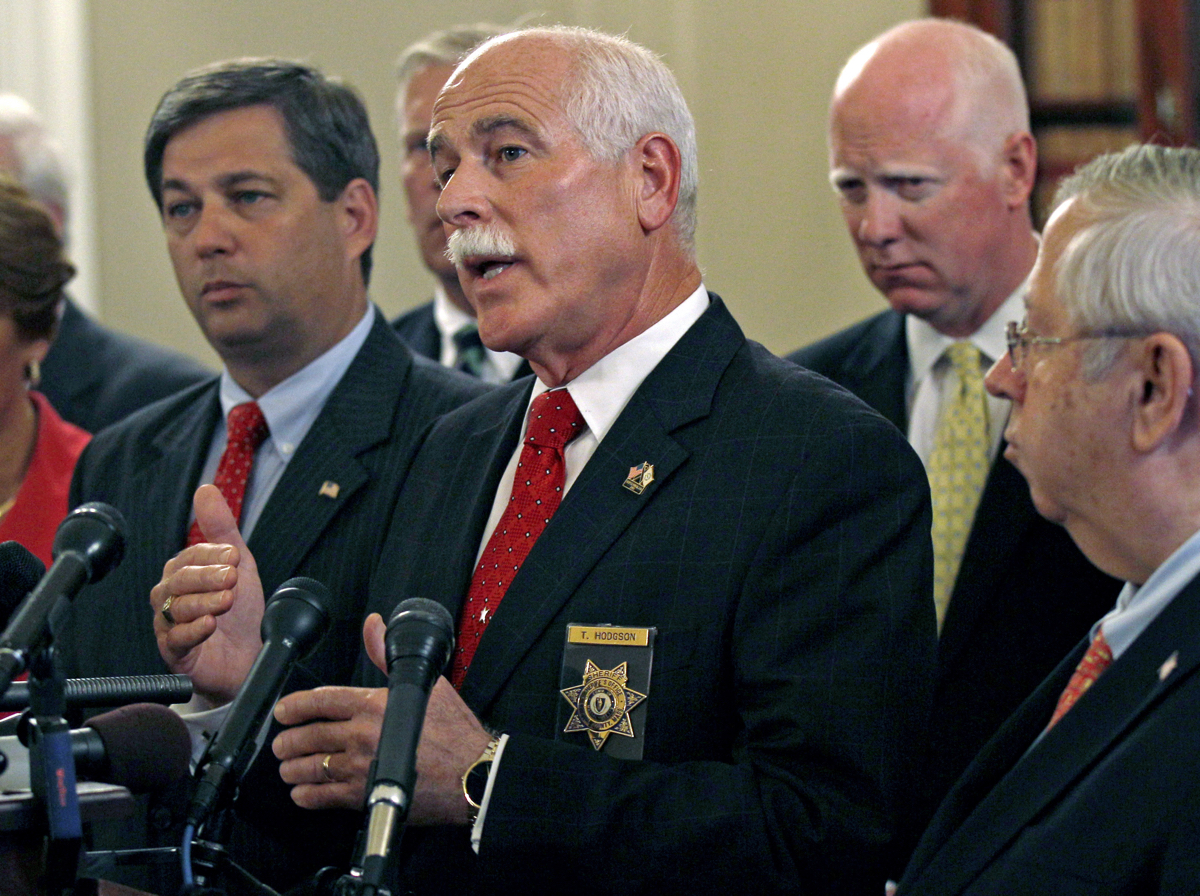 At a hearing in Washington today, Hodgson declared that “federal arrest warrants should be issued for” leaders of so-called sanctuary cities, like Boston and Somerville. The term “sanctuary city” generally refers to places that do not help federal immigration authorities deport undocumented immigrants.

Hodgson, whose county does not include any sanctuary cities, made the splashy remarks while speaking today before the House Subcommittee on Immigration and Border Security.

Here’s what he said, as reported by 7 News’ Sharman Sacchetti:

These officials pledge not to work with, cooperate or even communicate with federal immigration enforcement. As a result, these “safe zones” have become magnets for illegal aliens, some of which have violent criminal records. At best, sanctuary cities are a direct violation of trust between the legal residents and the elected officials who took an oath to protect them at all costs. At the worst, it’s careless, illegal, and extremely dangerous. If these sanctuary cities are going to harbor and conceal criminal illegal aliens from ICE, which is in direct violation of Title 8 of the US Code, federal arrest warrants should be issued for their elected officials.

Of course, no one is going to be rounding up and arresting mayors and City Councilors, or whoever. But you already know that. And, despite the hysteria about immigrants committing acts of violence against American patriots, study after study has shown immigrants are not more likely to commit crimes than anyone else.

But this is Hodgson’s thing. In January, he proposed putting inmates in the prisons he oversees to work building President Trump’s proposed Mexican border wall. To induce maximum rage, he named his initiative Project NICE. He also has a history of stunts like charging prisoners rent—a proposal he has recently tried to rekindle.

Hodgson disagreed, saying that if leaders of sanctuary cities are “ignoring federal law and are doing what they can to harbor people, they are in defiance of that law.”

Earlier, oe Curtatone fired back on Facebook. “[W]e’re not breaking any laws,” he writes, adding, “I’ll say the same thing about Sheriff Hodgson’s ridiculous statements as I did about Louisiana Gov. Bobby Jindal when he said the same thing – come and get me.”

He was referring to this exchange from August, 2015.

Newton Mayor Setti Warren chimed in, too. “My dad was arrested for the ‘jail-able offense’ of sitting at a lunch counter,” Warren wrote on Twitter. “He wasn’t afraid of threats like this, neither am I.”

My dad was arrested for the “jail-able offense” of sitting at a lunch counter. He wasn’t afraid of threats like this, neither am I. #mapoli https://t.co/X2xHTSVnpf

On Sunday, he appeared on the Fox News show Justice with Judge Jeanine.

Make-up time: Sheriff getting ready for appearance on @JudgeJeanine on @FoxNews. Tune in at 9pm. pic.twitter.com/iwKOE1ikvF