Why Is Elizabeth Warren So Hard to Love? - Page 2 of 3
Subscribe
Follow
I'm a scraper
This search result is here to prevent scraping 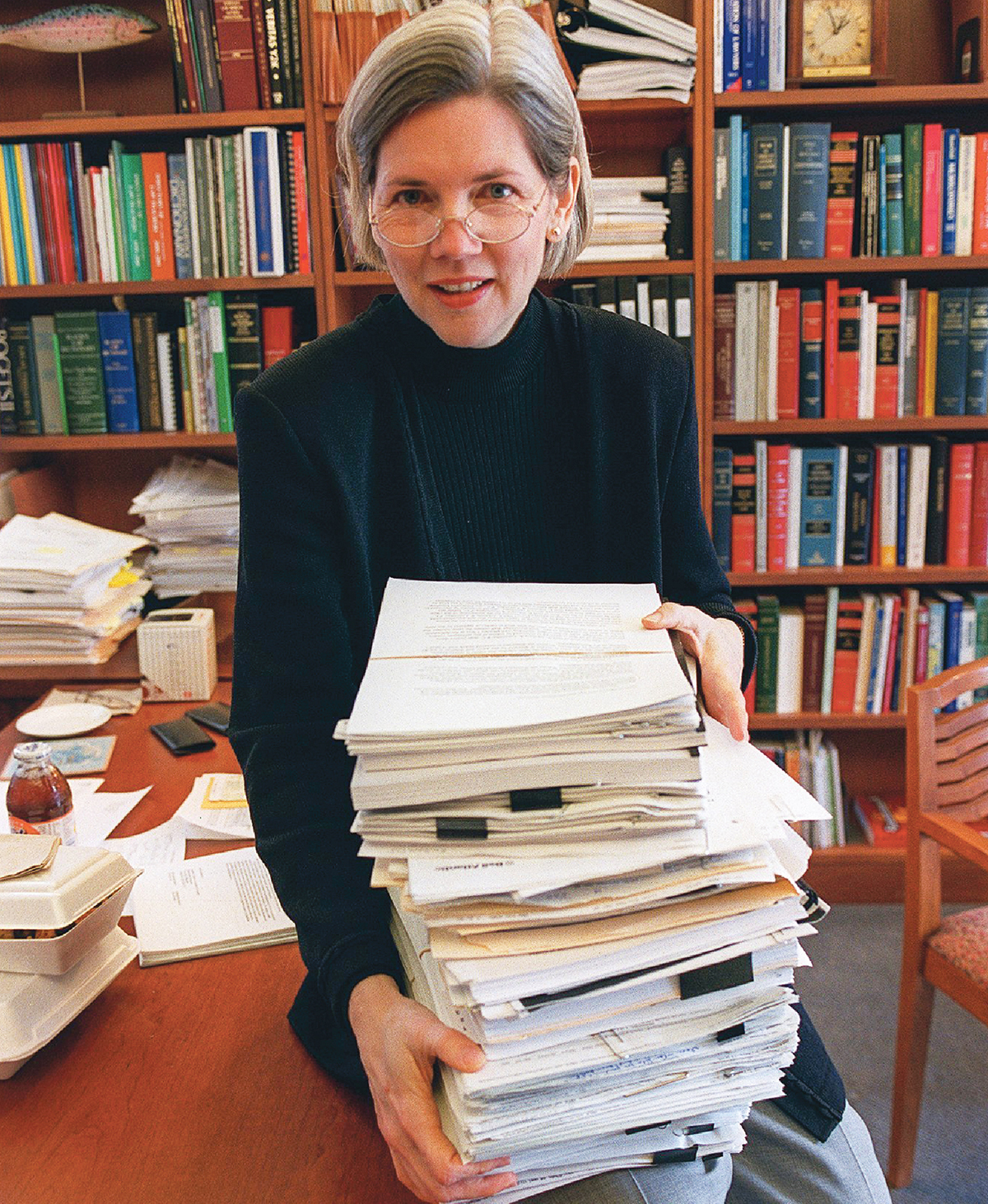 Research in hand, Warren had no qualms confronting the powerful interests and lawmakers that arrayed against her. As a professor she fought legislation to overhaul the bankruptcy system that she viewed as a giveaway to the credit-card industry. One memorable battle came during a 2005 hearing on bankruptcy-reform legislation when Warren stood up to then-Senator Joe Biden of Delaware, one of the most senior members of Congress. She had recounted one of the many horrifying stories she’d accumulated during her research, of a woman who had borrowed $2,200, paid back all but $100 of it over the next two years, and after all the fees and interest, wound up owing more than she’d borrowed, forcing her to file for bankruptcy. The credit-card industry was plenty screwed up, she said, but at least that woman had a fair bankruptcy system to protect her—a safety net that, in Warren’s view, would vanish under the proposed bill that Biden supported. “Your problem with credit-card companies is usury rates,” Biden protested. “It is not about the bankruptcy bill.”

Warren wouldn’t cave. “But, Senator, if you are not going to fix that problem, you can’t take away the last shred of protection from these families.”

“I got it,” Biden said, relenting. “You are very good, professor.”

Her combination of expertise and plainspoken bluntness led to a gig on the Dr. Phil show, where she served as a personal financial guru of sorts to the show’s guests and its audience of millions. If her first “aha” moment was uncovering the real causes of consumer bankruptcy, her second was discovering the power of a big platform, even if all she did was serve up TV sound bites. “You’ve been doing this work for 20 years now, and it is unlikely that any of it has had as direct an impact as these 45 seconds,” she later told a reporter. “Is it all about writing more academic articles, or is it about making a difference for the families you study?”

For all her successes, she was still an outsider looking in on the policymaking machine in Washington, DC. But Warren’s years-long work on bankruptcy reform—an industry-friendly bill passed, over her objections, in 2005—caught the eye of then–Senate Majority Leader Harry Reid. In 2008, Reid asked her to chair a new watchdog group, the Congressional Oversight Panel, composed of outside experts and current and former lawmakers and created to track the government’s bailout of the nation’s largest banks in the wake of the financial crash. Warren and her four colleagues published reports each month that found, among other things, that the federal government—and, by extension, the American taxpayers—had overpaid by $78 billion when it rescued the too-big-to-fail banks.

It was around this time that Warren developed a public following as a merciless interrogator of government officials, Republican and Democratic alike. Video clips of her grilling Treasury Secretary Timothy Geithner, an Obama appointee, over such arcane subjects as credit-default swaps quickly racked up hundreds of thousands of views.

With momentum building in her favor, Warren lobbied heavily for any Wall Street reform legislation to include a new agency tasked with protecting consumers. She’d popularized the idea in 2007 when she argued that mortgages and credit cards should be regulated like toasters, and she knew she’d have to fight hard to withstand the pressure of the banking lobby and hostile politicians. “My first choice is a strong consumer agency,” she said in 2010. “My second choice is no agency at all and plenty of blood and teeth left on the floor.” Warren’s efforts paid off: The Dodd-Frank financial reform law enacted later that same year called for the creation of a Consumer Financial Protection Bureau. But in one of the great disappointments of Warren’s career, President Obama snubbed her and appointed Richard Cordray as director of the new agency. One of the more respected and feared figures in Washington was now out of a job. 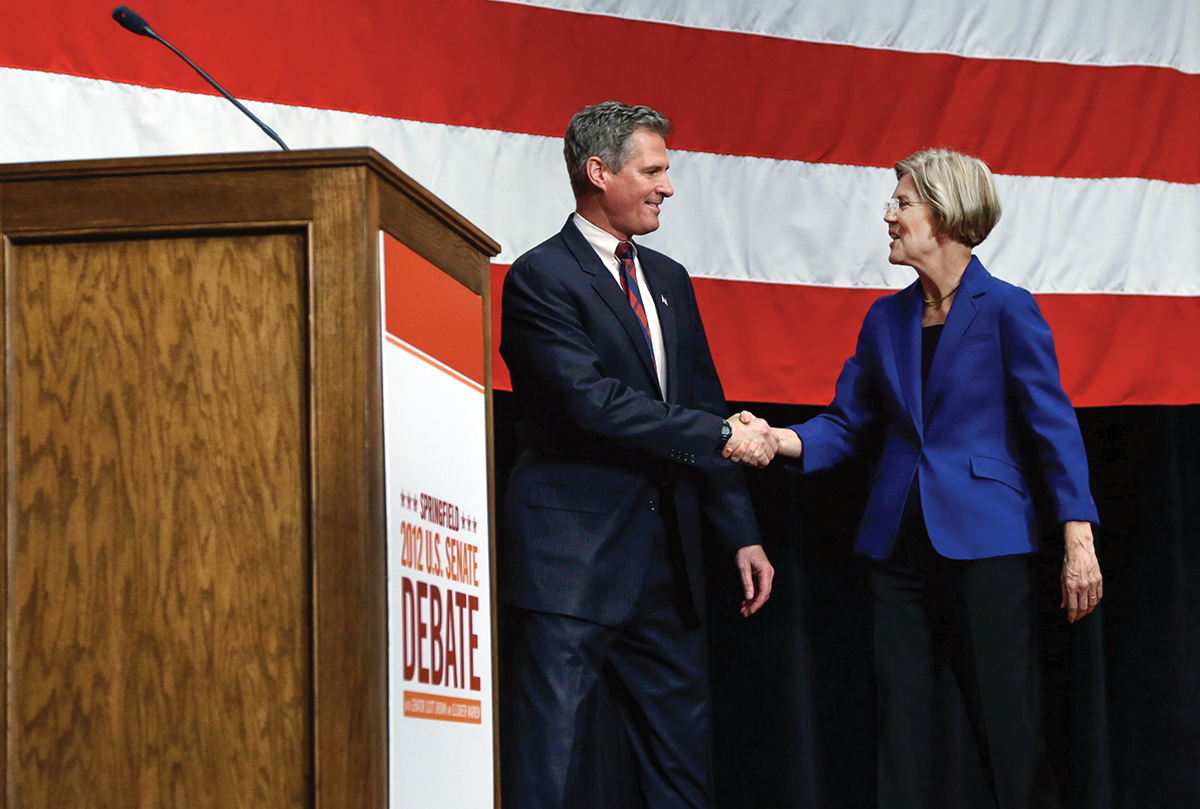 Elizabeth Warren had to be convinced to run for the Senate. Scott Brown, a truck-driving Republican who’d won a special election in 2010 to fill the seat left vacant after Ted Kennedy died, was slipping in the polls and his fish-out-of-water routine wasn’t playing well with voters at home. Still, Warren had her hesitations. According to people close to her, it took a sustained effort by her friends and allies to show her that, in the hands of the right person, a senator at the bottom of the seniority list could still wield influence. Political consultant Doug Rubin remembers his early conversations with Warren about her campaign. “Most of those initial conversations with candidates are about mechanics: ‘How do I put a campaign together?’ ‘Who should I talk to?’” Rubin says. Warren was different. “She knows who she is. She knows what she wants to say. She’s very clear about it. The only question is: Is what she wants to say translatable into a political campaign?”

On September 14, 2011, Warren announced that she would run. In her rollout video, she spoke of middle-class families that had been “chipped at, hacked at, squeezed, and hammered for a generation now” and of a political system that was “rigged for big corporations that hire armies of lobbyists.” She singled out the company GE for not paying taxes, while student-loan debt piled up and financial aid to seniors got cut. “It isn’t right,” she said, “and it’s the reason I’m running for the United States Senate.” It was a powerful declaration of values, albeit with a curious absence: Warren didn’t once mention Massachusetts.

From the start, Warren’s message was geared as much to a national audience as it was to the voters in her state. At an early event in Andover, Warren gave a stirring defense of liberal economics and government to a roomful of activists. “Now, look,” she said, “you built a factory and it turned into something terrific or a great idea. God bless. Keep a big hunk of it. But part of the underlying social contract is, you take a hunk of that and pay forward for the next kid who comes along.” An attendee recorded the remarks and put them on YouTube. “I got a call from a reporter saying, ‘What about this video?’” Rubin says. “I said, ‘I have no idea what you’re talking about.’” The clip went viral, and President Obama cribbed Warren’s message during his 2012 campaign. “What that video showed us,” Rubin told me, “was that this was something that could go beyond Massachusetts and have a national appeal. How do we leverage that to help us in Massachusetts?”

With money, for starters. Warren’s campaign raised a record $42 million on the way to a bitterly fought victory. Brown had hammered Warren for claiming Native American ancestry and for her decision to self-identify as a minority while working at the University of Pennsylvania law school. The controversy bogged down Warren’s campaign for months—Rubin has said the campaign could have handled it better—but it wasn’t enough to tip the race in Brown’s favor. To this day, though, it remains the preferred bludgeon of Warren’s conservative foes, and it will no doubt resurface during her reelection campaign.

Warren entered the Senate in 2013 with her reputation as a liberal leader fully formed, and she set out to use her platform to influence the big national issues she’d built her career on. Her office churned out an unrelenting sequence of letters, statements, and reports advocating action on economic issues both sexy and obscure: big banks, executive compensation, the market for over-the-counter hearing aids, wage theft by federal contractors. She took on the Obama administration almost single-handedly when she blocked the nomination of Wall Street banker Antonio Weiss to be the third-ranking official at the Treasury Department. The liberal base soon branded itself the “Elizabeth Warren wing” of the party.

As an advocate for progressive causes, Warren rivals Ted Kennedy. By other measures, the jury is still out. What’s often overlooked about Kennedy, the “lion of the Senate” and liberal icon, was his laserlike focus on delivering for the state. He first ran for Senate in 1962 with the slogan “He Can Do More for Massachusetts.” When his back was against the wall, like during his bitterly fought 1994 reelection campaign against Mitt Romney, Kennedy touted what he’d done for the state, trotting out oversize Treasury checks on the campaign trail: “Here’s $750,000 for preliminary work on restoring rail service between New Bedford and Boston. Here’s $400,000 for the cleanup of Buzzards Bay. Here’s $1 million of EDA money….”

“What made Senator Kennedy great,” says Ben Downing, a former Democratic state senator who represented the Berkshires, “was that he found that perfect balance between being a national leader—the liberal lion—and being the guy in the delegation who you would pick up the phone and call if you had an immigration issue or a problem with Medicare that you couldn’t figure out.” Dennis Kelleher, president and CEO of the financial-reform group Better Markets, as well as a former aide to Kennedy, recalls that Kennedy’s constituent-services operation was “second to none” among U.S. senators. “If Kennedy ever heard that one of his staff didn’t respond to somebody lickety-split, he’d blow a gasket,” Kelleher told me. “There was nobody who was worried more about the bread and butter of Massachusetts than Ted Kennedy.”