Why Is Elizabeth Warren So Hard to Love? - Page 3 of 3
Subscribe
Follow
I'm a scraper
This search result is here to prevent scraping

It’s hard to picture Warren campaigning with blown-up treasury checks. Warren has never enjoyed the same level of home-state support as Kennedy or even a Republican like Governor Baker. “Her numbers have never really been off the charts,” says Steve Koczela, president of the MassINC Polling Group. “The thing that’s made it hard for her to be in Charlie Baker territory is [that] Republicans have never warmed to her.”

Unlike Baker and Kennedy, though, Warren doesn’t aspire to be a bipartisan uniter. She’s an advocate for her specific issues, not a master legislator or dealmaker. Consider her vote on the 21st Century Cures Act, which contained $1 billion in funding for opioid prevention and treatment at a time when opioids are ravaging her home state, killing four to five people here per day. She called it a massive giveaway to the pharmaceutical industry and was one of only five senators to vote against it. In a 2015 index measuring the bipartisanship of U.S. senators compiled by the Lugar Center and Georgetown University’s McCourt School of Public Policy, Warren ranked 85th out of 98. (The index excludes the majority and minority leaders.)

There’s also, of course, the matter of blatant sexism and the subtle—and not-so-subtle—misogyny that seems to be ingrained in American politics. “Kennedy’s aggressiveness versus a woman’s ability to be aggressive in politics is always going to be a problem,” Goldman, the Democratic consultant, says. But it’s not a problem isolated to the power brokers of DC. As Jill Filipovic, of Cosmopolitan, noted in a recent column, Warren has gone from “a handy shield for Hillary-hating leftists to use as a defense of sexism” to a “woman who may actually be seeking power against a man, not a theoretical interloper against another woman.” Filipovic and many others argue that even the most enlightened liberal men are “reflexively hostile” to a woman seeking power—let alone a woman who rips the sitting president of the United States by telling him to put on his “big-boy pants.”

To lift her approval ratings out of the low to mid-50s, Warren needs to appeal to independent and moderate Republican voters in Massachusetts, something she has yet to do or show much interest in. She has her message, and you either love her or loathe her for it. “There’s not a lot of middle ground on Elizabeth Warren,” says Will Keyser, a Boston-based consultant who previously worked for Ted Kennedy and now advises Governor Baker. 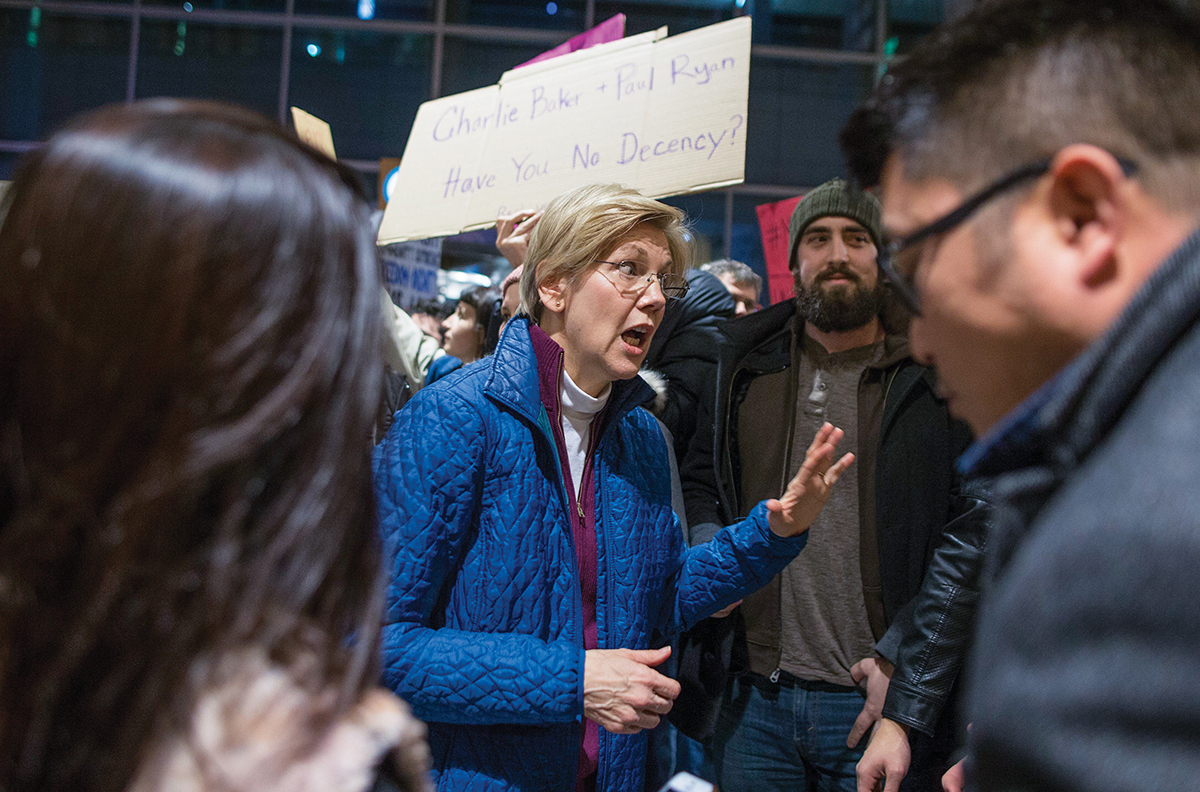 Warren expected to find herself in the opposition following this past presidential election—only she figured the president she would be pressuring would be Hillary Clinton. Warren envisioned her role for the next four years as prodding President Clinton to surround herself with cabinet secretaries and staffers who would carry out the decidedly liberal policy agenda Clinton had established on the campaign trail. Then Trump pulled off the upset and sent Warren scrambling to rewrite her postelection speech. Suddenly her remarks, in front of a crowd at the AFL-CIO, morphed into an olive branch of sorts directed toward Trump. She pointed out that Trump, during the campaign, had spoken to “the very real sense of millions of Americans that their government and their economy has abandoned them,” and she vowed to work with him if he was serious about his pledges to help working people. “When President-elect Trump wants to take on these issues,” she said, “when his goal is to increase the economic security of middle-class families, then count me in.”

But as Trump began assembling his cabinet of billionaires and enlisting alums of Goldman Sachs to advise him on the economy, Warren changed her tune, and she has now emerged as the face of the anti-Trump resistance. It’s a role that hasn’t been without its hiccups—notably, when she and several other progressive senators voted in favor of housing and urban development nominee Ben Carson at the committee level, faced tremendous blowback from the base, then switched to a “no” during the full floor vote. “There was virtually no new information between the time she said she was going to support him to the time she opposed,” says Marty Linsky, a Harvard Kennedy School faculty member and ex-aide to former Governor Bill Weld. “The only new information was that her national base was furious.”

The question on the minds of many in Boston and Washington is this: Can Warren navigate the demands of leading the resistance and do it without turning off Massachusetts voters, many of whom consider themselves moderates, and still get reelected?

Steve Koczela, whose firm produced the January WBUR poll that found weak support for Warren’s reelection, told me that any questions about softening in the public’s support of her had to be weighed against her 2018 challengers. Former Red Sox pitcher turned right-wing Trump clone Curt Schilling was weighing a run, only to throw his weight behind V.A. Shiva Ayyadurai, a Boston entrepreneur who claims to have invented email and who announced in a 4:23 a.m. tweet in February that he would challenge Warren. In early March, reports surfaced that John Kingston, a Republican donor and successful businessman worth millions, was eyeing a potential run. One political consultant I spoke with said he’d recently met with two individuals who have the money to self-fund a Senate campaign and were weighing a challenge to Warren. While nobody has officially emerged as of yet, rest assured that Republicans are eyeing Warren’s numbers. If they can find a candidate who jibes with Charlie Baker and displays a modicum of levelheadedness and bipartisanship, they will attack Warren at every turn and paint her as a partisan bully who places her political ambitions and hatred for Trump over her constituents’ needs.

Bring it on, say Massachusetts Democrats. For now, what concerns them about Warren’s reelection isn’t so much who might run against her as how much of a national role she should play in opposition to the Trump administration. Rubin told me his biggest worry was Warren getting pulled in too many different directions by national groups over the next two years. “I worry that that is a tough thing for her to handle,” Rubin, who says he is not working on Warren’s 2018 race, told me. “She’s done it well so far. But my concern is, as we look to the midterms, there’s an increased demand on her time. She’s only one person, and she has a job to do here in Massachusetts and in the Senate.”

Warren’s hard-won reputation as a fighter is now being tested like never before. Trump has taken direct aim at her on Twitter and in private meetings with lawmakers, reviving the issue of her Native American ancestry and referring to her as “Pocahontas.” And it’s not just Trump—national Republicans are betting that Warren’s liberal reputation and in-your-face persona can be used against Senate Democrats up for reelection in Trump-voting swing states. “Elizabeth Warren is the face of the Democratic Party,” Senator Cory Gardner, who chairs the National Republican Senatorial Committee, told Politico.

Warren scoffs at Trump and her Republican critics. “He needs some new material,” she says of Trump’s “Pocahontas” attacks. “If he were a reality show, he would’ve been canceled by now.” When I asked her about how she balances her role as the leader of the resistance and representing Massachusetts, she rejects the premise of the question. “They reinforce each other,” she says. Do Massachusetts voters want to see her fill the role of anti-Trump advocate? “It’s just who I am,” she insists.

Warren had nearly $5 million in the bank to begin the year, a sign she isn’t taking reelection lightly. If she wins—and, ideally for Democrats, wins big—the pressure on her to run for president in 2020 will be immense. Progressives in Massachusetts and nationwide are already clamoring for her to challenge Trump, and the list of Democratic leaders better equipped for the task than Warren is short. “Her message is literally the way forward for progressives and Democrats nationally,” Rubin says. “Democrats have to figure out a way to communicate that message with people, or we’re in trouble.”