The MBTA’s Orange Line Mockup Is at City Hall

You can check it out today through Wednesday. 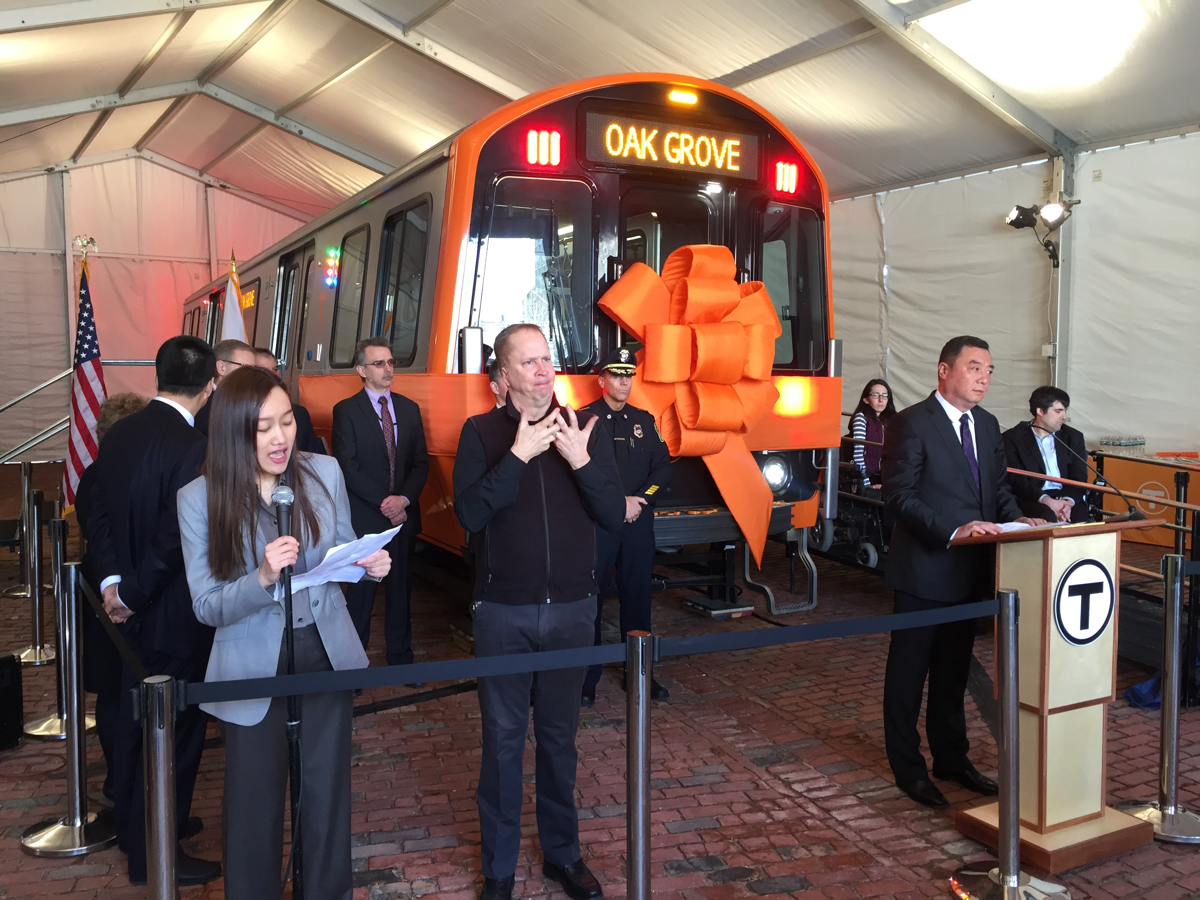 With a lot of fanfare, MBTA’s mockup of the new Orange Line trains made its debut at City Hall Plaza today, where it will be open to the public through Wednesday.

The mockup, a two-thirds-size model of the way the brand new additions to the Orange Line will look when they start hitting the tracks beginning late this year, was produced by CRRC, the Chinese company that plans to manufacture the fleet of 152 Orange Line and 252 Red Line trains at a factory in Springfield. It was unveiled this morning wrapped like a gift in an orange bow, as busker Vivian Luo played the hits on her violin.

So yeah safe to say the T is stoked about the new trains. pic.twitter.com/xQoGn6KPWo

MBTA Chief Administrator called the forthcoming trains “a real game-changer for our riders.” Transportation Secretary Stephanie Pollack framed them as “part of a multi-billion dollar generational reinvestment” in the T after decades of “underinvestment.” She said the new trains would be “safer,” “more comfortable,” and easier for people with mobility impairments to use.

The model arrived in Boston earlier this year. Officials at the T have had the opportunity to inspect it since then and suggest any tweaks to the original design. Gov. Charlie Baker got the chance to view it last week, and says he likes what he sees.

T officials say they want visitors to take a close look at the new model, test out its sleek new plastic interior and shiny new seats, and offer any suggestions they might have for how to improve it. The prototype is wheelchair accessible.

For CRRC, the Boston contract appears to be an important one. It was CRRC’s first in North America, and the Chinese government-owned company is now rapidly gobbling up manufacturing contracts around the country. It has so far won bids to build train cars in Philadelphia, Chicago, and Los Angeles.

At a ceremony Monday morning, Zhongyi An, the president of the CRRC in Changchun, China, hailed the mockup’s delivery as a “milestone” and gave a nod to the history of Boston’s subway system.

“We understand the pride and commitment to having the best transportation system available to residents and visitors to experience is important,” he said through a translator. “We thank you for believing in our ability to lead this project.”

Chuanhe Zhou, president of CRRC MA, said his team “remains on track to deliver a car to Boston that showcases the city’s commitment to public transportation and will transform the transit experience of Red and Orange Line customers.” The company estimates it will employ 150 people, he said.

He added, “We are proud to have this opportunity to work with America’s number one transit authority.”

Since the T received the train model earlier this year, officials have so far recommended only a few “slight improvements,” including adjustments to storage compartments, according to Bill Wolfgang, the T’s director of vehicle engineering. Also, the trains’ plastic seats have been updated. “We’ve incorporated a texture to prevent sliding,” Wolfgang says.

In August or September, Wolfgang says he and others will travel to China to view  a fleet of six completed Orange Line “pilot cars,” which will be fully operable and include engines, and ride them on a test track. If all goes well, those train cars are headed for Boston to be tested here on nights and weekends. Then, one shipment of trains at a time, prepare to say goodbye to fabric seats and wood paneling forever.