Not long after Tamerlan Tsarnaev bombed the Boston Marathon, investigative reporter Michele McPhee went looking for answers. What she discovered, detailed in this exclusive excerpt from her new book, Maximum Harm, might just change how you think about our government and law enforcement forever. 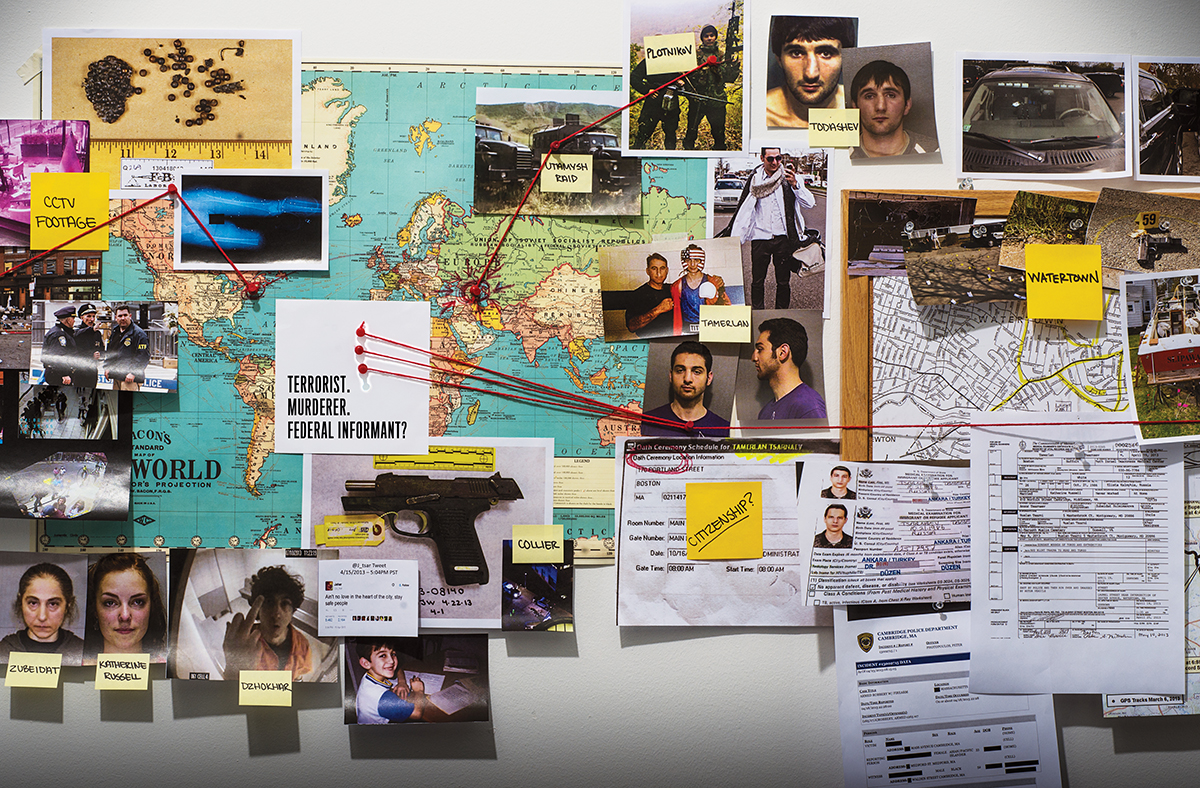 As darkness descended over the village of Utamysh, Russia, one mid-July night in 2012, international soldiers, intelligence agents, and local police made their way inside a convoy of covered troop carriers to a carefully hidden encampment. They even brought a light-armored tank, knowing the men inside were heavily armed.

The hideout, a small farmhouse, was home to seven mujahideen, guerrilla fighters who had all vowed to bring sharia law back to Russia’s Northern Caucasus. They flew their own nationalist flag and consistently referred to Russian authorities as “invaders.” Two of the men, however, Islam and Arsen Magomedov, were more than mere guerrilla insurgents: They were notorious terrorists and commanders of the region’s most brutal criminal gangs. In all, they were suspected of orchestrating dozens of murders and deadly bombings of police checkpoints, civilian-filled trains, and Russian Federation television stations. Next to the Magomedovs stood five other men who ranged in age from 25 to 35, budding jihadists who had very few prospects when they left their families other than to go, as they said, “into the forests” to train. After a long day, the men went to bed—completely unaware that just outside the tiny village, under the cover of night, forces were preparing a raid that would level their camp.

Russian Interior Ministry counterterrorism troops wanted to move in without being seen by the prying eyes of Utamysh villagers, so they evacuated some women and children living near the camp. Not everyone in the Muslim village supported the continuing carnage in their region, but most distrusted Russian Federation law enforcement officials. As in most military operations, the soldiers moved silently as they carefully checked their guns and grenades, switched the safeties off their automatic weapons, and even loaded a small rocket-propelled grenade. They wore combat gear, and not for aesthetic reasons. Inside the hideout were some of the most violent men in the Northern Caucasus, an area that has long been among the most volatile and lawless places in the world. At that time, it was not unusual for a Russian police officer to be assassinated weekly. The insurgents inside the Utamysh compound had been trained to believe that the Russians were invaders who—like pigs—deserved nothing less than slaughter, and had been taught that there was no greater honor than to die taking a Russian out.

When the radicals heard the sound of dried dirt and rocks being crushed under the weight of the tank and the troop movers carrying the enemy to their front door, according to a video that was later released by the Russian Interior Ministry, the mujahideen grabbed their own guns, prayed that Allah would give them strength in battle, and fired.

Tracer rounds and bombs lit up the village for hours. When the sun rose over the mountains on July 14, 2012, all seven of the Islamic militants were dead. The Russians photographed their slain bodies lying in the scrubby grass as proof of their deaths.

The camp was a smoldering shell. Cars belonging to the insurgents were still burning. The walls of the farmhouse were pitted with gunfire, and its windows had all been blown out. Russian Federation counterterrorism coalition forces also lost a man: an officer with the Russian Interior Ministry. Three other Russian agents had been wounded.

As the farmhouse continued to fume, while militants mourned and the Russian Interior Ministry prepared to bury its dead agent, one man left the region, somehow paying 2,050 euros for a one-way Aeroflot ticket from Sheremetyevo International Airport in Moscow to John F. Kennedy International Airport, and then to Logan airport on July 17, 2012. His name was Tamerlan Tsarnaev, a Russian expat whose entire family fled the region a decade earlier for Cambridge, Massachusetts, telling United States immigration officials that they would be killed because of their political affiliations if they ever returned home.

It remains unclear how the unemployed 25-year-old on welfare paid for the flight or exactly what he spent his time in Russia doing, or for whom. Less than a year later, he and his younger brother, Dzhokhar, carried out the Boston Marathon bombings, an act of terror so immense it would paralyze the entire city. Tamerlan would die on April 19, 2013, not long after a wild firefight with police and a high-speed chase in a stolen SUV driven by Dzhokhar, who fled the shootout and prompted a nearly daylong manhunt before being captured.

When Dzhokhar’s trial started nearly two years later, his famed death-penalty defense attorney, Judy Clarke, startled court spectators when she flat-out admitted her client was guilty of the bombings. At one point, she pointed to a photo of older brother Tamerlan and explained, “There’s little that occurred the week of April the 15th…that we dispute.” But what about in the months and years before that?

During Dzhokhar’s trial, his defense attorneys raised provocative questions about the FBI’s mysterious involvement with Tamerlan. Had agents pressured him to be an informant? And if so, did that pressure play a role in the bombings? “We base this on information from our client’s family and other sources that the FBI made more than one visit to talk with [Tamerlan’s parents] Anzor, Zubeidat and Tamerlan, questioned Tamerlan about his internet searches, and asked him to be an informant, reporting on the Chechen and Muslim community,” Dzhokhar’s lawyers stated in court records. “We further have reason to believe that Tamerlan misinterpreted the visits and discussions with the FBI as pressure and that they amounted to a stressor that increased his paranoia and distress. We do not suggest that these contacts are to be blamed and have no evidence to suggest that they were improper, but rather view them as an important part of the story of Tamerlan’s decline. Since Tamerlan is dead, the government is the source of corroboration that these visits did in fact occur and of what was said during them.”

The FBI denies that Tamerlan was their informant, but to this day those questions have not been answered. What is the bureau trying to hide?

2009
Tamerlan Tsarnaev participates in a photo essay titled “Will Box for Passport.”

June 2011
The FBI closes its investigation on Tsarnaev.

September 11, 2011
The bodies of three men with connections to Tsarnaev are found nearly decapitated in a Waltham apartment.

January 21, 2012
Despite being watch-listed, Tsarnaev is allowed to fly from New York to Russia.

April 15, 2013
Tsarnaev and his brother bomb the Boston Marathon.

In 2011, the year before Tamerlan flew from Boston to Moscow, the Russians were already worried about him and his mother, Zubeidat. So in an unusual move, the agency shared its concerns with counterterrorism counterparts in the United States. To say the least, the relationship between the two countries—both of which were trying to eradicate Islamic terrorism—was based more on need than trust.

Still, on March 4, 2011, the FSB sent its first message about Tamerlan and Zubeidat to the FBI’s legal attaché in Moscow. Later, it sent the same memo to the CIA. While the FBI refuses to release a copy of the letter, FSB officials read it to a congressional delegation that included Representative William Keating, a Democrat from Massachusetts and a former prosecutor. “It was amazing in its detail dealing with Tamerlan Tsarnaev,” Keating later said.

The letter, according to Keating and others, described intercepted text messages between Tamerlan, his mother, and Magomed Kartashov, her second cousin—a former Dagestan police officer who had become a prominent Islamist and leader of a group called Union of the Just (a Muslim advocacy group that has been banned in Russia because of its alleged affiliations with Muslim militants). The organization sympathized with radical Islamic insurgents who had declared war against Vladimir Putin’s Russian forces. Zubeidat and Tamerlan, the letter stated, were becoming adherents of radical Islam.

The FSB also provided full names, addresses, and phone numbers for many of the members of the Tsarnaev family, including Tamerlan and his mother. According to the FBI, it warned that Tamerlan “had changed drastically since 2010” and was preparing to travel to a part of Russia “to join unspecified underground groups,” namely, violent radical Islamists in the Caucasus who formed their own bandit groups, which were essentially ragtag insurgency gangs. The FBI’s legal attaché in Moscow sent a translated copy of the FSB’s warning concerning Tamerlan to the Counterterrorism Division of the FBI’s Boston field office, telling them “to take any investigative steps deemed appropriate and provide [the legal attaché in] Moscow with any information derived,” with the promise that the information would be forwarded to the Russians.

After receiving the FSB’s letter, a special agent in that Boston Counterterrorism Division, referred to in an Office of the Inspector General (OIG) report as “the CT Agent,” was assigned to conduct what the FBI called a threat assessment based on the information that the FSB had shared regarding Tamerlan’s and his mother’s increasing extremism.

In the months before Tamerlan left Boston for Russia, the CT Agent interviewed Tamerlan and his parents and reported his findings, the OIG said. The report concluded that there is no public evidence that the CT Agent contacted Tamerlan’s then-wife (Katherine Russell, also known as Karima Tsarnaeva)—at the least, notes about any contact with her never became part of any official file. Nor did the CT Agent visit the controversial Islamic Society of Boston mosque in Cambridge where Tamerlan prayed, despite its rumored connections to radical Islamists. The FBI would later issue a statement that in response to the FSB’s letter, agents “checked U.S. government databases and other information to look for such things as derogatory telephone communications, possible use of online sites associated with the promotion of radical activity, associations with other persons of interest, travel history and plans, and education history. The FBI also interviewed Tamerlan Tsarnaev and family members. The FBI did not find any terrorism activity, domestic or foreign.” And so the bureau closed its case on Tamerlan in June 2011.