What It’s Like to Do the Midnight Marathon Bike Ride

Thousands of cyclists sped from Hopkinton to Boylston Street the night before the Boston Marathon. 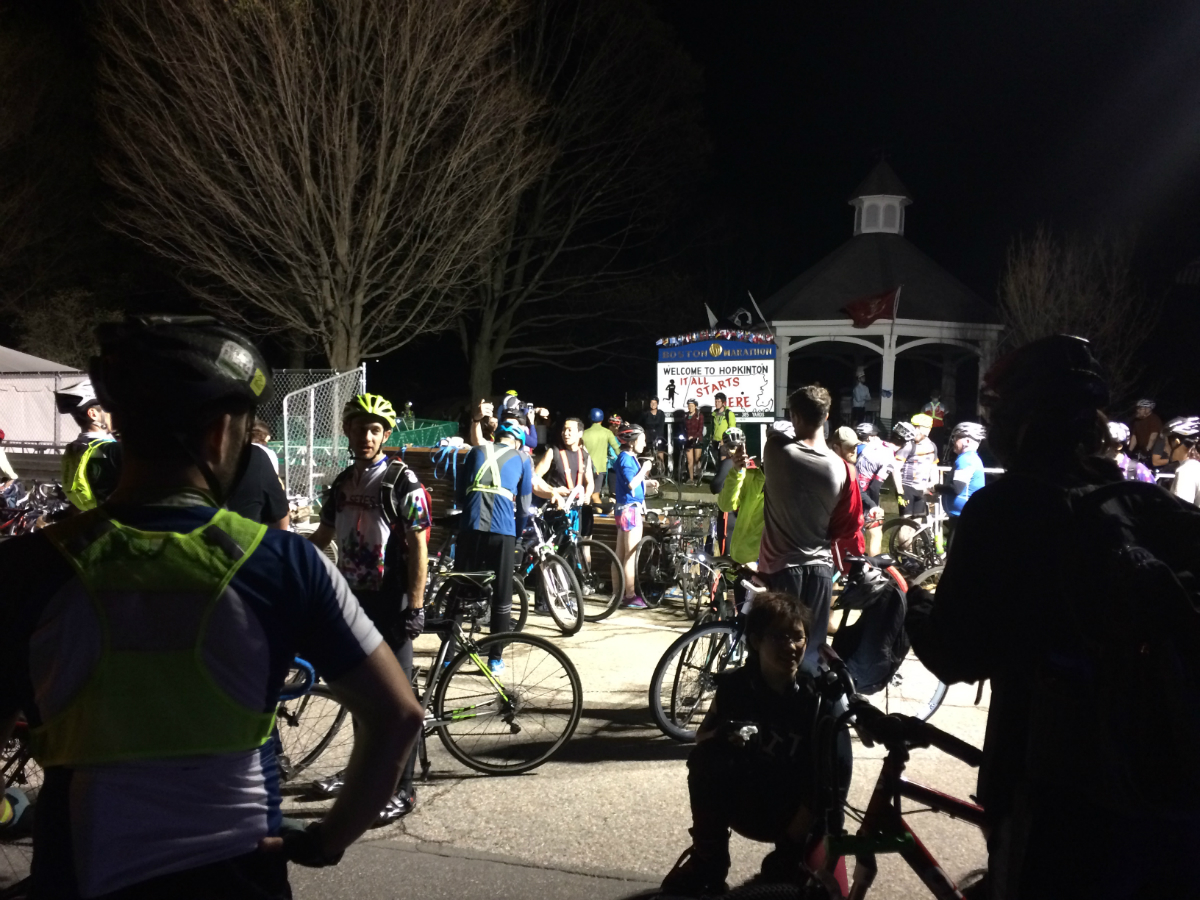 It’s 10:30 p.m., the night before the Boston Marathon, and there’s something different about South Station. Instead of the usual quiet of a late Sunday night, massive crowds of people are migrating toward the outbound train to Southborough, chattering excitedly and filling nearly every available seat. Sporting neon compression shorts, glow sticks, and helmets, they’re all here for one reason: to ride their bikes the length of the Boston Marathon at midnight. It’s not a race. It’s not sponsored by an energy drink company. It’s simply a group of people seizing an opportunity to have a little fun and put their own spin on one of Boston’s favorite traditions.

Like riding the Green Line to Kenmore the day of a Red Sox game, the train is filled with that special feeling that only comes from being surrounded by strangers who all have the same purpose. Greg Hum, the mastermind behind the midnight marathon, describes it as almost like the Polar Express. Anticipation. Excitement. Stifling yawns with adrenaline. People float up and down the aisles, greeting friends and calling to each other over seat backs. Someone comes by dropping off flyers for an upcoming ride through the Common to demand protected bike lanes from the city. 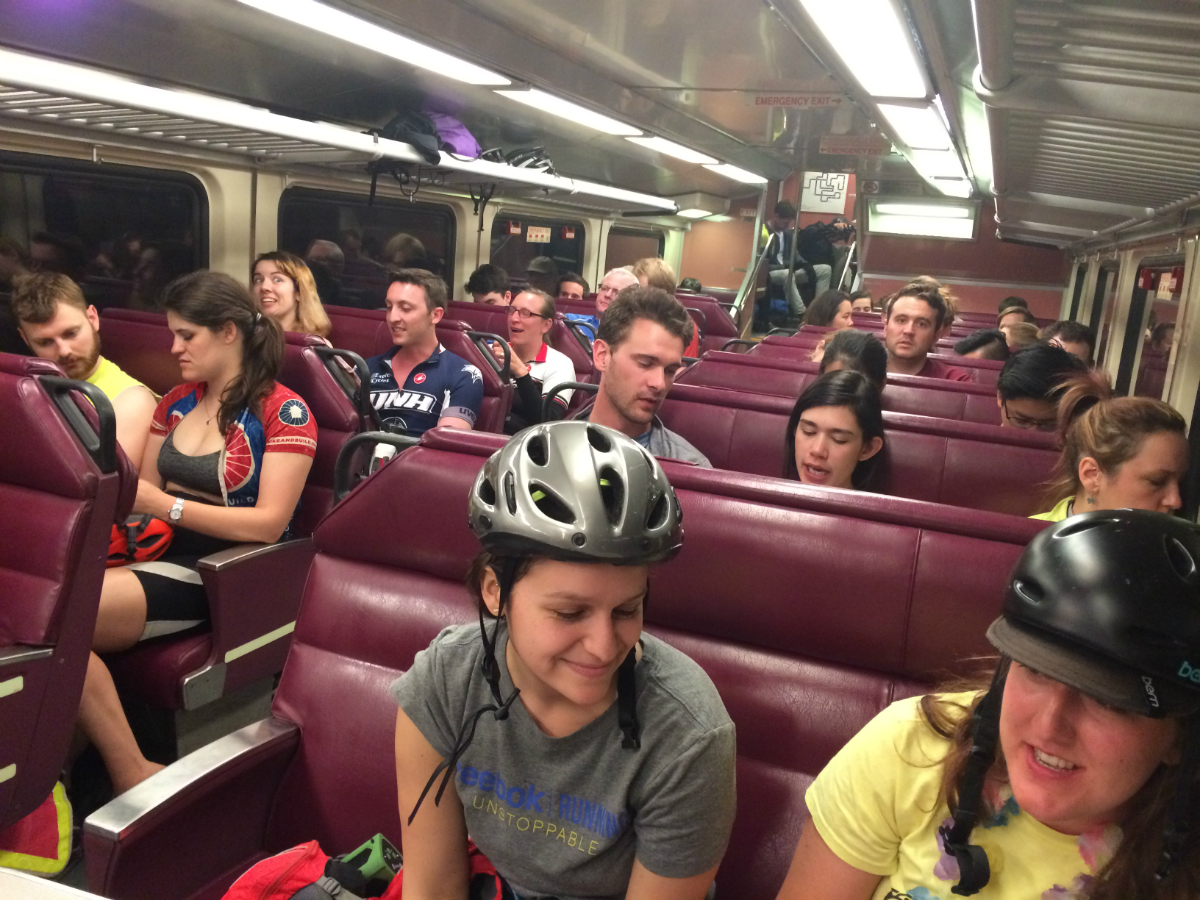 An hour later, the train arrives, greeted by flashing bike lights and the cheers of those who drove out earlier. The train-riders pick up their bikes from friends or the specially commissioned moving trucks, and the ride begins. 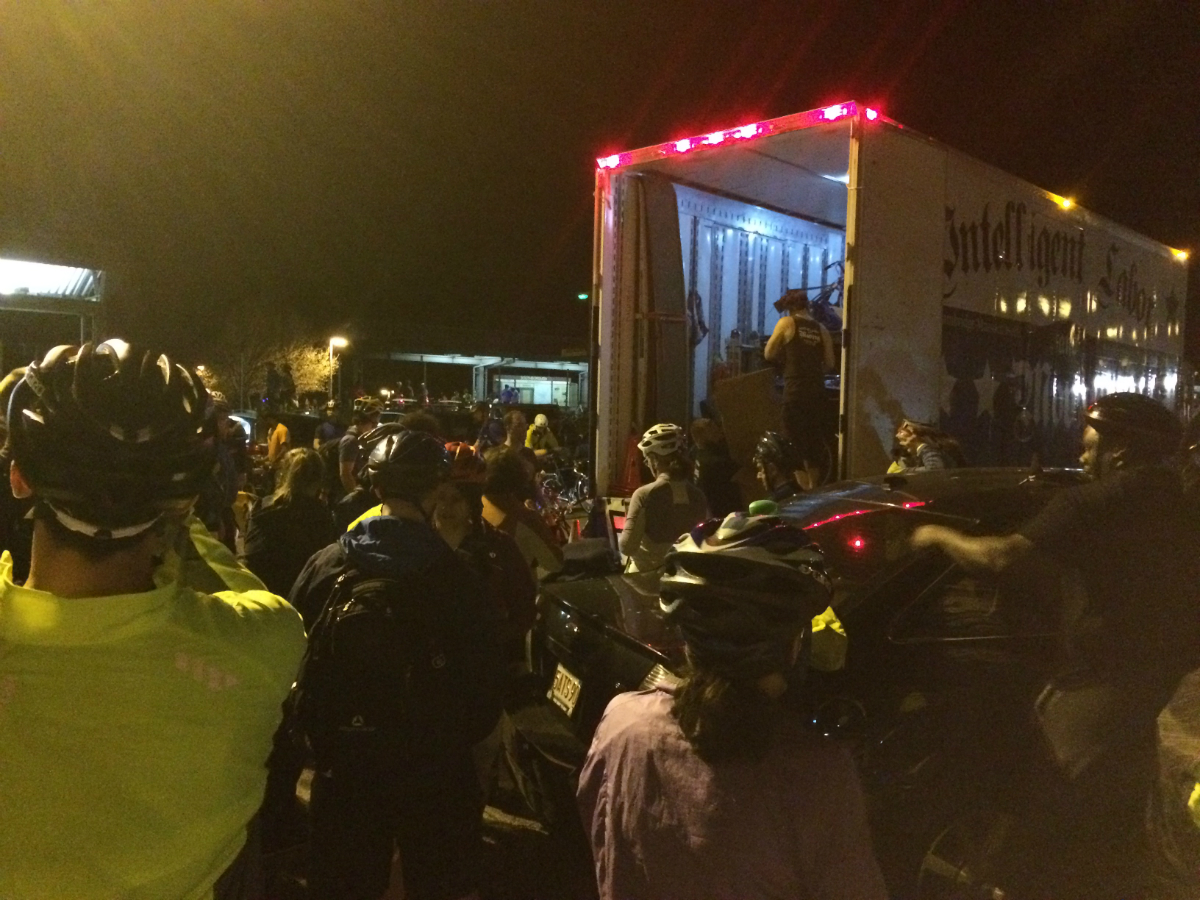 Situated about four miles away from the Southborough station, the marathon’s starting line in Hopkinton marks the first milestone of the journey. This beginning section is actually one of the most challenging parts of the ride, as it includes the steepest hill of the route, heading up 175 feet of elevation on Cedar Street. In order to avoid the dreaded incline, some riders choose to instead meet the group directly at the starting line. Friends gather for photos as police officers gently encourage everyone to move along.

With the hill behind us, this is where the fun really begins. The rest of the route is mostly downhill or flat, with some mild inclines, including the famous Heartbreak Hill (which isn’t quite so heartbreaking on two wheels). The weather couldn’t be more ideal: a balmy 65 with a soft breeze and the smell of recent rainfall still lingering in the air. 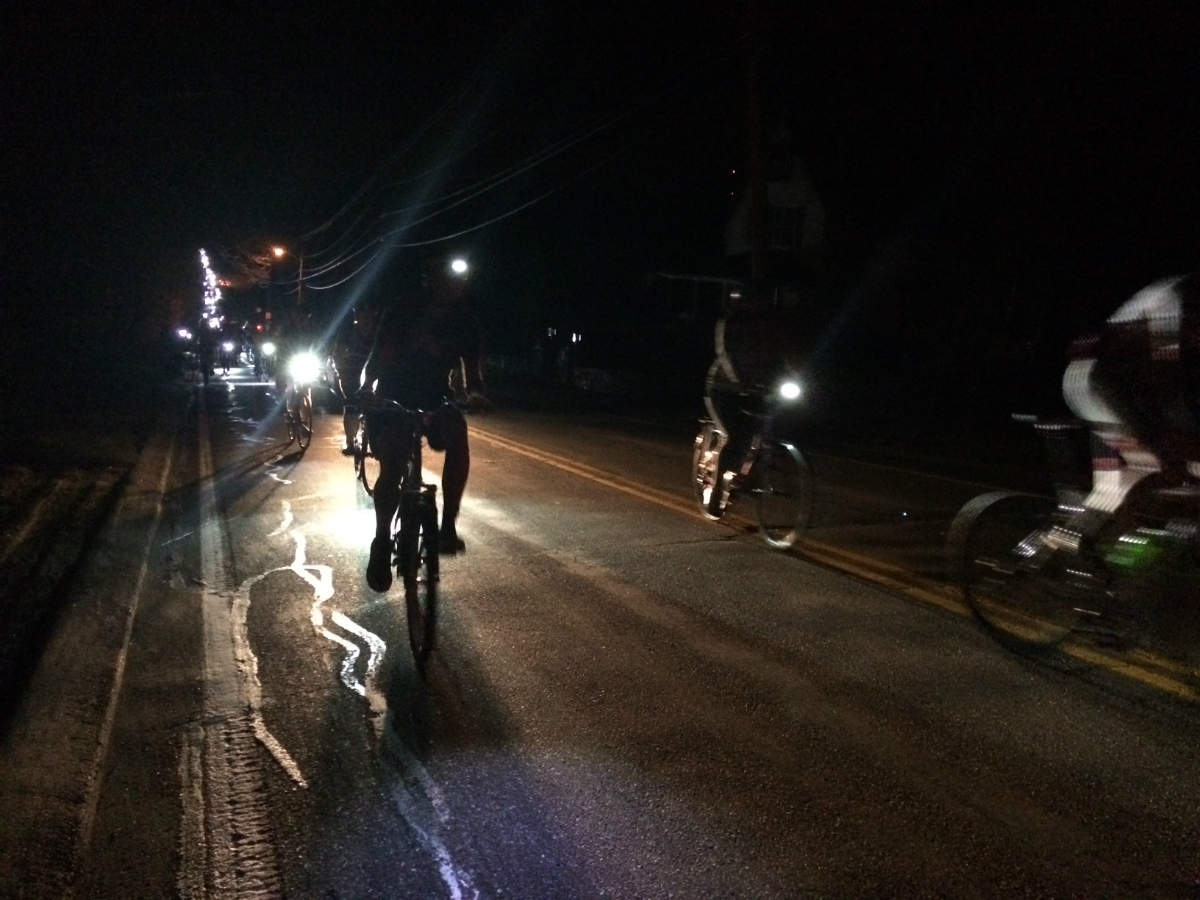 Deep in the suburbs, it’s almost pitch black, and coasting down the hills feels like weightlessly flying through empty space. Sometimes the ride is tranquil, with the waning moon shining up ahead, the chirps of spring peepers floating across the road, and the stars partially shrouded in a drifting cloud cover. These are the moments of quiet reflection and revelry in the simple joy of the wind hitting your face on a peaceful night.

At other times, the ride feels like a giant party with thousands of friends. LED lights abound and many carry speakers blasting everything from dance music to classic rock ballads. Riding through the crowd is like tuning a radio station as snippets of different songs burst in and out. Some wear tutus or leis, and one cyclist even has a backpack carrying his pet corgi. People ring bike bells at each other and shout out compliments. “I love your lights!” “Cool socks!” Steep downhills are often punctuated with whoops of joy that radiate back down the line, along with calls of “Car back!” warning riders to move aside. And it’s not bike-exclusive. All types of wheeled, manpowered vehicles are represented, including unicycles, skateboards, roller blades, and tandems.

In an almost-eerie shadow of the real marathon, a handful of spectators gather to cheer on the cyclists as they pass. Some hold signs, like one spotted outside Wellesley College that reads, “Cyclists are the backbone of this country.” Others offer provisions like Jell-o shots, water, beer, or dogs to pet. Volunteers are placed along the route, directing cyclists around turns and warning of upcoming train tracks.

The Boston Marathon represents the triumph of the human spirit, birthing stories of sportsmanship and the generosity of strangers, and the Midnight Marathon Bike Ride is no different. The camaraderie is palpable as small groups huddle around on the side of the road to help fix a flat tire, offer water and snacks, or wait for friends to catch up.

Eventually the quiet suburban streets give way to the outer boroughs of Brighton, then Brookline, and soon we’re following the three blue lines down the middle of Beacon Street, with the finish line just a few turns away. After so many miles, the final stretch down Boylston feels almost surreal, the familiar street thronging with exhausted but victorious cyclists. 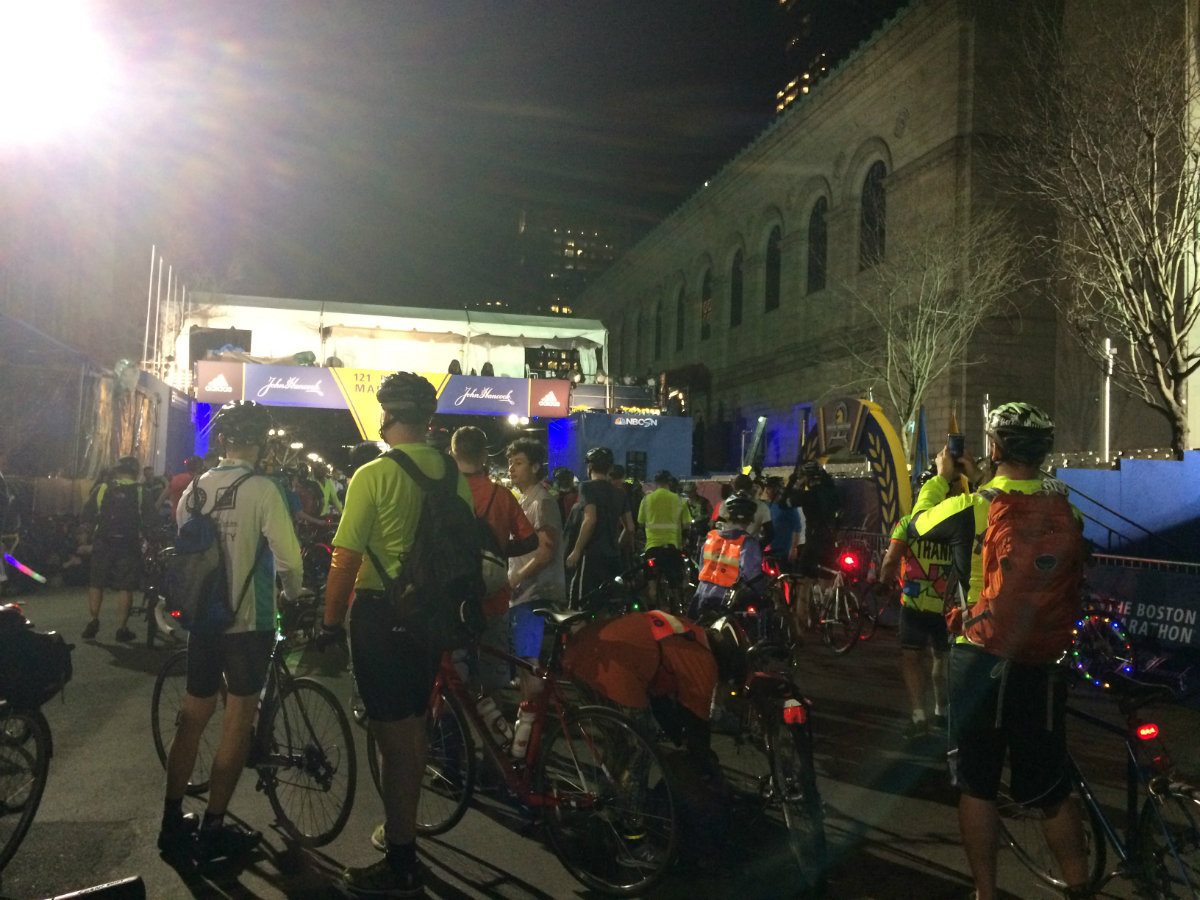 What started in 2009 as a crazy idea among a group of friends has grown to become an annual tradition in the cycling community, garnering nearly 3,000 participants. It’s exhilarating. It’s empowering. It’s a reminder of the strength that the marathon represents, and the strength of Boston.