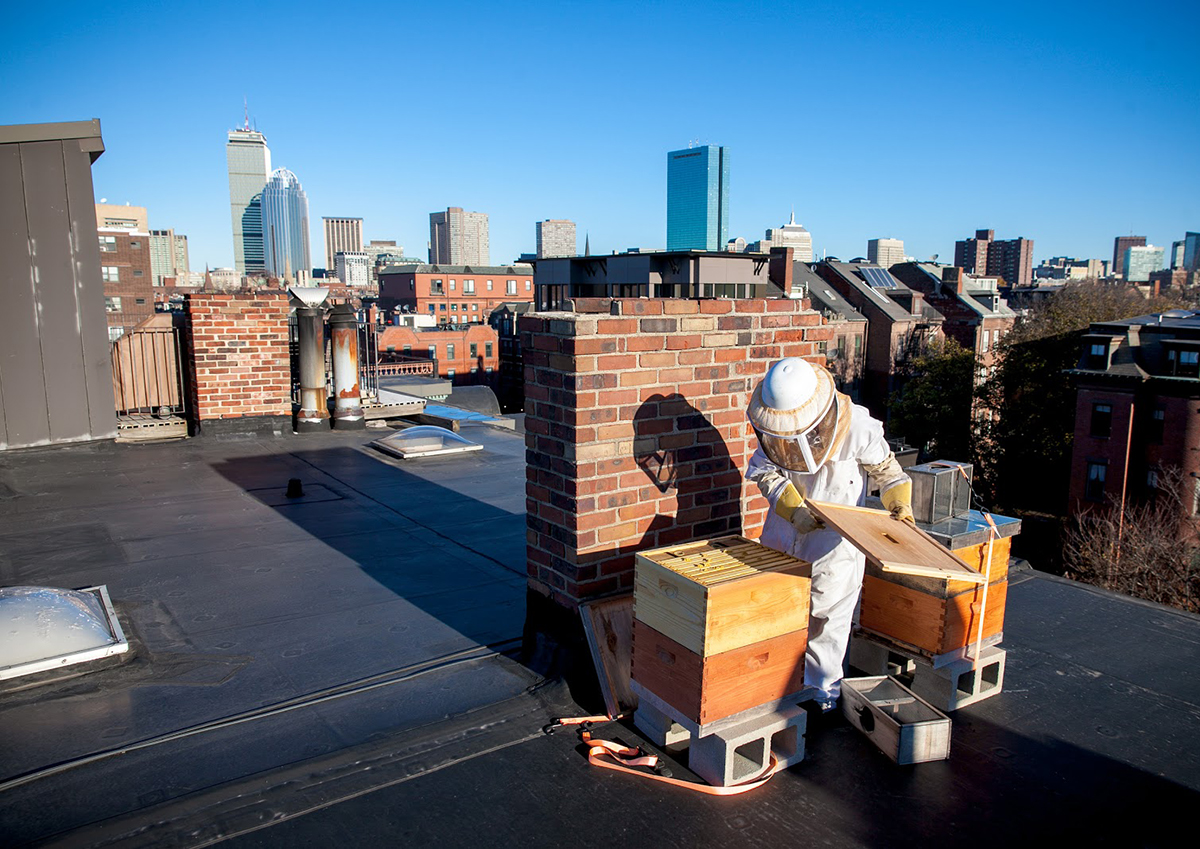 Last summer, Jennifer Kolchinsky enjoyed sitting with her four-year-old daughter on their back deck in front of two beehives, watching their bees, full of pollen, come back from trips around Bay Village.

“We were sad for sure,” Kolchinsky says. “They were such a great addition to our family, and we had grown really fond of them.”

It’s no secret urban beekeeping is becoming more popular throughout Boston. Numerous beehives are carefully hidden away at hotels, residences, and restaurants throughout the city. The Fairmont Copley Plaza Hotel, the Seaport Boston Hotel, the Intercontinental, the Lenox Hotel, the Taj Hotel, the Prudential Center, and the Christian Science Center all have hives.

But beekeepers face numerous challenges during the winter months, the most crucial being unexpected hive deaths because of temperature fluctuations, habitat loss, pesticides and chemicals, and mites. These issues, however, aren’t deterring hotels and residents from their commitments to increasing the important bee population that pollinates crops, such as nuts and fruits, as well as wild plants, to make new seeds.

“It’s much harder to keep hives now than in the mid-’80s,” says Bill Perkins, who owns Agricultural Hall, an urban agricultural store and resource center in Jamaica Plain. He describes this past winter as “a rollercoaster,” adding that “global warming is messing things up. The temperatures seem to fluctuate more than they used to.” This year, one out of Perkins’ own three hives died for unknown reasons. 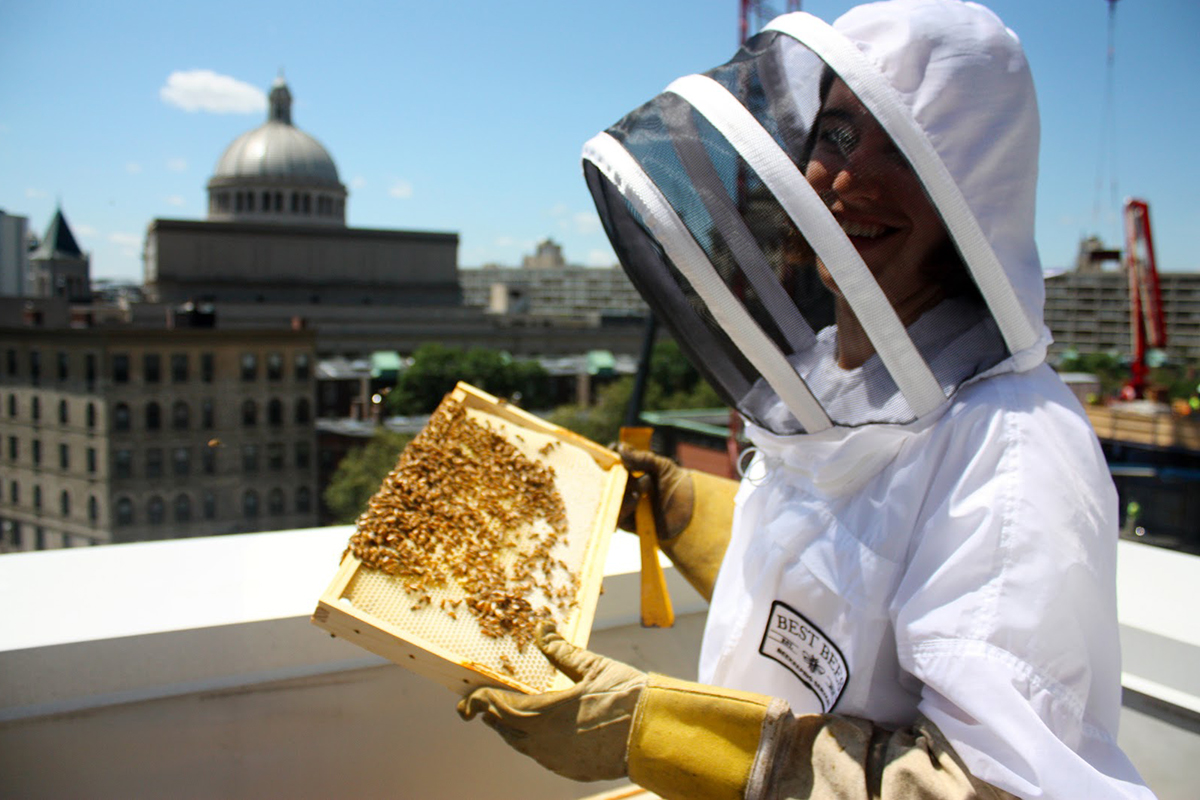 “It’s not that the bees can’t withstand this weather. They are already weak going into the winter,” says Melanie Wilson, events and outreach coordinator at Best Bees Company, a Boston-based beekeeping operation that helps people launch hives at their homes. “So they’re not well prepared to make it through.”

A winter does not particularly have to be cold, but rather, weather fluctuations are bad for the bees.

“You’ll get one of those really warm days, the bees will think it’s spring, but when they forage, there’s nothing. They don’t bring back pollen or nectar for energy,” Wilson says.

The majority of Best Bees’ clients are residential.

“There’s a high die-off of hives each year. It’s not normal, and shouldn’t be happening, but it is,” Wilson says. “But having people interested allows us to keep growing the bee population.”

Area hotels also could not stop their hives from dying during the winter months. The Fairmont Copley got both honeybees and mason bees in 2016 as part of its Bee Sustainable initiative. Last year, the hotel had five hives.

“The winter months, we see a lot of die-off within the hives. We lost two of our five hives,” says Timothy Clapp, assistant director of food and beverage at the Fairmont Copley Plaza. Despite this, the hotel will replace any hives that die, and Clapp says he sees the program getting bigger over time.

RELATED: Sneak a Peek at the Fairmont Copley Plaza’s Bees

In Boston, the Boston Area Beekeepers Association has grown to more than 500 members. The U.S. Department of Agriculture estimates that in 2016, there were 2.8 million colonies from which honey was harvested in the U.S.

More bees is good for plant pollination and for the variety of crops that rely on bees including cucumbers, raspberries, strawberries, and watermelons, among many others. Yet, according to the Center for Pollinator Research at Pennsylvania State University, the “pollinator population,” which includes bees, is declining worldwide.

The Bee Informed Partnership (a collaboration between the U.S.D.A. and the Apiary Inspectors of America) conducted a study of the 2014-2015 winter season of roughly 400,000 colonies manned by more than 6,000 beekeepers in the U.S., and found that 23 percent perished during the season, “a winter colony loss at rates greater than the average self-reported acceptable winter mortality rate of 18.7 percent.”

While hive losses are a known possibility, the movement to raise beehives in cities helps further increase the positive impacts from honeybee pollination. In fact, Wilson from Best Bees says that the company has found urban bees tend to be busier than their rural counterparts. “Bees in urban spheres are doing better than in natural spheres, measured by the amount of honey they’re producing,” she says.

Kolchinsky, who lives in Bay Village, began her beekeeping adventure by hiring Best Bees Company for $100 a month. She started in May 2016 with 10,000 Italian honeybees in two hives. “We learned that bees do much better in urban settings, we loved that we could contribute to the environment, and we thought it would be a great science experiment for our daughter,” says Kolchinsky, who often gives out honey as a gift to family and friends.

Though Kolchinsky says her bees did not make it through the winter due to mites, this spring she still plans to get new honeybees. “It’s been an amazing learning experience,” Kolchinsky says. “The bees are part of our family.”

Perkins explains that pests, such as mites, play a major role in killing hives. “It’s changed the landscape of beekeeping,” he says. But “[beekeepers] can fight back mites. I don’t think it’s weather related.” 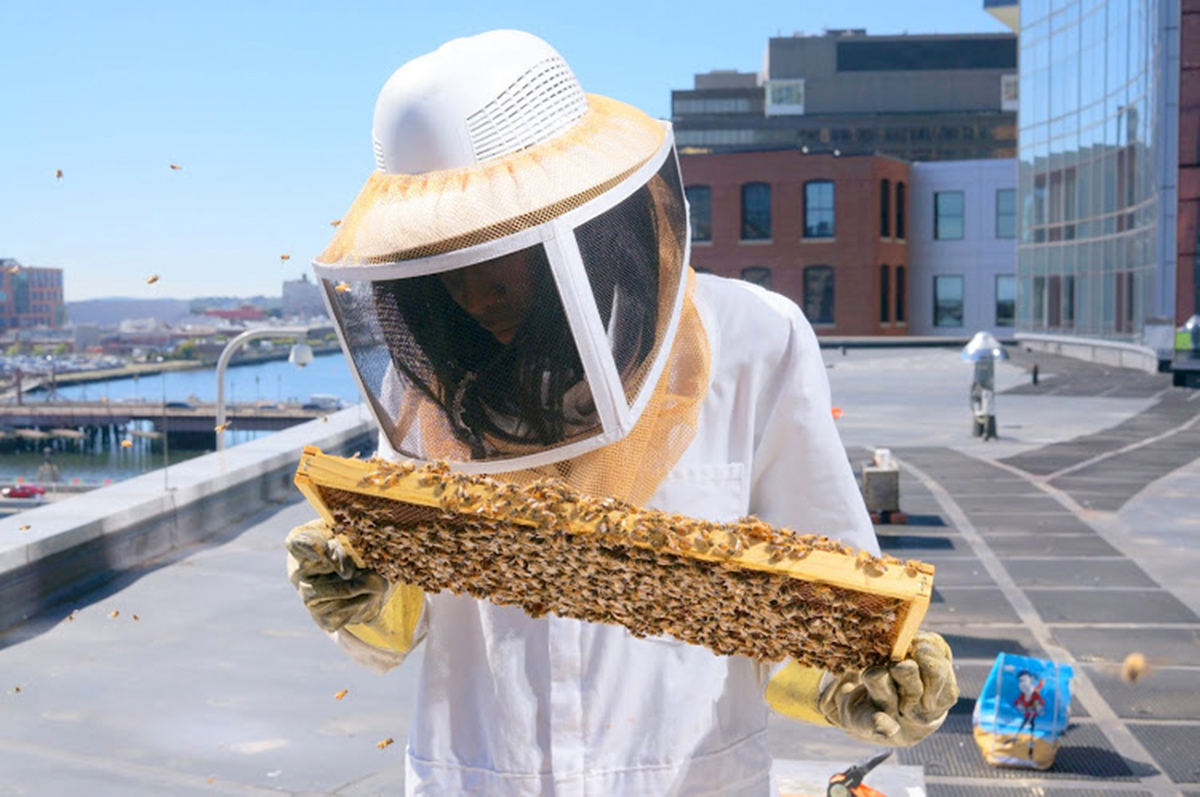 Catherine Bruce, a resident at the Intercontinental Hotel and member of the Boston Beekeepers Association, has kept bees at the hotel for the past three years, spending an average of $500 to $600 a year on bees and supplies. To learn about beekeeping, she took a class and worked with Best Bees as well. Bruce kept two hives, one of which was Best Bees’ responsibility. Every time they would observe her hive, she would come along to learn. After a year, she stopped using the service and paired up with an experienced mentor.

Yet, both of her hives died this winter, because of mold, a common winter problem. Seven out of the eight Intercontinental Hotel Hives died as well, she says.

“This year, climate change has not helped. We keep having warm winters and big temperature swings,” she says. 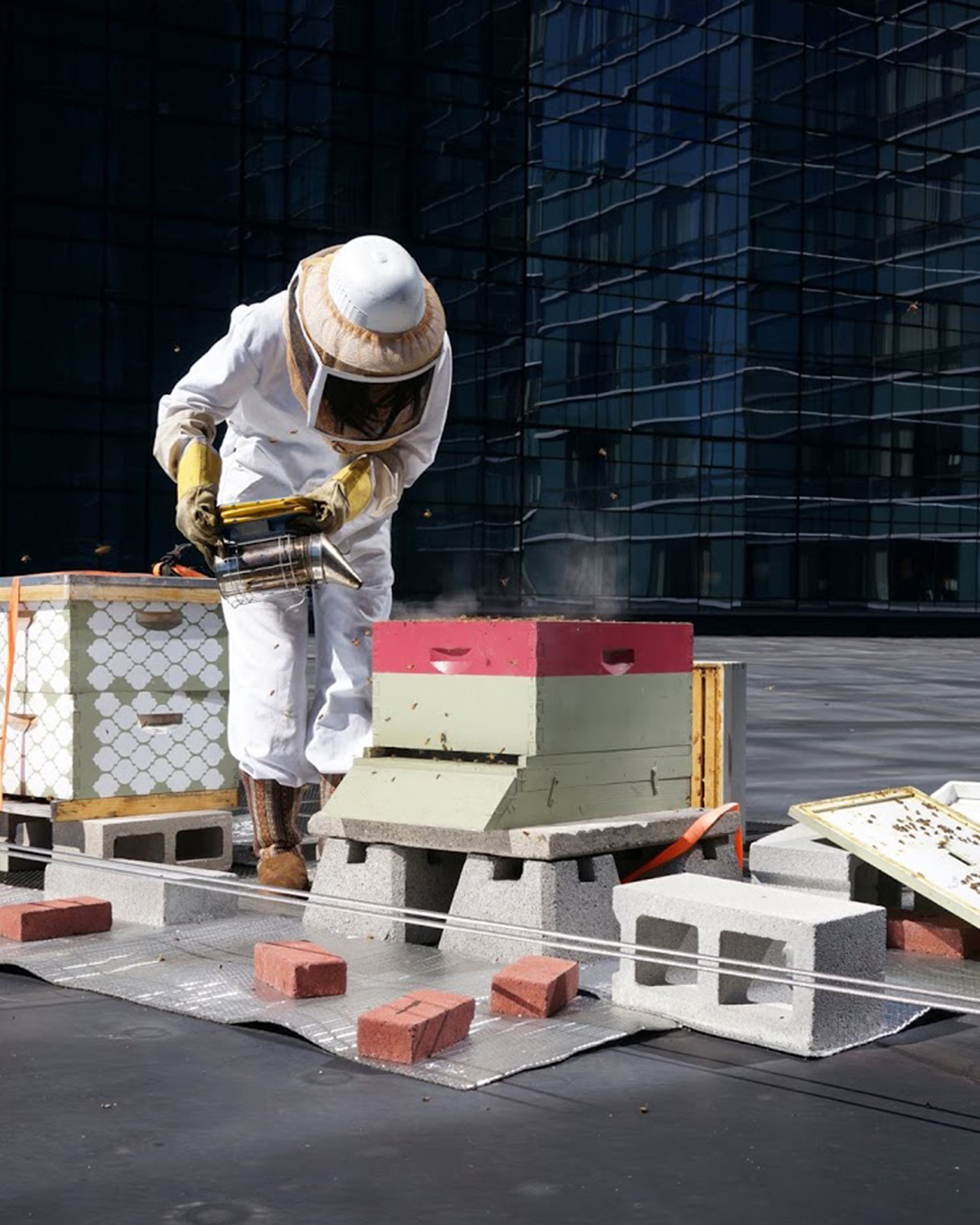 Catherine Bruce uses a bee smoker, a device to calm honey bees, to aid in opening the beehive to observe it. / Courtesy Photo

But every year Bruce says she learns something new and plans to keep on trying. “I love a challenge, and I think I will keep it up,” she says. “There’s nothing like a nice warm day being up on that roof hanging out with the bees, looking at each frame.” Her goal is to have a hive survive the Boston winter.

Randi Eckel, owner of Toadshade Wildflower Farm, a mail order nursery featuring native plants and seeds, explains that honeybees are native to Italy, not the United States. As a result, they get confused by the climate they’re in.

“If the weather is nice, they’re easily fooled and will fly out of the hive in search of nectar and pollen,” she says. Beekeepers need to make sure there are sources of pollen and nectar blooming as late as possible in the fall, “or the bees will have a difficult time and beekeepers will have to supplement their food.”

While bees can use hundreds of plants for pollen and nectar, Eckel recommends beekeepers keep yellow and blue flowers, attractive to honeybees. Asters are a good option to help bees through winter, as well as goldenrod, which flower until September and November, respectively. Skunk cabbage blooms early in the spring, in late February.

“The bud of the flower produces a lot of heat, so it will melt the snow so the flower can open up,” Eckel says. “Honeybees fly out and get trapped outside during the winter, and they will go into this plant and warm up before they fly back to their hive.”

Eckel explains that it’s hard to tell what effect climate change will have on bees and the plants necessary for their survival. When snow and frost happen sporadically, it affects how plants flower. “This will be a problem for creatures that rely on their seeds, pollen, and nectar,” Eckel says.

Despite these challenges, residents seem more open-minded to starting beekeeping. Sarah Herlihy, Kolchinsky’s Bay Village neighbor, says she is looking into getting bees.

“The bees have caused no problems whatsoever. They’re a good thing for the environment,” she says. “My husband and I are building a deck, and we’re probably going to put some bees on there.”