But the guild wants changes.

Longtime Boston Herald publisher Pat Purcell on Wednesday issued a memo addressing the internal brouhaha over the newspaper’s social media policy. Purcell wrote that he stands “100 percent” behind the policy, which he described as “neither overly restrictive nor unreasonably cumbersome.”

The memo follows yesterday’s news that members of the editorial guild are boycotting Twitter after reporter Chris Villani was suspended for three days without pay after tweeting out a scoop about Aaron Hernandez’s suicide notes without approval from his editor.

Purcell’s memo echoed sentiments expressed by Herald editor Joe Sciacca that the policy is key to maintaining credibility as a reliable news source. “The rapid-fire technology which social media platforms offer can be a great asset to the reach and power of our journalism but it may be a pitfall to those who use it recklessly” Purcell wrote. “It is crucial that we get it right—every time—and that requires proper vetting and careful consideration by editors and managers of content posted by our employees.”

“The issue here is less about accuracy and more about publishers being frustrated that the place where news gets broken is often a technology company,” Benton says. “That is an understandable frustration. But it doesn’t strike me that suspending a journalist for doing good journalism is the best way to deal with that frustration.”

Benton adds that while it is reasonable to have a policy that calls for news to be broken on the company’s website, the company “better make it really easy for reporters to get information up on the web quickly. A lot of newspapers have antiquated workflows, editing staffs that aren’t staffed at the right time, and a variety of things that get in the way. ”

In response to Purcell’s memo, the guild said it agrees with the need for a policy but that the current letter of the law is too restrictive and that it hopes to discuss updating the policy with Purcell.

Here is the guild’s full response to Purcell’s memo:

“Guild members are grateful to Pat Purcell for keeping the Boston Herald alive and thriving during a difficult time for the newspaper industry. We respect his leadership and his decades of experience.

No one is more concerned with matters of reputation and accuracy than his Guild employees. After all, our names go on the stories; our reputations are on the line if any of the information is wrong. The same holds true for our social media accounts, where our names, pictures, and occupations accompany every single post. We are well aware that if we were to use social media recklessly, we would lose the trust both of sources who help us do our jobs as well as our readers.

We agree with Pat that there is a need for a policy, but we have deep reservations about certain aspects that Herald Media Inc. has incorporated into its policy. In our view, the response our members have expressed about this recent enforcement is an opportunity to open the door to discuss making changes.

We remain committed to providing Boston Herald readers with the best quality journalism in the city and look forward to speaking with him.“

Here is the full memo from Purcell: 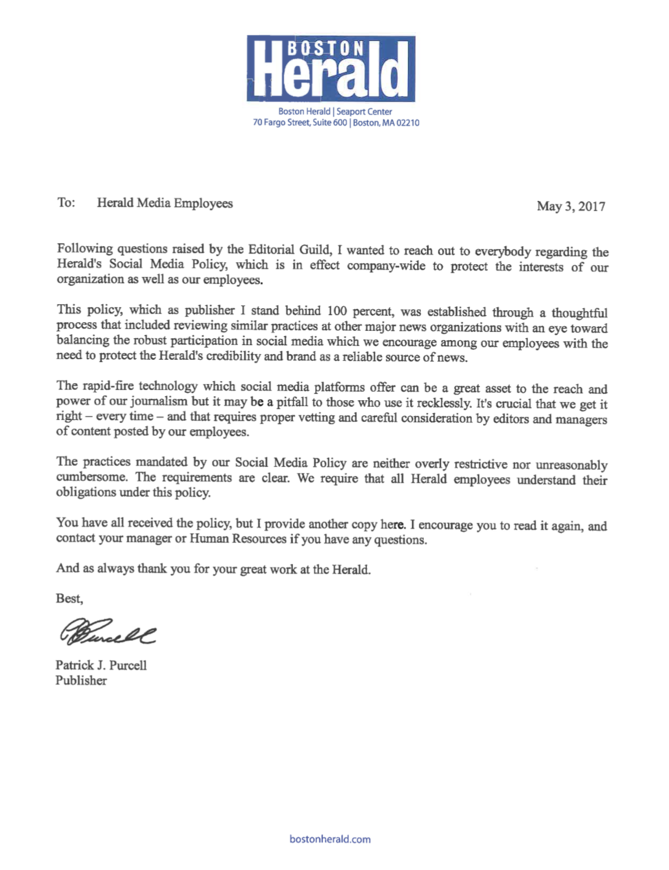