The Future of Boston Harbor Cruises

Alison Nolan has big plans for Boston's waterfront. (So long as lawsuits, competitors, and city planners don't sink her, that is.) 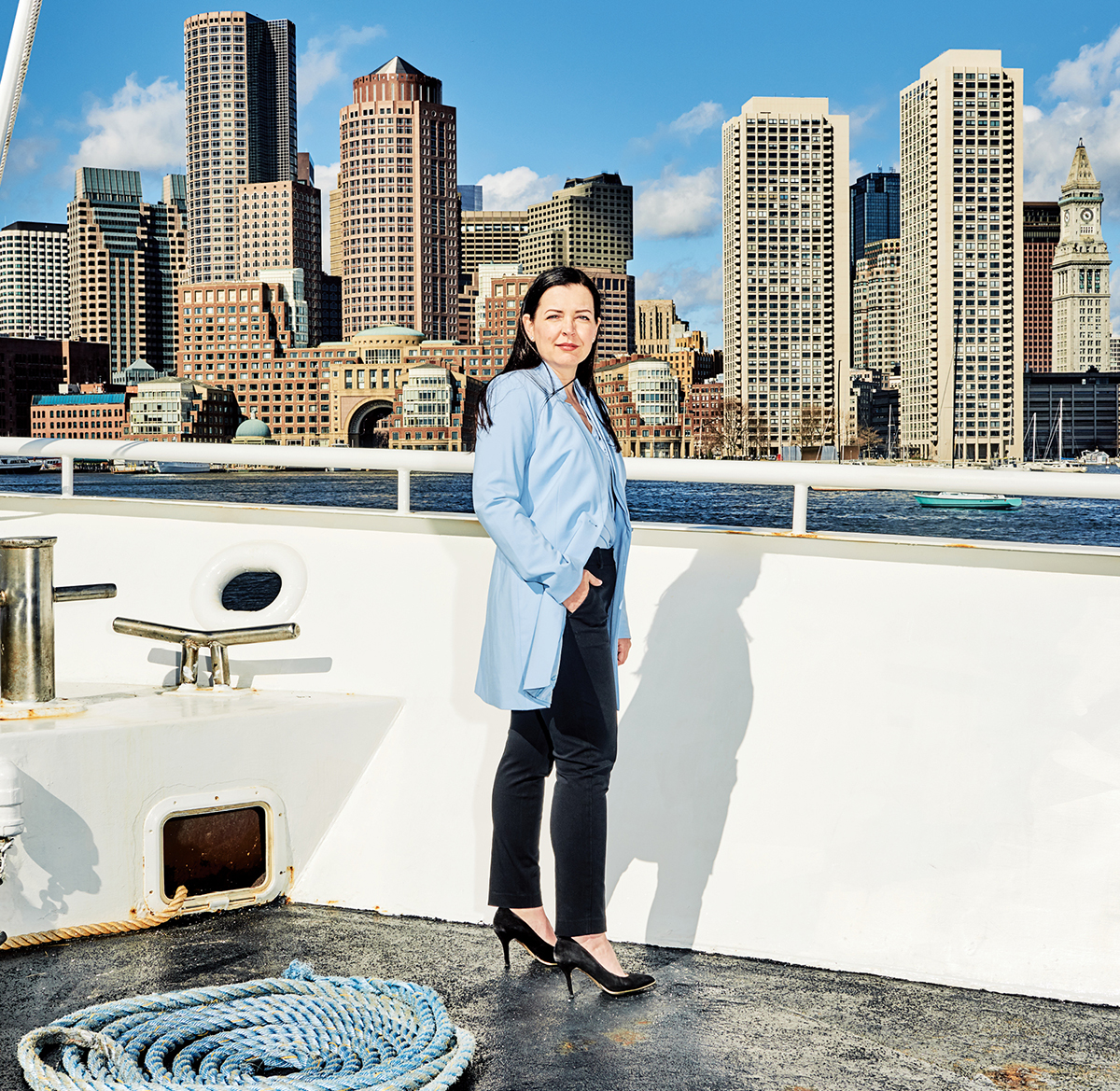 On a frigid morning in March, Alison Nolan leads me down a dock near Long Wharf, her black ballet flats clacking against the wood, to a gently bobbing water taxi she’s arranged for us. It’s just after 11 o’clock, and there’s not much activity on the water. A biting wind whips my hair in front of my face and I must look cold, because Nolan assures me that the boat, shielded by clear plastic windows, is heated. She wraps a pink scarf around her neck, pausing to untuck her long black hair from it, and slips onto the boat with the ease of an old salt. Then, she offers her manicured hand to help me aboard.

Clad in a black Burberry trench coat, Nolan looks more like a creature of the Financial District than the scion of a long line of seafaring Bostonians—maybe because, improbably, she’s both. As the fourth-generation principal and general manager of Boston Harbor Cruises, she has transformed her family’s formerly seasonal business into not just the heart but the lifeblood, arteries, and veins of Boston’s revitalized waterfront, putting it, and her, smack in the middle of the city’s most dramatic economic transformation. With bright-blue eyes and a collected—if stiff—affect, the 41-year-old is the most influential figure on the waterfront—and yet you’ve probably never heard of her.

In the 11 years since she took over, Boston Harbor Cruises has built the single largest passenger fleet in the nation—58 vessels worth just under $50 million in fair market value—and forged partnerships with almost every stakeholder in the harbor. It’s the sole provider of MBTA boats, Harbor Islands transportation, and whale watches in Boston. It also runs sightseeing cruises, a Provincetown fast ferry, charter boats, water taxis, and a 70-foot, jet-powered speed monster called Codzilla that rips around the harbor all summer long, leaving behind a wake that is the bane of virtually anyone nearby on the open water. If you’ve ventured out on any excursion in the harbor, chances are you’ve set foot on one of Nolan’s boats.

Now, she’s going to show me the future.

This morning she’s walked over from her temporary digs in Millennium Tower (she’s cooling her heels in an ultra-luxe apartment while waiting for her condo in the Seaport to be finished) to trace a vision of a new ferry route connecting North Station to the South Boston waterfront. Outlined in Imagine Boston 2030, the city’s first general development plan in more than 50 years, the route would be not just another conquest for Nolan’s armada, but a link that many people believe could change the waterfront, the suburbs, and the city itself.

A pilot program, which could embark on a test run later this summer, may offer a 149-passenger boat from North Station to the Seaport every 15 minutes during rush hour. And Nolan is gunning to make sure her company is running it.

As we putt east toward Logan Airport, the boat is as toasty as Nolan promised, though the air blasting from the heaters heightens the engine’s stink. Raising her voice over the hum of the motors, she starts to pitch me on her vision. There used to be a robust ferry system in the harbor, she explains. From the early 1800s through the mid-1900s, boats like the East Boston Penny Ferry toted passengers, horses, carriages, and dry goods to and from downtown and East Boston. When the city carved out the Sumner Tunnel in 1934 and erected what eventually became the Tobin Bridge in 1950, the new connectors scuttled demand for the boats. The last penny ferry ran in 1952. But now, Nolan argues, the city has outgrown these roadways. The new North Station ferry line—or even better, a network that reaches to East Boston—could cut down on traffic and become a vital conduit to the booming Seaport.

It’s a fine story, but not everyone is buying it. Former Governor Michael Dukakis is skeptical of the service, calling it “irrelevant” and arguing instead for the long-proposed North–South rail link. “You’re not gonna solve the serious congestion and transportation problems in eastern Massachusetts with a boat, for God’s sake,” he told me. Plus, past attempts at innovating with ferries have run aground. Commuter boats from both Lynn and Winthrop didn’t make it past their test runs. Although they drummed up enough demand, they lacked the funding to continue operating under Boston Harbor Cruises. (Winthrop has since debuted its own town ferry service.)

Even if the new ferry route is as good an idea as Nolan says, there are treacherous waters ahead for her and her company. For starters, the contract for a new ferry line isn’t a sure bet. The final decision on who will operate it, if the route is a go, will come in June. If Nolan doesn’t land it, a competitor would gain a vital foothold in the harbor, but if she does, any success could entice fiercer competition—maybe even from out of state—for the next round of expansion. Then there are the company’s legal problems. Codzilla is in the jaws of two serious lawsuits from passengers who claim that the 2,800-horsepower monster fractured their spines. And finally, a series of public mishaps last year has made Nolan’s fast-growing company fodder for the local news, including the time a wedding charter vessel ran aground on a sandbar, and another episode when one of the company’s ships rammed three other boats in the fleet while returning to Long Wharf.

Still, others would caution not to bet against Nolan. In this camp is Vivien Li, the intrepid former leader of the Boston Harbor Association and a guiding force in the cleanup and transformation of the waterfront. (The taxi I’m cruising in is named after Li.) Nolan “is definitely shaping what’s happening in Boston in terms of the renaissance of Boston Harbor,” Li says. “She is the face of the future of our city.” If that’s a title Nolan wants, though, she’s going to have to fight for it.

Boston Harbor Cruises was founded in 1926, with a single boat rented by a West Ender named Matty Hughes, Nolan’s great-grandfather. He offered sightseeing cruises along the Charles, coaxing his neighbors off the sweltering stoops of their apartment buildings for a cool trip up the river. The boat rides, which cost 10 cents, were a welcome treat on a hot day, even though the waters reeked of sewage and trash. Somehow, the filth didn’t stop Hughes’s new business from growing. He expanded his fleet and set up shop on India Wharf in the 1940s, adding tours to an even less desirable spot—the sludge-filled depths of Boston Harbor. If customers could brave the stench, they’d kick back while chugging past scenic landfills, including the one that used to be on Spectacle Island. Rick Nolan, Alison’s father, remembers that when gases from the massive trash pile ignited, as they often did, he’d think, “There goes another one!”

In the late ’60s, Hughes suffered what he thought was a huge blow to the business. In order to begin construction on a hulking pair of Brutalist condo buildings called the Harbor Towers, their landlord banished Boston Harbor Cruises to the bleak, industrial docks of Long Wharf. “We were brokenhearted,” Rick says. “But it was the best thing that ever happened.” After the move, the once unlikely spot for a burgeoning business experienced a flurry of activity. The New England Aquarium settled in across the wharf in 1969. Then, the crumbling buildings that made up Quincy Market and Faneuil Hall were overhauled in an urban renewal project during the 1970s, and locals and tourists alike flooded in. Suddenly, Boston Harbor Cruises found itself in the center of the action.

Still, Alison’s childhood typified Boston’s hardscrabble waterfront before the harbor cleanup: When she was born, in 1975, the family lived in Medford and the company was seasonal and struggling. During summers, Rick worked long hours to make the most of the boom months, and in the winter he’d head to Florida to resurrect aging boats that his grandfather bought for the business. By the time Alison was 11, the work had taken a toll on his marriage to Alison’s mother, Debbie, and they divorced. Soon after, Alison started putting in hours on the wharf, sweeping up trash, manning the ticket booth with her grandmother, even combing through encyclopedias at the Melrose Public Library to write scripts for the whale watches.