The Absolutely Fabulous, Likable, Shareable, and Altogether Baffling World of the Hess Twins

(And their number one fan, Bill Belichick.) 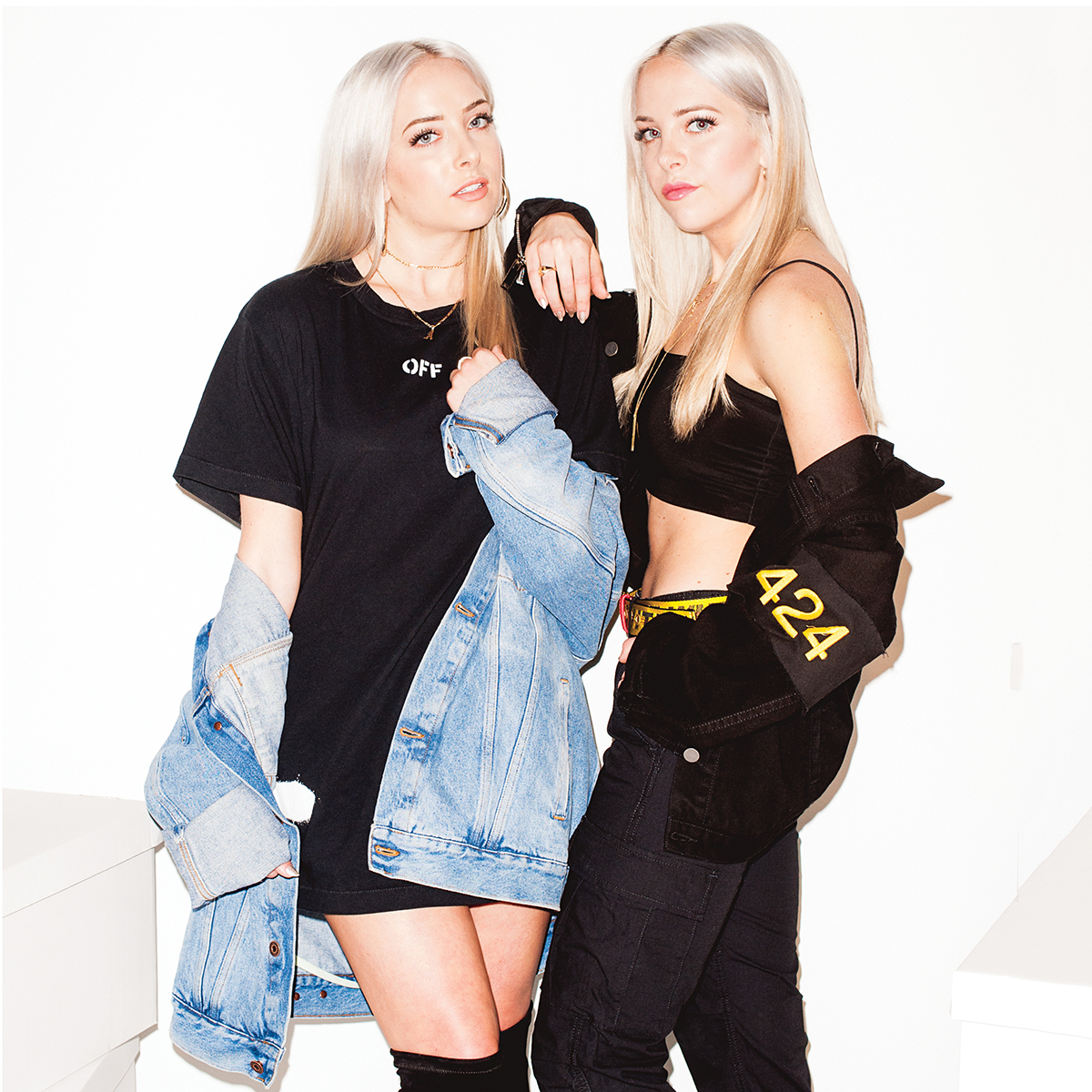 Next, the girls pose on the sidewalk in front of Asian Garden wearing heavy makeup and heavy scowls, which contradicts their more or less open, cheery, and slightly sardonic IRL personalities. “Give me, like, you’re doing something you’re not supposed to be doing!” yells the photographer, a MassArt fashion design student named Michael Tornato. As a small crowd begins to gather, a man shuffles up to ask if the girls are models, then shouts, “You’re beautiful!” before they can answer. They turn to the side, cock their heads, and point with long, almond-shaped, glittery painted fingernails. They do not smile. When they strike a pose that works, Tornato offers praise: “I like those vibes!”

Over the next three or four hours the twins will shoot a total of six outfits, disappearing into their white Audi SUV, parked in a nearby outdoor lot, between takes to change. The photo shoot is mutually beneficial: Kat and Ashley get to borrow merchandise by some of their favorite designers and can use the resulting photos for their streetwear-inspired style Instagram @thehesstwins; Riccardi, meanwhile, gets its latest looks photographed on attractive people without having to pay professional models. Each will tag the other in social media posts, with the shared goal of picking up a few new followers.

This is the 9 to 5 of an Instagram influencer, that very millennial—and potentially very lucrative—career path in which success is measured in followers and likes. Maintaining and growing their social platforms has been Kat and Ashley’s full-time job since August 2015, the summer after they graduated from Hartford’s Trinity College with degrees in American Studies. Their Instagram feed is a beautiful, careful mash-up of the girls, depicted together and separately. Though nearly identical, the twins very rarely identify themselves in photos, the two melding into one as they pose around town in denim, oversize coats, high-tops, hoodies, and crop tops (lots of crop tops). They ’gram while splayed out on concrete stairways, wearing leather and cutoffs. They ’gram while working out at Equinox and when drinking Jugos juice, both of which they do often because they’re contractually obligated. And they ’gram from the sidelines at Gillette Stadium, where they watch every Patriots game from a private box belonging to their mother’s longtime partner, Patriots head coach Bill Belichick.

That’s right, for the past 10 years, the Hoodie’s been raising a couple of fashion bloggers. 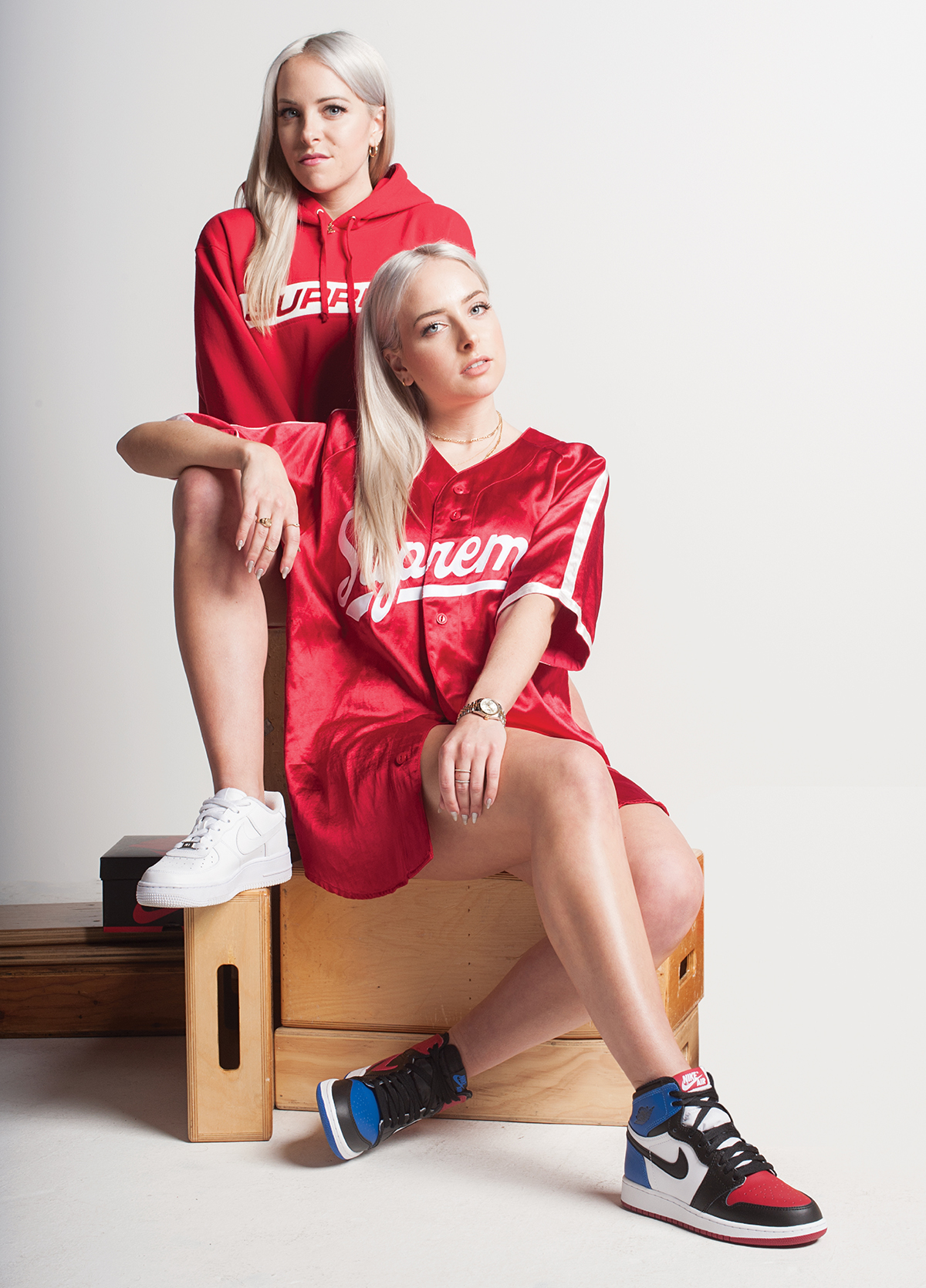 This unlikely connection is a good part of what makes the Hess twins, as a brand, so compelling—and they know it, even as they try to distance themselves from their mom’s famous boyfriend. (Bill and their mother, Linda Holliday, help support them financially as they build the business.) The few national press hits they’ve landed—including being named among the 15 most stylish twins on Instagram by the Huffington Post—have delighted in pointing out both the celebrity factor and the total incongruity of this familial relationship. As far as stylish Bostonians go, Belichick is famously, maybe even proudly, near the bottom of the list. He’s also proudly anti–social media. (“I’m not on SnapFace and all that, so I don’t really get those,” he’s said.)

For a while, the twins used his name in pitches to media outlets. The result, though, was a snarky story in Women’s Wear Daily last year in which executive editor Bridget Foley wondered how it was that “Bill Belichick is allowing fashion bloggers…to invoke his name and his romantic relationship for marketing purposes?” Since then, Kat and Ashley have backed off from using Belichick’s name as a sales tool—the Hess Twins is all about them, after all—though it’s not something they hide. That would be inauthentic (and a social media darling is nothing if she’s not authentic). Also pretty silly. In the Instagram economy, you take whatever edge you can get. Especially in Boston, where bloggers don’t command quite the same presence as they do in L.A. or New York, a city in which “celebrity” influencers such as Man Repeller’s Leandra Medine and Song of Style’s Aimee Song sit in the front row at Fashion Week and land lucrative book deals.

And so edge is what they’re after, which is why with two years of full-time blogging and influencer marketing tucked under their designer-label chain belts, Kat and Ashley are rebranding—dressing bolder and doubling down on their twinness—in hopes of becoming among the first Boston Instagram style influencers to get widespread recognition and, in the process, perhaps even move the needle in how people think about our city’s style. In the early days of their blog, Ashley and Kat were blondes who blogged about pencil skirts and Instagrammed from the beaches of Nantucket—just like nearly every other fashion blogger in Boston. Now, Kat says, “One hundred percent of the time, I will choose pants over a dress.” The new Hess twins are, in the words of one of their recent captions, “less cute, more fly.” And very authentic: Anything they feature has to be something they’d actually wear or do, and they insist the shift is less an effort to present themselves differently than it is an acceptance of their true selves, which is sneakerheads since college and football-playing tomboys before that. “We hate sellouts,” Kat says, “like girls who [post about] the detox teas and stuff that you know they’re not using.”

“Or, like, body scrubs that you know they’re not using every day,” Ashley says.

With straight, blond hair bleached nearly white, dark eyebrows in perfect arches, and regularly exposed midriffs, the twins would be hard to miss anywhere, but they are especially so in Boston—known for its unwavering devotion to rumpled anti-fashion. Their photo captions are short and clever, but not too clever: “Caught lyin’” written beneath a photo of Kat strewn on some stairs; “Blue jean baby” beneath a shot of Ashley posing on a roof in an acid-washed jacket. This is what makes their Instagram posts so effective. They stand out among the glut of content, their very un-Boston-ness as much a marketing strategy as it is a true expression of style.

Here’s the thing: It could very well work. Yes, there’s increasing demand for women to showcase streetwear, with websites such as Hypebae dedicated to the female sneakerhead. More important, though, Kat and Ashley have found in Boston a mutual need: In an otherwise innovative city desperate for style icons, the two fashion-savvy millennials have the brains, the beauty, and the Belichick backing to help prove to the world that we’re not the sartorial sewer we’re made out to be. And while it may seem unconventional or unexpected to peddle flashy sneakers and bare midriffs in a conservative town like ours with a goal of becoming the hippest style influencers around, if there’s any trend that sports-obsessed Bostonians are likely to buy into, it’s the one in which the hoodie is a staple.