Boston is the new ground zero for this retail war. So far, though, the only sure winner is you. 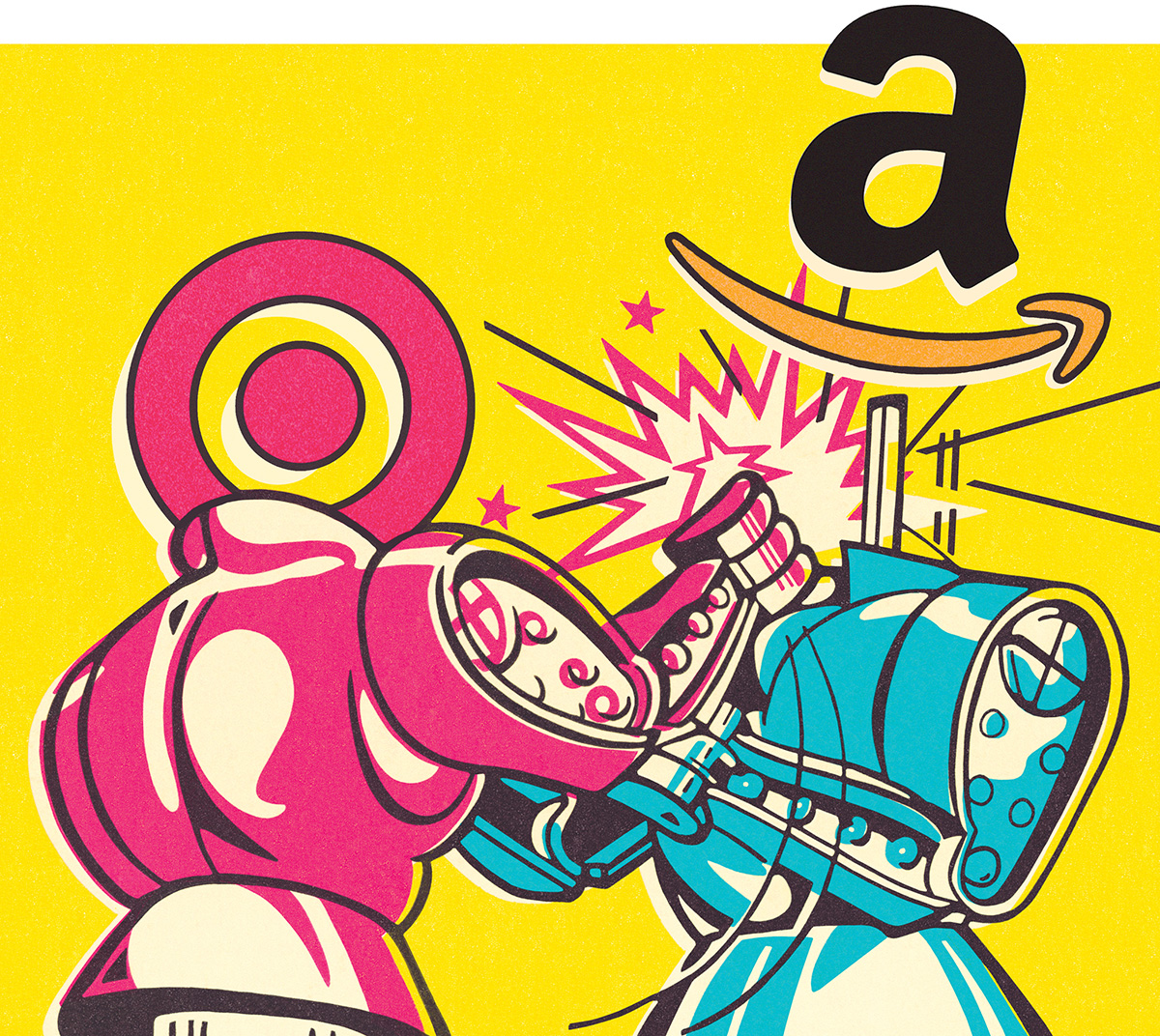 It didn’t take more than a few minutes of wandering around the sparkling new Target store in Central Square for it to dawn on me: Somehow, contained in this 21,000-square-foot expanse, is everything that most people, on most days, could ever need. There’s trail mix, school binders, blazers, smartphones, basketballs, Star Wars toys, bedding, toilet paper, Beats by Dre headphones, and at least half a dozen passable button-down shirts. Given the current retail climate, it felt like a store engineered specifically to keep me from buying things on the Internet—an act of war, so to speak, against Target’s archrival, Amazon. Which, it turns out, is exactly the case.

Practically overnight, Boston has become one of the most important national battlegrounds as Amazon and Target vie for retail supremacy. This year, Amazon announced the local launch of its one-hour Prime delivery service, by way of a fulfillment center in the heart of Boston. Need diapers, a digital food thermometer, and a desk lamp before noon? Jump online, enter your order, and wait for your doorbell to ring. And Amazon’s onslaught doesn’t stop there: The city is speckled with the company’s storage lockers, the suburbs are home to some of Amazon’s first brick-and-mortar bookshops, and company executives are scouring Boston for larger office space. Rumor has it that Amazon has been toying with the idea of buying out BJ’s, the Westborough-based wholesaler, in a deal that would not only be a significant move for the company, but also a massive local real estate play.

For its part, Target is no less enamored of Boston, a so-called “priority area” to grow new stores and help the company shore up sales and its stock price—both of which are plummeting while Amazon’s numbers soar. As a result, the company is embracing cities and opening small-format stores like the ones in Central Square and on Boston University’s campus, hoping to make itself irresistible to college students, tech-savvy professionals, and youngish urbanites with money to spend. A Target spokesperson tells me that they are constantly scouting real estate in Boston and have plans to open a new location in Roslindale, which will be the fourth new Target to hit Boston within the past two years.

It is, to say the least, a risky bet for Target. Many once-prominent American retailers have become extinct, or, like JCPenney and Sears, are slowly getting stomped to death by Amazon’s on-demand delivery services. “We’ve never seen a period like this, where stores were in so much trouble,” says Harvard Business School historian Nancy Koehn. “Amazon has wreaked its havoc.”

Bruce Clark, a business professor at Northeastern University, has found that Amazon sells twice as much per employee as Target, and three times as much per square foot of space it owns. It’s also better at using data to probe our brains and gauge our preferences, and once we sign on to the $99-a-year Prime membership, it’s devilishly good at getting us hooked on its scary-fast deliveries for life. “Once you have a habit,” Clark says, “you need a reason to break it.”

Still, don’t expect Target to be bullied out of Boston. Nada Sanders, also a business professor at Northeastern, says Target is working on mastering the art of the “curated” store; her undergraduate students regularly gush about the one on Boylston Street. And bear in mind that Target’s not exactly run by a gang of Luddites, either. The company’s online sales are steadily growing, and there are plans to have urban locations pull double duty as delivery hubs by 2019, with apartment- and dorm-dwellers already able to pick up shipped goods in-store.

It’s possible the two retail titans will coexist peacefully in our city, each appealing to its own segment of Bostonians. Or perhaps Amazon’s ruthless expansion will continue to woo customers and turn Target’s storefronts into vacant Filene’s-esque craters. For now, we should be flattered that all this fighting is over us, and pleased that we’re reaping the benefits of faster deliveries, and convenient shopping. As long as both companies keep pouring money into Boston, we’ll all continue to win.