Can Linda Henry Save the Boston Globe?

She's on a mission to save Boston's hometown newspaper. Let's hope it works—for all our sakes. 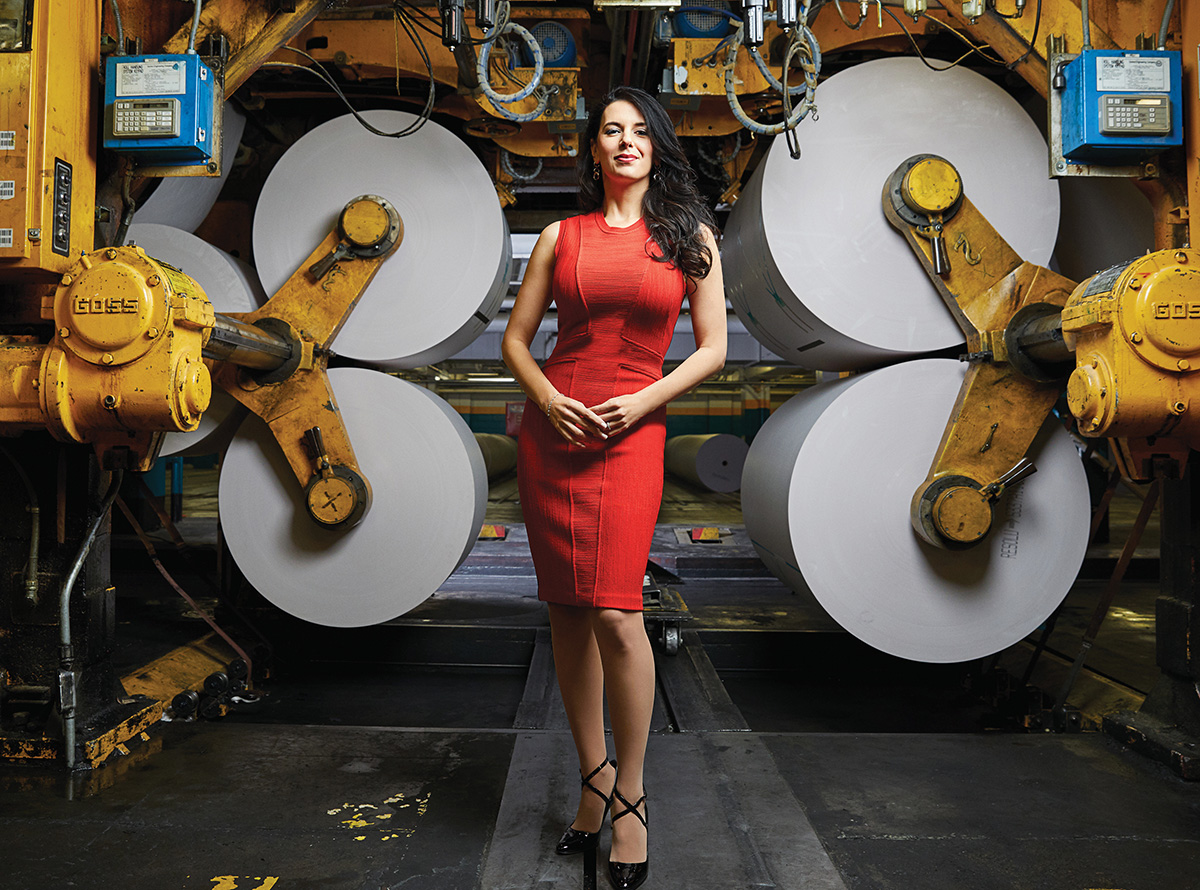 “I would say, fundamentally, I’m a producer,” says Linda Pizzuti Henry, pictured in the press room of the Globe’s Dorchester headquarters. / Portrait by Ken Richardson

In 2009, John and Linda married. Linda knew how it looked. She admitted to the realistic fear that she would outlive him, or that “society [would] disapprove,” as she put it in a 2009 article published in this magazine. But counterintuitively, the marriage represented a kind of liberation. Linda had always been acutely aware of the power—subtle or overt—the men in her life held over women. At Babson, the rare college that still enrolls more men than women, she had been so eager for female solidarity that she surprised herself and joined a sorority. Later on, in a concept cribbed from Facebook COO Sheryl Sandberg, Linda began hosting women-only “salons” at her home. (Her latest VIP guest: New York Times columnist Maureen Dowd.) So yes, from the outside, her decision to marry an older local celebrity of stratospheric wealth might have looked like a retreat from independence. But it also allowed her to break free of her own patriarchal family. Her sisters, by comparison, still live on the North Shore and still work for Pizzuti Development.

During the Red Sox season, the couple lived in a Back Bay condo. Winters were spent at John’s home in Boca Raton. Linda began producing television shows for NESN, and sat on the Red Sox real estate committee; outside the orbit of Fenway Park, she joined the board of startup accelerator MassChallenge and cofounded the Boston Public Market. She also had two children, a boy and a girl whose names and ages she prefers not to divulge. Meanwhile, John was busy behaving like, well, a mogul. In 2010, his Fenway Sports Group plunked down $476 million for the English soccer club Liverpool F.C. A year later, he tore down the 13,000-square-foot Brookline estate previously owned by former Los Angeles Dodgers owner Frank McCourt and replaced it with a flashy 36,000-square-foot upgrade. Then in 2013, the couple did something somewhat more surprising, prompting a full-time return to Boston. “We bought a newspaper,” Linda says.

From a blurry distance, Linda might seem more first lady than chief executive. At Fenway Park, her most visible legacies have been the creation of Tessie, sister to the mascot Wally, and Fenway Farms, a sustainable rooftop garden. At NESN, she’s developed lighter fare: a Cribs-style show about local athletes and an animated children’s series. Glamour notwithstanding, the Jackie O vibes are misleading. “She and John really work as a partnership,” says Emily Kumler Kaplan, a close friend of the couple. Before buying up sports teams, John made his money turning other peoples’ money into vastly more money. Linda, Kaplan points out, had hands-on experience in business development and real estate. A new dynamic was emerging. John tended to his core products while Linda worked to expand their reach.

A few years ago, says Sox president Sam Kennedy, Linda poked her head into the owner’s box. “She pulled me and [Sox EVP] Jonathan Gilula out of the suites,” Kennedy says, and proposed the idea of growing produce from scratch for the stadium’s use. “I remember looking at her and Jonathan, being like, ‘What are you talking about?’” Now Fenway Farms is funded by sponsors and, Kennedy says, is a hugely popular tourist attraction. Across the pond, it was Linda, not John, who helped run point on the construction of a new main stand at Anfield, Liverpool’s stadium. In order to get it done, says Werner, also the co-owner of Fenway Sports Group, “We had to acquire property from homeowners in the area. We needed to work with the Liverpool City Council. She was really my partner all along.”

Where Linda didn’t see any opportunity at all, though, was at the Boston Globe. In the summer of 2013, the New York Times Company put the Globe on the block. John had toyed with the idea of buying a newspaper before and, working with a group led by NESN, was ready to pounce. “John is utterly fascinated by the business model of journalism in America,” McGrory says. “It’s a Rubik’s Cube to him. He’s constantly turning the dial and trying to get all the colors the same.”

Linda was less enthused. “I did not think it was a good idea,” she tells me. “There were big industry problems. We didn’t see a model for success. We didn’t see a newspaper right away where we could just say, ‘Okay, we just need to do what that newspaper did.’” Between them, the couple was raising two children (John also has a daughter from a previous marriage), helming two sports franchises and a racing team, plus running their philanthropic efforts and ancillary businesses. Adding a flailing print-media outlet to the list seemed daft. Ultimately, the NESN bid fell apart, and the couple jetted to Nantucket for the weekend to regroup. By Sunday, though, John began second-guessing himself. “John was moping around like a kid who had lost his baseball glove or something,” McGrory says. “And Linda said to him, ‘If you’re going to be like this, just go put a bid in and buy it.’”

In August 2013, the Henrys agreed to purchase the Globe on their own for the bargain price of $70 million (compared with the $1.1 billion the Times company paid for it in 1993). In October, when the deal was finalized, John announced his acquisition with an unusually verbose, 3,000-word treatise on why he’d done it. “This investment isn’t about profit at all,” he wrote. But he also signaled he wouldn’t treat it as a charity. The ultimate goal was to get the paper to financial sustainability, so billionaires like him wouldn’t have to come to the rescue.

Meanwhile, Linda’s role remained something of a mystery. “People knew less about her and probably did not give her the benefit of the doubt at the beginning,” says Janice Page, a features editor who runs the paper’s book publishing division. “There were probably a lot of people who felt she would play a role on the Globe Foundation. Maybe she’d be part of the social presence and fundraising effort.” In the Globe newsroom, Linda’s glamour only contributed to the stereotyping. “Suddenly she appeared on the masthead, and everybody was wondering what she was going to do,” says a former senior newsroom figure. “She was this character. She looks like a model, in her high heels. She was the only one who dressed like that in the whole building. She’s the only person in Boston who looks like that.”

Linda was aware of her tendency, intentional or not, to dominate a room. So at first, she hung back: “I didn’t want to disrupt or insert myself too much into what was going on. I wanted to learn.” Writers abhor a vacuum. Imaginations ran wild. One former Boston.com staffer recalls her as the “Jared Kushner of the Globe”—young, smart, and dubiously qualified. Another went with “Darth Vader right before A New Hope.” Translation: “She’s the emperor’s right-hand man, without actually running anything directly. Her power, partly, is that nobody actually knows what she’s supposed to be doing.”

It didn’t take long, though, for John’s other businesses to draw his attention from the newspaper. “He would be away from the office for weeks at a time,” says a former Globie. “So a lot of the decision-making was, who could get in his ear during the 10 minutes that he was at the Globe?” Then there’s Linda, who sits alertly in editorial board meetings, typing notes on her laptop. “She’s much more grounded. She studies up,” the former staffer says. When I asked Werner to name the biggest difference between John and Linda, he said, “She’s probably slightly more patient than John.” Quietly, Linda was making her mark, working closely on a number of other business-side initiatives. “She’s here early, she’s here through the day, she roams the building, she participates in all significant meetings,” McGrory says. “She doesn’t dabble. And people in an inherently skeptical organization were really won over.”