Scene of the Crime

How an unsolved murder in Lynnfield sparked a war over Airbnb. 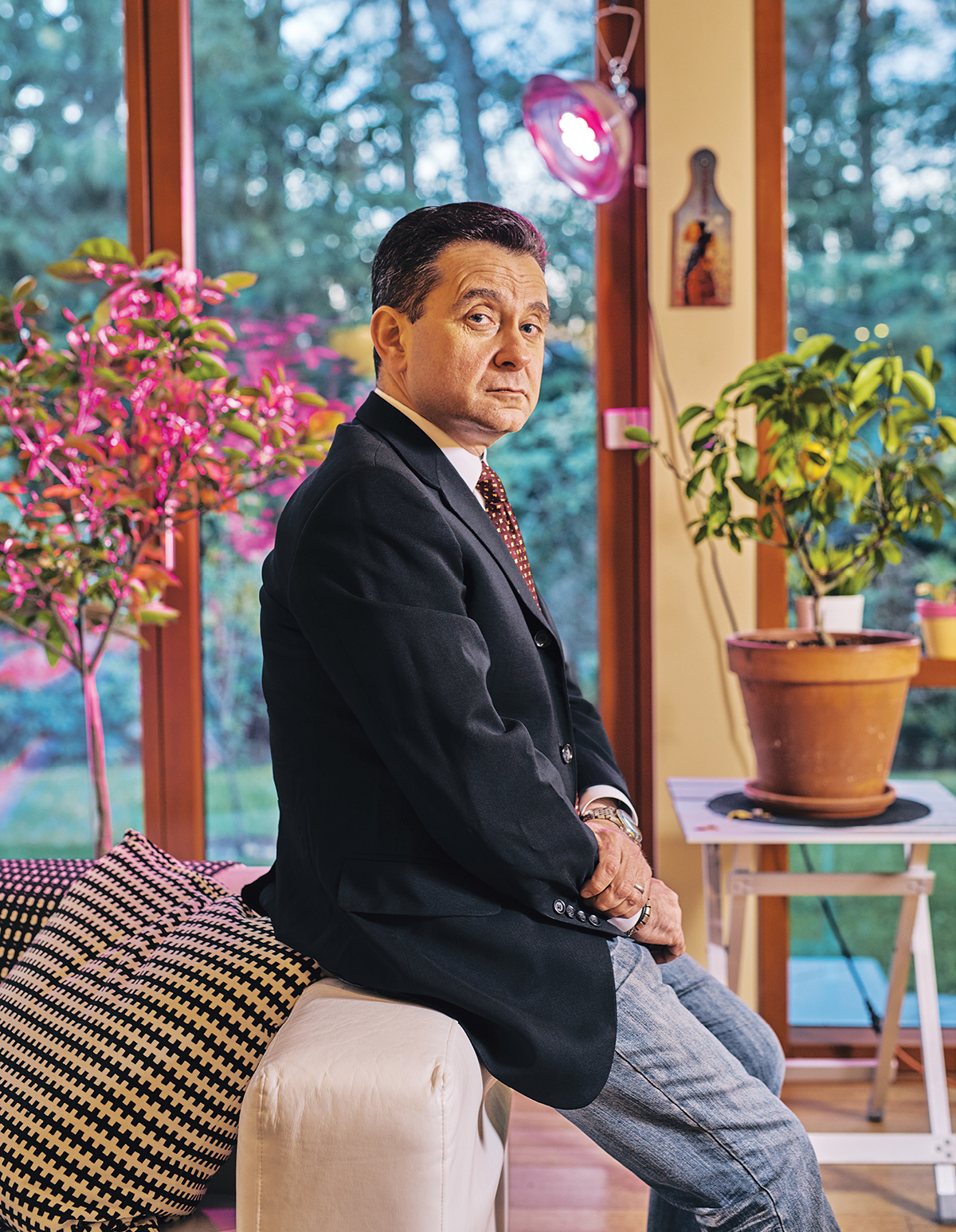 On a recent evening, Styller invites me inside his home to tell me his version of events. We sit in the kitchen, just under where an errant bullet had pierced the ceiling the night of the party. To my right, in the living room, an orange tree and a lemon tree grow under a UV lamp. Styller, who is short and slim with dark hair and light-blue eyes, pours hearty glasses of 15-year-old Glenlivet for each of us and offers up a platter of lemon wedges and goat cheese. “Me and my wife,” he assures me, “are big foodies.”

Styller, who advertises on several property websites, had rented his house through HomeAway to a man from Bristol County who wanted to host a small college reunion party (Styller declined to provide the renter’s name or contact information). Over the course of three months, he says, they exchanged emails and talked on the phone. Styller scanned the man’s LinkedIn page. Satisfied with his cursory background check, he agreed to rent his home for the holiday weekend. On Friday night, he met the man at his house, gave a tour, and surrendered the keys. He also met the party’s cohosts. “Very nice, very polite, well-dressed black guys,” he tells me. Styller packed up his family and went to his parents’ home in nearby Woburn to spend the weekend.

At 8:30 a.m. that Sunday, Styller received a phone call from his real estate broker. It was unusually early and his broker wasted little time. “Alex,” she said, “I’m very sorry about what happened.”

Styller paused, dumbfounded. He had no idea what happened. The details were murky, the broker explained, but there had been a shooting at Styller’s home and somebody was injured. Styller got off the phone, scrambled into his white Mercedes SUV, and raced toward Lynnfield, where he found his driveway blocked by police vehicles. Standing across from a bank of news trucks, a detective told Styller that he couldn’t enter his home until cops cleared the scene. Styller returned to his parents’ house and flipped on the TV looking for updates on what had happened. “The entire day,” he tells me, “felt weird.”

A Russian accent hangs heavy over Styller’s words, a relic from his days in Moscow, where he grew up in a 400-square-foot apartment with his brother and parents. As the Soviet Union deteriorated, Styller left and made his way to Italy, where he spent 14 months as a refugee. He linked up with a group that helps Jewish migrants and made arrangements to move to the U.S. He attended free English classes at Hebrew College in Newton Centre and worked at a Copy Cop, where he polished his language skills on customers. In 1992, a Russian friend reached out with an opportunity to join a successful computer hardware business. In no time, Styller branched out and founded his own computer company.

A decade later, after grinding it out as a small-business owner, Styller and his wife wanted to move to the suburbs. With a child on the way, the couple wanted the life that all new parents hope for—a safe neighborhood, good schools, a yard. Lynnfield emerged as a “hidden gem,” Styller says. “Wonderful people. Wonderful residents. Fantastically positioned. Awesome schools. Couldn’t ask for more.” They bought a large private property, where they could design their dream home.

Life in Lynnfield was peaceful, but it was also expensive. Like many entrepreneurs, Styller felt the pinch of the recession and the steady climb in living costs. His business had faced its own challenges, including a 2015 federal lawsuit filed by Microsoft that alleged Styller’s company sold computer systems that contained pirated versions of Microsoft software. According to court records, Styller’s company settled the case with undisclosed terms. In Airbnb and HomeAway, Styller saw an easy and lucrative side income. “We all need money,” he tells me between sips of scotch. “Our children are supposed to go to college, we’re paying our mortgages, we’re buying the cars, we’re paying for the cars; we’re paying for everything.”

Styller began testing the short-term rental market roughly three years ago. He rents out his home only a handful of times each year, he says, and rejects approximately three-quarters of the people who express interest. He also conducts his own background checks. “That’s my home,” he tells me. “That’s where my daughter lives. That’s where I live. I have no plans to let people whom I don’t check, like questionable people, into my house.”

Most renters, he says, are affluent and professional. A Nigerian executive and the head of a large publicly traded company come to mind, he tells me, estimating that he rented out his home a total of five times in 2016. Not once, Styller says, did he hear complaints about his use of HomeAway and Airbnb from the neighbors, the building inspector, or police—until Memorial Day weekend.

While waiting for the police to wrap up their investigation that Sunday, Styller talked on the phone with the men who had rented the house. They apologized, Styller says, and told him the party simply got out of control. They didn’t know Keivan Heath or what had led to the shooting. Styller was ready to chalk it up to an unlikely mishap and move on, but the city had other ideas.

Two days after the shooting, Lynnfield’s building inspector drafted a four-paragraph cease-and-desist notice forbidding Styller to rent online. According to the letter, Styller’s use of Airbnb for a weekend here and there was the equivalent of operating a hotel or a “lodging or rooming house,” neither of which is permitted in the residential zone of Lynnfield. Styller seethed. “There is no justification,” he tells me. “Tragedy can happen, but let’s not get hysterical. Let’s not get panicky. Okay?”

It’s easy, of course, to take issue with the town’s reaction. Then again, if someone rented out the house next door and a murder took place, what would you do?

Lynnfield isn’t the type of town typically associated with Airbnb, a service that first made inroads in major cities such as San Francisco and New York. It’s a politically conservative suburb of 12,000 where the biggest attraction is a Whole Foods that anchors a high-end shopping center. Ninety-five percent of the city’s residents are white and the median home price is just shy of $600,000. To anyone who opposed Styller, the narrative was simple: In renting out his home, he’d allowed more than 100 partygoers, some of whom were apparently armed, to descend on their quiet little town. At a zoning-board hearing not long after the murder, Styller said he’d stop renting his property for parties and that he’d already updated his Airbnb ad to make that explicitly clear. He also expressed interest in working with the city to obtain a special permit so he could continue renting out his home on a case-by-case basis. He was not prepared for the backlash.

At the hearing, several residents told the zoning board they feared for their safety and that the town was forever changed as a result of what happened at Styller’s home. Then Richard Dalton, a longtime Lynnfield resident and a regional director in the Massachusetts Office of Business Development, took the floor. Dressed in a suit, with slicked-back silver hair, Dalton told the room that his daughter, son-in-law, and three grandchildren live one street over from Styller in a house that abuts the back of his property. “After the incident,” Dalton scowled, “those three children did not sleep in their own house for a week. They were afraid to be in their home, in their neighborhood.”

Dalton then launched a personal attack against Styller, telling the zoning board that if they were considering giving Styller a special permit to continue using Airbnb, they should first consider Styller’s moral character. He said: “When you look at him being sued by Microsoft for using pirated copies of software, when you look at—” Styller’s attorney jumped up and objected. Dalton, who declined to comment for this story, turned around, shrugged his shoulders, and emphatically declared that this case wasn’t merely about Styller—it was about “preserving the character of this town.”

At the next appeals meeting, a month later, neighbors again showed up to sling mud. This time they let fly allegations of nude sunbathing on Styller’s property and noise-ordinance violations. Styller brushed off the attacks and stayed focused on the issue at hand—whether his house was a hotel or a boarding home. The truth was that his use of Airbnb didn’t fit neatly into the letter of the town’s law. The home wasn’t a hotel, nor was it a lodging or rooming house. So what was it?