The Man Who Smashed Boston’s Holocaust Memorial Was Arrested

Roxbury's James Isaac, 21, allegedly threw a rock at the monument. 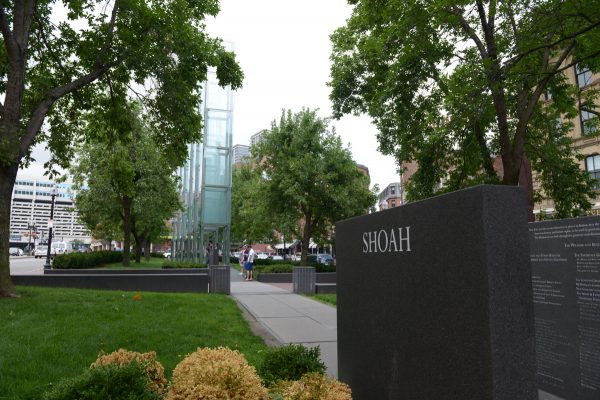 Boston officials and community leaders condemned an act of vandalism at the New England Holocaust Memorial in downtown Boston that left a portion of it smashed in pieces on a walkway.

“As a city we stand with the Jewish community. We stand side-by-side, shoulder-to-shoulder, to say we support you,” Boston Mayor Marty Walsh said at a gathering planned at the memorial, which police say was damaged when a man hurled a rock through one of the monument’s glass panels in the middle of the night.

Police arrested a 21-year-old Roxbury man, James Isaac, in connection with the crime. Isaac faces destruction of property and civil rights charges. He was ordered held on $750 bail Wednesday, Universal Hub reports, but due to a prior assault and battery charge he will remain behind bars. His attorney says Isaac has “a host of mental health issues,” according to the Globe.

Among those who attended the quickly organized gathering was Izzy Arbeiter, a Holocaust survivor who says the number tattooed on his arm was among those included on the shattered panel.

Izzy Arbeiter, a #Holocaust survivor, he learned about vandalism after wife came to him crying this AM. His number was on broken pane. #wbz pic.twitter.com/EiBmYLbHX8

The memorial is made up of six of glass towers etched with numbers assigned to victims in concentration camps and is a tribute to the millions of Jewish lives lost in the Holocaust. It was erected near Faneuil Hall in 1995 and is run by the National Park Service, the Combined Jewish Philanthropies, and the Jewish Community Relations Council.

Walsh says there are back-up panels for the monument, and the damaged one will be replaced soon.

The Anti-Defamation League of New England said on Twitter the “community is as shattered as this glass” after the incident.

Community is as shattered as this glass Holocaust Memorials are sacred ground, Grateful to @bostonpolice & witnesses resulting in arrest pic.twitter.com/Kb7DIrOekp

According to a website for the memorial, it was  “was built as a beacon of memory and hope, inviting all visitors to reflect on the impact of bigotry and to resolve to combat all forms of oppression.” It also “offers a unique opportunity for reflection on the meaning of oppression – and freedom – and on the importance of a society’s respect for human rights.”