Local Protesters Are Making Noise, Getting Arrested in D.C. Over the Health Bill

Hate Trumpcare? These activists say it's time to leave home and start yelling. 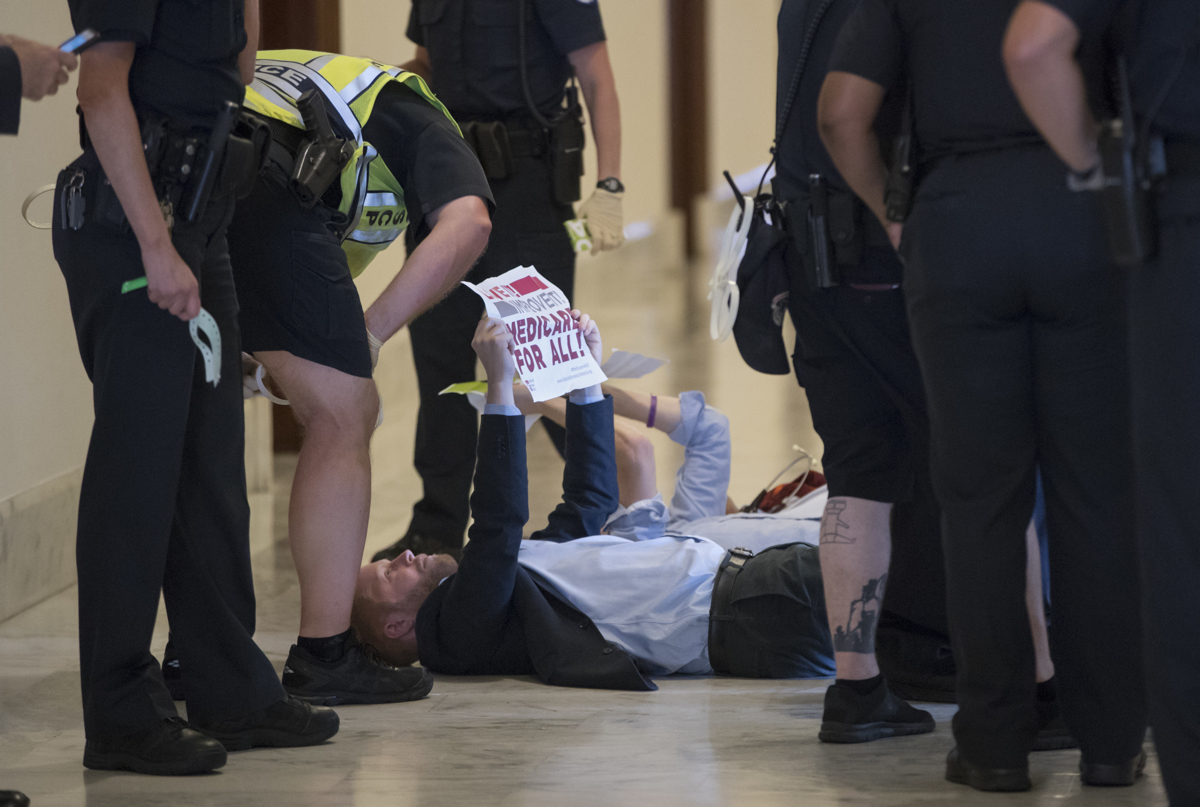 Congress is back in session, and a Republican healthcare repeal bill is once again in the pipeline. It’s austere, it’s sweeping, and it would cut millions in Medicaid dollars for Massachusetts and result in more than 20 million people nationwide losing their coverage. If that’s the kind of thing that makes you furious, but you live in a blue state where all your elected officials agree with you, what’s there to do?

If you ask Jon Shaffer, a 30-year-old Boston University PhD candidate and healthcare activist who has worked with the locally based nonprofit Partners in Health (PIH), it’s about time you headed south. Shaffer and a team of Massachusetts activists were among the swarm of protesters who descended on House and Senate offices on Monday to chant, wave signs, and, ultimately, to be led away in cuffs by the Capitol Police, on camera.

It was an act of civil disobedience, and local activists say it’s the best way for the angriest voices in Massachusetts to get their message across before it’s too late.

“I think at this moment, when the Republicans are trying to move this legislation through as quickly as possible and with as little public dialogue and public scrutiny as possible,” Shaffer says, “the only way to bring this into a serious public conversation is by … asserting our First Amendment right to be present and, you know, yell.”

Shaffer says he and seven others boarded a van to D.C. on Sunday, where they slept on a friend’s floor. Then on Monday, they teamed up with activists from around the country, split up in groups and spent the day hollering outside the offices of Republican Senators who support the bill but are vulnerable to re-election challenges at home, and those like Maine Sen. Susan Collins, who opposes the bill but, says Shaffer, could always use a little extra encouragement.

And, the health justice #caraVAN is off! 4/ pic.twitter.com/nkRVAThymc

“We called it an un-welcome back party,” he says. The Senators had just returned from a break for the July 4th holiday.

A photo captured by an Associated Press photographer shows Shaffer lying on his back outside the offices of Sens. Jeff Flake, of Arizona, and Ted Cruz, of Texas, as police stand over him. He’s holding up a sign that says “Medicare for all!”

Shortly after that, he says, he was arrested. “We were dragged out yelling and continuing our chants and then put into essentially a very, very hot and very, very small paddy wagon,” Shaffer says.

Wild scene here as protesters are forced out of Cruz's office by Capitol Police pic.twitter.com/OgoVIjFqMz

He was among the first dozen or so to be taken into custody, he says. In all, 80 were arrested.

It wasn’t all that bad, he stressed. None of the protesters were charged with a crime. They were instead given a citation and a $50 fine, and seven or so hours later, they were let go. He also says the police were respectful, and that he understands they were just doing their jobs.

But the optics of cops hauling away peaceful protesters in zip-ties (including many who had tales to share of chronic and costly health problems) are helpful in getting people to talk about the legislation, and how to kill it. “We were on every major news channel,” Shaffer says.

Protesters descend on Capitol Hill to voice opposition to health care bill: "If you cut Medicaid, you cut my life." https://t.co/3DFaOMiOqO pic.twitter.com/3rENrB7HJt

Joining him from Boston was 29-year-old Phil Garrity, who’s also affiliated with PIH and has written about his battle at 24 to overcome a rare bone cancer and his subsequent activism for expanded access to affordable care. He says were it not for the Obamacare provision that let him stay on his parents’ health plan until 26, he might not have been able to pay for his expensive treatment (that’s one of the Obamacare policies that’s so popular that even the draconian GOP Senate bill is expected to keep it in place).

In Washington, Garrity says he was moved by protesters with disabilities amassing in the Senate hallways, and that’s what motivated him to make himself vulnerable to arrest by defying police orders to disperse.

“When I saw people in wheelchairs, people who had come all the way from Arkansas, I just felt really compelled to participate in a more radical way,” he says. “I think it’s a powerful message that’s inspiring for a lot of people to maybe not take that step of getting arrested, but getting more involved and realizing there’s a tremendous amount of power we have.”

For anyone who’s afraid of angrily confronting Senators or running afoul of the law, he says, there’s no reason to be.

“This is a little scary, but it’s also exhilarating,” Garrity says. “There’s more to be afraid of in not doing anything.”

Want to cause some trouble of your own in our nation’s capital? Shaffer recommends those interested contact Health Care for All, MassCare, or Physicians for a National Health Program.