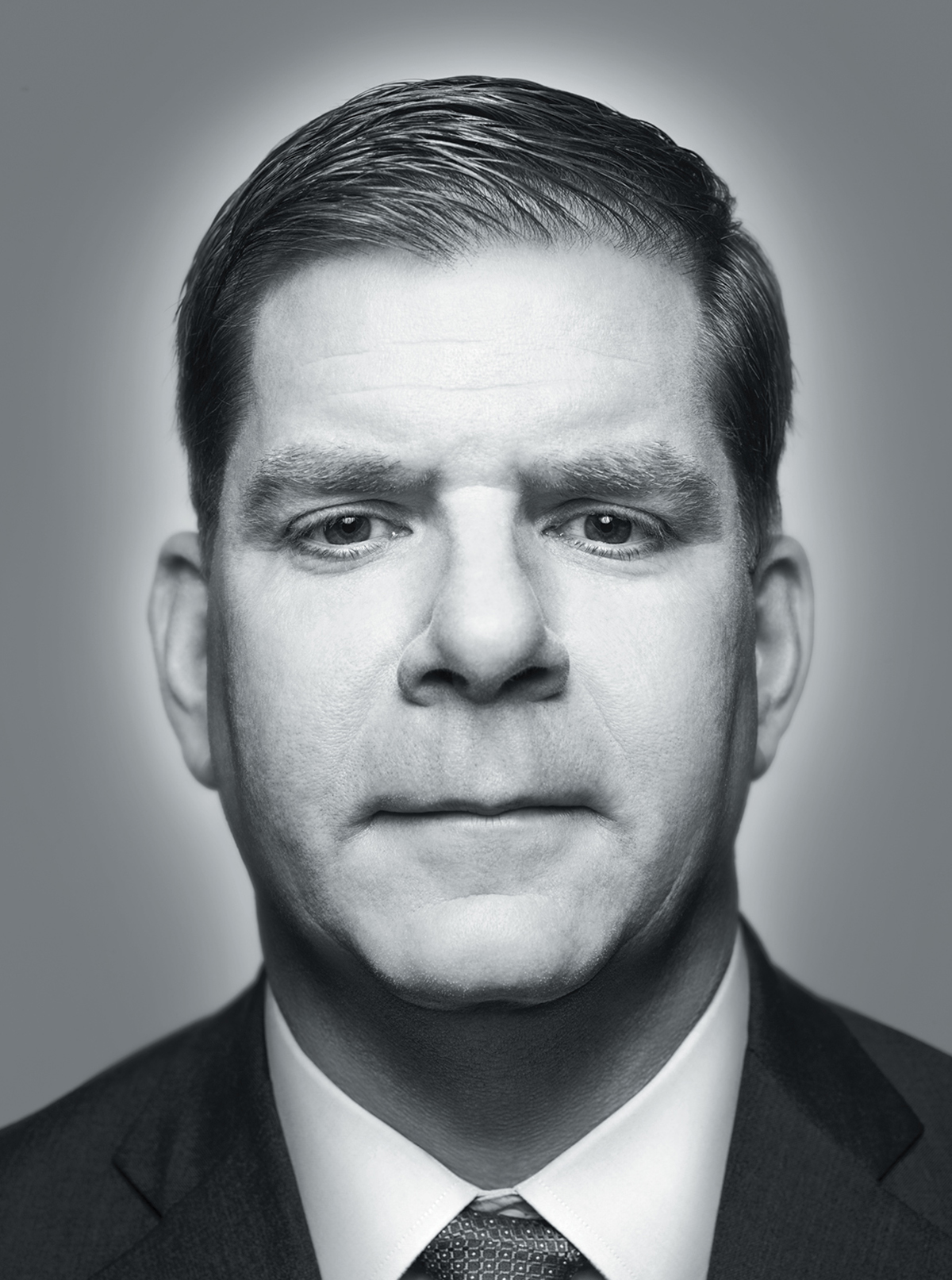 When I’m done as mayor,” Marty Walsh says as we sit inside his office, “I want the city to be better than I found it. And I found it in pretty good shape.” Walsh, dressed in a blue shirt and green tie, emerged four years ago as the first mayor of Boston in a quarter-century not named Menino. Now, as he seeks a second term, he appears to have a commanding lead over his lone challenger, City Councilor Tito Jackson. Looking back on his first term, Walsh sees plenty of lessons learned. But he’d rather focus on the future. “I want our [public] education system to be as strong as Boston’s higher education system,” he says. Still, to bring his vision to life, Walsh doesn’t just need to win. He needs to win big.

It’s been said that so long as the garbage is picked up, the streets are plowed, and the lights stay on, you can remain Boston’s mayor for life. Is it that simple?

No. I think back in the day that might have been the perception of what being the mayor was. It’s so much different today, with Boston being the economic engine for New England. It has changed the image of being mayor of this city. People are demanding more out of education today. People are demanding more out of housing today, particularly with the rise in the cost of rents and the short supply of housing. That’s why we launched a housing plan in 2014, to create 53,000 units of new housing. People expect Boston to be a safe zone and a safe city, and it is, but they are expecting more out of their mayor and their government than just simply taking the trash out and putting the lights on.

Is City Councilor Tito Jackson a serious contender for your seat?

That’s going to be up to the voters to decide if he’s serious or not. I know that I take my job seriously, and I have for more than 20 years. I ran for reelection in the state House of Representatives eight times. Three out of the eight I had opponents and challengers, and I took them seriously. Even when people said they didn’t know who some of the opponents were, I took everybody seriously because of the job that I have, the people that I serve—I owe it to them to work hard for this job.

Love it. I love the challenge of it. There are aspects of campaigning that I don’t care for. I don’t care for raising money and doing fundraisers, but you have to. It’s part of the business. I don’t necessarily care for debate prep because I just want to get to the real thing. But other than that, I love campaigning.

Throughout this year’s campaign, Jackson has asserted that you have fostered a development boom in Boston that has favored luxury condos and thus made the affordable-housing crisis worse. How do you respond?

A year and a half ago, we changed the Inclusionary Development Policy, and we’ve since raised $71.9 million that has gone into affordable housing since 2015. So we’re taking the Inclusionary Development money and we’re creating affordable housing for people who otherwise wouldn’t have it. We’ve been able to build record numbers of affordable housing in ’14, ’15, and ’16. I’m not sure where we are today in ’17, but we’ve been able to put thousands of units of low-income housing in the market, as well as moderate-income housing. And if we didn’t have a good economy, there’d be no interest in building that housing in the city.

Well, I think when you take away the very high-end earners in the city of Boston, you’re going to see the gap close. But this is not a Boston problem—it is an American problem. This goes back to Al Gore running for president in 2000 and talking about the top 99 percent and 1 percent of the country, and he talked about the [Medicare] lock box. This is an issue that hasn’t been dealt with at a national level. We have been talking about closing this wealth gap and dealing with the inequities of the rich and the poor for years.

So what can be done about that here?

What we have to do is continue to try to create wealth in our city by creating job opportunities and bringing in some manufacturing opportunities, much like Brooklyn, New York, has done. Look at some of these companies like General Electric and other folks moving into our city. What jobs can we get from these companies that can actually create wealth in the city of Boston? And what I mean by that is jobs that you don’t have to have a master’s degree to get. We have to do more, and we can do more with a high school diploma and some job training.

What’s one part of Boston’s economy that you think is underdeveloped?

What’s interesting about the Boston economy is that not a lot of sectors are underdeveloped. When Massachusetts has gone into an economic downturn, and there have been three or so since 1997, Boston fares okay because of the diversity of our work base and the companies that are here. It’s interesting how we have been able to focus on the technology sector, focus on the hospital sector, focus on the higher-education sector, and focus on the life-science sector, the insurance sector, and the banking sector. That diversity of business is important for long-term strength. When you look at a city like Detroit, all of their eggs were in the automotive basket.

Bringing GE here was a big milestone of your first term. If you could bring any other company in the world to Boston, which would it be?

Facebook. Here’s what I’ll say: If Facebook started here today, Boston doesn’t lose it to California. We understand the potential of these startups today and we’re not going to lose them to California. Look at Wayfair—they started here, they’re growing, and they’re not leaving.

If you could annex one of the following and fold it into Boston proper, which would you pick: Cambridge, Somerville, or Brookline?

Brookline, because of the taxes [laughs].

Let’s play a quick round of word association. What’s the first thing that comes to your mind when you hear Orange Line?

Sixth-largest company in the world.

Do you use Hulu, Netflix, or regular old cable?

Regular ol’ cable, baby. I watch a lot of sports and a lot of news. The only show that I’m faithful to every day is Seinfeld. I try to watch one Seinfeld every night.

How do you look back on the Olympics bid now?

If it happened now, I would go for it again. Let’s back up and think about this: I’m in my first term, in my first year. To some degree, I inherited the Olympics from Governor [Deval] Patrick and Mayor Tom Menino. People downplay Menino’s role in it, but if he didn’t want it to go as far as it did, it wouldn’t have. So we got involved in conversations about the Olympics. I don’t think any of us were ready for how if you get awarded the bid, the press is just ready to jump. If something like that were to happen today, or two or three years from now, we’d be better prepared for it. But at the end of the day, I don’t think we lost anything, and we actually came up with some ideas for how to develop Widett Circle and revitalizing Harambee Park that we’re looking at now. It was an interesting idea, and experience, and it didn’t cost us anything. At the end of the day, if nothing but Widett Circle comes out of it, that’s an economic boon down the road.

No, I think that social media makes it very easy to target something. I didn’t honestly hear negativity around IndyCar and the Olympics when I was out in the community. There were a lot of questions about the Olympics because it was such a big and daunting potential opportunity. So I think that was a little different. The IndyCar stuff, I heard very, very little pushback. When I was out in the community, no one was like, “Oh, don’t bring IndyCar in the neighborhood.”

So what, in your eyes, went wrong with IndyCar?

The operator. He was a disaster.

What is one specific day that stands out from your first term?

I’ll name two. One was the day of the Beacon Street fire. We were in this office, right here. I was in a meeting and I got a phone call that there was a four-alarm fire going on on Beacon Street. Then it was a five-alarm fire, and there were two firefighters trapped inside. I got in a car, flew down there. By the time I got there it was a nine-alarm fire. Michael Kennedy had been taken out by that point, but Lieutenant Edward Walsh hadn’t yet. That was a tough day. That was back in March of my first year in office.

What’s the other day?

The other day that was difficult was when I was at the DNC in Philadelphia and a little boy named Kyzr Willis died. He had drowned. He was missing, and Police Commissioner Evans called and told me that [Willis] had drowned. Those were two very difficult days as mayor. There are others, too, and they are out of your control to some degree. But it is still difficult because you feel, in part, responsible for their safety.

You and Governor Charlie Baker have been able to reach across the aisle to get things done. Do you get dismayed when you look at the hyper-partisanship in Washington, DC?

I’m sad with what’s going on with Washington. What bothers me is that when the Republicans voted to repeal the Affordable Care Act, Paul Ryan was smirking. I took that as an insult. You don’t smirk when you’re knocking 23 million people off healthcare because of your own selfishness. I think Democrats and Republicans need to start doing their job. Governor Baker and myself are not going to agree on a lot of things. When it comes to the MBTA and privatization, we’re just in two different worlds. But we also understand the important need for having a good rapid transit system. On the Question 2 ballot, he was for increasing the number of charter schools; I was not. We both agree that education is important, but on that particular issue we both had different ways of getting to it. Congress and the Senate need to take some pages out of their predecessors’ books and really think about how to move this country forward. What they’re doing to the country is a shame.

What’s something that you wished you had accomplished in your first term but couldn’t?

I wish we were further along on the education spectrum. I think we’ve done some good things the last couple of years. We were a little late in getting our superintendent, Tommy Chang, on board. When we took over, the people at the Globe were editorializing “Keep John McDonough, don’t rush into a decision.” We didn’t rush. On the other side, if we moved a little bit faster, maybe we’d be further along. But, you know, I don’t think there’s one specific thing I couldn’t get done. I mean, we still have eight months to accomplish a lot. Being a mayor, you can accomplish a lot in six or eight months.

What do you lose sleep over?