The “Owner of the New York Jets” Is… Tom Brady, According to Google

An amazing glitch has people scratching their heads. 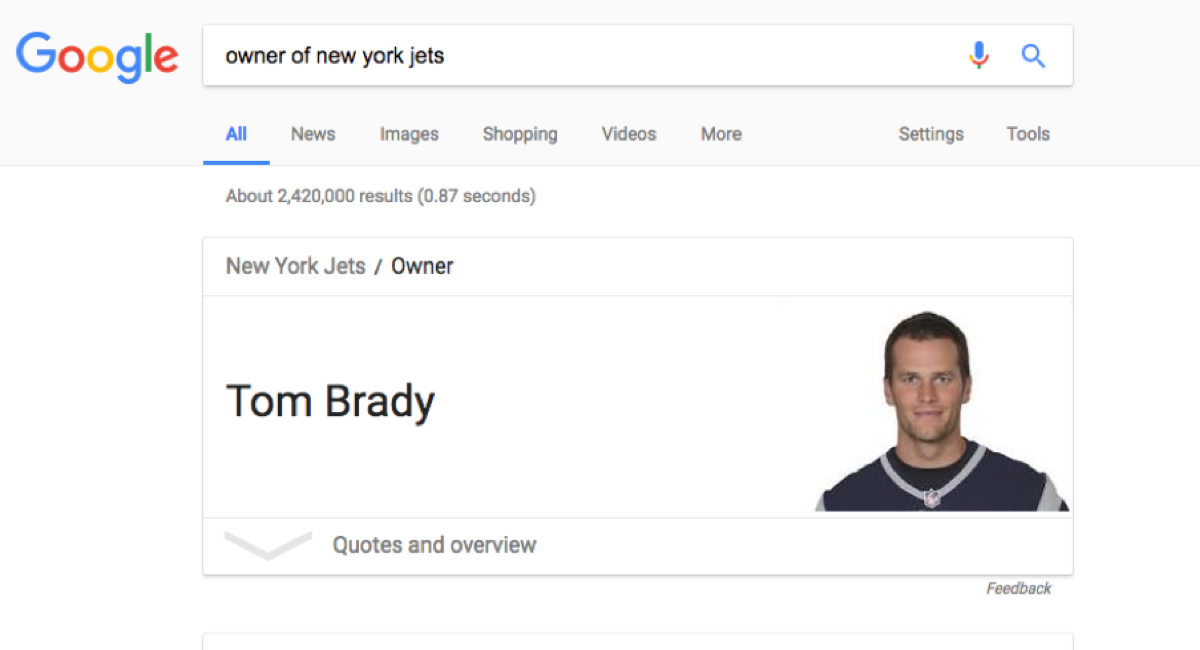 Update 3:40 p.m.: Looks like Google has fixed whatever was going on behind the scenes, and the search results have once again begun indicating that the owner of the New York Jets is not Tom Brady, but Woody Johnson. Why did this happen? It’s still unclear. A Google spokeswoman declined to comment.

Earlier: Please take a quick second out of your afternoon to type the words “owner of the New York Jets” into Google. An amazing surprise awaits you.

For whatever reason, according to the search engine, the owner of the New York Jets is the GOAT himself, Tom Brady.

Why, exactly, is the Patriots quarterback listed as such? It’s not exactly clear. Unless Google knows something we don’t, and Brady has been spending his Astin Martin and Shields MRI money acquiring the NFL teams in the off-season, it looks like it’s all just a weird, if hilarious, glitch.

Maybe a Google intern and Pats fan has seized the controls over there and pulled an epic prank. Maybe the robots running the algorithm at Google have crunched the numbers and determined that Brady’s 24-8 record against the Jets means it’s only fair.

We’ll let you know when we hear more.

In the meantime, if weird and speculation-inducing Google glitches is your thing, go ahead and try searching Google Maps for the Boston Herald. You won’t be disappointed.