By I'm a scraper
Religion 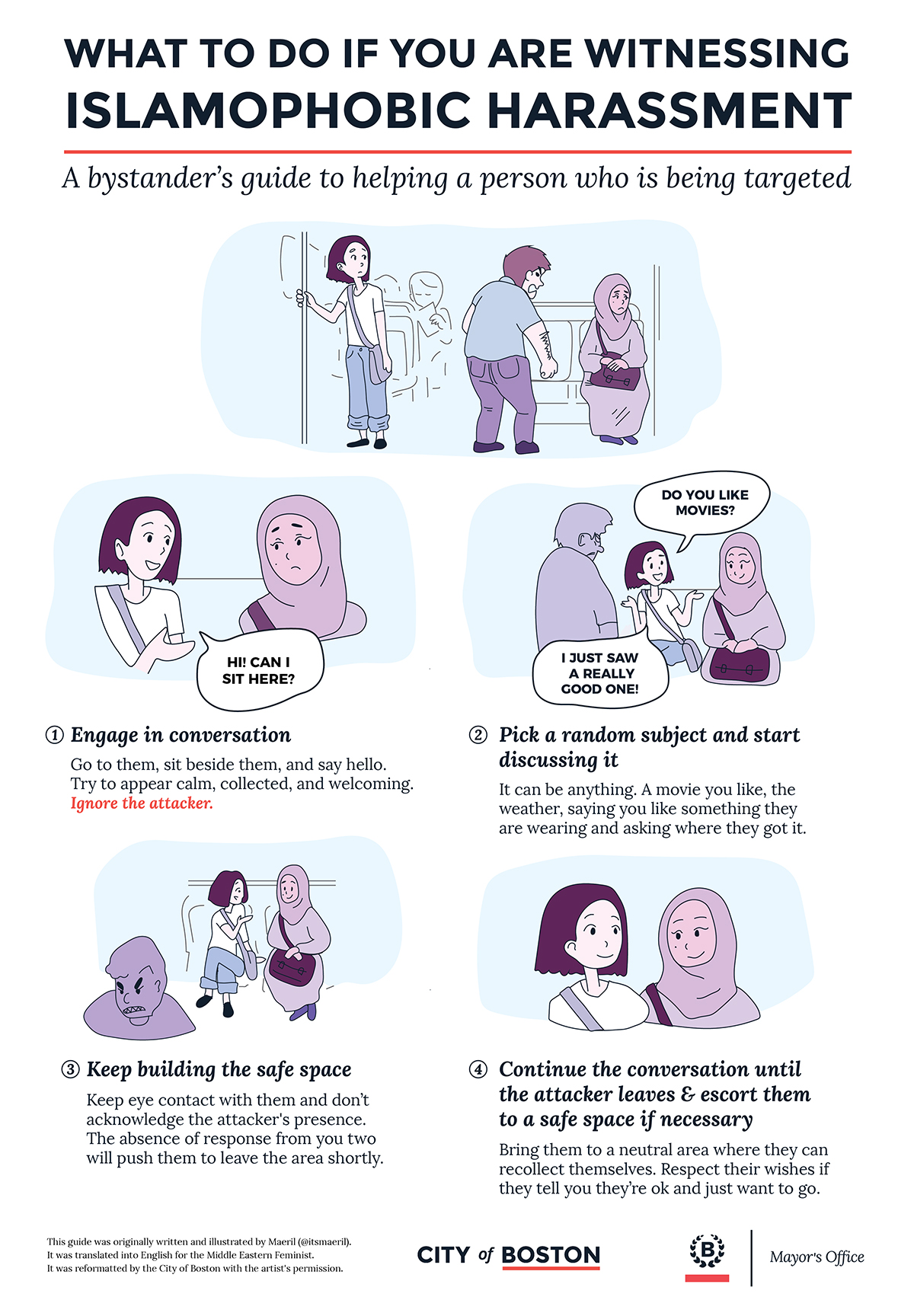 Photo Courtesy of the City of Boston and Maeril.

In 1976, Malik Khan came to Boston for his graduate studies at MIT, and he has called Boston home ever since.

Khan is a Bostonian, an MIT graduate, and a devout Muslim—a three-time president of the Islamic Center of Boston in Wayland, in fact. His family has been affiliated with the center since 1989, and his most recent presidential term ended on June 30. He is now the chairperson for the center’s maintenance and building committee.

But for Muslims all over the country, home isn’t always so welcoming. According to recent data from the Pew Research Center, 48 percent of U.S. Muslims report experiencing discriminatory treatment—including harassment and physical attacks—in the past 12 months. In Boston, reports of hate crimes targeting Muslims rose from 5 in 2015 to 19 in 2016, the Boston Globe reported, drawing from Boston police data.

Last month, the city launched a poster campaign designed to encourage bystanders to intervene—in a non-confrontational manner—if they witness Islamophobic harassment. Adapted from a cartoon by French artist Maeril, the posters provide a step-by-step guide to helping a victim of harassment. The tactic demonstrated on the posters is called “non-complementary behavior,” according to the city, a method that “disempowers the attacker by countering their expectations.”

Starting on July 19, the mayor’s office put up 50 posters around the city over the course of two weeks. The posters will remain on public furniture, such as bus stops, for about six months, according to NECN.

“There is a general feeling of insecurity in the Muslim community,” Khan says, adding that he’s seen a general increase in Islamophobic incidents in the past year.

Last December, the Islamic Center of Boston received a threatening letter, and he has spoken to community members who have experienced face-to-face harassment—one woman even told him she’d been accused of carrying a bomb while at a train station.

But, according to Khan, the Boston area isn’t as bad as other parts of the country. “This is a much safer community for us,” he says, and that is due, in part, to the city’s “forward-looking approach.”

“They’ve always tried to help out in any which way they can,” Khan says, and this recent campaign is an example of that.

“I think it’s a very meaningful and useful way of intervening if you are seeing something that is happening—to anyone, by the way, not just a Muslim,” says Yusufi Vali, the executive director of the Islamic Society of Boston Cultural Center. He adds that it’s a great way of “showing solidarity with them and making them feel safe and secure.”

As a Muslim Bostonian, Vali says he appreciates the initiative because “it really makes you feel that you are a part of the city and that…our mayor really serves…all people of the city, no matter where they come from, no matter what their faith is.”

Educating and encouraging bystanders to act is a tactic Vali’s and Khan’s respective centers have already adopted; both have provided bystander trainings in recent months.

“The presence of people who can stand up and know how to deal with these ugly situations can help diminish the occurrence of these incidents,” Khan says.

He praises the benefits of partnerships with law enforcement as well as interfaith and community outreach. His advice to other Muslims is to get to know people. “Wherever you work, wherever you live, make friends so that people get to know you, and once people understand who you are, they understand your perspective, you’ll be okay,” he says.

On a larger scale, the city of Boston can continue to help by addressing underlying contributing factors to Islamophobia, such as economic insecurity, Vali says. The election brought out hateful rhetoric, but “there was also a genuine pain,” and Boston has to address that, Vali says. “I think we’re at a very critical juncture of our country, and I think Boston has to continue leading the nation.”

Overall, Khan says he maintains a positive view of his fellow Bostonians. “Any group of human beings will have some people who are crazies or some people who are off the mainstream,” Khan says, but “by and large, the vast majority of Americans, they’re people of good will, they’re ready to support people who may be in distress, they don’t approve of Islamophobic things.”

He has experienced that firsthand. The day after his center received the threatening letter last year, about 30 people gathered outside to support their community’s Muslim population.

“Now, that was a very cold December afternoon,” Khan recalls, adding that a woman in her 90s—sitting on a wheelchair—was among the people gathered. Over the next few weeks, he says, the center was inundated with support in the form of letters, emails, and even a rally with about 1,000 people.

“The response that we got was tremendous,” Khan says.

According to the Pew Research Center, half of U.S. Muslims have had someone express support for them in the past year. In neighborhoods around the country, some of this support can be seen in the form of yard signs with affirmations such as “hate has no home here.”

And now, in T stations, it can be seen in these bystander guides.