Another “Free Speech Rally” Is Coming to Boston August 19

After Charlottesville, the city is on high alert about a right-wing demonstration in the Common. 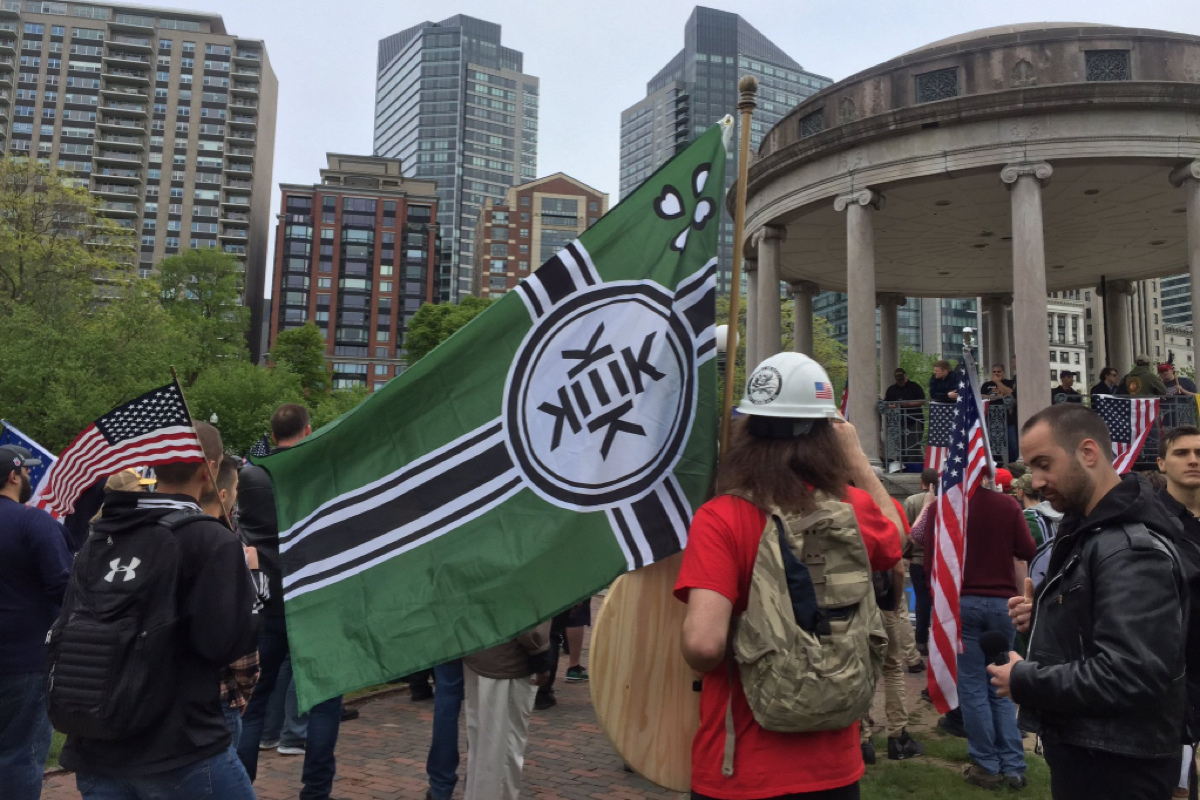 A Boston “Free Speech Rally” in May brought demonstrators to Boston Common. Photo by Spencer Buell

Update: Coming to Boston to protest the “Free Speech Rally” at Boston Common? Here’s what you need to know to stay safe and do it right.

Update: Organizers of the “Free Speech Rally” slated to be held in Boston this weekend have been issued a permit to gather on the Common from 12-2 p.m. on Saturday, and police are preparing for a large crowd to descend on the park.

Police will maintain a barricade between the rally attendees and what is expected to be a much larger group of counter-protesters, to keep both groups safe.

And Boston Mayor Marty Walsh says sticks, bats, and other objects that can be used as weapons—including flag poles—will be prohibited. He has also asked that attendees leave their backpacks at home, and said bags brought to the rally will be subject to search. Similar rallies around the country have seen attendees wearing helmets and body armor, and carrying items like shields and clubs, in preparation for clashes. BPD says it will soon publish a full list of banned items.

“We are going to have a zero-tolerance policy,” Walsh says, according to the Globe. “If anyone gets out of control, at all, it will be shut down.”

Rally spokesman John Medlar, who says he represents the Boston Free Speech Coalition, tells CBS the event has nothing to do with white supremacist demonstrations in Charlottesville, and stressed that although speakers initially invited to the rally have espoused racist ideas, he condemns Nazis and other racist hate groups. A post on the group’s Facebook page elaborates:

While we maintain that every individual is entitled to their freedom of speech and defend that basic human right, we will not be offering our platform to racism or bigotry. We denounce the politics of supremacy and violence. We denounce the actions, activities, and tactics of the so-called Antifa movement. We denounce the normalization of political violence.

A group of counter-protesters, who aren’t convinced, are recruiting protesters for a “Fight Supremacy” rally “to demand justice and stand in defiance of white supremacy.” Already, 8,000 people said on Facebook they would attend.

Update: After huddling at City Hall on Monday, city and state officials and law enforcement say they are prepared for this weekend’s divisive “Free Speech Rally,” pledged to keep attendees safe, and said there would be little tolerance for acts of violence if and when the demonstrators arrive in Boston.

Speaking with reporters, Boston Mayor Marty Walsh urged organizers to either cancel their plans, or to reschedule their rally to a later date, given the amount of emotion and anger stirred up by this weekend’s violence in Charlottesville. He also had words of warning for those who would bring the violence seen in Virginia to Boston. “We are a city that believes in free speech, but we will not tolerate incitements to violence,” Walsh said. “We will not tolerate threatening behavior, and we will stand in solidarity in a diverse community and a diverse nation, as we do every single day.”

Police Commissioner William Evans said his department and state law enforcement are expecting large crowds this weekend will join a “unity rally” opposing the demonstration, and that they would work to keep attendees safe and intervene should violence erupt. “We’re often thrust in the middle of protecting groups we don’t necessarily agree with,” Evans said. “And I think that can very much be the case on Saturday when this group comes to the Boston Common.”

Gov. Charlie Baker, who said he spoke with Virginia Gov. Terri McAuliffe, said the state will “do everything in our power to prevent any type of threat to this city.” When asked whether he would attend the “unity rally,” he said he might do so if his schedule allows.

The public is invited to sign a book at City Hall with messages for Charlottesville, and Walsh says that on Monday night the building will be lit blue and orange, the colors of the University of Virginia.

Meanwhile, many speakers scheduled to appear at the rally have backed out, including Proud Boys founder Gavin McInnes, and the divisive figures Augustus Invictus and Cassandra Fairbanks. Others have not indicated what their plans are, and at least one—Joe Biggs, of Austin, Texas—says he is still coming.

Update: Gavin McInnes, the founder of the “western chauvinist” men’s group Proud Boys and a featured speaker at Saturday’s “Free Speech Rally,” tells Boston Herald Radio he will no longer attend the event, and suggested other speakers might do the same.

Earlier: After a weekend of violence and white supremacist vitriol in Charlottesville, Boston is bracing for the return of a so-called “Free Speech Rally” on August 19, when right-wing protesters are expected to coalesce on the Common.

Organizers have called on supporters of various fringe, internet-fueled conservative causes to rally here, starting at noon on Saturday. A follow-up to a similar rally here in May, organizers say its purpose is to protest for the right to hold and spread even the most extreme views about subjects like race, religion, and feminism. Speakers at the rally, according to organizers, include Gavin McInnes, the founder of the “western chauvinist” men’s group the Proud Boys, and the provocative Massachusetts Senate candidate Shiva Ayyadurai.

Critics quickly billed it as a “hate rally.”

If you live in Boston you should be on the phone with city hall telling them to not allow a hate rally after people died today pic.twitter.com/l3KRP35TMC

By Monday morning, 150 said on Facebook they planned to attend the event, which was first announced weeks ago.

A counter-protest is also being organized. Already, more than 4,000 say on Facebook they are going, and 13,000 have indicated they are interested in attending. Organizers say they plan to meet at the Reggie Lewis Center in Roxbury at 10 a.m., then march to the Common “to demand justice and stand in defiance of white supremacy.”

Boston is an inclusive place for all. Hate will not be tolerated in our City. https://t.co/vSTWDDTHfZ

Gov. Charlie Baker also chimed in on Twitter. “Hatred & bigotry have no place here,” he wrote.

E Pluribus Unum – out of many, one. This is who we’ve been & who we must be. Hatred & bigotry have no place here. https://t.co/7TfQJ01Hpt

Walsh says his office is meeting with police to assess the situation and plan next steps, and will report back Monday afternoon. He said Boston has been “fortunate” so far not to see an outbreak of violence like what was seen in Virginia, and said he was concerned that protesters and counter-protesters in that city were able to get up close, and violent, with one another. He also says there’s still a lot officials don’t know about what’s coming our way this weekend. “We don’t even know who this group is,” Walsh says.

Boston Police spokesman Rachel Maguire says in a statement that “incidents of violence [or] inciting violence are not going to be tolerated at any events in Boston.’’

The rally’s organizers and some of its speakers, in interviews with the Globe, have denied connections to the protests in Virginia, and to white nationalism. But many of the same cast of characters will apparently be here. A Facebook page for Boston Free Speech claims that the influential alt-right troll known as Baked Alaska, who marched with the torch-bearers in Virginia and was hospitalized after being maced, will be in attendance.

The Globe has reported that the rally’s organizers have not had a permit approved to demonstrate on Boston Common, and that another group has already booked the Parkman Bandstand—where the last rally was held—for a picnic.

A similar “Free Speech Rally” held here in May attracted a few hundred demonstrators, many of whom prepared for confrontation by wearing armor and helmets and carrying sticks and shields. Standing around the Parkman Bandstand, they heard fiery speeches, including one from alt-right figure Kyle Chapman about the oppression of white men. Chapman is among featured speakers once again this weekend.

Kyle “Based Stick Man” Chapman: “They’re trying to destroy western civilization, and to do that, they’re going after whites.” pic.twitter.com/fhnO3S2NQu

While there wasn’t any explicit white supremacist iconography at the rally (as there was in Virginia) there was plenty of alt-right symbolism, like depictions of the cartoon-turned-hate-symbol Pepe the Frog, and the green “Kekistan” flags produced by 4chan users, the design of which mimics one flown by the Nazis.

Spotted: 4chan flag that is *definitely* not a Nazi flag. pic.twitter.com/0YYr76syVh

A group of anti-fascists (who go by the shorthand Antifa) wielding sticks also gathered in the Common to oppose the demonstrators. Both groups were separated by a line of police. Apart from a few minor clashes, the rally and subsequent march through Boston streets did not result in violence.