To prove he’s the best NFL coach who ever lived, Bill Belichick needs to win without Tom Brady—and he just might be willing to try it. 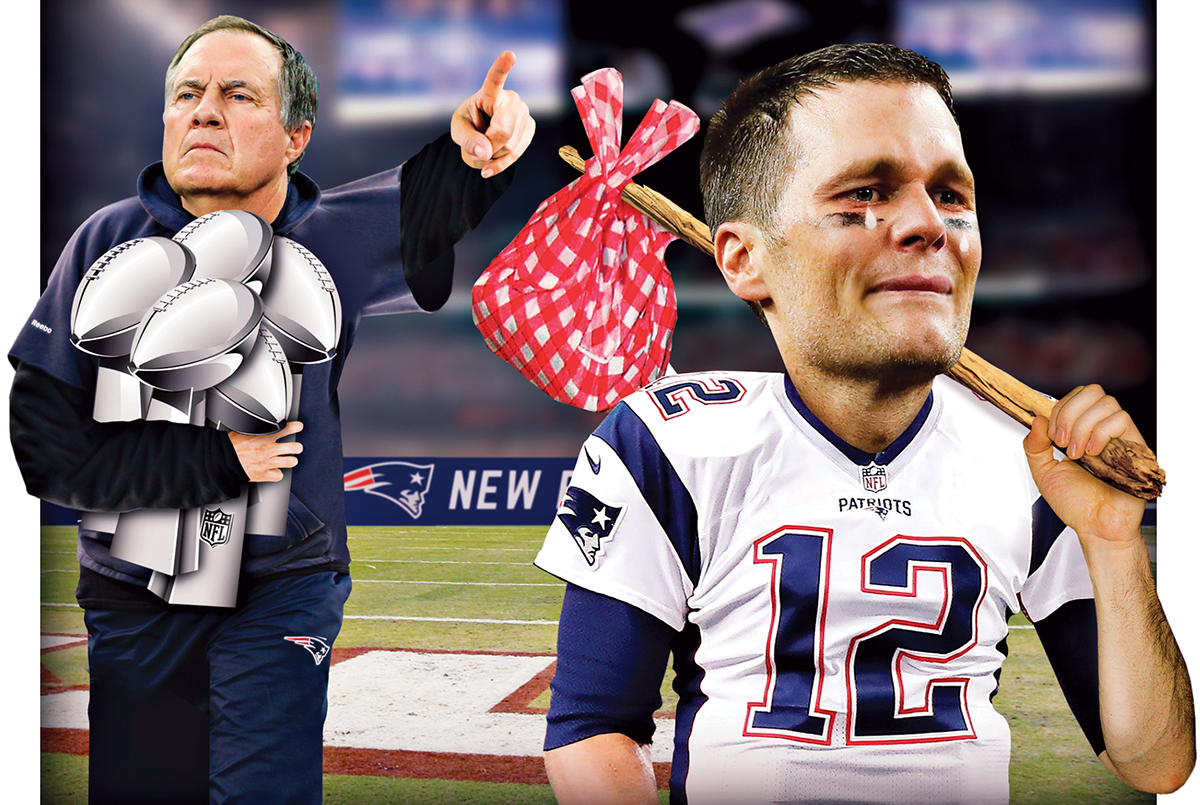 Hear that? It’s the harrowing hand of time ticking inside Patriots headquarters. Tom Brady is about to celebrate his 40th birthday. Jimmy Garoppolo, the quarterback heir apparent who turns 26 this fall, is rapidly approaching free agency. And coach Bill Belichick, who officially became a senior citizen this year, has only one thing left to prove: that he can win without trusty No. 12.

For years, there have been locker-room murmurs that Belichick won’t rest until he hoists the Lombardi Trophy sans Brady. After all, historians will rightly say, Belichick never won as a head coach until he landed alongside a sixth-round rookie named Brady—who turned out to be the NFL’s version of a winning Powerball ticket. Now they both have as many rings as the Olympic logo. To a man like Belichick, though, legacy matters, and this is surely one asterisk that he doesn’t want beside his name in the record books. “There was a time around the 2011 season,” longtime NFL reporter Greg Bedard tells me, “that people in the Patriots organization thought it was very important to Belichick. At that year’s Super Bowl, I asked a good team source if Belichick would retire if the Patriots beat the Giants. He scoffed and told me that he believed it was important to Belichick to prove he could win without Brady.”

If Belichick hopes to pull it off, though, he needs to strike now. Brady—try as he may—will not outrun Father Time. Quarterbacks simply don’t fare well in their late thirties, let alone after 40. Brett Favre fell off the performance cliff at 41. Peyton Manning’s body disintegrated at 39. John Elway and Joe Montana both reached the end of their careers at 38. All the avocado ice cream and prehab in the world can’t shield Brady’s body from the beatings it’s taken after 17 years in the NFL.

Enter Belichick’s chosen one: Garoppolo. Belichick drafted Garoppolo three years ago in the second round, higher than any other quarterback he’s selected. Plus, when Belichick had the chance earlier this year to trade Garoppolo for a considerable haul, he resisted. Why would the coach, who famously prepares for everything like a Naval Academy strategist, keep a backup quarterback approaching free agency if he thought Brady would be around past this coming season?

It’s likely because Belichick doesn’t believe in fairy tales. Which would also explain why he’s loading the team up with more talent than the Pats have had on an opening-day roster in years, including trading for young, speedy receiver Brandin Cooks. Sure, a big part of that is to surround Brady with the best possible players—and potentially send him off on a high note—but it’s easy to see that Belichick also wants Garoppolo to take charge of a team that’s stacked and can win right away.

And let’s not discount Belichick’s ruthless streak. Brady, perhaps more than anyone, knows it well, having seen his longtime coach part ways with kicker Adam Vinatieri and defensive tackle Richard Seymour. And remember how Brady got his job in 2001? Belichick abandoned franchise quarterback Drew Bledsoe. Could Brady really be next? His family doesn’t rule it out. As recently as June, Brady’s father publicly said that he’s ready for the day when Belichick gives his son the boot. “You just don’t know,” he told the Globe. “He could get hurt the second game. If they win the Super Bowl, does the organization let him go?”

Anyone who follows how the Patriots operate understands that Belichick doesn’t value individual players as much as he values power and leverage. When Deflategate broke, Belichick was quick to let Brady handle the mess. “Tom’s personal preferences on his footballs are something that he can talk about in much better detail and information than I could possibly provide,” he infamously said. This calculated cold-heartedness makes him a fabulous coach and administrator, and one who just might be willing to send Brady packing. And if we know anything about Belichick, it’s that he always gets his way.