Scenes from the Eclipse in Boston

The rare sight brought thousands out to the street. 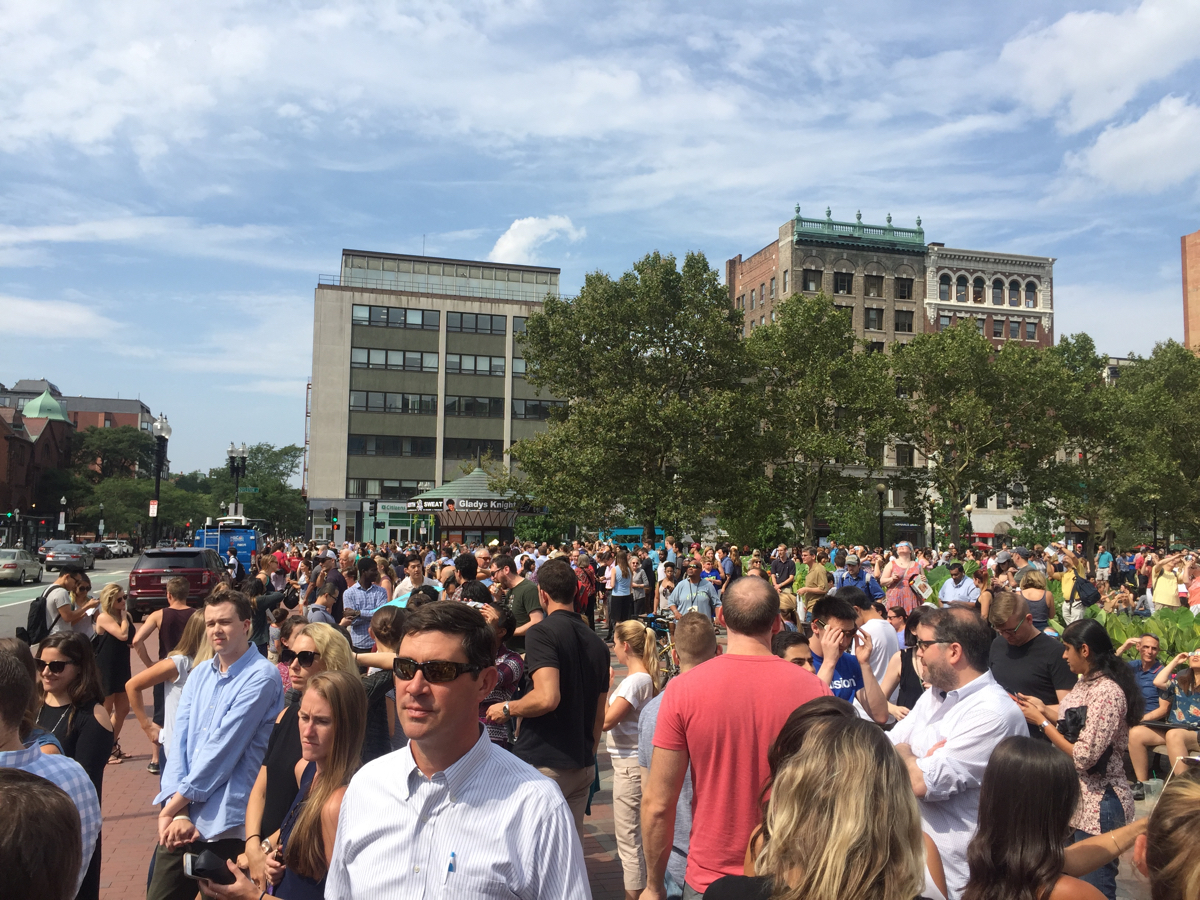 As the eclipse made its way through Boston on Monday, people took to the streets en masse to take in the rare and captivating sight for themselves. Under mostly clear skies, they peered into pinhole projector boxes, pressed solar viewer glasses to their eyes, or gazed at the sky with fancier equipment, while photographers set up special rigs to capture the sun’s collision with the moon.

In Copley Square, viewers lined the lawn and sidewalks.

It’s like these people haven’t seen an eclipse in years pic.twitter.com/6KNPMgPhW3

…Including the Boston team.

Your boy Keytar Bear is out here at Copley in an #Eclipse2017 inspired outfit. pic.twitter.com/0OGJajQoCv

Bart Foster, of Boston, brought a DIY solar filter he made with sheets of mylar film, which he attached to the lens of a camera that transmitted to his smartphone.

Bart Foster is here with a DIY solar filter on his camera, which is attached to his phone. You can just see the moon touching the sun. pic.twitter.com/r6rg3KDgO5

Lanhua Ma, a film production student at Emerson, is peering at #eclipse2017 through black and white film. pic.twitter.com/SDXh2ZOd7P

Some of the more popular viewing spots, like MIT and the Boston Children’s Museum, saw huge crowds.

MIT is ready for an eclipse… 😎 pic.twitter.com/3pGaV4sb6O

The GOAT also got in on the fun.

So did state Auditor Suzanne Bump, who shared a picture of herself going “old school” and peering into a pinhole projector made out of a box of Cheerios.

We use sophisticated #DataAnalytics to conduct audits but when it is time to watch the #SolarEclipse my office goes old school #MAPoli pic.twitter.com/rIpJ7tI87d

Some were moved by the weirdness of the experience of being surrounded by an entire city’s worth of people staring skyward.

Coolest part of the eclipse is by far the apocalyptic surrealism of thousands of people standing in downtown Boston staring at the sky pic.twitter.com/4EprshHQ0Q

Some incredible photos of the eclipse itself emerged after the action, like this one of a jet flying in front of a partially eclipsed sun.

In other news, a group of so-called “flat earthers” gathered outside MIT to protest.

Meanwhile, there’s a flat-earth society demonstration at MIT during the eclipse. @universalhub pic.twitter.com/ulpPRbWW7b