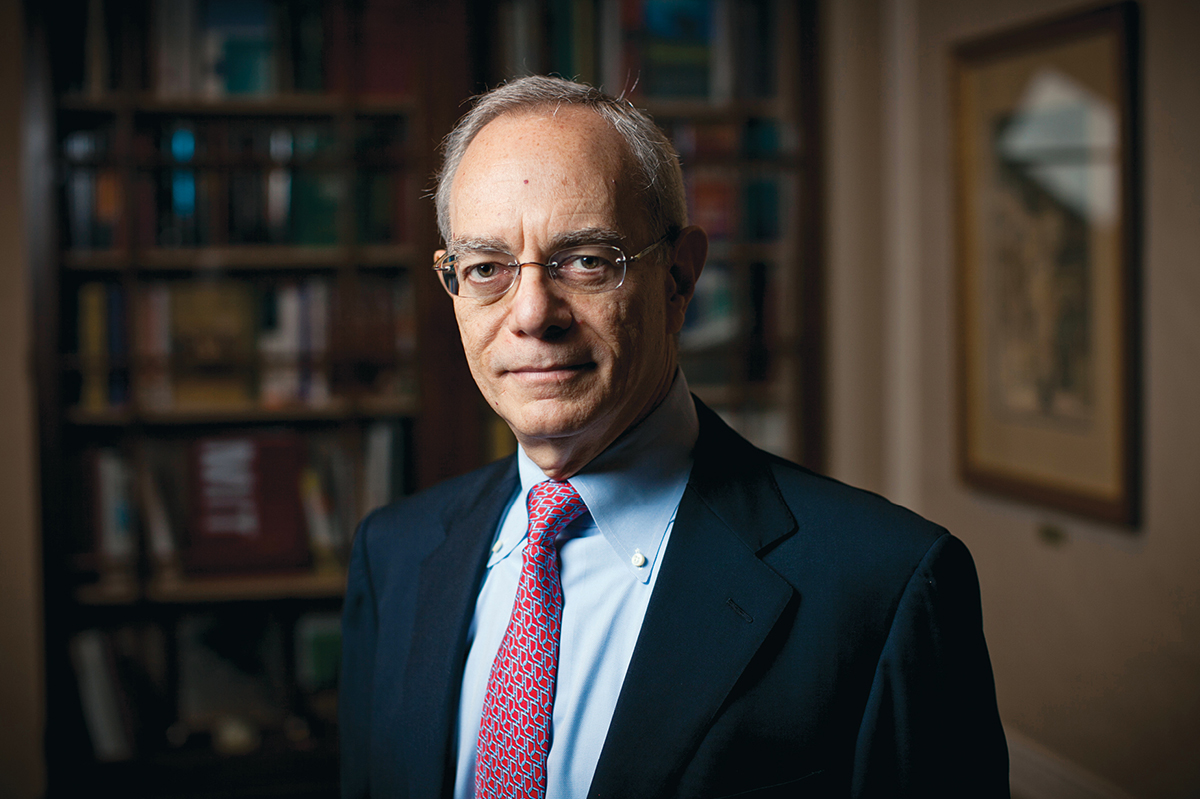 Perhaps more than anyone else in town, MIT president Rafael Reif lives his life on the bleeding edge. One moment he’s on the phone finalizing plans for the institute’s 14-acre, $1.2 billion expansion in the heart of Cambridge, and the next he’s chatting with professors on the verge of curing Alzheimer’s disease. There are business leaders eager to get on his calendar and politicians that Reif wants to sell on the benefits of science. Still, he found time to sit down with me inside his well-appointed office for a wide-ranging conversation about the latest tech, MIT’s rivalry with Harvard, and, of course, Donald Trump.

Does President Trump pose a legitimate threat to scientific discovery?

Clearly the early intentions of the White House with respect to science are not very bright. I think it’s concerning because it appears that there is not enough understanding of the significance of science to the well-being of the nation. And we’re spending time—I’m spending time, others on my team are spending time—in Washington, trying to explain that to people, particularly those who are new in Washington. They need to understand the whole ecosystem, and I don’t think any of them are coming from an environment in which they can see this ecosystem in action. Perhaps they are just not aware, and we just have to tell them and explain it to them.

Do you think it’s a lack of understanding, or is it a disdain for science itself?

I would like to think it’s a lack of understanding. I recently spent an afternoon in Washington with other technology leaders, and we spoke with some of the people in the White House. I found them to be receptive. I found a willingness to listen. But we’ll see.

What is the key issue that you want Trump and his advisers to think about?

Well, what would it look like if China became the world leader in that regard?

First there is the obvious stuff, like Nobel Prizes. But it means that the future Google, the future Amazon, the leaders in technology will be coming out of China. There is no question in my mind about that. It’s not just about the economy, though. Our military strength comes from science and technology. And the reason that we are the most innovative nation in the world is because of our investments in science and technology. We are America—we’re very smart and innovative, and we have the right tools. Give another nation the opportunity to prove to the world that they are also smart and innovative, and give them the tools, and they’ll be able to show that they’re as smart as we are, or smarter. So the answer to me is obvious. But to me, it’s obvious because I live it. I see it in action. If someone doesn’t live in this environment, how on earth do they know how it works?

From the outside, it seems as if you could walk into any lab at MIT and see something that could change the world. What are technologies being developed right now that you’re really excited about?

There are a thousand. That’s a huge privilege of working here, just walking the corridors. There is a neuroscientist here, Li-Huei Tsai, and her team is working on Alzheimer’s disease. She’s one of those brilliant people who one day may get a Nobel Prize. And in studying how the brain works, she and a few colleagues found that by flickering LED lights in the visual cortex of laboratory mice, the plaques that you find in Alzheimer’s—which are responsible for the disease—stop growing and start reducing in size. Now it works in laboratory mice, but will it work with humans? Well, they started a company to do human trials. So let’s see where that goes.

Anything else that you’re excited about?

Two or three years ago, a colleague named Vladimir Bulović wanted to see me. He shows up to my office and sits right where you are seated, and he takes a piece of paper he had folded in his pocket and connects it to a light bulb, and the light bulb turns on. “What on earth is this?” I asked. To make a long story short, he invented a way in which he can coat anything in thin, flexible, transparent solar cells. That piece of paper was essentially turned into a solar panel. He can take your iPhone, coat it in this material, and power it with the sunlight. Just imagine covering the windows or walls of a building in this material. Now they are a company in Kendall Square and working to make the membrane on larger scales.

Is commercializing technology often the hardest part? Is it easy to invent something when you have access to MIT resources, but hard to take it to market?

You need risk capital. In America today—and globally, but America leads—risk capital has been invested in the last 10 years, perhaps even 20, much more intently on ideas that take a short time to know if they will succeed or fail. So most of the money is going to those ideas, because if investors know it’s going to fail within one year or two years, they can quickly pull the plug.

Is that why so much venture capital funding goes toward finding the next killer app?

Exactly. Apps are a great example. That’s why people are chasing the next Ubers, the next Googles—because that’s where you can make a ton of money, or at least cut your losses. If you look into Alzheimer’s, well, that’s a different story. If you look into energy-storage devices, well, that’s a different story. Those are things that we need in society, but they take a while to develop. And that’s where we have a problem in this country, in which patient investors are few and far between. This is why we created the Engine, a startup accelerator that helps fund these types of projects. The Engine is not just for MIT. It’s to capture ideas from all universities—throughout the region.

Speaking of the region, MIT is changing the landscape of Cambridge more so than any other company or institution in town. And now the institute is embarking on a massive 14-acre redevelopment of the Volpe Center. How do you drive development while remaining a good neighbor?

The most important part is that we want this area—and this is why Volpe is so important—to be a place where you don’t just come to work and go home. I want this to be a place in which you work and you live and you play. This is not about just building offices or innovation centers. I want to enrich the environment with parks and green spaces and housing units, as well as reduce the pressure on the city for housing.

In recent months you’ve been vocal about Trump’s attempted immigration bans. Do you think his immigration policies pose a direct threat to Boston and Cambridge, given the higher ed and research communities?

Yes, I think that’s a serious threat. There is no question that governments must protect our cities and citizens, and having secure borders is part of this. But at this institution, at MIT, 40 percent of our faculty is born abroad. They’re making their lives here. I’m one of them. Forty percent of our grad students are born abroad. And I would argue that the 60 percent of domestic students benefit greatly from the 40 percent of international students. Stopping people who want to come here to make a difference in the world is an extremely risky proposition.

You’re among the 40 percent of faculty not born in the U.S. When you were a young scientist in Venezuela, was the end goal always MIT?

[Laughs.] MIT was a dream, not the end goal. As a college student in Venezuela, MIT faculty wrote some of my textbooks. We didn’t have money to buy textbooks, so I just borrowed them from the library, but they only had one or two for students and we could only borrow them for a day or two. So for me, taking a book written by someone at MIT was like touching the Bible for a religious person. I never imagined that I could end up in this place—and now we are creating digital education tools so that people like me, who are in Venezuela right now, can directly access an MIT professor’s course.

When you look at how much college tuition has gone up, and at how much debt families and students are saddled with, do you ever think that the higher education system is broken?

MIT is fortunate because we can offer significant financial aid, but only a few institutions in America can really do that. I’m hoping that digital educational tools can help, but the person-to-person residential approach to learning will always be better. It’s just much, much more expensive. To educate an undergraduate, it costs us north of $80,000 a year. Why? Because it’s expensive in terms of not just the people, but the facilities as well. Our tuition is north of $40,000. So our tuition does not cover the cost of educating a student.

Massive open online courses have been around for at least five years at MIT. Are they gaining any traction?

We’re learning how people learn so that we know how to use these tools and how to combine them better. So right now we’re using blended learning. We’re using digital tools to teach on campus in addition to having the person-to-person interactions. At the same time, we’re trying to make digital learning the best it can be and compete with the residential program—that’s the inexpensive way to reach massive numbers of people.

What is one field of research that you see really taking off and changing society in the coming years?

I think we’re about to experience a huge revolution in the use of machine learning. At MIT, we have a number of scientists working on artificial intelligence. And what they’re doing is trying to understand how humans think and trying to see if there’s a way to build a machine that can think the way we do. Related to that is a variation of artificial intelligence, or an aspect of it, which is machine learning. This is not a machine that thinks the way we do, but a machine that can do things that can help us do our jobs. For instance, maybe machine learning can help read and analyze MRIs at a hospital and find things that a human eye just cannot find. The application of machine learning is about to explode. I expect that in five years there will be huge changes to how we do life-sciences research and how it applies to medicine.

Harvard is down the road. Obviously there’s a lot of collaboration, but at the end of the day, do you see MIT as directly competing with Harvard?

Yes and no. Of course we compete in the sense that we have students who apply to MIT and apply to Harvard and they get admitted to both, and then they choose which one is better for them. We also compete for faculty. So in terms of talent we compete. But in terms of the bigger picture, when you’re in Beijing and you look at this area, MIT and Harvard look very close together on that map. When people globally try to compete with the Boston region, they don’t view just one institution; they view this collection of institutions. What they are thinking is, “How on earth can we create what they have?” And the Harvard of today and the MIT of today are doing lots of things together. We may have different geographical locations in Cambridge, but in the virtual world, we’re in the same place.